Julie Wood was the lead character in a series of French graphic novels, set in 1970s California.

The Wood series had eight GNs. Here I’m going to cover the first hree – those in the first volume of the collected edition. These were originally published in 1976-77.

The Julie Wood series is relatively low-flash, with a mix of older-TV-series-like drama and realistic moto racing. The primary draws are the view of the 1970s Californian moto racing scene (which seemed even more glamorous to European readers), and a shedload of lovingly-drawn period bikes, cars, landscapes and street scenes.

Wood is in excellent physical shape, with sharp reflexes and good endurance. She’s also deceptively strong. Despite weighing 55Kg, Julie can fluidly operate her Bultaco, which weighs at least twice that with fuel.

She is also a gifted motorcyclist – but within the limits of what you can realistically expect from a teenager. She has an agile, supple riding style.

On the other hand, she doesn’t have any brawling experience or killer instinct. She’s not a fighter.

On the gripping hand , she’s determined – and difficult to intimidate.

Julie Wood is familiar enough with moto mechanics to help prepare bikes for races, but doesn’t seem to be a full-on mechanic.

Julie is an unusually attractive lass, in a slim Californian blonde sort of way. This draws a lot of attention, especially in the macho world of biking races. Which isn’t usually a good thing.

During these graphic novels, Julie rides :

As it happens 1976 saw the release of one of my favourite Aerosmith songs. Parts of the lyrics fit the stories, and though it certainly sounds like 1976 it aged well.

The three Wood siblings lost their parents while they were still children. Their mother’s brother, Uncle Chris, took them in and raised them. He lived near Acton, California, 40-ish miles away from Los Angeles.

Chris Wood ran the small Ford dealership there. He sold and maintained cars, trucks and farm equipment – and pumped gas.

Chris intended for the kids to operate his dealership once he’d retire. However, the two older kids Frank (then aged 17) and Julie (then aged 15) were instead fascinated by motor racing. Frank was nicknamed “Indy” as he dreamed of winning the Indianapolis 500 .

Julie was more of a biker girl, spending much time atop a dirt bike in the California desert. She usually ran with a pack of teenage off-road biking enthusiasts, the Dirt Diggers Club, who’d loan her wheels.

Soon after his 18th, Indy landed a job with an amateur driver, Bobby Young. This affluent man was racing cars in a number of categories, but had difficulties hiring a good mechanic. Uncle Chris grudgingly agreed to let Indy take this opportunity, and from there join a professional team. 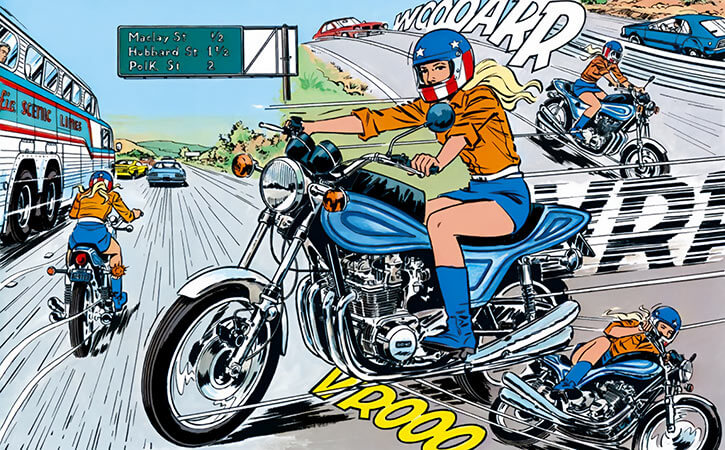 However, she also was caught in the machinations by Young’s enemies. They attempted to intimidate Indy away by threatening his sister. Eventually, during a fixed Formula 5000 race, Young was killed in an “accident”.

Furthermore, Julie’s first official moto-cross race as an amateur didn’t go well. The male competitors wanted her out, and forced her to crash until her Yamaha stopped working. She also drew the attention of one Gary Lanson, a rising star among young motorbike pilots – but also a shady bad boy figure.

(Julie being underage, she raced in the “Novice” category. These were only allowed to enter the race after the Expert riders, then the Junior riders, were on the track.)

Julie then entered the Baja Rally, a famous and demanding desert race. She ended up 25th.

This was a remarkable score for a Novice rider – especially since many competitors behaved badly. She thus caught the eye of legendary 1960s Italian rider Giacomo “Ago” Agostini , who was scouting to hire young talent. 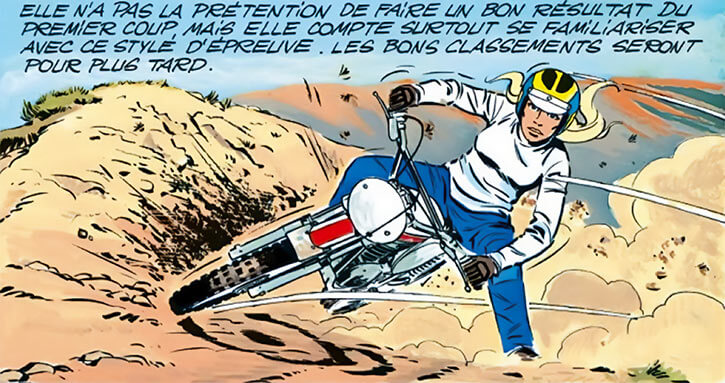 Sig. Agostini had just hired Gary Lanson, who suggested Wood as his co-pilot. Despite an early misunderstanding, Julie took the deal. Whilst the opportunity to be under Agostini’s wing was hard to pass, she saw Lanson as a thug. And she was a bit too young to know how to deal with her burgeoning attraction toward him.

Julie and Gary attended the 1977 Baja California race . This time it was the full thing, going around the whole peninsula. This 1,000-miles race was a major challenge, and back then simply finishing it was notable. Mr. Agostini also agreed to hire Indy as the mechanic.

(A bit like the Le Mans grand prix, the Baja is an endurance run where pilots take turns driving the same vehicle. A two-person team is thus needed, with the riders switching halfway through the race.)

However, before the race, a car deliberately rammed Lanson. Julie and Indy started rumours that Gary had broken his clavicle and was out of the running. This was a lie, but it succeeded in preventing further attacks.

Indy also entered the race, driving a modified Ford Bronco  that had been originally intended as the recon and support vehicle for the Bultaco.

Begin to eat the dust of Baja California

During the race, the Wood siblings came to understand that they were targeted by some sort of criminal. Unbeknownst to them, he was an enemy of the late Bobby Young. This man had never forgiven the Woods for helping Young win several victories despite his sabotages. 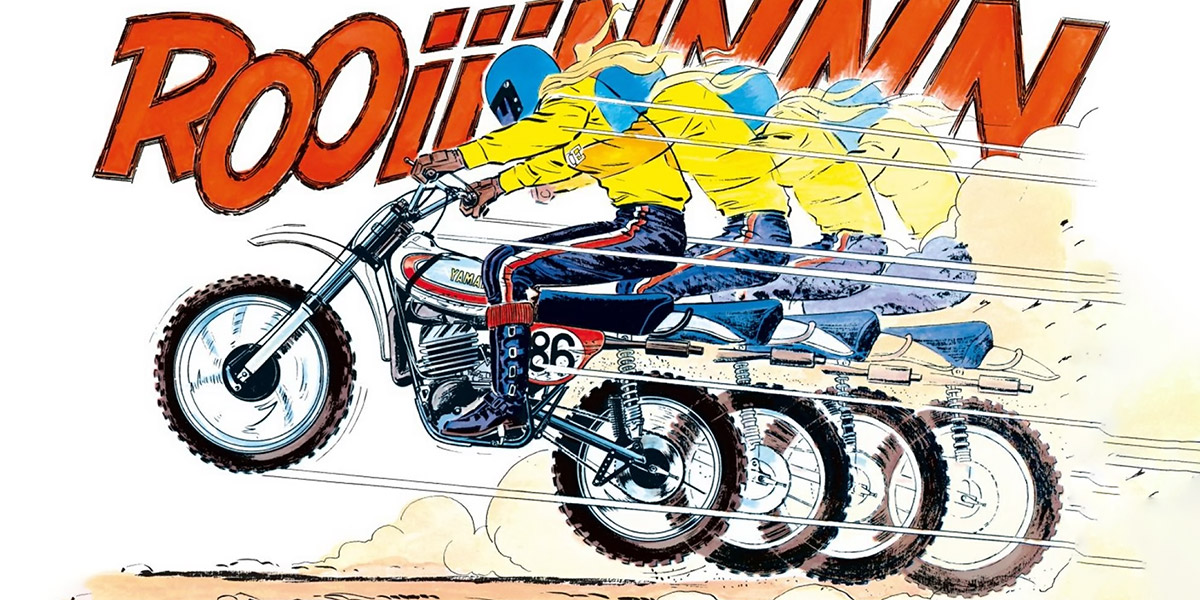 Famous and underhanded competitor Ronnie Walker had also been paid to make sure the Agostini riders would lose.

Walker engaged Wood in a lengthy duel in the Punta Blanca area. But even though she briefly crashed due to a violent sea wind funnelled by a canyon, she was dogged and skilled enough to catch up with Walker. Though Walker narrowly beat her, he now supported the Wood/Lanson team. He considered that she had earned her fair chance to win.

When Walker realised that another murder attempt would take place against Lanson, he intervened with Julie. They warned him and other competitors just in time to avoid being crushed by boulders.

Agostini’s pair of young riders won the merciless Baja race. This was the third year in a row that motorbikes beat cars and trucks.

Julie is a fairly quiet kid, and close to her big brother. She lives to ride, and dreams of becoming a moto racing star winning the Daytona 200 .

She’s well aware that moto racing is a closed, macho world that doesn’t want to let her in. At best she’s considered a sweet piece of behind, and many young racers would do something stupid rather than be beaten by a girl. Ms. Wood thus had to constantly steel herself, stay focused, ignore provocations, and face unsportsmanlike behaviour.

Julie *hates* the latter. She wants fair competition, but a fair chunk of the racing scene is about winning at all costs. This angers her.

She must also remain wary due to the sheer density of men openly lusting after her. Dudes, she’s *16*.

Connections:
None per se.

Drawbacks:
Age (Young), Misc.: Julie runs into frequent issues due to being a (gasp) girl. 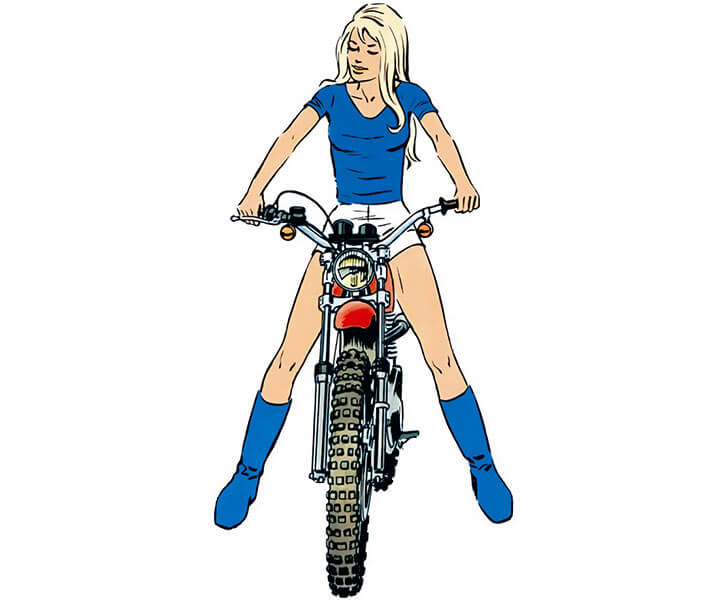 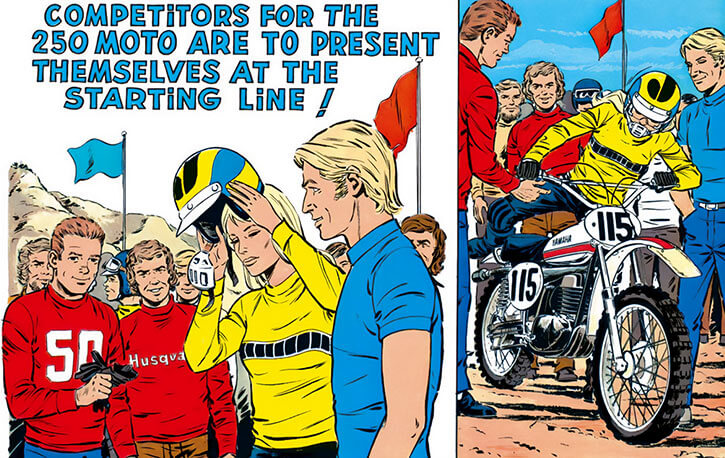 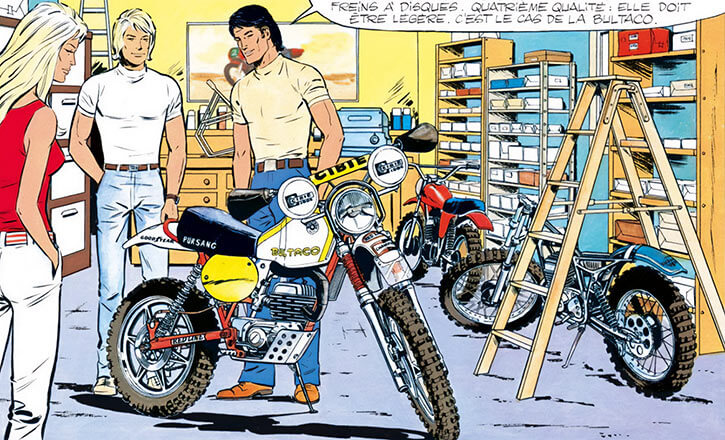