A genius geneticist, Covington developed genetic plug-in technology that allows her to use other’s genes to improve herself, giving herself an array of powers in addition to minor improvements to her physiology.

(Details of her time with the Thunderbolts can be found in the team entry).

June’s psychological problems were present from a young age, and she ran her father over with a tractor when she was 12. She managed to keep them hidden, until as a bored post-grad student at NYU she became infatuated with brilliant biologist Edward Wynne.

Wynne had a birth defect on his left arm which June was determined to cure. He rejected her cure after learning the methods she’d used to reach it, and had her thrown off campus for unethical practices.

She later approached Edwards claiming penitence, luring him to the underground lab she was abandoning. She injected him with a genetic plug-in she’d developed that paralysed him, and sealed him in the lab to die slowly.

Continuing her experiments, giving herself powers and leaving bodies in her wake, June was labelled the Toxic Doxie when discovered and arrested.

She was incarcerated in the Special Containment Centre, alongside other super-powered criminals, including Norman Osborn following his fall after the siege of Asgard. She was part of his group that escaped the prison, and when he gave himself up she infiltrated the Raft as a staff doctor who treated him.

Osborn recruited her onto his Dark Avengers team, having her dress as the Scarlet Witch. They clashed with the New Avengers as part of Osborn’s plan to discredit the Avengers teams, but were betrayed when Skaar was revealed to be a spy for Captain America.

Osborn’s plan fell apart, and the Dark Avengers were arrested.

When the Thunderbolts team were missing, the committee overseeing them recruited the captive Dark Avengers – Covington, Ai Apaec, Ragnarok, and Trickshot – for a covert mission to the Middle Eastern country of Sharzhad. Illegal, and highly immoral, the committee kept it from Thunderbolts leader Luke Cage. He learned about the other team anyway, and insisted on supervising them.

They performed the mission, betraying Cage. It didn’t work out as the committee had planned, threatening the planet, and the returned Thunderbolts arrived in time to take the team down and avert disaster. Incapacitated by their nano-leashes, the Dark Avengers were to be flown home by Warden John Walker, with Skaar as guard.

Covington wasn’t as subdued as she should have been. She forced Skaar to run riot in the craft, and it was teleported away by Man-Thing before it could endanger the Thunderbolts.

The Dark Avengers ended up in a Manhattan not their own. It was one where the city had been carved up into territories by insane super heroes who were engaged in a cold war. The détente was ended by their arrival, and most of the team were captured by Iron Man. 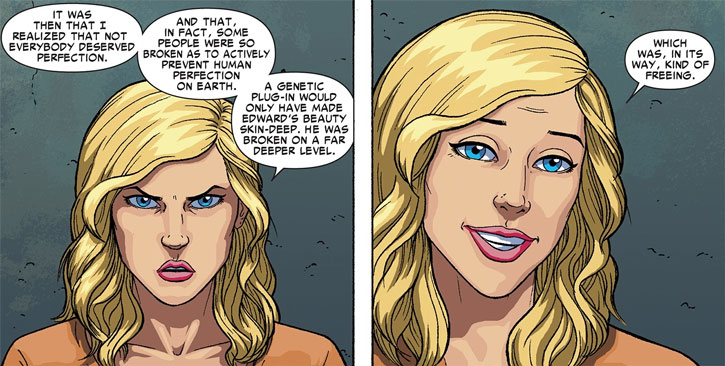 They became pawns of Iron Man, the Thing, and Doctor Strange, but fought back and managed to free themselves. While supposedly a prisoner of Iron Man, Dr. Covington freed herself and took advantage of his labs to operate on the others before waking them.

She removed the cybernetic brain from Ragnarok, and allowed his asgardian physiology to heal him; she shrank Ai Apaec permanently using Pym particles; and she restored John Walker’s missing limbs.

Walker, donning the U.S.Agent costume once again, led the team against the warlords. They discovered they weren’t in an alternate dimension as they’d thought, but an artificial dimension created and heavily manipulated by A.I.M..

They’d captured a sliver of time during a battle between the Avengers and Kang, and manipulated the artificial world to cause hostilities between factions so they could grab whatever tech was created there.

The team’s arrival caused instability in the dimension, and they barely escaped before it collapsed. The only objects recovered from it were copies of Thor’s hammer, which Ragnarok now wielded, and Captain America’s shield, held by U.S.Agent. They returned to the real world in the A.I.M. laboratory, which they destroyed behind them.

The still-shrunken Ai Apaec raged at Covington to restore him. Instead she stepped on him, likely killing him.

Striking out on her own, Covington did freelance work to fund her own lab. She took a range of jobs, from raising an army of lizard men for the warlord, Gongxian, to a Dutch eccentric who wanted his sweat to smell like parsnips.

When the Terrigen Bomb spread Terrigenesis over the world, Covington leapt at the chance to buy a cocooned victim. The sale turned out to be a setup, the cocoon exploding as soon as she got close. She survived, though injured, and dragged the still living subject out to find safety. 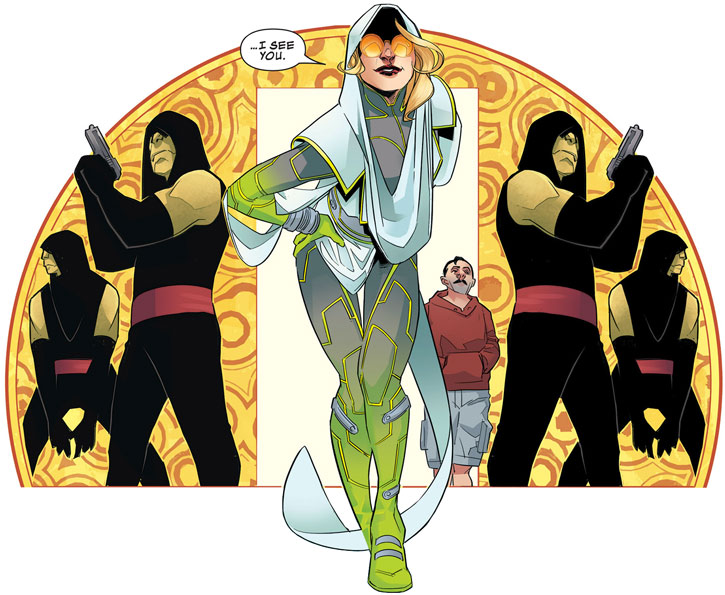 Donning a healing suit of her own design, Covington ensured her Inhuman, Mr. Schlickeisen, was stable. She found another genetics lab where she could work off the grid, killing the only scientist working there at that time.

Puzzled that someone would use a live Inhuman to deliver a bomb, she deduced his Inhuman gift must be invisibility to technology, making her attackers think the cocoon’s occupant was dead.

Covington excitedly worked on giving herself his genes, while having flunkies question the arms dealer who’d sold her the cocoon. He admitted he’d been given it by A.I.M. specifically to sell to her. Administering the technological invisibility gene to her flunkies, she led them raiding local satellite labs of the New York A.I.M. operation.

Their potential reinforcements neutralised, she attacked their main hub, both for revenge and the other cocoon they had. The attack was interrupted by the Avengers. They’d been led there by Spider-Girl, who’d been on the trail of Mr. Schlickeisen, her teacher.

Spider-Girl webbed Covington’s mouth shut to prevent her toxic gas attacks, her research having told her Covington had gills implanted which’d allow her to breathe. Covington was presumably arrested again.

A sociopath, Covington sees everyone around her as a potential source of genes to improve her. Her work consumes her, as she focuses on perfecting herself, and then society in general.

She judges others by their genetic perfection, and those she finds lacking a expendable. She often has little concern for her subjects once she has their genetic gifts, and may dispose of them to ensure the uniqueness of her own abilities.

“Taste my poison, Doctor. That’s my kiss of death. My gift to you. I wish this was a more serene environment so I could just sit back and watch your skin bubble and flail from your body.”

“Some backup would not be poo-pooed, Avengers !”

“Mother said, ’if the lord meant us to fly, he’d have given us wings’. Good thing for mother she was pretty.”

(To one of her captive gene donors) “There are things of yours I would very much like inside of me.”

“Before you answer, let me assure you, I understand that arms dealers live by a code of silence. Today you decide if you will die by it.”

“Bleed out everything else. Steal the tech, piss in the refrigerator and poison the potted plants. Mama wants to send a message.”

Equipment:
When damaged from an explosion she wore a healing suit to aid her recovery – Healing Suit [BODY 05, Regeneration: 01].

Dr. Covington has pioneered a technology that allows her to implant elements of one individual’s genes into another, copying any powers the individual may have. This requires a sample of the donor’s DNA, and a willing, or subdued, recipient. It can be handled as a Medicine (Enhancement) Dice Action.

She has performed numerous such surgeries on herself, and often sports new powers by this or other means. She has displayed vague powers that may be fire projection, and faked magical powers by implanted tech, but the impact of these are unclear and may simply have been special effects.

Initially she only had Chemical Attack and Kinetic Absorption. Her psychic powers were gained prior to the Dark Avengers becoming part of the Thunderbolts.

Invisibility was gained during the Inhumans outbreak.

During her most recent appearance she didn’t exhibit the psychic powers she had during her Thunderbolts time. And some of her early Dark Avengers powers never appeared again.

I gave her the powers I could make out (there are others exhibited that aren’t clear) but it’s possible some of her plug-ins don’t last as long for whatever pseudo-scientific explanation we want to use.

I considered only giving her Chemical Attack, since that’s always been there, and using Omni-Power for the other stuff (Powers then available for the rest of the adventure). But if one plugged in power has remained with her, there’s no reason to assume others wouldn’t.

Lack of use of them may just be her enjoying playing with new toys and ignoring the older stuff. 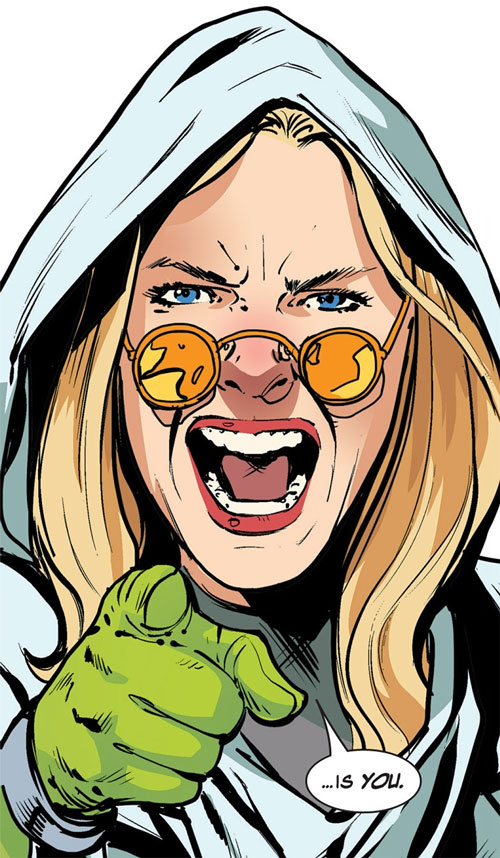 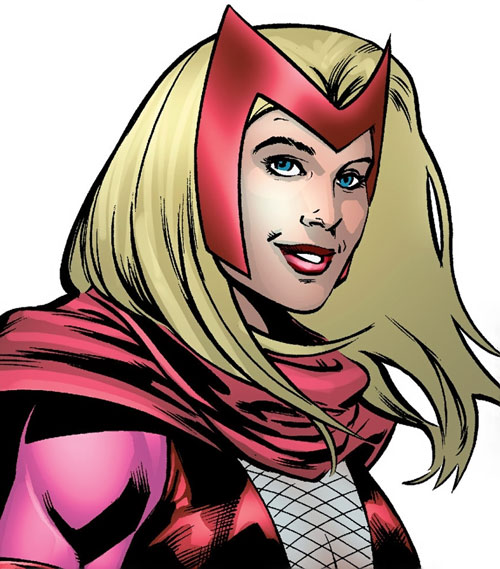