These comics were nonsensical and a parody of the absurd aspects of Silver Age  comics. They’re still fondly remembered for their goofiness.

She appeared in “Spider-Man Meets June Jitsui”, which was in Fantastic Four #213, among other places. Spidey is on his way back from the deli, when he runs into June Jitsui, “georgeous (that’s how they spelled it), but evil expert in karate, kung fu and other martial arts.”

She promptly opens up a can of whup-ass on Spidey, punching and kicking him senseless. Spider-Man remembers the Hostess Twinkies he bought at the deli, and pulls them out of his bag.

She doesn’t get the chance, as Spidey webs her to a tree. “Thanks to Hostess”, he says, “June won’t be bustin’ out all over for quite a while.” June thanks the web-head for the Twinkies, but says, “We’ll meet again.”. Spidey’s not sure if that’s a threat or a promise.

In 2009, June was seen in the S-Wing of an unspecified New York prison. Her name was given as June Hayashi, and she didn’t seem to have aged one whit. She briefly participated in an accidental breakout, but everybody was brought down using sedation foam.

Cute as a button ! She looks Chinese-American, with long black hair tied up in a yellow headband. She wears typical martial arts garb, kung-fu tunic and pants, and slipper-shoes – all yellow. On her left wrist, she wears two gold bracelets.

Obviously, she likes Twinkies so much, she patterned her entire wardrobe after them.

June seems to live to kick ass. She’s quite thrilled and smiling the whole time she’s battering Spidey, so apparently she enjoys showing off her martial prowess. 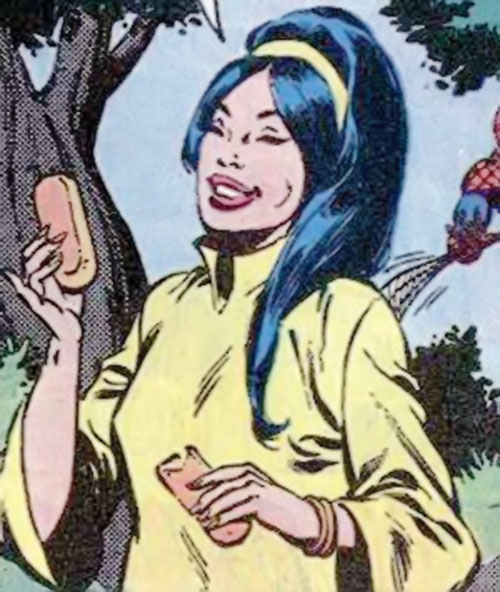 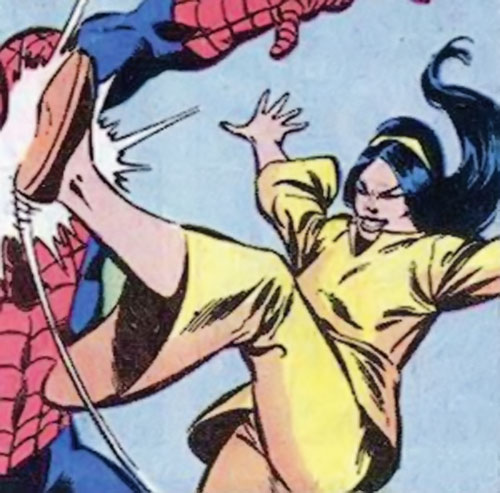