The Jungle Demon and Powerhouse are opponents of Fantomah.

Fantomah probably was the first super-powered comic book heroine, and was one of the features of Jungle Comics during the early 1940s. Yes, *all* the stories in these comics were about the jungle.

Before the transformation, this man may have been a Tarzan-like jungle adventurer. There’s nothing to indicate the great physical prowess of jungle lord-type characters, though, so our proposed game stats depict him as capable but sub-cinematic.

After the transformation, he developed a knowledge of the occult and herbalism, which he used to acquire an “evil eye” power. Looking at people and uttering a mantra would inflict enough pain to have most people pass out, and could affect large groups at once over a significant range.

This man is always accompanied by a gigantic constrictor snake he calls “Powerhouse”. By “gigantic”, we mean “can crush a four-stories building within its coils” size. This creature could comfortably fit within a Ray Harryhausen stop-motion monster flick.

Why Powerhouse was such a monster is not explained, but it seems that there’s an entire (if very rare) species like it.

It is vaguely possible that this man was a low-key mutant with an “animal friendship” empathic ability. But if so, it stopped working while he was the Jungle Demon.

This story happens in “the jungleland” of Fantomah, a mishmash of 1930s colonial imagery from various continents — see our Fantomah profile for more.

This character was a White baby boy who somehow ended up in “the jungeland” alone, floating on a lillypad. Oddly enough, a gigantic constrictor snake decided to adopt the boy, who grew up in the jungle under the reptile’s protection.

He was a kind and friendly man, popular with the locals and with a rapport with many jungle animals.

However, in 1940, he accidentally ate rare berries that made him eeeevvviil.

Welcome to the jungle, it gets worse here every day

Now named the Jungle Demon by locals, the man went on a campaign of terror and pillaging to steal the vast wealth of “the jungleland”, backed by his faithful snake monster.

He used this wealth to hire many natives and dig even more gemstones from the jungle’s rivers, though he then forced them to work without pay.

The abuse grew until Fantomah could intervene. She paralyzed Powerhouse, forced the man to eat special leaves that undid the effects of the berries, and exiled them both to a high plateau in the mountains.

More exciting adventures of Fantomah in the next Jungle Comics !

When he became evil, the man took to wearing a sinister hat (kinda resembling a Pac Man ghost surrounded by red feathers) and painted bizarre blue blotches all over his body – as you do.

Like many Fantomah villains, the Jungle Demon was driven by overwhelming greed, and contempt for the local population.

Perhaps the Jungle Demon fought Shanna the She-Devil during her early career.

If so he would have been a foreign doctor who came to Dahomey  as part of an humanitarian effort, but started doing drugs to cope and eventually did a dose that was laced with an evil mystical compound (Just Say No !).

The mystical compound might be Seth-related, and have also enabled the mutation of the doctor’s pet snake into a giant monster.

The stats are based on very little – this is a short story without sufficient data to gauge the character. But these are reasonable, working numbers. 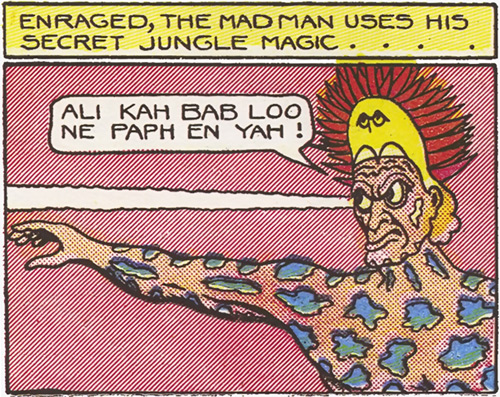 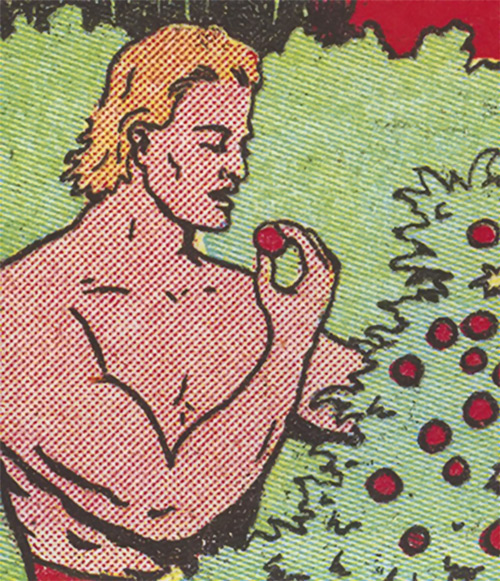