“Such things are heard of… young babies lost in the jungle and brought up in animal surroundings !”
– Robin (Richard Grayson), who read a lot of ERB.

Jungle-Man is an obscure Batman character. He was encountered but once, in an unremarkable 1963 story.

He openly is a member of the Army of Tarzan ExpiesFictional character heavily based on another character. Which over the decades has occupied significant swathes of comic book wilderness.

We occasionally profile such so-so characters. Since you never know whether this might spark ideas among our teeming millions of readers. What *did* this guy become after the story ?

Tommy Young possesses a powerful physique. He is strong enough to bend steel bars with his bare hands.

He seemed to be an adept hand-to-hand fighter and athlete, but not a spectacular one.

He also has a seemingly superhuman rapport with charismatic African megafauna. Lions, rhinos, elephants, big snakes, etc. like him and will easily collaborate with him.

Jungle-Man can even talk to them – he yells nonsense and the animals do what he wants them to. Yes, even felines. 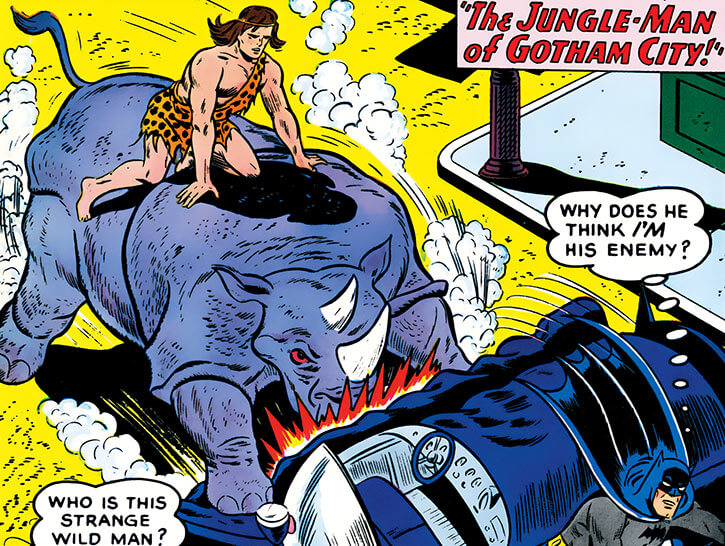 Tommy Young was lost as a child in an unspecified African wilderness. His devastated parents eventually came to live in Gotham City.

(The story never specifies which country. Though it would make sense if it were an English-speaking area.)

(The 1963 story states that Tommy was lost 15 years before. This corresponds to the start of African decolonisation dynamics, though most independence struggles weren’t successful until the 1960s. So perhaps his parents saw the writing on the wall and emigrated, but lost the kid in the fray.)

As per the well-trod ground of Anglo children being lost in the jungle, Tommy became a powerful low-tech adventurer able to command the native wildlife.

He was based in a large jungle cave. The cavern’s aperture, disappointingly, didn’t look like a skull.

(This tradition really starts with Tarzan of the Apes in 1912, of course. But by 1936 (with The Phantom and the Golden AgeSuper-hero comics from the late 1930s to the early 1950s version of Ka-Zar), the whole “White master of the Jungle” thing became a major genre in comics. It lasted until the late 1970s).

(“White queen of the jungle” characters, such as Sheena or Nyoka, were also popular from the 1940s onward. And then of course there’s Fantomah, but she’s special on every level.)

He and his mob launched a plot where he cosplayed as Batman, and harassed Jungle-Man. The mobsters pretended to be his friends, helping Young against “the bad man”.

Once the naïve Mr. Young had been thus primed, they took him to Gotham. They stole some large animals from the zoo, and now relied on “the jungle man” to protect them against Batman (Bruce Wayne) and the police.

The plan was generally successful. But Batman deduced Tommy’s identity, contacted his parents, and showed him his favourite teddy bear. Recognising the plushie from his childhood, Jungle-Man allied with the Batman.

Soon, the Mattock gang was arrested. As to Thomas Young, he was reunited with his family and adopted a middle-class urban American lifestyle.

Once raised to fury he seems hard to stop, but calming him down is easier than it looks.

“Bulla ! Bulla !” (which apparently means “hey, elephant I’m sitting on, please use your trunk to siphon water from that convenient barrel nearby, then impersonate a water cannon to disperse the police and gaudily-clad vigilantes chasing us in this alley.”)

Perhaps he’s an ancestor of the Monster-Master. 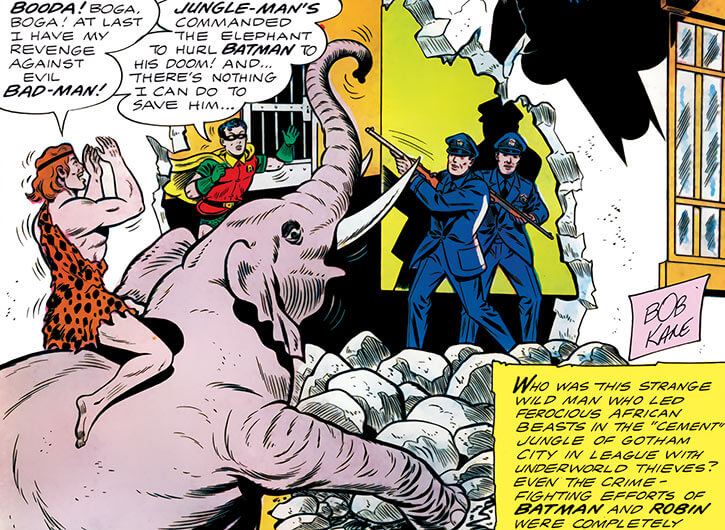 One suspects that Speak with Animals is limited to charismatic African megafauna, and afrophile Indian elephants.

Charisma is a Powered Skill, and can only be used on animals he can communicate with.

He might speak an African language.
In Gotham, Jungle-Man commanded an elephant, a rhino, a lion and a python. But these aren’t Pets, since he never took Dice Actions at the same time as the animals did.