Juni appears in Street Fighter beat ’em up video games. She is one of the Twelve Dolls of Shadaloo. It may be better to read their group profile first for context if you do not know about them.

An amnesiac super soldier with a tragic past can fit into many campaigns in many ways. Not only that, but her origin could easily be reset to a blank slate to suit the needs of the story.

Juni, like all the other Dolls, has been kidnapped and brainwashed into serving M. Bison.

In all likelihood she’s the most powerful Doll after Cammy, who’s a direct clone of Bison.

Juni has been more thoroughly brainwashed than the other Dolls. As such, she was deployed more often because she’s likely more loyal – and is more experienced.

Juni has been thoroughly trained in assassination. She is highly mobile and has amazing martial arts and acrobatic skills.

She’s also the only Doll who’s demonstrated the ability to teleport (albeit in a limited fashion). 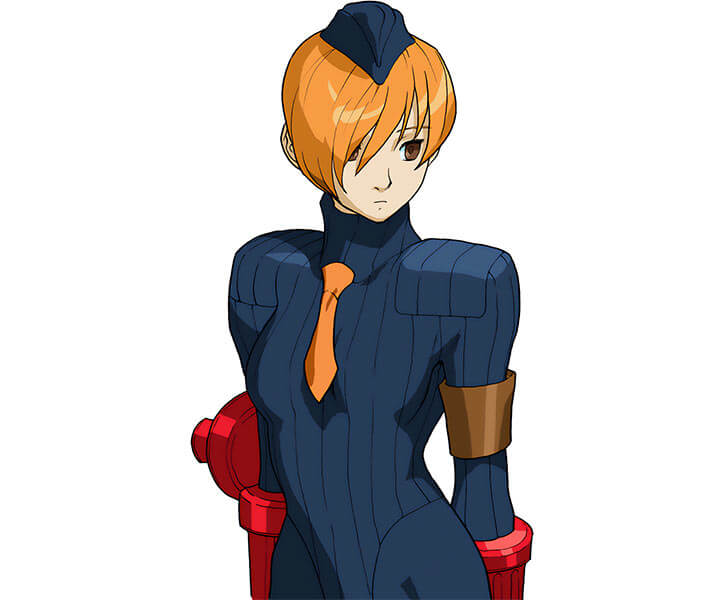 Juni was one of twelve 16-year-old girls kidnapped from around the world and infused with Cammy’s DNA. They were thoroughly brainwashed into unthinking obedience – which led to them being called “Dolls”.

The genetic material was indirectly Bison’s, as Cammy was a female clone of his. Which meant a potential for the Psycho Power. Their abilities all manifested in slightly different ways as they trained to serve Shadaloo.

Juni is German, and was the second Doll inducted after Juli. It is possible that the two knew each other before their abduction.

Juni was dispatched to find and capture Ryu. The specifics aren’t known, but she was unable to locate him. Yet Ryu was abducted early on in the game by Shadaloo, which may mean Juni found good intelligence.

She was then reassigned to work with her frequent partner Juli in hunting down Cammy. But once they confronted her, they were unsure how to react. Cammy had achieved self-actualization, having broken free of Bison’s mind control. She even convinced the pair not to kill her. The two Dolls returned to Bison and falsely reported that they had succeeded.

He initially congratulated them. But they started acting more independent, as Cammy’ awakening had started to trigger their own. Telling them that they were merely his playthings, Bison ordered them to kill themselves. 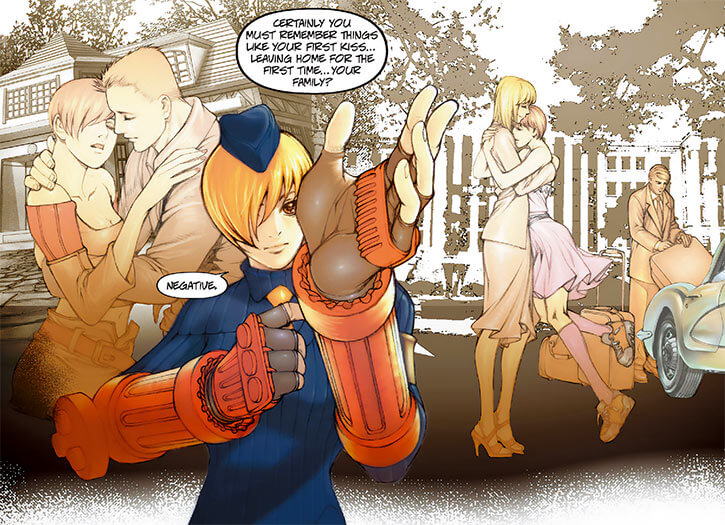 When they refused to comply, Bison attacked. This triggered their self-preservation instinct – as well as the other Dolls’ in a domino effect.

The fight went poorly for the Dolls. They were confused and disoriented – and mainly trying to defend themselves. Bison killed several, but Cammy came in and rallied the survivors.

Bison was eventually forced to retreat, as he couldn’t stand up to their combined might.

Bison would later be defeated by other Street Fighters, which also destroyed his base. Cammy nevertheless managed to use Bison’s Psycho Drive to restore all the Dolls, but they were still inside when the facilities detonated.

All 13 of them survived, but all were rendered amnesiacs.

(Yes, it’s an animated movie. But it was also produced by Capcom to drum up support for their upcoming SF4 console release, so it was and still is official canon).

Juri was sent by S.I.N. to retrieved Dolls in an abandoned Shadaloo base in the mountains. She mercilessly beat all twelve of them. Juli and Juni were the last two she knocked out. Juri then loaded them into her getaway plane, but was confronted by Guile, who had been tracking her.

She defeated him and the plane took off, but Cammy came in and managed to board. She engaged Juri, who used a restrained Juni as a ram. Cammy and Juni were forced off the plane, but the mountain snow broke their fall.

Juni was awakened in a hospital bed by one of Cammy’s cats jumping on her.

Cammy knew that Juni would likely have lost her memories. But she promised to help her as best she could due to her having a very similar experience. Cammy then departed to kick some Shadaloo butt.

Due to this encounter Juni would later take a strong liking to cats.

Juni started training with Cammy and the rest of the Delta Red unit, a British Intelligence commando. She became a friend of member Matt McCoy, who taught her cooking. Eventually, she was trusted enough to be left unsupervised.

Juni and Cammy were once attacked by Vega. Juni noted that Vega’s claw looked a lot like Decapre’s – implying that she had regained her memories.

The pair forced Vega to retreat. This incident strengthened Cammy’s resolve to rescue and rehabilitate all the other Dolls – just as she had for Juni. 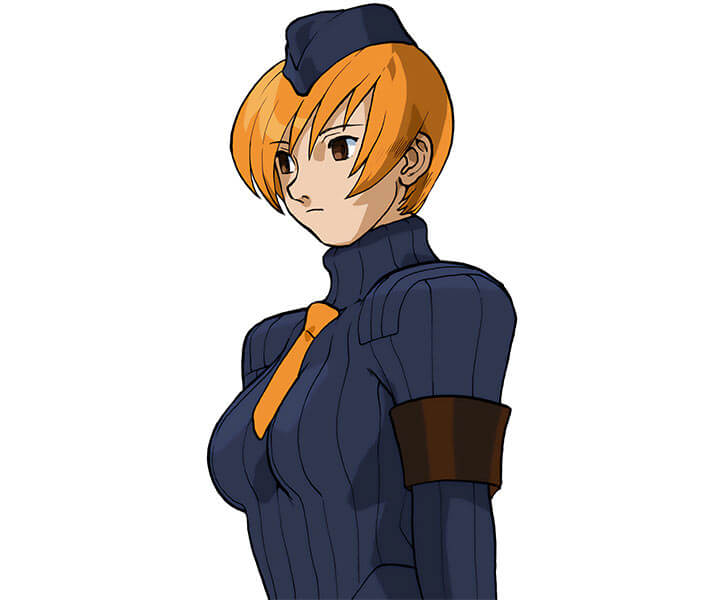 Juni was, surprisingly, the only Doll not seen in this storyline.

The implication would likely be that she hasn’t recovered enough to face her past and confront Shadaloo, but was still under the protection of Delta Red.

Likely still training with Delta Red to use her skill set for the good of others. And to try and find her place in life.

It also seems highly likely that she would get some cats for herself.

Juni is a teenage German girl around the age of 16. She has the body of a gymnast. Her hair is shoulder length with long bangs.

The uniform also has a funky yellow baby necktie.

Her casual outfit is a turquoise long sleeved blue dress with a white turtleneck underneath, a pink belt, purple stockings and dark thigh high boots.

While under mind control, she, like the rest of the Dolls, didn’t really have much of a personality. They tended to act and talk like robots.

This was doubly so for Juni who was considered to be one of the more brainwashed Dolls.

After breaking free she started exhibiting her own personality.

From what little we’ve seen, she’s a normal teenage girl who’s adjusting to her strange new environment. Juni is essentially starting over as a blank slate.

At this stage she appears to be a social sponge. She adopted her teammates’ interests, such as Cammy’s love for cats. 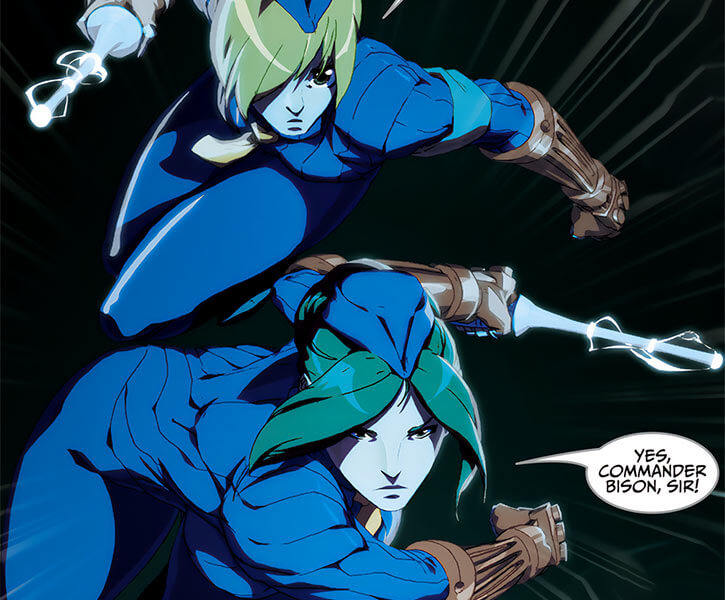 “Judged as an obstacle…commencing object disposal…”

“Target in view. 98% similarity between object and sample data.”

It’s hard to pin down a lot of her stats as she has limited appearances. For example, from the above block it’s unknown if she kept Detect, Recall, or Fighting Array and any of its bonuses.

During her Doll days, Juni had Telepathy: 02 with Bison only. And her Connections and Drawback were as follows:

In addition to receiving the benefits of the Fighting Array Schtick, Juni gains the following abilities when she is within 0 APs of her partner Juli (and quite possibly any of the other 10 dolls):

Helper(s): GameFAQs.com  (for everything that you ever wanted to know about the Street Fighter universe and more !), Sébastien Andrivet, Darci.