The surgeries she’s undergone haven’t left her as flexible as her father and brother. Furthermore, she can’t walk without crutches. Yet Alex has an almost superhuman level of manic strength for her size. She is able to twist a person’s head off one handed, and has actually taken down Bane in short order.

She usually carries around a pair of scissors. Using these, she snapped her brother’s fingers off before he could react.

Her main asset is her intense, and highly insane, force of personality. It can unnerve more powerful opponents. Using this, she managed to control crime along the American west coast with just a phone and a notepad.

The daughter of the original Ragdoll, she was named Alex as her father had wanted another son. It’s uncertain what kind of upbringing she had.

Despite being reputedly beautiful she developed serious issues with her appearance. These eventually led her to undergo seriously disfiguring surgeries (possibly trying to reproduce her father and brother’s abilities). Alex took to completely covering her body when she had to go out in public.

Her sanity deteriorating, she adopted the identity of Junior. Most, even those who’d spoken to her, assumed Junior to be a man. She gained control of west coast crime by doing unspeakable things to the loved ones of anyone who crossed her. 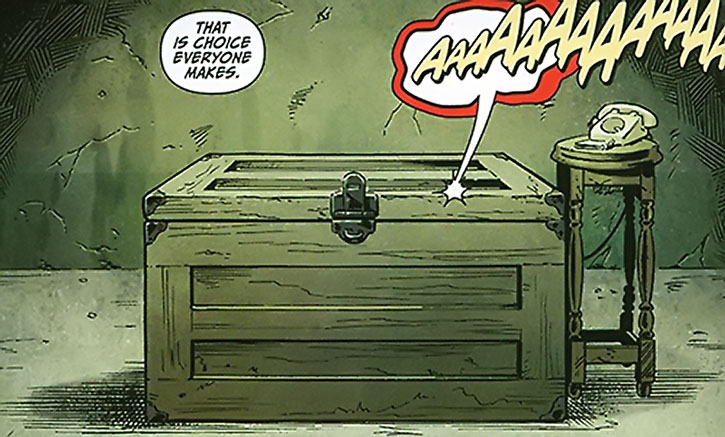 She lived in a succession of wooden crates, using only a phone and a notepad to run her empire. Her only real possession was a card she’d acquired by some means, on which was written in Aramaic “Get out of Hell Free”.

The card was stolen by the vigilante Tarantula (Catalina Flores), a former FBI agent who’d seduced Junior’s accountant. Before Junior could reach her, the Secret Six were hired to break Tarantula out of prison, where she’d ended up. The rest of the Six’s job was to recover the card, and take it to Gotham.

Offering $10m for each of the Six, Junior gathered a small army of super-villains who harassed them while Junior also followed. She caught up to them in Vegas, where she abducted Bane and proceeded to torture him for information.

Freeing one of his arms, he killed one of her enforcers Aaron. But Junior stopped Aaron’s brother, Tig, from retaliating. 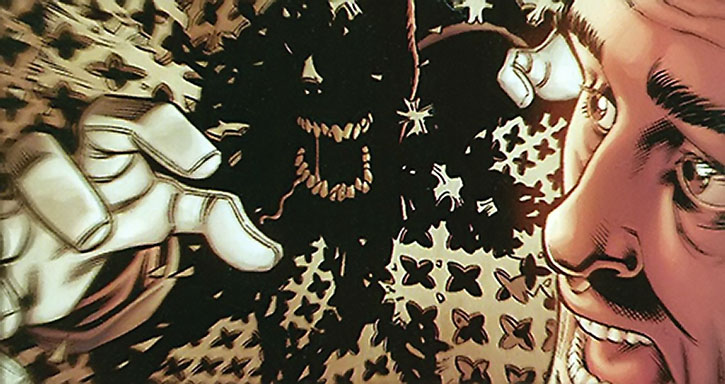 The rest of the Six soon caught up to them. Alex revealed herself to her brother, letting them leave with Bane but not relenting from her quest. After killing Tig, for having seen her unmasked, she followed them to Gotham.

She caught up to the Six battling the horde of super-villains on the bridge into the city. Junior waded in. Peter again offered her a truce, but she retaliated by slicing off some of his fingers with her scissors.

She died as Tarantula grappled her amid a flurry of blasts from the super-villains she’d employed, without the card.

Wildly psychotic and creatively vicious, Junior seems permanently angry (possibly due to the pain caused by her condition). She speaks in a harsh, clipped way, as though it’s painful to do so. However, when enraged she does so at length, which seems to further fuel her rage.

She has no hesitation in ordering, or performing, the most gruesome actions she can imagine to be carried out on the loved ones of anyone who crosses her. Indeed, she takes a kind of twisted satisfaction in doing so. She will force her victims to tell her to take their loved ones rather than them. Junior records this before killing them anyway, and then plays for their loved ones.

She believed the Card made her immune to repercussions from her actions. As a result, Junior became obsessed with recovering it at any cost when it went missing. She tried a back-up plan of getting a priest to forgive her sins in confession, but when that didn’t work she just killed him.

Hating the way she looks, Alex keeps herself obscured. She lives in a crate, and keeps herself covered in rags when forced to go outside. If someone should see her uncovered, she’s filled with a rage for the judgement she sees in their eyes, and will kill them.

She also needs everything around her to be ugly. For instance Junior won’t travel in fancy cars, preferring the ugliest one she can find.

Tig: “Boss ?”
Junior: “Finished. Will need garbage bag, cleanser. New crate.”
Tig: “Of course, you got it, boss.”
Junior: “Arrange parts in amusing fashion, his living room. Family should find him first, daughters preferably. Leave tape, him begging me to kill them instead. Believe they have dog. Kill dog.”
Aaron: “Ah, ah. Okay. Whatever you… whatever you say, boss.”

“Make them pay for helping her. Message to others. Stake them out in the sun. Cut them open. Make them drink battery acid. Fill their eyes with razors. Break them and molest them and stab them and burn them. Fill them with hope, and then take that hope cruelly away. Do that for me. Money. You will be paid for each drop of agony they suffer.”

Junior: “You’re looking at me. Do not. Don’t like it.”
Ragdoll III: “But… but you were… You were so beautiful, Alex. Everyone thought so.”
Junior: “Ugly inside, Peter. Like you. Like father. Just brought it all out where I could look at it.”

“Just want to do to everyone as was done to me. Man, woman and child. And film it.”

“They saw me. They looked at me. You looked too. Pervert.” 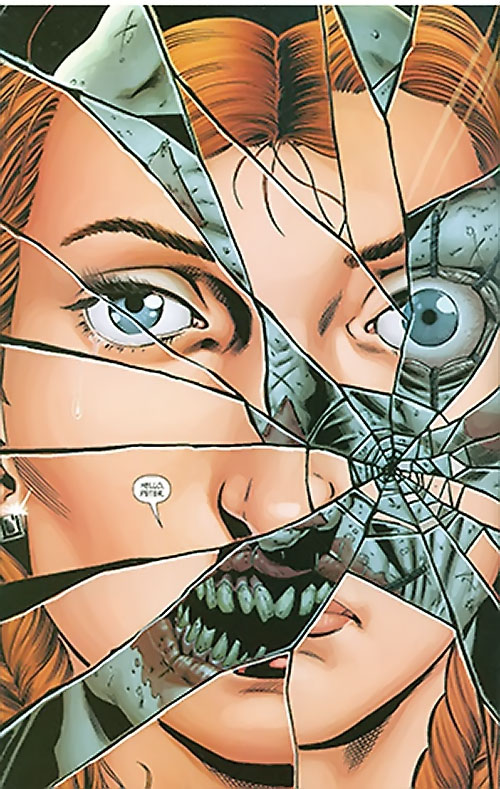