Juno is a powerful fighting machine and a terrifying opponent. He’s very well versed in Chinese martial arts, agile, strong and very tough. He’s also an expert in the use of melee weapons and his substitute hand weaponry. His appearance combined with his rough ways intimidates most opponents into obeying him.

His frequent use of the silvery pointed edged tip hand part makes him an extra dangerous opponent against vampires and werewolves.

The man only known as Juno originates from China. He first appeared as Dr. Sun’s second master henchman, after the vampire Brand had failed to defeat Dracula.

Juno was apparently employed and brought from China to Dr. Sun’s organization in Boston for the main purpose of killing a weakened Dracula in hand-to-hand combat.

Dracula’s other enemies Harker, Drake and van Helsing had recently clashed with Dr. Sun and had been defeated by him. They were kept around for the purpose of being the recipients of Dr. Sun’s gloating until the assumed defeat of Dracula.

As planned Juno defeated Dracula in a tough fight and burned him to ashes. The enemies of Dracula were put into a special cell from which Dr. Sun actually had planned they would escape from.

He knew they would bring the army back with them to end the world-treathening villainy of Dr. Sun, but, as by his plan, the army was put under Sun’s mental control as soon as they arrived, increasing his power base even further.

Juno was sent to deal with the non-hypnotized intruders. He wasn’t perceptive enough this time and got shot through the heart by Rachel van Helsing’s crossbow bolts. The company got away and Juno died failing his mission.

As punishment, the organization decapitated his dead body, which should be the last the world saw of Juno.

Juno is an extremely large man that resembles Lurch from the Addams Family  or Boris Karloff . He’s Chinese, bald and very scarred across the entire body, including the face.

Juno ordinarily is seen around with an ugly expression, a big metal tip on his left hand, a pair of brown shoes, a purple shirt and a blue suit consisting of a jacket and trousers. Around the waist he’s a very broad gray leather belt adding to impression making him look real dangerous and deadly.

If he’s been prepared for a battle he’ll be bare breasted (revealing a well developed muscular structure and scars) and wear a pair of trousers, a blue belt, the metal tip and a pair of shoes with metal tips (like Marvel’s Tarantula). It’s damn apparent that he’s a cinematic henchman…

Juno has very little personality. He always obeys orders perfectly and without hesitation and thus could be considered the ideal henchman. He wouldn’t betray his employer as he thoroughly enjoys taking orders from the boss ; more so in fact than any other henchman I’ve seen.

Juno’s English sounds odd as he has a strange accent to it.

He’s not particularly bright, often makes obvious observations and talks about himself in third person. He’s somewhat impatient often telling the boss that he’s ready (which any would-be world conqueror wants to hear !) and asking when he can return home to China (although not often enough to irritate the boss !).

“Come with me, or feel the point of the silver stake !”

“You will do nothing. Doctor Sun demands your presence, Dracula ! You will come with me, or die !”

“You ruined Dr. Sun, but Juno will claim vengeance for him !”

“Soon my silver stake will test the mettle of your chest… and soon it shall be stained by the fetid liquid you call your blood.”

“The battle is ended, Dracula, the only way it could have… with your death !”

Juno is a perfect henchman for any type of campaign where an incorruptible henchman is needed. He’ll follow orders from any employer to perfect detail and could thus be part in an adventure as a henchman of any grand villain, particularly those with a connection to China such as Kobra, Dr. Tzin-Tzin, The Mandarin or King Snake.

Equipment:
Prosthetic Left Hand [BODY 08, Bonus: The hand may be equipped with a variety of hand parts for various effect). Parts include : 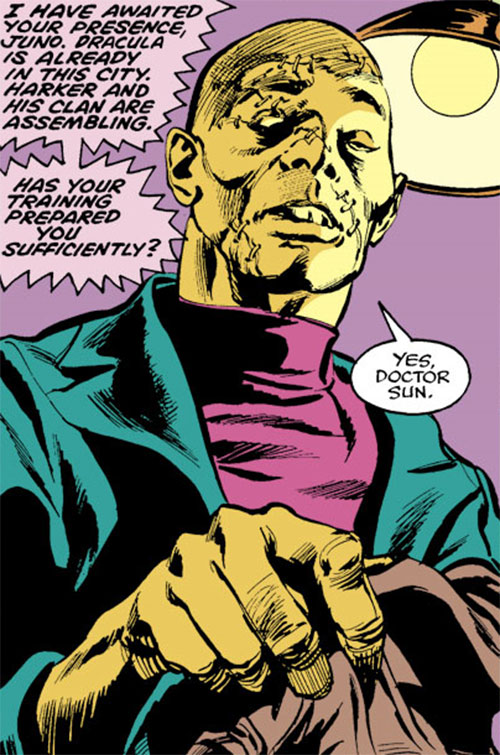