Danny exists within a gravity well, out of phase with the World around him. Left alone Danny would lose cohesion within 15 minutes, at which point he would implode into a singularity, taking everything within a 100 yard radius with him. He wears a Gravity Belt, which is designed to suppress this.

His condition also allows him to:

He also has a floating servo-tech, allegedly salvaged from a brown bag gig in Latveria. Danny programmed with his mother’s personality. It floats around near him, often out of sight, and seems able to operate on its own. It also:

His origin, and the source of his powers, remains unrevealed. But it is rumoured that his real name was Vincente, and that he was a high-ranking official in the LCL (the Volcan Domuyan Secret Service).

He claims to have also worked for the NSA, writing books for them.

Danny was first heard of working for XCON. XCON was a conspiracy between factions of the US Intelligence community, the Russian Mob, and the LCL.

He was part of the XCON operation backing a coup of Wakanda. They armed arm extremist factions in the neighbouring country of Ghudaza, enabling a civil war that turned into an ethnic slaughter. It was during this operation he first encountered Black Panther (T’Challa).

Following the failed coup, control of XCON was usurped by Hunter, the White Wolf. He is T’Challa’s adopted brother and head of the Wakandan secret police, the Hatut Zeraze. Hunter’s goal was retribution for their acts against Wakanda.

XCON had instituted a plan, which had been taken over by Hunter. Its objective was to replace heads of state, and other important figures, with doubles that were under their control. They had already taken control of Canada in this manner, and had just replaced the American President.

Following the fall of XCON, Danny was out of favour with the intelligence community. He thus found himself unemployed, forced to do any freelance jobs he could find.

One instance was being hired by a wife to find evidence of her husband’s infidelity. Danny took her husband’s car, which she had given him permission to do, so his forensics team could find the evidence. He then offered her husband a deal to provide her with fake evidence that wouldn’t stand up in court.

During this time he made contact with Moishe the Cleaner. He was another freelance spook, formerly of Mossad, looking to get back in the game. Moishe, apart from running his dry cleaning business, was an errand boy for the CIA. And he worked for the 66 Bridges.

The Bridges were a former New York street gang that had grown into a legal business, Grace & Tumbalt. It was now the largest gang on the East Coast, with a number of politicians, judges and police in their pocket, and connections to the CIA.

They set up a fake meeting between themselves. Moishe recruited Danny to help with a problem the gang had, with the goal of getting the CIA talking to him again.

Get on the money train

66 bridges had a weekly “money train”. It travelled on an old subway maintenance track, was run by their policemen, and delivered their payroll drop. The train had been derailed under the Little Mogadishu area of Brooklyn. Over $7M in cash and drugs was stranded there. The police and the local gang warlords were all trying to get to it first, before the media.

After a meeting with Triage, head of Grace & Tumbalt, Danny eventually agreed to the job. He went after the train. When he reached it, he clashed with White Tiger (Kevin “Kasper” Cole), whom he managed to overcome.

But Vincent was then knocked unconscious by Jim Rhodes (War Machine). Rhodes left them both tied up, with the police closing in on them, and Danny’s belt malfunctioning. Tiger managed to free Danny, who abandoned him without returning the favour.

Danny tracked down Rhodey, who by this time had rescued and recruited Kevin, to get him to fix the belt. Danny caught up with them at a Alcoholics Anonymous meeting in a local mission run by Josiah X. Josiah subdued Danny and Rhodey fixed his belt.

Rhodey then tried to recruit Danny to help him as well/ He offered to help him get back in the CIA’s good books. Danny worked out that Rhodey had planted chemical tracers on the money train cash, and agrees to work with him.

The three of them confronted Josiah X, whom they knew had been in contact with the train money. They discovered that he’s the son of the original subject of the Captain America super-soldier project, going by the identity of Justice, dressed in a costume similar to Captain America’s.

X tolerated the trafficking because interfering with it would endanger civilians. But when he realized that Rhodey was going to interfere with or without him, he chose to cooperate with the Crew.

They tracked down the recipients of the drug money. They warned them that they knew of their connections to the 66 Bridges, while also gathering evidence. They then stormed Grace and Tumbalt’s offices, intending to capture Triage.

The Crew cornered Triage in the street. But a Black Hawk helicopter had been sent by the CIA tries to kill Triage, to cover up their connection to the 66 Bridges. While Josiah X rushed to rescue the people endangered by the attack, Danny and Kevin attacked the ’copter. They managed to bring it down, and apprehend the pilot.

Danny then captures Triage, away from the others. Yet he decided to turn him in to the police, rather than use him to get back in with the CIA.

The nature of his powers leaves him slightly disconnected from the world around him. As a consequence, Junta tends not to for deep connections with people. 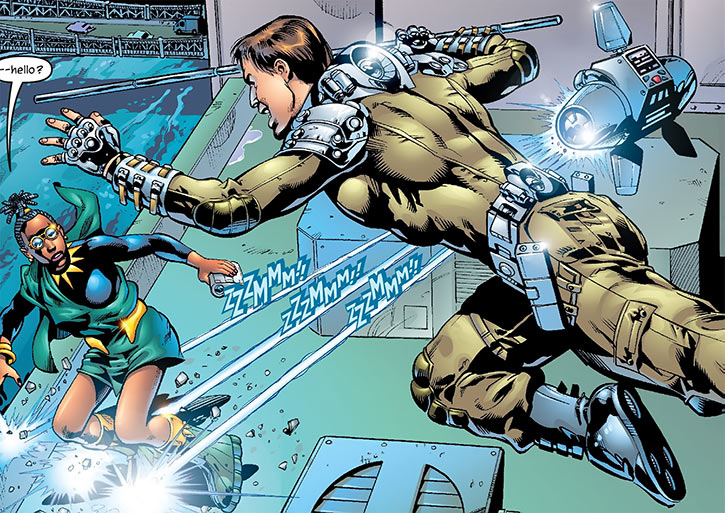 He displays a breezy, wise-cracking personality. Junta projects the impression that he does not care about the world around him, is only out for himself, and justifies the things he does as just business. For instance, if he hadn’t armed a faction to start an ethnic cleansing, the contract would just have been given to someone else.

While this is easy enough for him when he’s distant from the effects of his actions, it gets harder the closer they are.

“I’m Danny. I live in Queens with my mom. I write books for the NSA.”

“I don’t have any friends, Triage — not worth the investment.”

“Cops’ll be all over you in about a hairy eyeball, pal. Scooby says ‘rotsa ruck !’”

“Don’t you have super-strength or heat vision or some such ? I mean, you do more than pull spandex out of your crack, yes ?”

Jim Rhodes: —why did the chicken cross the road ?”
Junta: “Because the road crossed him.”

XCON was destroyed as part of the Janus Directive. Junta later took part in some Suicide Squad missions, to try and get back into favour.

Source of Character: Marvel Comics (Black Panther and The Crew). 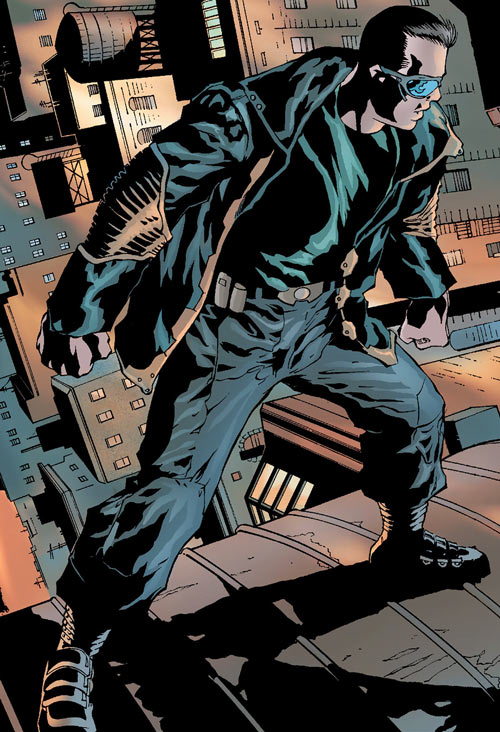 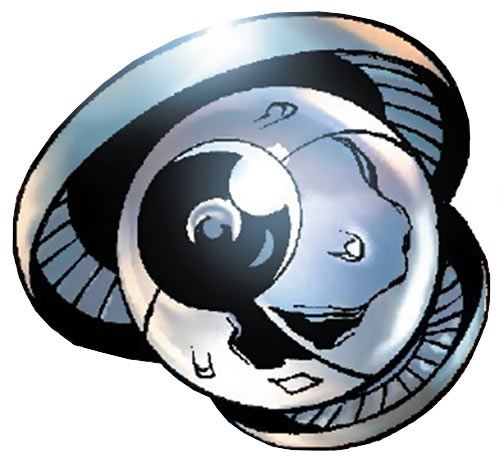