Jushin Liger is a gifted acrobat and one of the great working martial artists. He frequently uses his ability to electrify his body to make his already-devastating kicks and palm strikes all the more powerful.

Keiichi Yamada was trained from age 3 to be a champion gymnast. He excelled at the sport and was well on his way to a string of championships when his metahuman abilities surfaced. The Ministry for Internal Defense moved in and recruited him (at age 15) to train for a career in police work.

Yamada completed his initial combat training in Japan and his training on detective work and observation in Europe and the United State. Then he left for the final stage of training in a special international training facility in Canada known as “The Dungeon.”

While there, Yamada worked under the name “Flying Fuji Yamada” and trained with a young Edmonton native named Chris Benoit. Their paths would cross again.

In 1989, Yamada returned to Japan, where he would was to begin his career. But fate interrupted that.  He discovered memos linking his superior officer to the very crime syndicate Yamada was being assigned to eliminate.

Yamada disappeared. But he returned wearing a red and white costume and red mask as “Jushin Thunder Liger”. It was based upon a popular cartoon character of a few years prior.

Liger was better at the detective work than his superior would have liked. The masked renegade publicly exposed the connection and became a hero and celebrity.

He would continue fighting crime under the Liger name. He teamed up with Chris Benoit when Benoit arrived in Japan for the first time. Neither man made the connection, as both fought under masks (Benoit as “The Pegasus Kid”) and never revealed their identities to each other while partners.

When Benoit attempted to keep some of the stolen goods they recovered from a thief, Liger tried to stop him. Benoit knocked Liger unconscious and left.

Liger worked with two other masked heroes following Benoit’s betrayal. The first, Hayabusa, was privy to Liger’s identity and unmasked appearance. However, when Liger (in his secret identity) offered Hayabusa (also in his secret identity) a job and Hayabusa declined, Liger was insulted. He dissolved the partnership, and has not spoken with Hayabusa since the incident.

The final (and current) masked partner of Liger, has proven to be less of a partner and more of a sidekick. Feeling twice-betrayed, Liger has refused to work with anyone as an equal, and is clearly the driving force in the duo.

They tangled with Benoit and his new allies, “The Unholy Trinity”, Black Tiger (Eddy Guerrero), and Dean Malenko.

During their last confrontation, Liger publicly unmasked “The Pegasus Kid”. But Malenko and Black Tiger were able to create enough of a distraction to enable Benoit to escape. While standing at the scene of the battle with El Samurai and responding police officers, Liger collapsed.

El Samurai checked his partner into the hospital under an assumed name. Liger had been diagnosed with a brain tumor. Surgery was successful, and after several months of intensive therapy, Liger felt ready to resume his costumed career. This is when he found out that he had lost his power of flight, as well as some of his natural mobility.

With Benoit and his partners no longer in Japan, Liger took the opportunity to adjust his style to accommodate for his lack of flight and lessened acrobatic skill. Once this was done, he returned to fighting crime, this time a little slower, but more driven than before.

Liger is short and extremely muscular. He has long black hair, which comes out from the back of his ornate mask.

He varies the colors of his costume, favoring a red and white design, with a red mask and a black bat-winged dragon design on the chest.

He is also something of a showman – he prefers it when his super powered battles are in front of a crowd of onlookers and gets a kick out of the attention.

He goes to great lengths for his friends, but any slight, real or perceived, is not easily forgiven. This includes those who do not except his favors graciously.

*shakes his finger disapprovingly at his enemy*

Liger would fit well as an associate of Katana. His mask is so distinctive that it (or an exact duplicate of it) might be among the many featured in the collection of Dumas from the Manhunter (Mark Shaw) series.

Liger suffered a brain tumor several years ago. While this has slowed him down a step or two, he has modified his fighting style to accommodate his decreased physical abilities. Before the surgery to remove the tumor, his stats were as follows (everything else was unchanged).

During this period (1989-1996), Liger used his flight to great advantage in hand-to-hand combat. His signature combat tactic was “the Shooting Star Press”, which involved combining his acrobatic gifts with both his flight and his electrical field. He would fly forward while rotating his body backwards, striking his opponent with his electrical field activated (consider it a Devastating Blow). 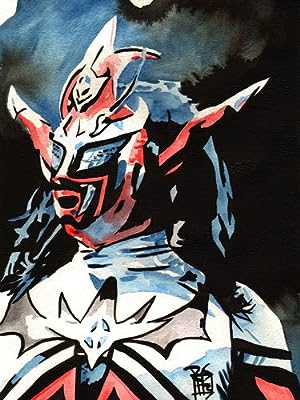 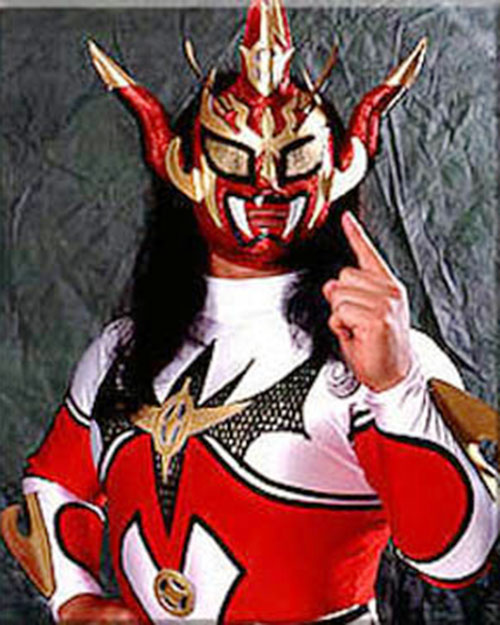 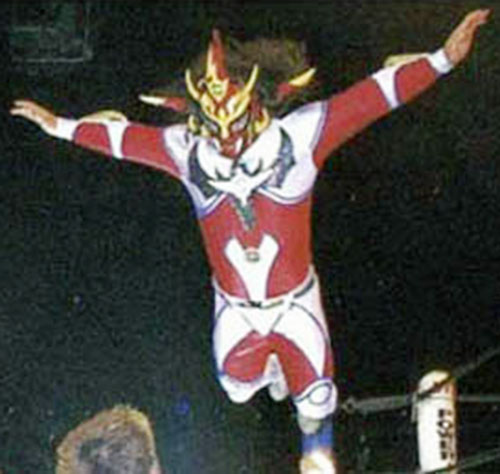