Our 1940s JSA material is presented as a series of mid-sized articles, to be read in order.

Since we doubt most people’d prefer to read everything in one go.

Some captions still mention that the organisation is officially called the “Justice Battalion”. That presumably stops being true in 1946.

Purpose:
Ever since 1942, fighting the Axis powers is a primary drive. But fighting extraordinary criminal activities is a close second.

Once the war ends, the Society is back to being an enemy of crime and foul play.

Extent of operations:
Primarily the USA, but the Society can still intervene in other countries, planets and dimensionsOther realms of existence that are not our universe..

WW2-related operations remain focused on a largely fictional “domestic front”, though. There’s no indication as to why the Society doesn’t just send the Spectre, Dr. Fate and Wonder Woman to Berlin, Tōkyō, Rome, etc. for decapitation strikes.

Or to support Allied troops on the harshest battlefields, such as Stalingrad.

Except for a spurt after Pearl Harbour, World War Two rarely intersects with Society activities. Most of the time, it might as well not exist. For instance, one 1944 story features an athletic man of prime drafting age desperately looking for a job.

Bases of Operations:
In 1946, tenuous implications that the Society is headquartered in New York City begin to appear. Though sometimes it feels like they’re in Gotham City.

One caption points out that their meeting room is devoid of “luxurious trappings” or “boastful trophies”.

Major Funding:
Several stories emphasise how the JSA doesn’t accept any gifts or funding. Which is easier, when, unlike writeups.org, you have multiple affluent or millionaire members.

Known allies:
During this era, the Society isn’t seen taking requests from the police or the military. However, the President once calls for their assistance.

Professor Everson, polymath inventor of the time ray, twice worked with the Society. 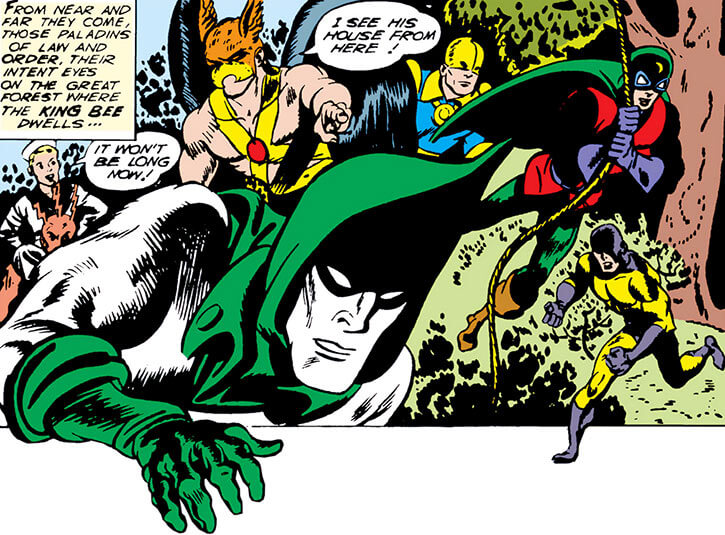 Organizational structure:
The Society continues to run largely as a social club. The chairman drives the discussions, but decisions are collegial.

Law enforcement and military authorities can make requests, but there isn’t a chain of command per se. And these requests dwindle to nearly nothing after the war ends.

The full “Justice Battalion”, with the Society working for the military, only lasted for like four months in 1942. By this era — 1943+ — it has long since faded out.

As the years pass, the light formalism around the role of the chairman fades away. By 1946 or so, one could easily assume that the position no longer exists.

Junior Justice Society:
Thousands of American children are members of the JJS. They are issued badges, membership certificates and a cryptography wheel. The JJS kids support Society members operating in their area, as junior guides.

(Kids clubs with cryptography (such as decoder rings) and other espionage trappings were common during the mid-XXth century. That was a popular marketing technique for products aimed at kids).

During the Summer of 1947, Wonder Woman (Diana Prince) equips the Society with miniature Amazon “mental radios”, for long-range real-time communication among deployed members.

Since previous stories often relied on the JSA members converging onto the same spot at *just* the same time by amazing coincidence, you could retconMaking changes to a character or story after the fact. the “metal radios” as having been issued earlier.

It also makes good sense that Diana would do that earlier.

Some 1943 big band White popular music, lessee… Uh, I guess that picking “I had the craziest dream” could be used as a homage to Gardner Fox’s creativity.

In early 1943, the Society conducted a new round of actions against pro-Axis fifth columnists and saboteurs.

JSAers received help and intelligence from the kids of the Junior Justice Society to arrest these malcontents.

(The double standards in this propaganda issue are… notable. Such hypocrisies further energised 1940s Civil Rights movements. Such as the “Double V” campaign whose emblem was on the shield of Captain America (Isaiah Bradley) during the war).

The Brain Wave returns. See his profile for more.

The King Bee (Elmer Pane) clashes with the Justice Society.

Hawkman has disappeared. But he left behind cryptic, hidden messages for each Society member.

Following his hints, each JSAer foils a dastardly crime against a notable musical artist.

They eventually find Hawkman, who’s been captured by the culprit. Hector Bauer, a failed composer out for revenge against his far more successful childhood friends !

The Justice Society clashes with the Monster (Jason Rogers).

Though the Monster isn’t a major character, he’s among the first true super-villains that the Society fights. And could easily be made into a major 1940s menace if needed. 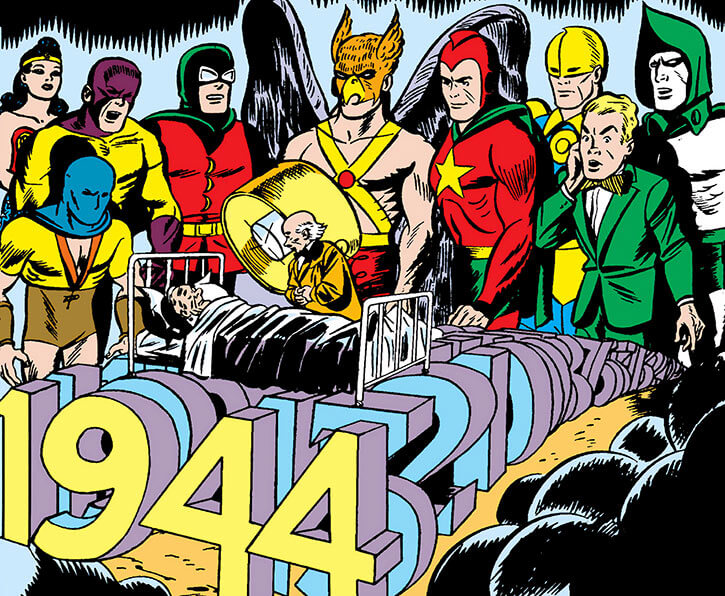 (Since this profiles series has notes about the delays between actual events and cover dates, I’ve been shifting the events chronicled in each issue two months in the past).

Joe Fitch, once a murderous criminal, fatally poisons himself to advance medical research. This will save thousands.

The only thing he now wishes as he dies is that he had lived a less harmful life.

As it happens, his employer is the researcher Professor Everson, who also invented a time ray. The one in ASC #10.

Each Society member is sent into the past. Each to prevent one of the crimes Joe Fitch most regrets committing. Each succeeds, and Joe Fitch dies as a hero and a retroactively more honest man.

The Conscience of Man.

As Society members are reflecting on intolerance and prejudice, a sort of otherdimensionalLocated in another reality. fairy appears.

She challenges the Society. A wizard will throw each member back into the past without their memory. And they will prove that even under such circumstances, they do not act upon the fears and hatreds of that place and time.

Obvs, they prevail. The airy fairy leaves, satisfied, after mentioning that she’s the Conscience of Man.

The Society then organises rallies where they give speeches to kids about tolerance and unity. All the children in the audience are White.

The Daily Courier newspaper challenges the Society to stop the terrible crimes of the Psycho-Pirate (Charles Halstead).

During this story the Conscience of Man fairy returns, sending individual Society members on tours through German history.

Wildcat and Mr. Terrific are called in to conduct two such forays.

Honorary members Flash and Green Lantern attended the previous meeting. It spurred them to return to active service, resulting in a different roster for 1945.

An amnesiac man recovers parts of his memory. He now knows that he must prove that a man condemned for a murder 20 years ago was innocent.

He requests the help of the Justice Society.

Per formula, each Society member investigates a different clue. They then solve this convoluted whodunnit.

The Metallic Jovian Horde has its own writeup, since they’re a good example of 1940s comic book alien invaders.

A public service teaching issue, this one about the evils of ableism  .

This may sound surprisingly modern, but the US was just emerging from a mass disabling event it couldn’t ignore – World War Two. And the wounded were returning home.

Fred Monday, a soldier who lost an arm and is now a disability activist, requests the Society’s help. He’d like them to help overcome prejudice faced by disabled kids.

The Society decides to pick six youths and have them help with their crime-fighting efforts to prove their worth.

Of course, each of the six boys demonstrates extraordinary talents developed to live with their handicaps. And there’s a didactic page about great disabled persons of history.

So, counter-productive by modern standards but heh, 1945 mainstream comic book.

The JSA intervenes to prevent murders by living paint.

The living paint has its own small “character” profile, since it could be cool to brush it up and bring it back. As a concept, it has layers and it’s not too dry. 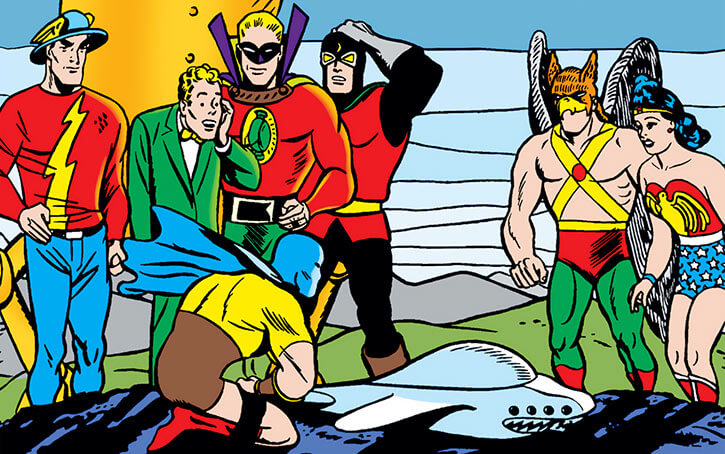 You may have noticed that the Society’s opponents are starting to all have their own character profiles.

Beyond keeping this article short, it’s also a sign that most of their foes are now close enough to the modern definition of a super-villain to have standard or nearly standard WORG profiles.

First appearance of Koelaha, the Stream of Ruthlessness. Normally this is a dry riverbed somewhere in the American West. But once per hundred years it is flooded with supposedly cursed water.

According to legend those drowned by this flood become undead, though they still look alive. And their better nature is entirely washed away, leaving them as immoral predators.

What actually happens is that they are dosed with an uninhibiting, addictive drug. And haven’t actually drowned, due to the water’s extremely high oxygen content.

Calvin Stymes exposes five childhood friends who wronged him to the Stream of Ruthlessness. Each a master of their craft, they use these skills to become expert criminals.

But the JSA stops and cures them, Stymes is seemingly killed, and Superman blocks the riverbed with a huge rock.

The Injustice Society of the World debuts. They briefly conquer most of the United States of America.

A crazed guard at a wax figures museum is outraged. JSA members made fun of the great historical villains who are the centrepiece of the new expo !

Disguising himself as those (Attila the Hun, Captain Kidd, Cesare Borgia, Genghis Khan, the Biblical Goliath, Emperor Nero), he defeats the individual JSA members. In fact, he kills most of the team.

However, Wonder Woman and Paula von Gunther narrowly manage to bring them back using the Purple Healing Ray of the Amazons.

Though the JSA is outmatched by the nameless crazy guard dude, Johnny Thunder ally Black Canary (Dinah Drake) rallies them. This too fails, but the crafty Canary outmanoeuvres the guard and saves the JSA – again.

Though Dinah is distraught about the guard’s accidental death, the Society makes her a guest member.

A Gotham City lass is condemned to death… for witchery.

She tells the JSA that she had a strange dream where a leprechaun gave her “the voice of the Lorelei”. Which means magical powers that she cannot control.

The Society invades the dimension of Fairyland. It is populated by a mish-mash of characters from fairy tales, but these are under the thumb of the evil Lorelei and her enforcers.

These thugs include Rumpelstiltskin, Gallifron, the tinderbox dogs and a squadron of witches.

Furthermore, dreaded Gotham City criminal Slicer allies with the Lorelei. He even convinces her to raid Gotham.

Under the de facto leadership of Wonder Woman, the Society figures everything out. Peace is restored in Fairyland, the Gotham “witch” is proved innocent, Lorelei’s invasion is repelled, how Fairylands intersects with Earth every 1,000 years is discovered, etc..

(In hindsight, this odd adventure could easily have been an encounter with the Queen of Fables).

By this point, the JSA had tackled multiple crises affecting the entire country. Such as the Solomon Grundy panic, or the conquest of the USA by the Injustice Society of the World.

At no point is there a sense that other heroes — starting with Superman (Clark Kent) — would intervene. The big National Comics (“DC Comics” for most) heroes are honorary members of the JSA since day one, and they guest star once in 1947, but we never otherwise see them.

So it *is* a shared universe. For starters, a lot of stuff happens in Gotham. But that sharedness is still a work in progress.

(The notion of multi-titles crossover already existed. Earliest example I’m aware of, via a CBR column  , is a 1940 cross-over between two MLJ super-hero comics.)