Hammer is a genius in finance and administration, and has amassed vast wealth and resources. He’s very used to be in power, and quite ruthless.

His paid agents include or have included :

Most of those would again work for him. Furthermore, many minor supervillains with a technological gadget or who need technology could be revealed as having been supported by Hammer with little trouble. He has also used Spymaster I and the Taskmaster’s services.

Hammer is thus the perfect excuse to bring out the nobodies with fancy weapons – ain’t that grand ?

Hammer is a reclusive billionaire living at sea in a huge floating villa, complete with vast garden. He is the head of an industrial empire with more than its share of shady activities. This corporate empire, however, is nearly unchartable even for the authorities. It is difficult to determine what Hammer owns and what he’s responsible for.

He owns strong interests in the weapons industry. Justin Hammer reaped a large part of what Stark International left behind when it ended its involvement in the weapons business.

Putting the Hammer to the iron

As it was probably inevitable, Hammer and Stark clashed. It was a bid over an industrial plant in Eastern Europe that triggered the conflict. Hammer attacked first, and decided on a strategy revolving around the demise of Iron Man to have Stark lose its credibility. Back then, he didn’t know Iron Man was Stark himself.

He perfected a means to remotely control Iron Man’s power armor and nearly destroyed him. Hammer once remotely triggered the palm repulsor of Iron Man, making him murder an ambassador in front of international TV. 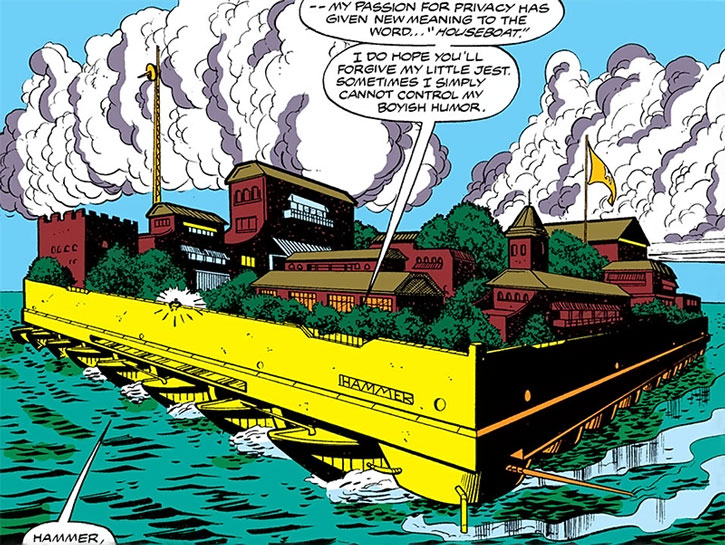 Hammer’s also the one who bought the secrets of the S-Circuit – the cybernetic link allowing instinctive control of a suit of power armor, designed by Stark – from Spymaster I. He used the design to greatly improve the design of numerous villains’ gadgets.

Stark ultimately managed to demonstrate he wasn’t to blame for the murder. He then routed Hammer and his army of small-time supervillains. Howbeit, nothing could be positively blamed on Hammer.

Star also embarked on a crusade to destroy the S-circuit in numerous power armours  used by villains. But this backfired on him and he had to “fire” Iron Man to cover for excesses committed during those “armour wars”.

Hammer has since appeared sporadically, mostly as an employer for Spider-villains or to mastermind the occasional attack against Stark.

After Obidiah Stane’s suicide Justin Hammer obtained all of his interests including Stane International (formerly Stark International). He then had the company engage in numerous unsavoury deals. These often included the illegal sale of weapons based on Tony Stark’s patents.

A dying Tony Stark used threats of violence to force Hammer to sell him SI for nut one dollar. But the resourceful master businessman turned this to his advantage by revealing the questionable dealings that the company had been and was still engaged in.

When Hammer was told by his doctors that he was dying he tampered with Tony Stark’s “hormonal balance” to make him as ruthless as Hammer himself. Although Stark supposedly overcame this meddling when he confronted Hammer on board his space station and had no problem with leaving Hammer orbiting the Earth frozen solid in a block of ice.

Hammer is a cross between an evil CEO and a James Bond villain in the early 1980s. Play him as a cinematic mastermind and you should be set. His fortune is somewhere between Stark’s and Luthor’s, and he’s extremely intelligent. Hammer eventually discovered that Stark was Iron Man, and did great damage to the “invincible” Iron Man).

It is unclear why Hammer does not acquire more powerful help, and relies on minor thugs. However, in order to stay true to the character, you rather should use armies of smalltime supervillains (preferably based on one gadget or weapon) rather than a small cadre of powerful foes. It’s probably in order to better control them.

“Just my way of welcoming you back to the world of commerce, old boy.”

(Chuckle) “This is going exactly as I planned.”

He would make a good rival for Lex with your heroes getting caught in the crossfire. Or you could replace the current Luthor with Hammer and bring back the silver-age mad scientist Lex.

Working with Hammer Industries costs a 50% cut. This is generally handled as the Debt 1 Drawback.

The benefits one gets in return have never been quite seen on-panel. Our rough estimates are :

Aside from his superpowered or super-equipped flunkies, Hammer hires numerous helpers – mostly engineers or mercenaries.

The engineers have about Gadgetry: 05, Scientist: 05. Some exceptional specimens might have Gadgetry: 07 and/or Scientist: 07, but they mostly rely on teamwork. None of them has Genius, and much of their work has revolved around Stark’s early versions of the S-circuit.

The mercenaries have the following stats : 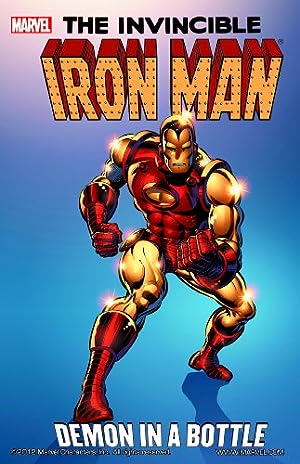 Iron Man: Demon in a Bottle