“Introducing : the mystery of The SEEKER !”
-A clamorous carmine cover caption in FF #46.

This obscure Marvel Comics baddie first appeared in 1966. He wasn’t too detailed (the caption *did* say he was a mystery !), but he’s a useful archetype.

I suspect that much of his exposure was in one of ’em 1990s Marvel cartoons, though.

This article is best read after our articles about Inhumans history. But it’s not indispensable. You can do without, if you have a basic knowledge of Inhumanity.

As an Inhuman, Kadlec benefits from generations of breeding for strength and endurance. These are likely in the peak human range.

His reflexes, physical acumen, speed, etc. are also well above the Human median. 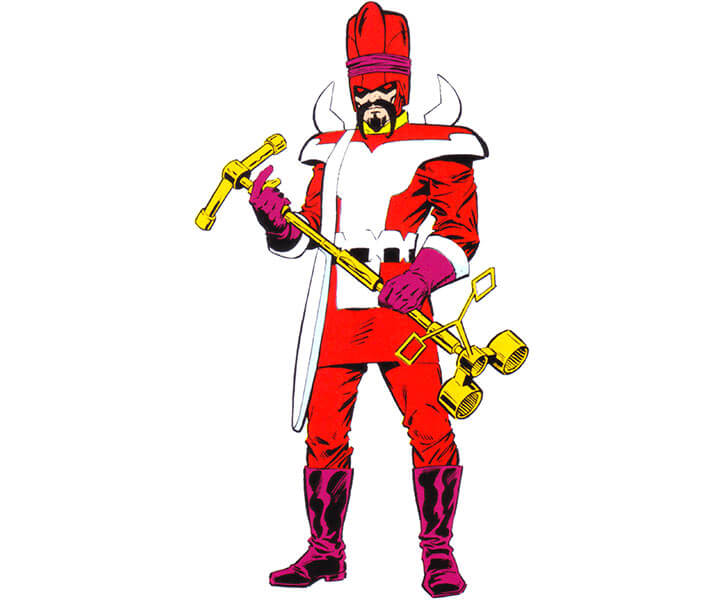 His Terrigenesis power is a psionicPsionics are sci-fi style psychic powers ability to track down other Inhumans for “thousands of miles”.

However, he seems to need a “scent” to track, rather than instantaneously locate his prey. For instance, he could track down the Royal Family, yet they could remain one step ahead of him.

Interestingly, the Seeker couldn’t tell whether Dragon Man was an Inhuman without lab tests. So he likely can track some marker of super-powered-ness, which back then was normally encountered in Inhumans.

Having served as the Viceroy of Attilan, Kadlec is familiar with the inner workings of Inhuman institutions and royalty.

One statement implies that Kadlec is extremely long-lived. But this might have been referring to the position of Seeker – rather than Kadlec specifically.

The Seeker has access to treatments to withstand the pollution of the outside world. If he’s long-lived, it seems possible that he built up immunity against both the pollution and the treatments’ side effects. 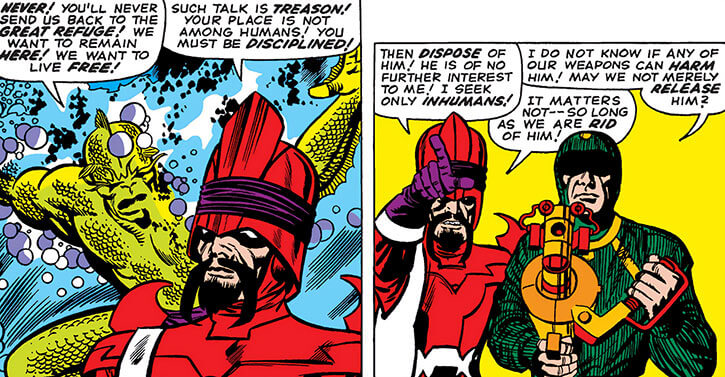 All you need is a moustache and a gun

The Seeker uses an advanced arsenal of Kirbyesque weapons :

His most distinctive weapon is a slim metallic staff called the Universal Control Rod. The name suggests a tech similar to the Kree Universal Weapon used by the Accusers. Demonstrated capabilities :

Implicitly, during the 1960s the Seeker had special weapons that could counter or overcome all of the Royal Family’s abilities, including Black Bolt’s.

These were so efficient that the Family had no choice but flee from him. They considered that only a fully-charged Black Bolt could even delay the Seeker.

One suspects that many of these tailor-made weapons had been built or modified by Maximus. But perhaps it was specific programming of the Universal Control Rod.

The Seeker has occasionally operated with a trio of trained guards. These mooks carried extra gear :

There also was a pilot, flying a strange-looking cargo aircraft with a powerful winch.

Three more men operated a mobile base. We don’t see much of it, but :

The Seeker of Attilan has, “for ages”, sought “signs of our long-vanished kin throughout the Human world”. What this means is unclear.

However, during the 2010s we learned of multiple Inhuman communities, some mixed with Humans, who left the Great Refuge. Only a handful — chiefly Uttolan and Orollan — survive.

The Seeker’s role *might* thus have been to look for descendants of such communities. Especially those retaining enough Inhuman genes.

Before the 2010s, the assumption about the Seeker’s role was that there were Inhumans fleeing from the Great Refuge. And that the Seeker would kidnap them back.

That this happened often enough to have an expert on hand seems a bit odd.

But then, there’s no reason why the Inhumans wouldn’t retain a largely symbolic posting. As with the honour guards above the Terrigenesis caves. They have no shareholders to appease through budget cuts.

(It is faintly possible that the Seeker’s position was inspired by the Huntsman of Olympus’.)

The reign that never existed

Nevertheless, by the 1960s the position of Seeker had evolved. Though he was still often addressed as “Seeker”, Lord Kadlec worked as the Viceroy.

This new position likely was created by King Unspoken.

Though it sounded like an admin position, the Viceroy actually was an intelligence agent. He :

Viceroy Kadlec came to lust after Medusalith Amaquelin – who back then was maybe 17. Perhaps because many in Attilan saw her as a future Queen.

Kadlec spied on her, both out of creepiness and to get blackmail material about her.

Hail to the King, baby

Alpha Primitive insurgents nearly killed the King and the Boltagon brothers. Kadlec had the royal guard retaliate against Alphas who had not participated, to affirm authority.

King Unspoken also met with Medusa, to get a sense of the likely future Queen. After this brief conversation, Kadlec pawed her, tried to blackmail her into complacence, and got punched quite hard.

Ms. Amaquelin fled to New York City with the Boltagon brothers. Kadlec alerted the King, so he would be sent after her. The ambitious Viceroy sought to eliminate the Boltagons and capture Amaquelin, to perhaps get the throne.

However, King Unspoken knew, or strongly suspected, that his Seeker was up to no good.

The Seeker quickly tracked down the Boltagons and Amaquelin in New York City. However :

Kadlec was captured, but soon vanished. Perhaps he escaped.

Years later, Black Bolt succeeded King Unspoken. But his brother Maximus soon took over thanks to his Trikon plot.

Black Bolt and the Royal Family were cast into exile. Numerous hostages would be executed by Maximus’ men if they resisted.

Kadlec the Seeker almost immediately came to work for King Maximus. Perhaps he had been imprisoned, and Maximus freed him.

By this point, Kadlec behaved in a more remote and mechanical manner. Maybe Maximus telepathically brainwashed him unto loyalty, altering his behaviour. 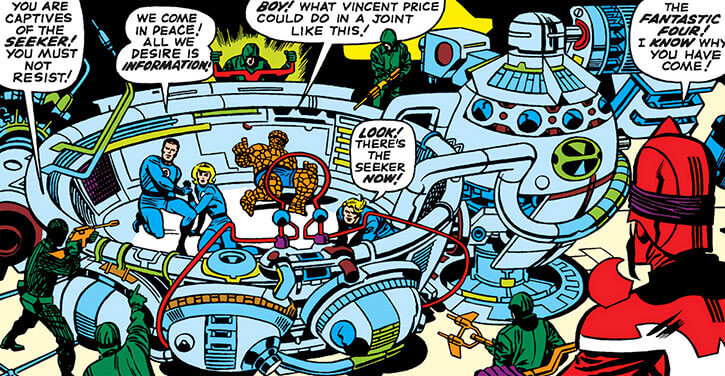 Maximus soon had the Seeker murder his co-conspirators among the Alpha Primitives. Now that the madman was on the throne and oppressing the Alphas, his erstwhile revolutionary allies had to go.

In 1965, Maximus saw Human news of Medusa having joined the Wizard’s Frightful Four. As a response, the Seeker was assigned a detail of guards, and sent to hound the exiles.

He hunts the most dangerous game… Inhumans !

This stalking lasted for months. The Seeker’s efforts forced the Royals into deep clandestinity approaching paranoia.

This also made it less likely that they’d seek allies.

(Fantastic Four Vol. 1 #46 states that the stalking lasted for “years”. But Fantastic Four: Fireworks is where we see that the Seeker was dispatched after Medusa joined the Frightful Four. Which means it was months and not years.)

During these months, Gorgon once returned to Attilan to negotiate with Maximus. This didn’t work out, but Gorgon still demanded to see his imprisoned parents. His mother told him of Korath’s death.

When Gorgon turned against the nearby Kadlec, the Seeker shot him unconscious with a stun beam.

In 1966, the Royal Family accidentally clashed with the Fantastic Four. During the commotion, the Seeker and his guards swooped in and snatched Triton.

They then invaded the FF’s Baxter Building headquarters to free the Dragon Man, whom they wrongly thought was an Inhuman.

Triton’s holding tank was accidentally smashed by Dragon Man. Triton was saved by Reed Richards and Susan Storm, but the Seeker then deported the Inhuman back to Attilan.

However, the rest of the Royal Family soon invaded Attilan and deposed Maximus.

Maximus triggered his Atmo-Gun in retaliation. Though the Seeker was against firing the Atmo-Gun, and Maximus no longer was King, Kadlec dared not oppose the dread power of the usurper.

Black Bolt and Gorgon then came after Maximus and the Seeker. They nearly were slain, but Gorgon’s quick thinking incapacitated Maximus.

Kadlec was killed when Gorgon kicked a wall, collapsing a ceiling upon the Seeker to avenge his father.

Kadlec would be succeeded as Seeker by his twin brother Uys.

Kadlec’s outfit resembled the Wizard (Bentley Wittman)’s. This was even more obvious with the variant worn by Uys.

A verbose, arrogant bully who likes feeling superior and in charge.

He likes to present himself as a cold and haughty executioner. But he’s much less confident when facing something he’s not armed to deal with.

Kadlec seems to have an inflated view of himself. Perhaps because he occupied a dreaded, unique position for so long. He thus felt entitled to power, to the finest women (whatever that means), to being feared, etc..

Yet he did not seem particularly equipped to handle what he felt he deserved. 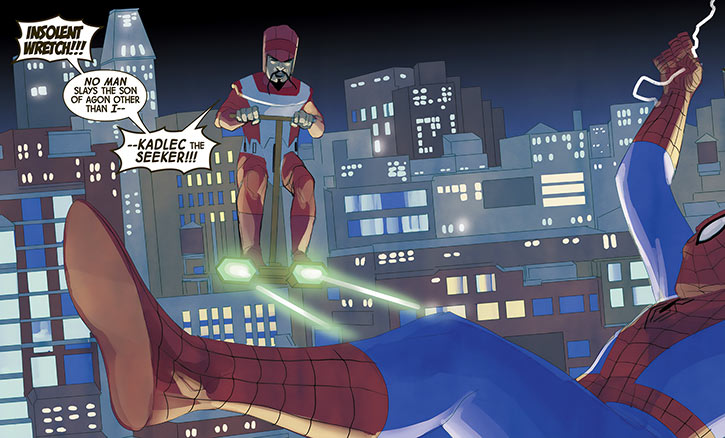 “Silence ! No one advises the Seeker ! The Seeker fears nothing ! We shall proceed ! My life is dedicated to tracking down the Inhumans ! Nothing can stop me ! Nothing can swerve me from my purpose !”

“You who dwell here are all the same ! You think you are the only race inhabiting this planet ! You never suspect that another, more powerful species might share your planet with you !”

He resembles other Kirby creations such as Devilance the Pursuer. And since the Fourth World is Kirby’s main DC mythos, the Seeker IMO becomes redundant.

Credentials (Attilan security, Medium), Headquarters (Expansive), Language (Kree), Near-Immortal, Rank (Sergeant – he can have a squad under his orders).

The squaddies who accompanied the Seeker in 1966 were mostly there as extra sets of hands, and to carry extra gear. They’re, well, extras.

Use shock trooper stats, but they presumably have STR 05 BODY 04.

There’s frustratingly little usable material about the Seeker’s abilities and his gear. A *lot* of the numbers are thus speculative.

As noted, that it’s a vibroknife is hypothetical. We never see him use it.

I am assuming that the ARMOUR has security measures against gas and the like. Hence the chunky /BODY/. Plus, it presumably works against cold/friction from supersonic flight on a pogo stick.

I have no idea what shifting Black Bolt “out of phase” did. Or how Bolt got out of that state (the Rod’s control being covered in Spidey’s webbing, maybe). It’s therefore not modelled.

The relatively high Hero Points are to model that, *apparently*, he’s the Ayatollah of Rock’n’rolla when on top of the situation. But these’ll run out, at which point he ain’t all that.

High-ish INF/AUR since he looks impressive in a Kirby/Lee way, and Socially Inept to adjust that down to observed social performance.