Kaga is a crippled old man, stuck in a wheelchair and deformed by painful mutations. He’s also completely crazy as a result of his pain, bitterness and isolation. His obsessions simply do not make sense if given a small amount of scrutiny.

He is, however, a brilliant technologist and inventor. He seems to specialise in biological engineering, and can run huge projects. However, he lacks the spark of genius of a Henry McCoy. as a result, he needed to steal his research to make his real breakthroughs.

Likewise, his research occurs on a more realistic time scale. Its pace is impressive by real-world standards, but not comic book-ish.

Kaga has gigantic resources. Howbeit, like with his technological acumen, there’s an important caveat. A lot of his labs, fortresses, vehicles, prototypes, etc. seem to be the result of decades of careful management and slow accrual. These are not things that he can get by snapping his fingers. 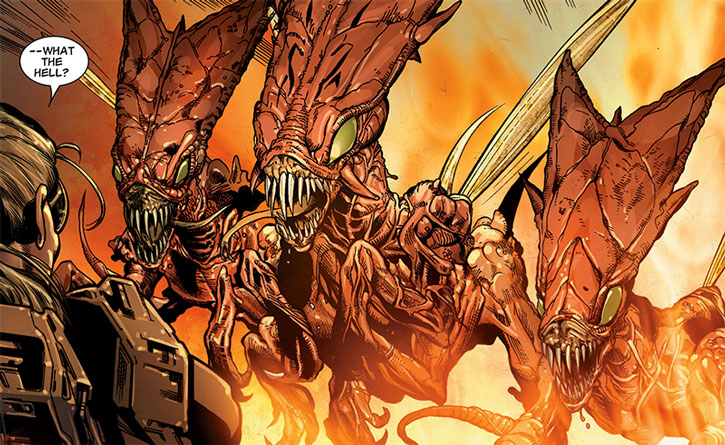 He is immensely rich. But his general strategy seems to have been to build up his research and production base until it became monstrous.

Kaga can pay the very best specialists to perform specific assignments, such as hacking Dr. McCoy’s files. Though in comic books hired help isn’t normally heroically skilled, Kaga can have things done that are loosely comparable to the work of an heroic engineer or computer expert. Not a leading one like Tony Stark, but he may get people who can perform in the tier below that.

Presumably, that requires an awful lot of money.

Once Kaga stole Dr. McCoy’s research about extracting the x-factor from mutant corpses, he could repurpose his production base. It thus became capable of cranking out a small army of biological constructs using genetic material from deceased foes of the X-Men. Kaga was essentially throwing their history back at them in the form of giant zombies.

The creations that were witnessed:

Various other kaiju-sized projects were glimpsed, many with Brood traits. Visual references to features, costumes, etc. included the Man-Thing, the Juggernaut, Magneto and N’astirh. Most of these projects seemed unfinished.

Kaga also owes assets built with less organic technology, albeit on a sci-fi scale. Such as asteroid bases, giant labs hidden within hollowed-out mountains and cloaked aircrafts the size of a small city (technically, a ionospheric cruiser/carrier).

These are easily the equivalent of the best Hydra stuff, and thus sophisticated, stealthy and powerful enough not to get immediately stomped by S.H.I.E.L.D. or S.W.O.R.D..

Kaga is the child of an Hiroshima (video) survivor, and was thus born in 1945 or 1946. His DNA was damaged by the radiation. He was thus born an early mutant, the x-factor presumably allowing to survive what should have been fatal changes. His body was crippled and monstrously deformed, and Kaga was presumably in constant pain.

As he grew up, mutant births were observed in greater numbers than ever. By the early 1960s research into mutants was still fringe, but the “children of the atom” notion had gained some currency.

According to this framework, the birth of mutant babies from the 1950s onward was caused by an increase of the background radiation on Earth following the various nuclear detonation of the 1940s and 1950s, and the rise of nuclear power generation.

In this theoretical framework Kaga was one of the very first “children of the atom”, along with Nekra and Mandrill.

Kaga lived a solitary life. Even his parents found it difficult to look at his wrecked and deformed body. But he turned out to be a technological genius. Kaga had a special interest in biology and medicine as he needed to develop means to keep his ravaged body alive. By age 16 he patented a number of his discoveries, which was the start of his colossal fortune. 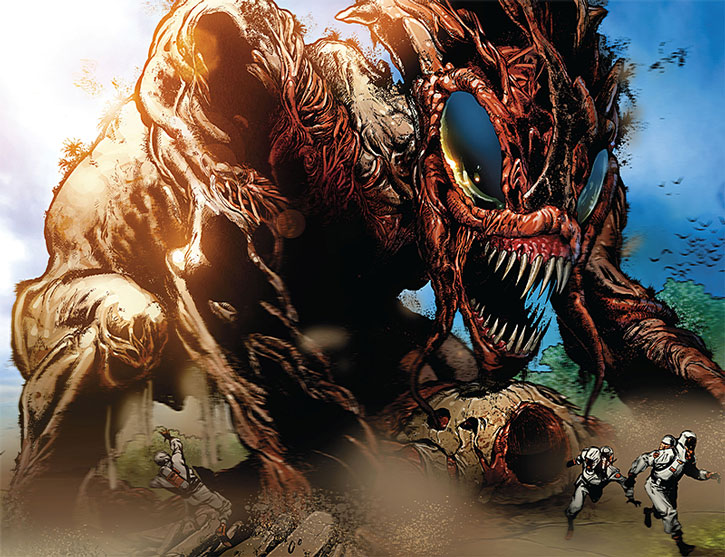 When he heard about Professor Xavier and his generation of mutant youths in the US, Kaga thought than he had at least found peers. However, what he observed were not fellow disfigured outcasts ravaged by radiation. They were gorgeous, athletic youths possessing extraordinary powers, clad in tight costumes, forming a vibrant community and benefiting from guidance from their elders.

Kaga’s sanity took a sharp dive. He became haunted by irrational jealousy of the X-Men. He started obsessively building up means to kill them. Yet he wasn’t actually doing much, as he wallowed in bitterness and solitude.

Furthermore the mutant population, and the number of folks associated with the X-Men, continued to rise. Thus Kaga stayed his hand as he knew that he probably couldn’t wipe them out.

This continued for decades. One suspects that Kaga was afraid of succeeding since that would rob him of what was now his reason for living. 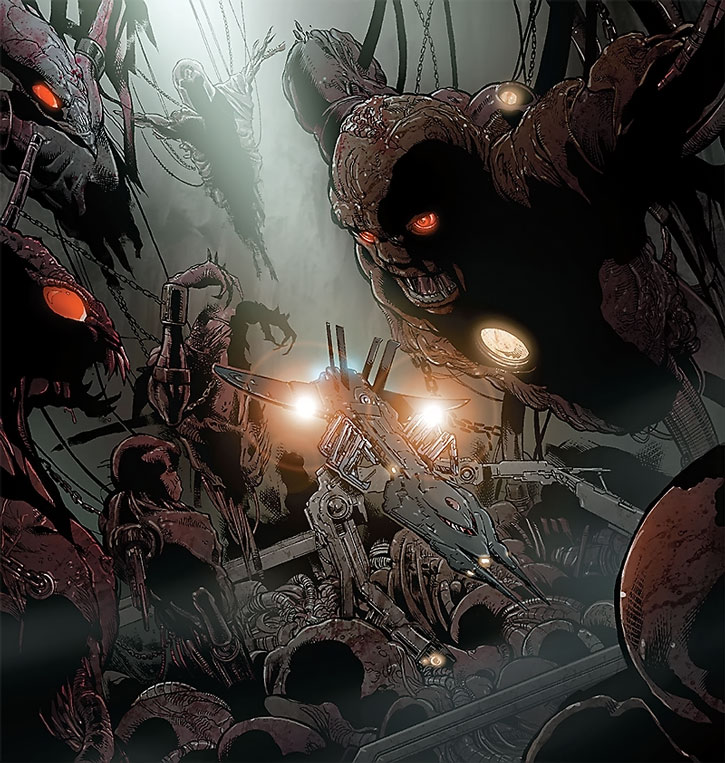 Still, he built up considerable powers. One successful area of research was to create clones of the alien Brood, then enlarge them and make them even deadlier. Among the more spectacular projects of Kaga’s was the creation of a secret base within Cruithine . This is a chunk of rock in loose orbit behind the Earth, making it impossible to constantly monitor.

From context, one gets the impression that the zero-G labs there are what allowed the most progress with the Brood-based meat puppets. This acceleration likely took place during the early 2000s.

In 2005, the Decimation  occurred. The Scarlet Witch cast a spell that greatly reduced the number of mutants worldwide, though Kaga wasn’t affected. There were apparently but a few hundred mutants left worldwide. While many of the X-Men weren’t affected their overall force was significantly reduced.

It was now or never. However, the X-Men still formed a formidable fighting cadre. Thus, conventional force was unlikely to succeed. Kaga needed a new edge whilst the X-Men were still reeling.

Kaga decided to steal research from mutant genius Dr. Henry McCoy aka the Beast. This was a very expensive and well-planned operation. Nothing less could cope with the extraordinary level of security surrounding McCoy’s research.

The key was the severed head of a human/Phalanx hybrid calling himself Paradigm, who used to run with King Bedlam’s New Hellions. The best hackers money could buy learned to use the corpse’s OS to defeat the Beast’s security.

Automated measures made it impossible to get more that one file even using Phalanx tech. But Kaga was gifted enough than one file of McCoy’s opened vast possibilities to him.

The file was about McCoy’s research after the Decimation. The researcher had for a time investigated the use of mutant corpses to research the impacts of the spell and work around these to restore mutations or the potential thereof.

Kaga turned this research into the means of creating animated, super-powered clones of mutant corpses. The Brood-centric research was extensively reused with these. But it was now possible to build meat puppets that were far more powerful than the pseudo-Brood.

Some months later a S.W.OR.D. tactical team was sent to raid Cruithine. But the lab self-destructed and threw a guard of pseudo-Brood at the invaders, forcing them to retreat. The lab had been shut down, but S.W.O.R.D. couldn’t gain any intelligence from it. Furthermore, S.W.O.R.D. director Abigail Brand was nearly killed during the operation. 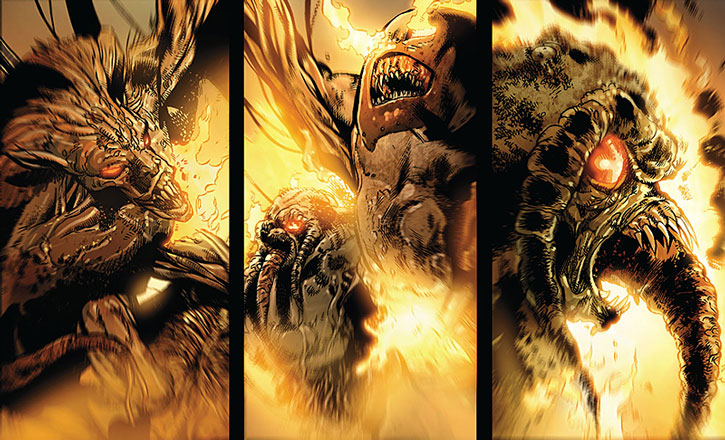 The same day, a clone of a deceased X-Men student was sent to San Francisco by Kaga to catch their attention. It then turned into a bio-Sentinel that engaged the main team – Cyclops, Emma Frost, Wolverine, Armor, Storm and Beast. It was defeated before anybody could be killed. Abigail Brand then volunteered what intelligence she had about Kaga’s work.

Meanwhile, the remains of the bio-Sentinel were brought to Utopia for analysis.

Kaga had his ionospheric cruiser sneak above Utopia. It delivered a sort of Krakoa clone to destroy the Sentinel’s remains and deprive the X-Men of clues. However, Cyclops swiftly destroyed the monster. He then had his team scramble for a boarding-capable jet, having realised that some sort of cloaked aircraft was above Utopia.

His team did board the completely automated mega-ship and discovered Paradigm’s head aboard. After Kaga send a giant zombie Broodified clone of Sauron after them, the X-Men destroyed Paradigm’s remains. Then, they invaded Kaga’s main base.

There they discovered an immense array of kaiju-sized mutant clone zombies reusing material from their historical foes. Most were still partially assembled, but obviously represented months of work. The mutants stormed Kaga’s command center, where he venomously spoke of his hatred for them.

Seeing that he was completely crazy, Cyclops decided to just have him imprisoned and receive extensive medical care/ He knew that Kaga would be furious to receive care from his self-declared worst enemies.

A crazed, bitter, burnt out outcast mostly running on resentment and jealousy.

“I’ve been planning to kill you for a long time. Years and years of murder science. Stealing DNA and information and creating an army.”

“What were you expecting ? A master plan ? A scheme to turn off the sun ? This is the real world. Hatred and disgust are good enough reasons to want to kill people.”

Most of Kaga’s biological constructs were not seen long enough to suggest stats. But here are our observations :

Most stats are speculative. Kaga just wasn’t seen much. 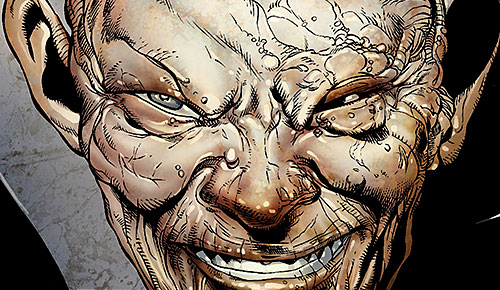 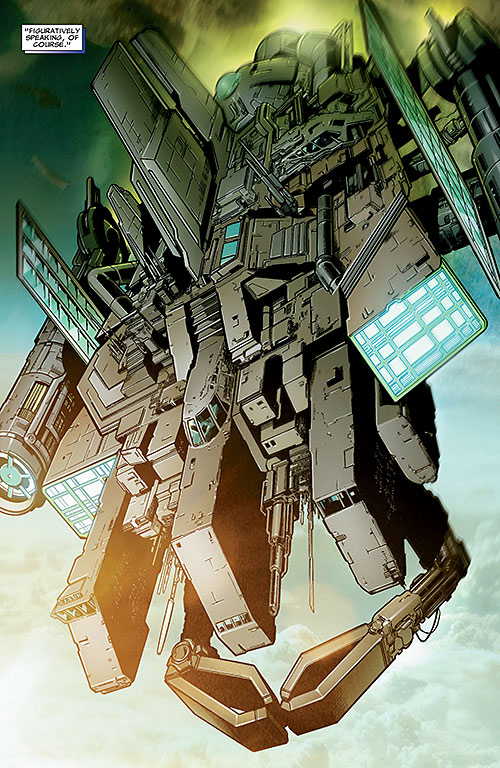 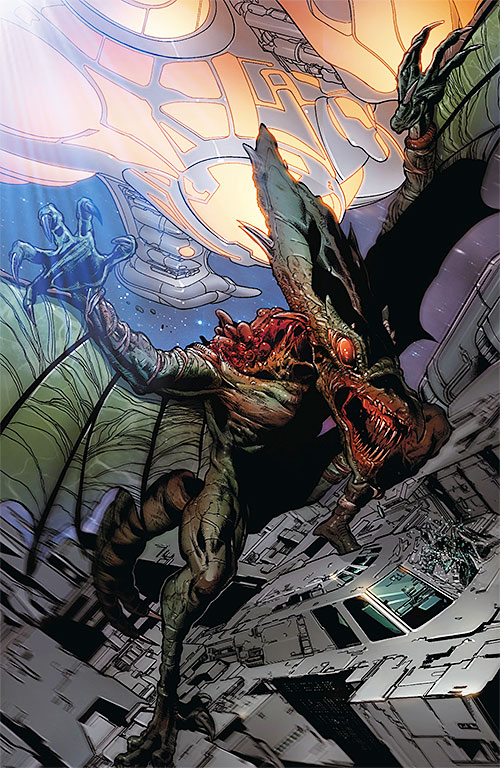 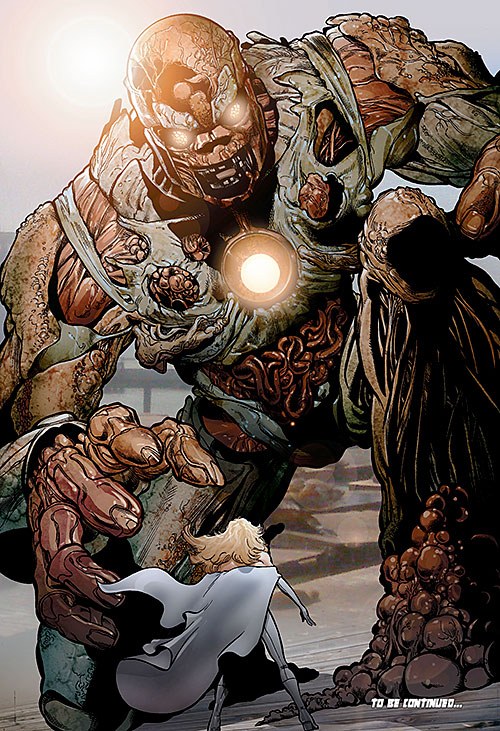