He has the physical capacities of a man of his age who engages in little physical activity.

Born to be heirs to the Clan Gamorra, Sum, Wai and Kaizen Gamorra were given each their own village to rule by the age of 10. By the age of 16, they had disposed of their father and ruled the Gamorra Country. By 18, they started to scare the rest of the world with terrorism. By 20, Kaizen had killed his brothers to ensure his absolute dictatorship.

During the WWII, he joined the Allies to spite their eternal foe, Japan. Afterward, USA turned a blind eye to Kaizen’s atrocities. Until Craven took charge of the national security for the USA, 20 years later.

Craven used John Colt, barely alive after Team One’s first mission, to be his tool in eliminating Gamorra’s threat. They kidnapped Kaizen and put the impostor Colt in his place. Kaizen spent 30 years in Gamorran jails. He was only released by the death of Colt by the hands (or rather, eyes) of Majestic, at the end of “Fire From Heaven”.

He still had loyal warlords to help him resume his reign. But his years of imprisonment had turned Gamorra completely psychopathic. He now wanted the world to fear his Country, his Clan, to fear Him ! His first spectacular action was the bombing of a British airplane, with a biochemical agent derived from the Gen-Factor . This killed 233 passengers.

Bendix dispatched StormWatch Red to retaliate. Rose Tattoo was to kill exactly 233 Gamorran civilians while Flint and Fahrenheit were to make as much material damage as possible in the (short) time Rose was acting. This initiative backfired, however. This only reinforced Kaizen’s hatred for the world.

Some time later, Ivana Baiul contacted him. She wanted to get what little information on I.O. Colt may have left behind him. Kaizen oriented her toward the Minotaur’s Island and she launched her DV8 in a covert operation. With that information, she managed to force her way to IO’s directorship.

When StormWatch was disbanded after the Aliens’ infestation, Kaizen saw the opportunity to exact his revenge. After two years of preparation, he launched a legion of SPBs , all clones of his late brothers.

These were to destroy three major cities of the World (Moscow, London, Los Angeles). This devastation would imprint Gamorra’s symbol on the face of the World, claiming it as his. The Authority interfered, destroying the clones’ facility and most of Gamorra City as well as supposedly killing Kaizen.

Kaizen is an old Asian man. He is the perfect image of the Imperial Mandarin : bald with a long white beard. He wears a vaguely Chinese looking ceremonial dress with many jewels. His fingernails are very long and provide him with a deadly weapon.

He proudly displays the three dots on a circle symbol he and his brothers adopted for their Clan.

30 years in prison has put his mind under a lot of pressure. He is now more obsessed by the fear he can inspire in the world than by ruling his country. Even more ruthless and evil than Colt was, Kaizen kills just for pleasure, without any pretext.

“I only wanted to have some fun.” 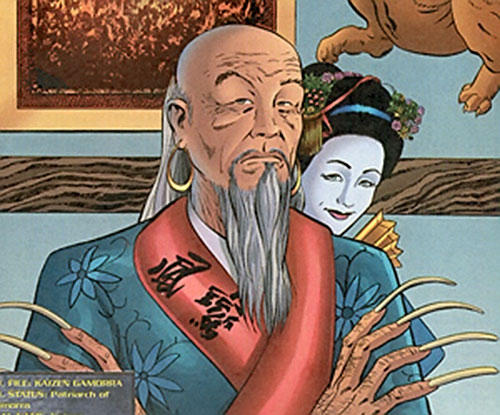