Kamandi is an exceptional physical combatant. He’s capable of defeating a gorilla or two with his bare hands, and able to mow down hordes of enemies with any type of firearm. He’s also sneaky, intelligent and brave.

Thanks to extensive studies in the databanks of Command D, Kamandi is unusually educated in the fields of computers, mechanics, electronics, demolition, history and the practice of any type of vehicle. Actually, he has to be one of the most educated humanoids in his world.

Also, being a young man he’s curious and luckily he’s perceptive as well.

Sometime in the early 21st century, the Earth was ravaged by a great disaster. This catastrophe very nearly was the end of all. Time would now be measure as AD standing not for Anno Domini, but After Doomsday.

Great earthquakes, viruses and much else resulted in a sterile, poisoned Earth. The planet would have completely destroyed if not for the power of Superman. The myths say that Superman saved the world from total destruction, but that the effort cost him his own life. His legend still lives on in this world as the legend of the Great One.

Humans tried to hide in bunkers while the lethal radiation levels on the Earth decreased. But they all perished anyway from various causes. The humans remaining on Earth became savage and primitive like animals.

Animals, on the other hand, were subject to an experimental chemical. It had been created by Dr. Grant in the New York City area during the times of catastrophe. Its purpose was to increase sapience .

All animals from that area would forever have a heightened intelligence and would inherit the Earth. Human were now animals and animals ruled the Earth as ancient men did.

One of the underground bunkers, called Command D, still existed. But those therein had died like in all the other bunkers. The last survivor was the boy called Kamandi, who had to leave the dead bunker system for the surface world. Exploring the new world and adventuring in it, he found humans, mostly savages, and many types of intelligent animals.

Kamandi, who had a really extensive education from the computer systems of Command D, used his skill for survival in this strange, new world. He befriended the human Flower, and later her sister Spirit.

Kamandi fought the businessman and snake Sacker. He won a lethal tournament on the famous Hialehtrack. He fought the armies of Prince Tuftan the Lion and Sarge Ugash the gorilla.

Kamandi was then caught by the gorilla army and kept by a gorilla scientist named Hanuman. Hanuman had found the old diary of a human scientist named Dr. Michael Grant, who apparently had created an intelligence-enhancing chemical named cortexin.

Hanuman had just had a breakthrough when the lions attacked. The entire gorilla society was destroyed by the lions, but the escaped human captives were subjected to heavy doses of Cortexin. Thus, they became more intelligent. These escapees would confer their newfound intellect to their siblings and the fight for humanity’s redemption would start.

Kamandi befriended a tribe of half-intelligent moles and destroyed the giant worm. He joined Ben Boxer to the old Canada, which now was a dangerous mutated, highly vegetative area. He was involved in a war with dolphins. He defeated the descendant of the ESP-monster from a project 412 in an old University.

He joined the ape Flim-Flam and his human circus along with Ben Boxer and his friends. They met flying sharks and giant insects.

Later Ben Boxer and Kamandi, in Canada, joined the army of Captain Pylar the Dog and his European mercenaries (from Brittanek, Germanek, Napoleonek, Garibaldek, Spandar, Grekk and Torrk). These fought for the animal empire called the New Atlantic Testament. With Kamandi’s help they defeated an army of lions.

Somewhere in old America Ben Boxer and Kamandi met a gorilla tribe that worshipped the old myth of the Great One, who had come out from Kla-Kent (who was actually Superman). They awaited the return of the Great One and Kamandi persuaded Ben into posing as Superman.

After hard tests, and along with the gorilla Zuma who possessed a super powerful alter ego, Ben finessed his way to victory. He was rewarded with the old indestructible costume of Superman, but allowed the tribe to keep it until the real Man of Steel returned. They were sure that he still lived somewhere.

Kamandi eventually met other futuristic characters such as Karate Kid of the Legion of Super-heroes, with whom he starred in a virtual movie, and OMAC, the One Man Army Corps. Kamandi participated in incredible adventures. The stories go that he eventually managed to get humanity on it’s feet again under the name of Tommy Tomorrow.

Kamandi is a slenderly built, well-muscled young man. He’s long blond hair and blue eyes. He always walks around in a pair of boots, worn out jeans shorts, and a belt.

Though half-naked, he always carries some weapons with him, usually of the firearm type along with a knife. Kamandi moves in a very agile manner. He’s often performing jumps, tumbles and the like in combat.

Kamandi is a good-hearted and brave boy. He’s proud, stubborn, adventurous and self-sacrificing. He will help anyone in need, human or animal.

As part of his upbringing, with many hours of study before the computer archives, he believes in human accomplishment and that humans are the true rulers of the Earth. He’s read about the myths from before the catastrophe. He is a believer in the ideals of the Great One, who used to be called Superman.

Actually Kamandi’s philosophy would be a combination of the philosophies of both the Superman (ultimate power for the ultimate good, the need to protect the weak and belief in human kindness) and the Batman (the epitome of human accomplishment). He will ally himself with anyone who bears similar philosophies regardless of their origins.

He will kill only when no other choice exists for survival.

He dislikes being called an animal by the now intelligent animals. Furthermore, Kamandi will work hard to raise the consciousness of the animalistic humans to pre-catastrophic levels. Humans who refuse to see reason infuriates him, and will often be called idiots and the like.

The last boy on Earth will combat any animal or monster for protecting the interests and history of humans, but bears no hatred against them while doing so. To intelligent humans he’s very kind and friendly.

Kamandi basically walks the apocalyptic lands in the hope that he can one day help restore humanity to its’ former state. He full well knows that he’s humanity’s last hope.

“I’ll teach you apes not to call me an animal ! This is how a human fights !”

Well, Kamandi is already set in the DC Universe, although he’s probably no longer part of continuity. His world is so cool, however, so that I’d place it straight along with the post-Apocalyptic stories of the Hex series somewhere in the middle of the 21st century (either before or after Hex).

Personally, I’ll use Kamandi in our Apocalypse DC Genre in the following way.

New York and Washington were destroyed in the WWIII. The experiments of the evil dictator and scientist known only as the Doctor were responsible for increasing the intelligence of animals in the area to human levels. The Endworld novels’ Doctor thus replaces Dr. Grant.

Kamandi has fought his own long war against the Doctor in that area, after which the Doctor moved westwards to Denver and Cheyenne to combat the communities called the Family and the Civilized Zone and its’ Warriors.

Kamandi, the last human in the area, remains on the east coast in an attempt to raise humanity back to its’ pre-war state and lives through all the pre-Crisis adventures of his own book.

Equipment:
Some sort of pistol, revolver or even automatic rifle.

Kamandi’s Life Support Advantage is tentative. In some adventures he’s traveled through heavily radiated areas or even radiation belts with no ill effects whatsoever (while other humanoids in that area have needed protection), while other times the need for protecting him against rad attacks has been central to the story.

Since the Life Support Advantage only bestows him a limited protection against radiation it seems plausible to include it in the write-up.

The fact that Kamandi is the last true human on Earth is modeled by the Exile Drawback. 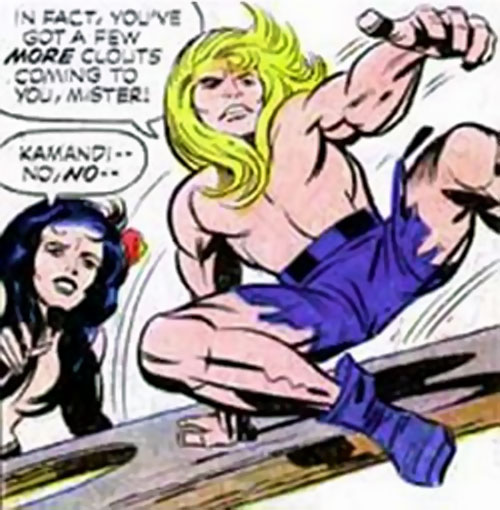