Of course, numerous versions of Supergirl have since “returned”, which makes Kara markedly less poignant than she was back then.

If you’re not familiar with the xenomorphs from the Alien movies, you should first see our profiles for facehuggers and adult xenomorphs. For science.

Kara is in good shape, and maintains a good morale and willpower despite the desperate circumstances.

Having grown up in a post-apocalyptic environment, she has a hodge-podge of survival skills. Most of these centre around technology use, first aid and weapons use.

She’s pretty dang competent with those, really. She may in fact have a gift when it comes to puzzling out advanced technology and jury-rigging it.

The people of Argo primarily employed compact flamethrowers in their fight against the aliens. Kara usually wielded a relatively light flamer, but produced a heavier unit once she was the last survivor. She also had some sort of sidearm, but it was never used.

Being a veteran child soldier with a good command of the battlefield and the enemy, Kara saved Kal-El’s life multiple times. Superman was struggling with his lowered power level and was avoiding killing at all costs.

*If* Odiline was indeed of a similar nature as Krypton, which is a long shot, it is possible that exposure to a yellow sun might give Kara powers. A reflection in her eyes on the very last page *could* be meant as a tiny clue in that direction. Possibly.

Though she looks fully human, Kara is a space alien with a Kryptonian cultural heritage. Yes, that requires some explanations.

A long time ago, on a planet far, far away

She is from the planet Odiline, which presumably had mostly Earth- and Krypton-like characteristics. It also seemed to have had a low technology level. From a Kryptonian point of view, Odiline was reputedly a paradise. 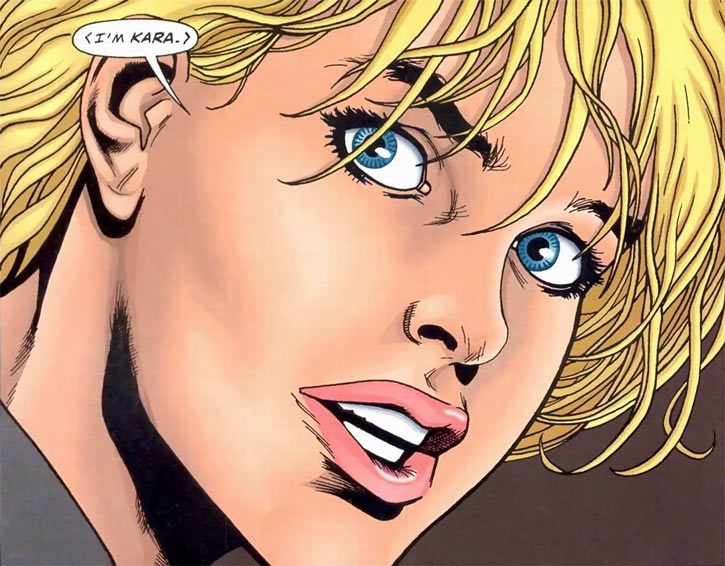 Odiline was visited by an immensely charismatic alien prophet, called the Cleric. He was piloting a space ark in an attempt to save 100,000 Kryptonians from the destruction of their homeworld. Unfortunately, Kryptonians had a vital genetic link to Krypton, and all the refugees perished en route.

(Post-Crisis, part of Jor-El’s most groundbreaking work was to edit this link out of Kal-El’s DNA so his son would survive leaving Krypton.)

Devastated, the Cleric nevertheless landed on Odiline. He requested permission to bury his charges there, which was granted.

The Cleric told the story of Krypton to the very impressed Odilinians. The locals considered that the dead Kryptonians would be their spiritual protectors. They adopted their language, their technology and large chunks of their culture as their own.

The city in which Kara would be born was renamed Argo. It declared itself a sister city to the city of Argo that once existed on Krypton.

City in a bottle

In unrevealed circumstances, Odiline was destroyed. Perhaps it had the same flaw that resulted in Krypton’s destruction. Argo did survive, as it was protected by a dome based on Kryptonian tech. However, it was now stranded on a large chunk of rock in space, and this asteroid held no resources.

The Argonians shot out a number of probes with distress messages, without results. A long time passed, and the resources dwindled. When Kara was 8, the situation was desperate and the supplies nearly exhausted. The equipment, including the food synthesisers, was all falling apart. Starvation riots had begun.

At that point a space freighter crashed right on the asteroid. Everybody aboard was dead. On the vessel, Argosians scouts found a seemingly dead xenomorph queen in a cryogenic unit. The Argosians pillaged the wreck to get badly needed resources, then declared it off-limits.

But a couple of years later, a desperate Argosian sneaked into the wreck, and accidentally revived the queen.

Thus, Kara was about 10 when the fall of Argo began. It seems likely that, with the population getting killed off by xenomorphs, Argo was able to live on for a bit longer than it would otherwise have.

The conditions were those of a total war, with the population steadily dwindling. This in turn allowed for the birth of new xenomorph warriors by implanting captives. Kara thus grew up in awful conditions, and there was precious little hope of survival.

When Kara was 16, one of the probes did reach Earth. Superman (Clark Kent/Kal-El) found out about it, and could understand the SOS since it was in Kryptonian. He made a deal with LexCorp to get a small spaceship, and thus reached Argo.

His powers quickly ebbing from lack of yellow sun radiation, Superman teamed up with Kara. But these were literally the last days, and the last survivors were killed off in an alien onslaught. Kara found herself the last survivor of Argo as the badly weakened Superman helped her survive. But they were stuck on the aliens-riddled asteroid with no way out. 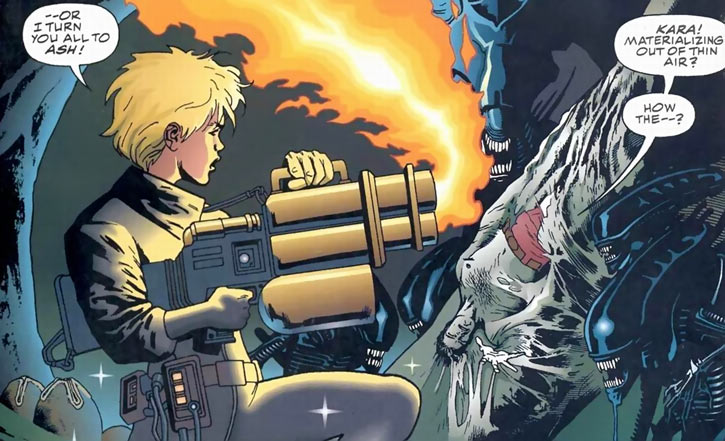 Kara and Kal-El came to consider themselves siblings of a sort. Both were the last survivor of a Kryptonian culture and sharing a culture and a fighting spirit. However, they were eventually captured. Superman was implanted with a queen embryo, and Kara with a warrior embryo.

Kara freed Superman from the queen, but they knew that they would both die soon.

Last survivor of a doomed planet

Using the broken-down teleportation technology of the crashed freighter, Kara and Superman launched a Hail Mary plot. They did secure and repower the teleportation facilities. In a flash of inspiration, Superman then used the platform to teleport the alien embryo out of Kara’s body.

Superman then set up the ship’s power core to detonate, destroying the Argo asteroid and everything on it. At the last second the pair was separated, but Superman was successfully teleported back to Earth. Once he was bathed anew in yellow sun radiation, he crushed and regurgitated the alien embryo.

Though Superman thought that Kara had perished, she had actually managed to launch a lifeboat from the alien freighter. The escape pod flew clear of the explosion in time, and Kara appeared capable of piloting it.

Kara was much smaller than Kal-El. Presumably, the lack of food and other resources made Argosians smaller than well-fed, richer Humans.

Kara is a clever and determined survivor, but she grew up in a terrible environment in desperate circumstances. She *is* holding together remarkably well, but she is clearly worn. She started faltering when she realised that she was the last of her kind and had a chestburster within. Even then, she collected herself with Kal-El’s help.

Living on a battlefield left her with little time to express herself. She had to be extremely goal-focused, and remain vigilant at all times. Still, she developed a rapport with Kal-El, being impressed by his charisma and determination and coming to consider him family.

When Superman briefly flew while holding her, Kara had a brief but intense burst of childlike wonder and enthusiasm.

“Let’s go. To survive here, you have to keep one step ahead of the uglies.”

“I’m tired. Terribly, terribly tired. I have been fighting and struggling and battling and going to war since I was a little girl. I feel like I’m 200 years old ! I feel like I’m drowning in a gruesome nightmare that will never end. Let them come for me. I don’t care anymore. All I want to do is sleep.”

Connections:
Would have a High Connection to Superman if she could contact him.

In this setting, the xenomorphs seem to have — at all stages of their life cycle — a -1CS RV Partial Attack Vulnerability toward flames. It might even be -2CS for freshly-emerging chestbursters.

Writeup completed on the 6th of December, 2016. 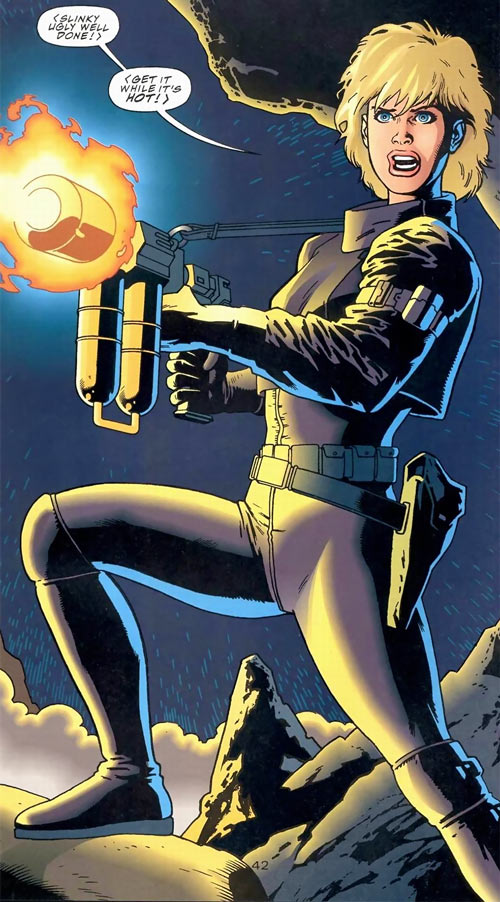