Crossgen was one of the new super-hero comics publishers that emerged during the 1990s. But that was years after the big wave with Image, the Ultraverse, Dark Horse Heroes, etc.. Crossgen started in 1998. Like most such new shared super-universes it was interesting, had potential, and was ultimately short-lived.

The Karaki have two distinct forms, between which they can switch in a few seconds.

The first is an apparently harmless, roughly humanoid form, which they adopt to question their victims while in a more sedate environment, when the victim will be relaxed. 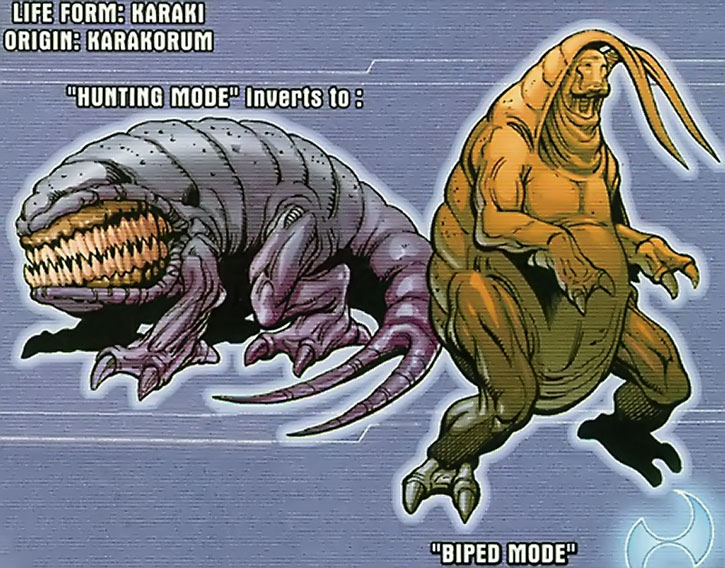 Their other form, used when hunting, is a large quadruped, whose tooth filled mouth extends halfway around it. This hunting form can extend a stinger which contains a powerful sedative, and allows them to absorb memories and images from the victim’s mind.

The Karaki live a double life. They look like kindly bipeds around their village, but change to a more bestial form when they hunt.

When an unsuspecting alien would land on their world, they’d initially hunt their new prey, stinging them unconscious and getting an idea of their home planet. The victims would then wake up in their village, where the apparently hospitable humanoids would gain their trust, and question them to fill in their knowledge.

Once satisfied that they had enough knowledge, they decide whether or not to invade, almost always deciding to do so, and so would turn on their victim.

They are able to make flesh and bone as malleable as taffy, which they then stretch and reshape into the shape of a big arch. Within this arch they are able to create a warp portal leading to the victim’s homeworld. The victim is still alive through this process.

All of the Karaki then go through the portal, breeding exponentially and consuming every member of the victim’s species. When the victim’s species is extinct, they turn on each other until there’s exactly as many left as first came across, who then all return home.

When the Negation conquered the area of space in which their planet resides, they soon learnt the Karaki’s true nature. The planet was quarantined. Made accessible only by teleportation, and only at the Emperor’s discretion, it became the ultimate form of punishment, wiping out most of the victim’s species.

When Lawbringer Qztr sentences Obregon Kaine, Komptin and his pet Kaliman Retriever, Gullit, to Karakorum, the Karaki, after Kaine escapes them, finally capture, Gullit. Using him, they create a portal to Kalima, where they begin to hunt down all the Retrievers.

Their hunt is met by resistance from the natives, and the Negation Military.

In their bipedal form, they appear considerate and gentle, but their true personality of a vicious predator is on full display in their hunting form.

“You were stung by a Karaki. Fortunately we managed to rescue you before they ate you. You are a guest now in our village. You are welcome to stay until you recover from your ordeal.”

The Karaki know the secrets of a ritual which allows them to deform the still-living body of an intelligent victim (whom they usually sting or otherwise incapacitate beforehand). It transforms them into a structure through which they can travel to the victim’s homeworld.

The ritual requires an unknown number of Karaki, but it seems that around ten of them can perform the ritual within minutes. It’s unknown how this timeframe would alter with fewer participants.

The manipulation of the victim’s body (Matter Manipulation (Organic Matter): 10) allows them to turn its bones into a malleable substance. They stretch it well to make a sizable opening through which they can travel. The victim somehow remains alive through the process, as they need to remain so for the portal to work.

At the completion of the ritual, the victim’s body is a portal to their homeworld (Warp: 55). The Karaki travel through en masse, hunting and slaying every member of the victims species. They leave other species alone, as long as they don’t try to interfere.

They remain until the entire species has been wiped out, breeding exponentially as they go.

When they’re finished, they turn upon themselves until there are exactly as many of them left as originally came through the portal, at which point they return home. 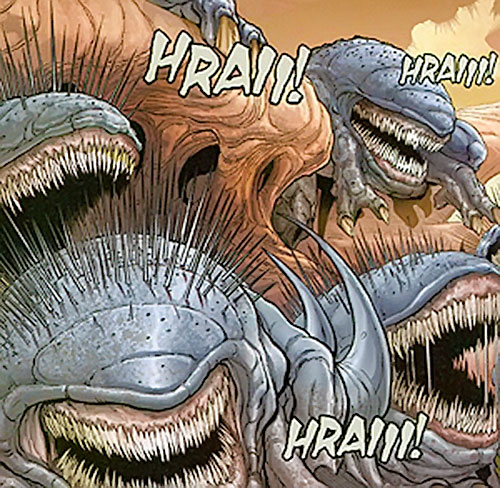