Like all members of his race, Karb-Brak has Kryptonian-level  super-abilities. He evidenced the basic strength, durability, flight suite, along with super-breath, but none of the fancy stuff like super-senses, super-intellect and the super-like.

He also had some other, random-seeming abilities. He could :

Generally, Karb-Brak evidenced every little power that could make the plot convenient and/or provide readers with a quick, visual recap of what had gone on before. So feel free to give him more such abilities as convenient.

Karb-Brak is a typical example of those Superman opponents who are repeatedly said to be as powerful as he is, but are not. He barely could hurt Supes. He also had to keep all his Hero Points  to withstand attacks (since he was generally scared for his life at that point) and to operate the Psi-Machine.

Kar-Brak comes from a populous planet far, far away in the Andromeda Galaxy. There, everyone has quasi-Kryptonian powers.

After he reached adulthood, he developed a rare disease. It was an allergy to the members of his race that would inevitably prove fatal. With no place to go into seclusion, the doctors searched for another world that could host Karb-Brak during his recovery. They found Earth.

Karb-Brak reached Earth, and disguised himself as an human. His recovery started nicely — until he discovered that Superman was so like his native super-race that he was allergic to him, too. This planet wasn’t big enough for the both of them !

Thus Karb-Brak made desperate attempts to get rid of Superman. Using his Psi-Machine, he scanned his subconscious memories to locate the passengers in the bus where he had his latest outbreak of fever. Kar-Brak’s reasoning was that Superman must have been riding that bus in his secret identity.

Narrowing possibilities down to Steve Lombard and Clark Kent, he got close to both journalists by passing himself as a window washer. The alien then erroneously reached the conclusion Lombard was Superman. Superman intervened and saved Lombard. Karb-Brak sneaked away.

Second stab at it

Karb-Brak deduced that Superman was Clark Kent. Using his wondrous Psi-Machine again (and by “wondrous” I mean “incredibly blatant plot device”), Karb-Brak changed the mind of everybody in Metropolis. They all became huge fans of Clark Kent, hounding him and mobbing him.

Clark fled from the crowds, only to run in Karb-Brak. The Andromedan apparently hoped the gaggle of civilian and the matter of his secret identity would hinder Kent. This worked at first, but then backfired. When Kent eventually fought back, he was energized by the huge crowd cheering for him.

Karb-Brak answered with an ultimatum. Superman should leave Earth or be responsible for his death. Now irrational, Karb-Brak fled. He fought with Superman once more as his disease reached a new stage, as he had but hours to live. It now deformed everything around him. In the battle, Superman punched him so hard he disappeared over the horizon. Karb-Brak couldn’t be found.

Karb-Brak eventually flew back to his Psi-Machine. He attempted one last gambit after watching Clark Kent make the Fourth of July announcements on TV.

As the Psi-Machine was revving up, Karb-Brak (now a sort of cloud of red dots due to his disease) engaged Superman in combat once more. By that point, he had but a few minutes to live.

The tricky alien spun on himself in a certain way while flying away. Assuming this was some trick to vibrate away from this dimension , Superman matched his spins. The distant Psi-Machine picked up this super-energy… and gave him a kick that sent him two hundred years in the past !

With Superman gone, Karb-Brak, who had been minutes away from death, immediately started recovering.

Superman, his mind clouded by the Psi-Machine, reappeared in 1776. He now was a journalist reporting on the newly-signed Declaration of Independence .

However, even though he did not know he had powers, he performed several super-feats to save lives and defeat nefarious British spies. The dissonance with the brainwashing from the Psi-Machine eventually made him realize he was Superman and came from the future.

After saving the Declaration of Independence from King George’s men, Superman easily flew back to the present. After preparing at his Fortress of Solitude, he flew to Metropolis to confront Karb-Brak anew.

There, using the research he did, Superman accelerated the death of Karb-Brak from his fever. Then he operated on him while he was clinically dead, the only point at which Karb-Brak could be saved.

Then Superman, for some reason, used the Psi-Machine to make Andrew Meda forget everything, including the fact he was a superpowered alien who had died fighting Superman. Zatanna is a bad influence, I tell you.

Return of the alien

Weeks later, Karb-Brak returned. His allergy was inexplicably back, he remembered that Clark Kent was Superman, and he was again determined to kill him so he could survive his fever.

He eventually collapsed, and Superman operated again. For a few minutes it seemed to have failed, but Karb-Brak came back from death a second time. The fever had died before he did. Rational again, he explained that his new bout of maddening fever had nothing to do with Supes. It had been caused by the arrival of another “super” being — Vartox — to Metropolis.

The dashing Vartox… okay, I’ll admit it I’m only saying he’s dashing to make Vartox fans happy. He actually was a petulant, manipulative git in that story. anyway, the dashing Vartox had come to Earth to enact a, ahhhh, very special plan.

Vartox tried to convince the Metropolis Marvel that he, Vartox, had been Earth’s defender all along. And that Superman merely was a deluded alien who had recently come from another world.

According to Vartox, Superman’s powers had been fading. But he had discovered that this could be corrected by exposing himself to the rare elements Karb-Brak would emit during one of his fever-rages. Thus, Superman repowered himself, nearly at the cost of Karb-Brak’s life. This convinced Supes that he had been the great defender of Vartox’s planet, Earth, all along.

This twisted manipulation’s goal was to have Vartox, who had lost everything, be hailed as a great and beloved hero on Earth. He essentially wanted to steal Superman’s popularity.

Superman tricked him in return by pretending to agree to leave with his wife (actually Lois Lane, disguised in the likeness of Vartox’s lost wife). Seeing this, Vartox started crying and ordered them not to leave (it’s the Silver Age – everyone has the emotional maturity of a 11-year old).

Vartox admitted it had all been a scheme and flew away. He took the cured Karb-Brak with him and promising to take him back home.

Although most would assume he’s the victim here, Karb-Brak is actually a prick. He mostly has contempt toward humans. He considers them to be inferior, under-evolved, uncivilised savages, with only Superman being a true peer for him.

Then it became apparent he could not murder Superman, and that the Man of Steel could beat him up. So Karb-Brak started whining and exploiting the fact Superman would not kill anyone, squarely slamming his burden on Supes’s shoulders. He’s a bit like those tourists who criticise everything in foreign countries because it’s not like home, I suppose.

Karb-Brak seemed relieved after having found a place where he could survive his condition. And he more or less panicked when he realised there was another, unforeseen problem that could deny him his medical salvation. After his brush with death, he seemed to be less of a git. He appeared to be grateful toward Superman, and OK with his new life as a mere human worker.

In fact, he had become so mellow and reasonable he pardoned Superman for everything. This held even after Vartox convinced everyone Supes was a delusional alien who had exploited his condition to revive his powers. Karb-Brak’s reasoning was that it was OK since Superman’s goal was actually noble, and that he needed his powers back to protect the world.

Perhaps, as “Andrew Meda”, he found religion or something.

“But our world abounds in people ! There is nowhere for me to go into seclusion ! What am I to do ?”

(Attacking Steve Lombard) “My [psi-machine] tells me you are Superman ! I’ve got to kill you before you kill me !”

“Both of us can’t survive on this planet, Superman ! That means you have to go !”

Drawbacks:
Misc.: (against opponents with a base physical OV of 08 or less, Karb-Brak’s AV cannot exceed his opponent’s. This is a cap for a specific action, not a Loss that has to be Recovered), Exile (his native world), Fatal Vulnerability (sort of, see below), Creepy Appearance (only 5 pts due to also having Insta-Change), Secret Identity.

Equipment:
PSI-MACHINE [BODY 10, Omni-Power: 10, Bonus; Omni-Power as a +60 Volume modifier (+12), Note: The HP costs of Omni-Power are paid by the user, and the GM has full veto powers over what is allowable at any point (such rulings do not have to be consistent over time)].

The usual — this pre-Crisis character was written on a post-Crisis scale, and I’ve used the approach where Superman has a DEX of 10.

In fact we have a fine example of this here. Karb-Brak has an easier time hitting Superman than a TV anchor (though said ordinary guy is spending everything he can on OV). It’s a Silver Age DC story, so trying to hammer some sense and coherence in it is a bit difficult.

Fever / Till you sizzlen / But what a lovely way to burn

Whenever Kar-Brak and Superman are within 2 APs of each other, they will start developing the fever within 1d10 Phases (roll for each). This is automatic. The Range at which this effect occurred kept growing after the initial exposure, until it would have covered the entire planet.

Superman starts losing 2 APs in every Attribute and Power per Phase until he bottoms out at 06 for Attributes and 02 for Powers. These losses are Recovered instantly when Karb-Brak is no longer in the area of effect.

Given his super-physiology, the fever means Karb-Brak develops Flame Being: 08, Always On. The first time he caught it, he eventually melted through an entire city bus. It also gave him an SIA toward direct, violent solutions while it raged. Lastly, it resulted in the automatic loss of one AP of current BODY every Phase from the disease.

When the fever reached its final phase, both the Flame Being and the SIA disappeared. But he started warping buildings, machines and people in a volume of about a city block around him. It looked as if everything was seen though extraordinary heat. This gave a -2CS to all AVs in the area, except his own. When Karb-Brak reaches this stage, he only has a few hours to live.

The next stage broke his body into an humanoid cloud of magenta blotches/spots – though he still behaved like solid matter. At this point, though, he had about 20-30mn left to live.

Source of Character: Action Comics around 1976-77. 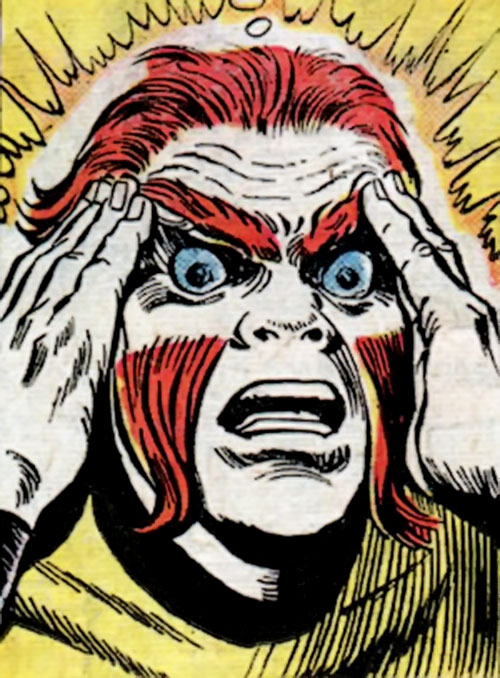 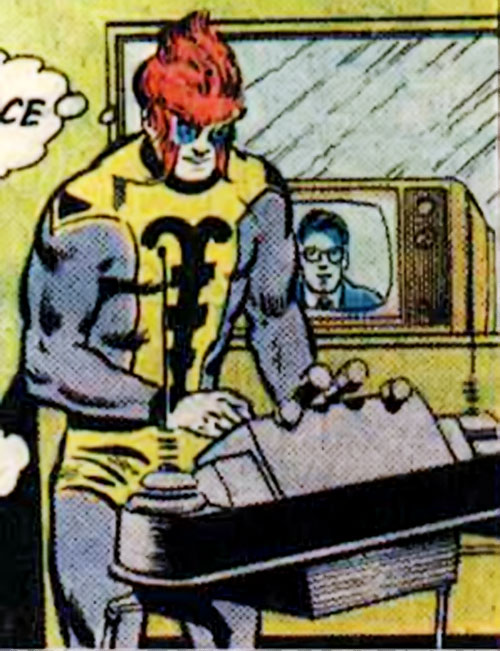 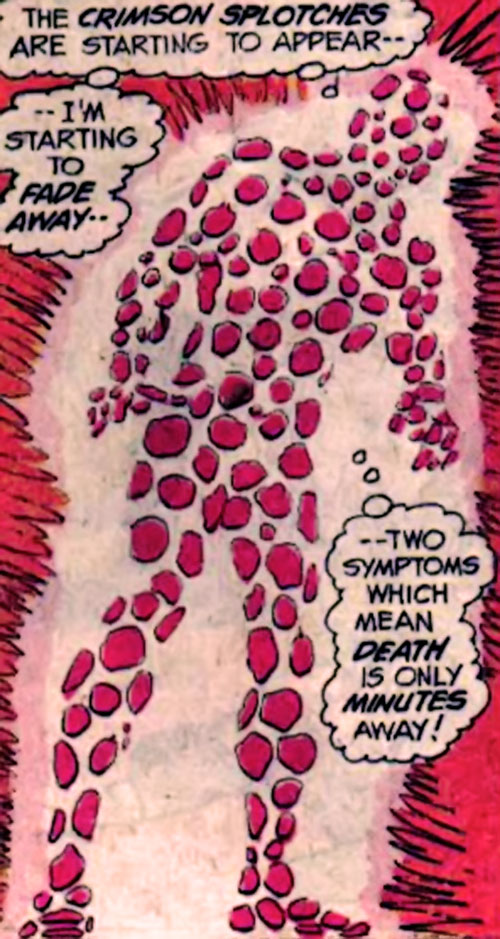