Kari is a largely forgotten Green Lantern supporting cast/love interest character. Her core material and first appearance was back in 1979. But it *was* a classic era for the book, the Green Lantern/Green Arrow saga.

Having her sneak back as a supporting character in a tabletop RPG campaign could be oddly could. Plus, if the players get completely stuck, her power is to just know stuff. Yes, it’s a heavy-handed approach, but Ms. Limbo never was a subtle story element.

Limbo has undefined precognitive powers. These allow her to fuzzily perceive all sorts of things about the future, destiny and dangers.

A sense of impending danger to a specified person and a fairly precise location is as extensive as it gets. Oftentimes it’s more like a jumble of diverse minor information. Such as knowing that a person has “G.G.” as his initials and has a great destiny involving the colour green.

Limbo does her best readings when touching something associated with the person she’s reading about. Or if she can use fortune-telling equipment such as crystal ball. Visions obtained whilst touching something are sudden and can occur without Limbo willing it. Visions via scrying and fortune telling build up much slower and are always voluntary.

Though the information she can perceive is limited, her range is colossal. Kari has sensed events happening near Saturn (and later events happening on Oa), or 500 years in the past, through her psychometry.

Kari Limbo has a few minor psychic abilities beyond her gift of clairvoyance :

Our game stats for Ms. Limbo takes the conservative approach of modelling every demonstrated ability on its own. But in DC Heroes RPG terms it is entirely possible that Kari has an unusual “do anything” power, and/or a collection of Rituals. Her abilities seem determined to avoid classification and quantification, though.

Allegedly, several of the curios she owns have been in her family for a thousand year. And several of them happen to be genuinely mystical and/or alien artefacts. Limbo doesn’t know the properties of those, though. To her they are just prized heirlooms.

Kari Limbo, a psychic, apparently spent much of her youth with the Balto Carnival.

One evening, she met a customer named Guy Gardner. Using her crystal ball foretold that he would have a great destiny that had been thwarted so far. Gardner asked her out, and they soon started a relationship despite their very different personalities.

Some time later, Hal Jordan came to meet Gardner. He explained how Gardner was the original choice of the Guardians and why Jordan had been chosen instead. Which explained Limbo’s scrying about Gardner’s destiny.

Jordan made Gardner his replacement as a GL while he strove to get his ring repaired. While Gardner enthusiastically took the job, he later disappeared in strange circumstances, while recharging his ring.

You can call me Hal

Kari was devastated. She even hit Hal Jordan when he came in with the news. However they slowly fell in love. Jordan was, at that point, extensively adventuring with Green Arrow (Oliver Queen). He thus took the mourning Limbo to Green Arrow’s companion, Dinah Lance, for moral support.

Ms. Lance (aka the Black Canary) was at that point running a florist’s shop. Since she liked flowers and wanted to stave off depression, Ms. Limbo volunteered to become her assistant.

Within minutes she demonstrated the worth of her psychic powers, sensing the impending deadly threat to Green Arrow (who was fighting Professor Ojo and the Crumbler). This allowed her to guide Hal Jordan to the scene so he could save his friend.

Kari joined the GA/GL duo for a bit, provided them with extrasensory intelligence to fight menaces. In particular she helped catch the Crumbler, whom she realized had sabotaged Gardner’s battery and thus was responsible for his apparent death.

Hal and Kari’s relationship and intimacy developed at an incredible speed. They soon decided to become married. However Gardner, who was still alive but trapped in the Phantom Zone, had visions of this relationship and swore vengeance. He thought that Jordan and Limbo had betrayed him to get rid of him so they could consummate their liaison.

Using the Phantom Zone projector in Superman’s Fortress of Solitude, Gardner made his way back to Earth. Sensing his return Kari, who still loved him, fainted.

In the Phantom Zone, Superman and Hal Jordan discovered that General Zod and two other exiled Kryptonian had allied with Gardner. They were manipulating him and adding their willpower to his to control his ring. Jordan barely managed to save Superman and had to retreat. He and Kari decided to cancel the marriage since Guy was alive.

Jordan came back to the Phantom Zone to rescue Gardner. But this time the demented GL was whisked away by Sinestro. The ever-determined Jordan reached Qward and rescued Gardner. But Guy was discovered to be in a quasi-catatonic state once he was on Earth.

The prognosis of the doctors wasn’t good. The brain damage Gardner had suffered was unusual, and they didn’t expect a solid understanding of it within less than six months. Limbo nevertheless confirmed her choice to leave Jordan and stay with Gardner. She announced that when Gardner would recover his mind she could fully choose between the two men.

After years in a catatonic state, Guy recovered his consciousness, though he was now in a state of severe disorientation. Kari reached the Green Lantern Corps on Earth (Hal Jordan, Arisia, Kilowog, etc.) and told Hal about Guy. She also had a vision that revealed that Gardner was being confronted by a Guardian of the Universe on Oa.

Hal successfully pleaded with Appa Ali Apsa to have Guy Gardner keep his ring and be handed over to them so he could heal.

Kari confronted the new Guy Gardner, but his personality has been radically altered. He was now a shallow, macho, insufferable jerk. He vulgarly rejected her while leering at the much younger-looking Arisia, who then was Hal Jordan’s lover. This man had nothing in common with her Guy.

Kari tried reverse psychology to convince him not to attack the Soviet Union, as she deduced he soon would. She seemed to succeed. But the new Gardner was too pig-headed and retained a level of base cunning. He thus soon assaulted Soviet territory out of blind, self-aggrandising fanaticism, very nearly triggering World War III.

Gardner was somehow allowed to stay with Earth’s Green Lantern Corps. So he spiked the drinks with a sort of super-alcohol, making everybody completely drunk. Limbo, who was attending a nearby party, sensed this. She came to the H.Q. of the GLC, taking Gardner by surprise and injecting him with his own super-alcohol.

Even drunk, however, he casually rejected her. Kari finally admitted that the part of him she loved had been irrevocably destroyed. Respecting the relationship between Jordan and Arisia, she told them that she was moving on.

Limbo took years to get over her grief over losing Guy Gardner. She still clung to mementos of her relationship with him. This was once exploited against her, when the villain Goldface had her summon Guy Gardner to her carnival tent to make him an offer. This of course led to a fight that wrecked parts of the carnival (though G’Nort helped fix the damage).

Some months later, Gardner briefly went to Limbo as he sought Goldface. She gave him broad directions to find him. Gardner now basically considered Limbo to just be a convenient way to find villains, especially Goldface. When a sniper shot him with a gold-plated bullet, Gardner thus went to check with Limbo. He practically forced her to perform a scrying.

He also roughed up the manager of the Carnival, who wanted to serve him as part of legal action. The manager’s goal was to force Gardner to pay for the damage he had previously inflicted to the Carnival.

At this point, Limbo had renounced her lingering feelings. She had come to consider Gardner in an objective fashion – as a rather repugnant individual.

Kari Limbo was in Coast City when it was destroyed. She is assumed to have been one of the numerous victims of the Cyborg Superman.

Limbo often has a languid, dream-like manner to her speech and movements.

Kari is a mysterious woman, surrounding herself with odd curios. She’s an actual Romani (the word “Gypsy”, though it was used in these old stories, is impolite), not a carnie styling herself as one. But her lifestyle is close to that of the average American carnie, and she later settled in ordinary homes.

She’s open about the fact that she’s had many lovers. She is always very affectionate with her current beau, though without quite crossing the border into being clingy. She knows when it’s time to move on, though, despite her need for affection.

Kari doesn’t hide that she can foretell the future and has paranormal knowledge of other people. This is even though the spookiness of this can repel potential friends and lovers. She considers that it’s a key part of who she is, and accepts to live with those downsides.

In rare cases, she will try to defy destiny out of love, as she did with Guy. This is despite knowing that she’s doomed to fail.

“Yes… you are living a most unusual life… there are many secrets surrounding you… Enter, sir… I am Kari Limbo…”

“He was my love, and the Gypsy woman does not forget easily !”

“I cannot say ! My mental powers are erratic… uncertain ! Sometimes touching an object belonging to a person I seek works… sometimes not !”

“It is not good for a Gypsy woman to be alone ! Hal… he relieves me of my loneliness ! I love him !”

“All day long I’ve known that someone was coming – I had a feeling it would be someone I did not want to see.”

Kari Limbo’s Danger Sense power is quite comparable (and just as fuzzy) as Ms. Marvel I (Carol Danvers)’s one. It is governed by broadly similar rules: 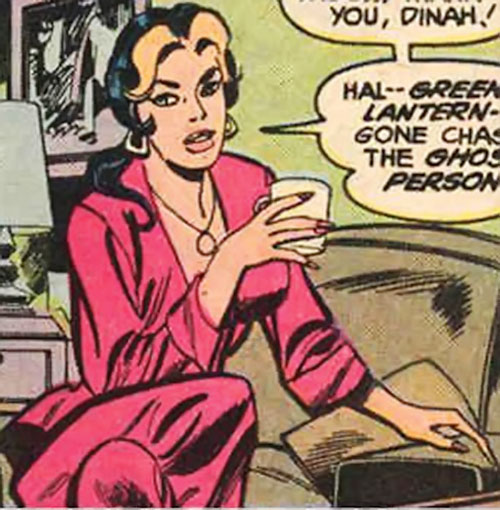 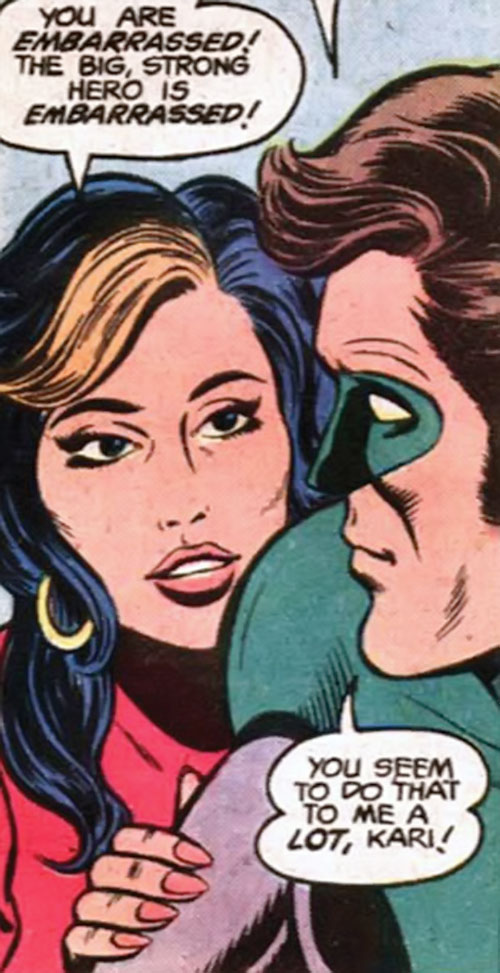 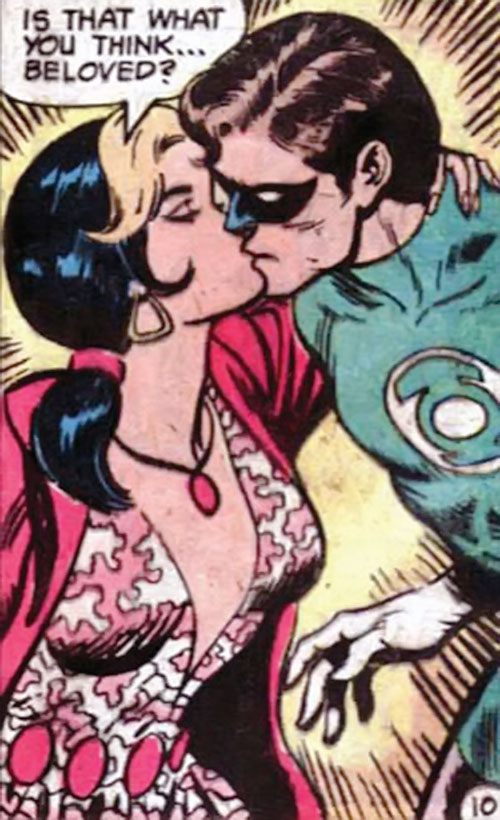 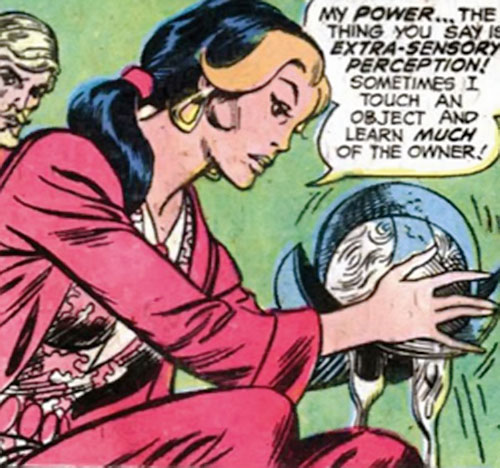 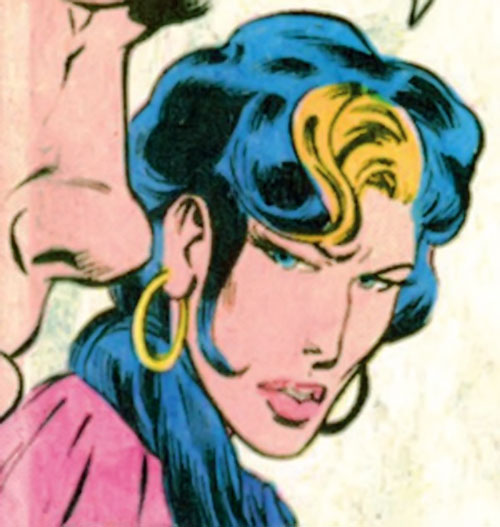 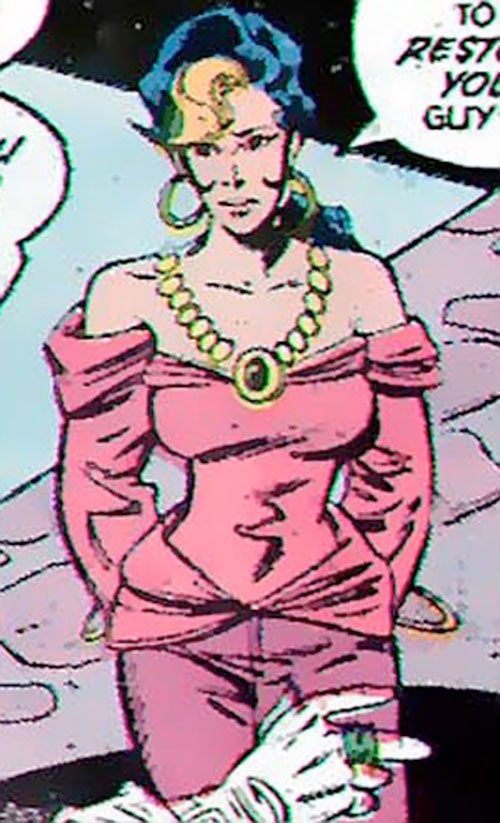 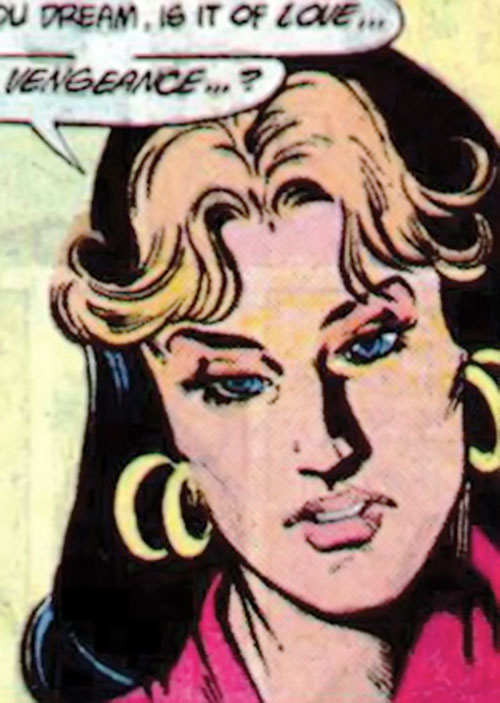