Karla Sofen is a Marvel character who appeared in 1975, albeit in a cameo where she’s not named. In 1978 she becomes Moonstone, who will become a semi-classic Marvel villain. The character will later receive a lot of development as she becomes a member of the Thunderbolts super-team.

This profile covers her early life. Not that we really expect her to appear in a RPG campaign at this stage of her life, but it allows us to present the information about Sofen in shorter, more focused articles.

As you’ve gathered, this profile is part of a chronological series that goes :

Sofen is a trained and experienced psychologist. She’s also ace at manipulating people, lying and deceiving.

Beyond her personal intelligence and education, she learned many advanced techniques from Dr. Faustus. These include a superior poker face (in DC Heroes RPG terms, Artist (Actress)) and how to modulate and change her voice to trigger emotional responses (Artist (Actress) and Charisma). She can wrap individuals around her finger and become popular among groups in record time.

Sofen’s time with Faustus also gave her a solid understanding of varied sorts of high technology. It also seems to have given her a background in security systems, given how she breaks into Gamma Base.

Generally speaking, she evidences a superior intelligence, though she’s visibly inexperienced during that era.

Though Faustus’s vocal manipulation tricks gave him quasi-hypnotic powers, Sofen is far less accomplished. Still, suddenly changing the emotional charge, apparent age, tone, etc. of her voice can confuse and evoke a strong emotional reactions. THis works best on unusually naïve, stressed-out or unstable subjects, such as the Hulk or General Ross.

Sofen’s characterisation during her early career is difficult to reconcile with the flashbacks and her characterisation in Thunderbolts. Nothing major, mind you, but a pretty different vibe and level of competence.

This suggests some interesting No-Prize Hypotheses .

An interesting hypothesis (and we shall as usual insist on the fact that it’s an *hypothetical*) is that she became Moonstone quite young.

And of course, changes in her characterisation can be credibly explained by her growing older and learning from her mistakes.

Thus she could have:

This is an unusual and aggressive (but not outrageous) timeline that works well when reading her early appearances. She has mannerisms and attitudes that are reminiscent of a student, not an established psychologist. And she looks quite young.

Several captions support this. Especially one where soldiers consider a psychologist who has already spoken in trade conferences as a “kid sister”.

Then she ages at the normal rate… for a comic book character.

Sofen was stated to be 33 during the Dark Reign story arc. Even assuming a compressed timeline, that means that she was at most 28 when she became Moonstone, and probably less.

There are minor contradictions as to whether Dr. Sofen is a psychologist or a psychiatrist. There are important differences between the two. Psychiatrists are more akin to physicians and can prescribe specialised drugs, whereas psychologists have a more academic training and rely on different therapeutic approaches.

Most references describe her as a psychiatrist. This would involve a completely different chronology for her early life. Rather than the academic training as a psychologist, she’d be trained as a medical doctor with a specialisation in psychiatry.

It’s impossible to tell from the material. Especially since her time with Faustus would have given her medical skills (such as the use of drugs) even if she’s not officially a medical doctor.

A possible (and *thoroughly hypothetical*) approach that reconciles everything is that:

In this scenario, the hypothetical timeline above is unmodified.

She also could have worked on acquiring a MD in Psychiatry as a second diploma during her late 20s or early 30s. During Dark Reign she again mentioned having one, though as noted it could easily be a fabrication. Dr. Sofen — if she’s actually a doctor… — is much more likely to cheat and lie than study for exams.

Mr. Sofen was the hard-working butler, and Mrs. Sofen the maid. The sumptuous manor was owned by their employer Charles Stockbridge, a multiple Oscar-winning producer and a figure in the Hollywood Hills social circuit. Even little Karla was a Stockbridge employee of sorts. She was a companion for Charles’ daughter Deanna, who was Karla’s age.

Karla hated everything, feeling jealous of all the privileged people who surrounded her as her parents did all the grunt work. This jealousy was exacerbated by her razor-sharp intelligence. She felt that her smarts made more deserving of the luxuries that were denied to her yet showered on everybody around her.

Karla became a manipulator, using her smarts to convince people (particularly Deanna, who was much less bright than Karla) to give her nice things. Even as a teen she was angry, deceitful and a user, hating how superior most people she sort-of-knew behaved.

Mr. Soften died of a heart attack at 42, presumably from overwork. A new servant family had to be hired, and though the Stockbridges offered Marion Sofen a place on the estate, she preferred not to live off their charity. She returned to her parents’s home in Van Nuys, along with her daughter. This house was old, run-down and difficult to maintain.

Holding two — occasionally three — menial jobs, Marion Sofen saved as much as she could. With these savings, Karla could make her proud by going to the best schools. Mother and daughter owned very little, which Karla was ashamed of. The young woman apparently graduated with a Ph.D. in Psychology, presumably from the UCLA.

During her youth, Karla Sofen was 200 lbs. of bitterness in a 130 lbs. bag. She felt contempt for everyone – even for her mother, whom she felt was a fool to work so hard for her daughter’s good rather than take care of herself. She viewed this as stupidity, and defined herself as the opposite of stupid.

Sofen saw her doctoral training as her path toward even better exploitation and manipulation of idiots and vulnerable persons. A weapon to be the exploiter and never again the exploited.

The doctor is in

Dr. Sofen started a private psychological counselling practise, catering to wealthy Los Angelinos. This started slowly, presumably as she leveraged childhood connections to meet prospective clients. But she eventually built up a clientele.

Being essentially a predator, her goal was not to heal but to make her clients dependant on her ministrations. She walked a fine line between making them feel increasingly better yet never actually curing them. She never hesitated to lie, cheat and manipulate to keep ’em coming back.

While at that point Dr. Sofen was apparently well-off, her own issues tugged at her. She hated to rely for her income on sick, rich people who could leave at any moment. She didn’t want to depend on anyone or anything so as to never be lorded over.

For whom Faustus would destroy…

Sofen soon met another sinister shrink, the colossal Doctor Faustus. They shared an ambition, a lack of scruples, a ferocious drive and thirst for power. Faustus became Sofen’s mentor, lover and sugar daddy. Through him she started developing her own web of underworld contacts. 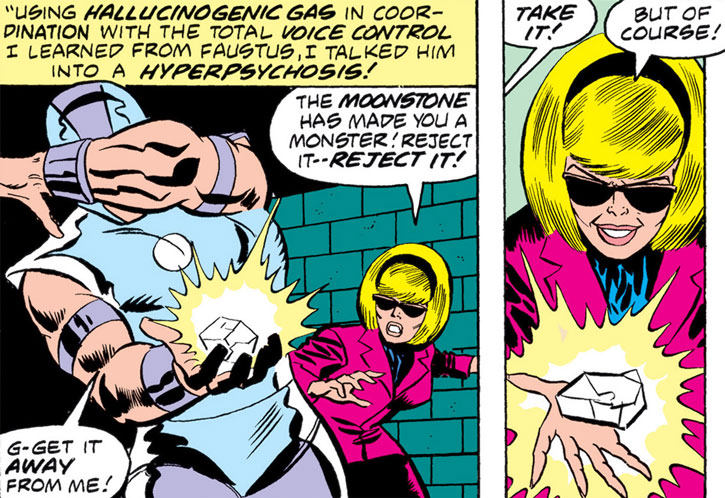 Excited by the possibilities that were opening up, she even became a gun moll during one of Faustus’s most famous operations. That one featured a jumbo jet filled with hardened criminals as part of a grandiose blackmail attempt against the City of New York.

Sporting a skintight orange catsuit, a domino mask and decorative bandoleers of 7.62mm ammo, Karla helped as a sort of stewardess during the flight, running logistics. However, Captain America accidentally boarded that flight and defeated Faustus, who apparently fell to his death.

Cap landed the 747, having surreptitiously arranged for an army of NYPD officers to serve as the welcoming committee. The slim Sofen hid from the police in one of the overhead storage compartments then got away. She was never identified – in part due to her mask, and in part because most men aboard had assumed that she was just Faustus’s cocotte.

Her anger unabated, Dr. Sofen continued to ravage lives for profit and revenge. Later records show that she drove eight patients to suicide and six more institutionalisation. That was only discovered later – at this point Dr. Sofen didn’t have any sort of criminal record.

Still, she was scandalous. In particular, a lecture she gave during a psychiatry convention in Utrecht was considered outrageous. But it also attracted the interest of Dr. Leonard Samson, a psychiatrist with a reputation for unconventional work.

I wish I was the moon

Sofen talked her way into the correctional system to get the opportunity to counsel the first Moonstone. This was the psychotic Lloyd Bloch, who derived his superhuman powers from an alien gem. Dr. Sofen’s actual goal wasn’t to cure the super-villain. She was there to steal his special gem and obtain super-powers.

Sofen pulled a classic Faustus move. She sprayed Bloch with hallucinogenic gas, likely stolen from Faustus’s stash. She then hypnotically modulated her voice to damage his mental state and direct Bloch’s delirium.

Bloch thus hallucinated that the alien moonstone was turning him into a terrible monster. In this induced psychotic state he rejected the gem from his body, begging Dr. Sofen to take it away from him. The criminal shrink gleefully took the moonstone. However she was surprised when it exploded in her hand, immediately merging with her as it had with Bloch.

The shellshocked and powerless Bloch was imprisoned in a normal cell. Sofen dissembled, explaining that her patient had burned out his power in a fit of psychotic rage. The warden, glad to save on the costs of running a cell that could hold Moonstone, did not press the issue.

Sofen soon discovered that she could now manifest the fantastic Moonstone powers. She could even summon and dismiss a variant of the Moonstone body armour to replace her clothes.

(As mentioned in the next section, it is possible that the Moonstone powers gradually went online over several weeks, as her body adapted.)

Sofen is an attractive, slim Californian blonde with beautiful blue eyes, flowing hair, a charming smile and significant (and judiciously emphasised) feminine assets. When not in costume she’s usually dressed like a high-end professional.

During the 1970s she often wears a pastel headband on top of her head. While operating in her civvies in sunny California, she also wears designer sunglasses.

Officially Sofen is 5’11”. But during this era she’s drawn with a generic, average female height. As often we’ve eyeballed a likely height and weight based on the art. The simplest No-Prize Hypothesis is that acquiring the moonstone made her taller over the next few weeks as her body adapted to its new might.

Dr. Sofen defines herself by her intelligence. And she is defined by a bitter, vengeful desire for social revenge and showing the world who’s the boss and who’s the bitch.

She’s a user and a predator, desiring to be as independent and high-status as possible, through both money and influence.

Sofen is proud of having neither morals nor ethics. She sees those as yet another set of constraints that only applies to suckers with a less prodigious IQ than her own. She regrets nothing and stops at nothing. Her only goal is to make it big.

She’s greedy, and very open about it. But she is also smart and disciplined enough than it doesn’t constitute an Irrational Attraction in game terms.

Connections:
Dr. Faustus (Low, until he seemingly falls to his death).

As usual, this isn’t compatible with the official stats for stock and supporting cast NPCs, which are damn high. 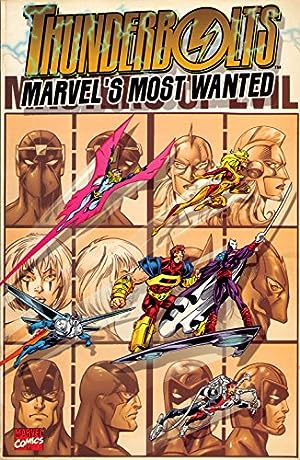 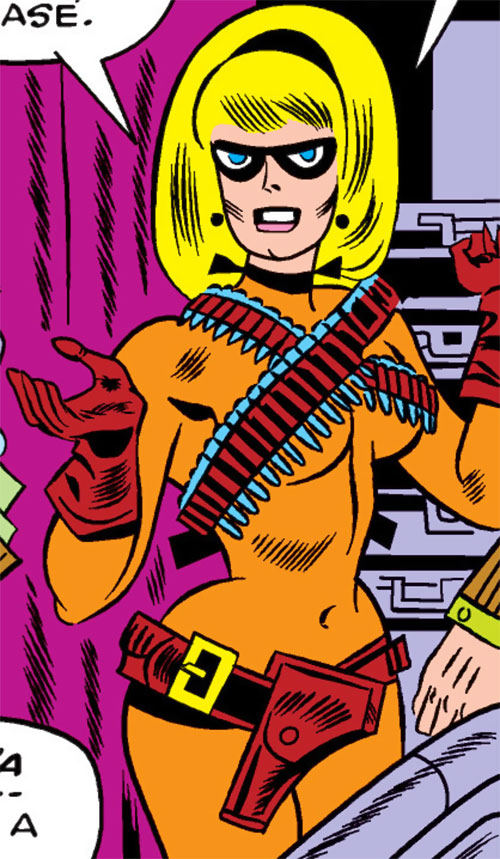