Lost continent of Mu, the motherland of man

Mu is one of the best-known representatives of the rich body of fictional lost continents, the most famous being Plato’s Atlantis.

Though that was not the origin of the tale, much of what is known about Mu comes from Churchward’s work in the 1920s and 1930s.

The core of the story is the usual. A highly advanced race of ancient men (with pale skin, of course) is behind many of the world’s cool things (such as the more elaborate aspects of the cultures of peoples with a darker skin). Then it disappears in a catastrophe.

Unlike other sunken continents such as Lemuria and Atlantis, Mu has not appeared much in the Marvel Universe. The version with Karlak is probably the first such appearance. This might be because of a certain confusion between Mu and Lemuria, another lost continent. ”Mu” has even been given as the pre-Cataclysm name of Lemuria.

In the grand tradition of “everything at once is true even if that sounds contradictory” in super-heroes universe, there’s no reason not to have all depicted Mus and Lemurias and Atlantises and whatnot exist in your campaign. Oceans are really big places.

You can also check the character profile for the Shining Knight (Ystina) for Grant Morrisson’s intriguing ideas about the cyclical nature of myth in super-heroes worlds.

Muvians speak either English or Atlantean, since they could fully communicate with Namor and Namora. Atlantean might be easier on suspension of disbelief. One sentence by Namor does imply that this Mu was once a part of his Atlantis (perhaps a rogue colony from before the Great Cataclysm ?).

Karlak is a technologist operating well beyond his local tech level, and a bit beyond 1940s Earth tech levels. He produced few inventions, though. Perhaps it was difficult for him to procure the materials needed to make his ideas a reality.

Karlak was limited to his own technology. He had no idea of how surface technology worked or what it could do, and assumed that it couldn’t possibly rival his own small-scale gadgets.

Karlak hails from the sunken city of Mu. Mu — or rather, this Mu — was a warlike, advanced island civilisation. It nearly ceased to exist ten millennia ago.

That the island would sink under the Pacific had been foreseen, and a few boats left the island before it was too late. Nonetheless, the majority of Muvians considered this prophecy to be garbage, and stayed. Terrible earthquakes and tidal waves then swallowed the island.

(Historically, this Mu would have been a contemporary of historical Jericho, which had several thousands inhabitants. The existence of a small city-state ten thousand years ago is thus not much of a stretch.)

However, the inhabitants somehow erected a transparent dome that protected part of the city. That left at least a dozen large buildings standing. The nature of this shield, and how it was so swiftly fashioned, is unrevealed. But it was still intact during the late 1940s.

Mu entered a state of cultural and technological near-stasis, presumably due to its limited population and resources. The locals assumed that there had been a global flood and that they were all that remained of humanity.

In the late 1940s, a momentous event happened. A ship sunk close enough to Mu for the locals to notice it, proving that there were other men on Earth. The High Priest of that time, Karlak, worked the populace to convince them that it was a call to arms for the conquest-prone Muvians. 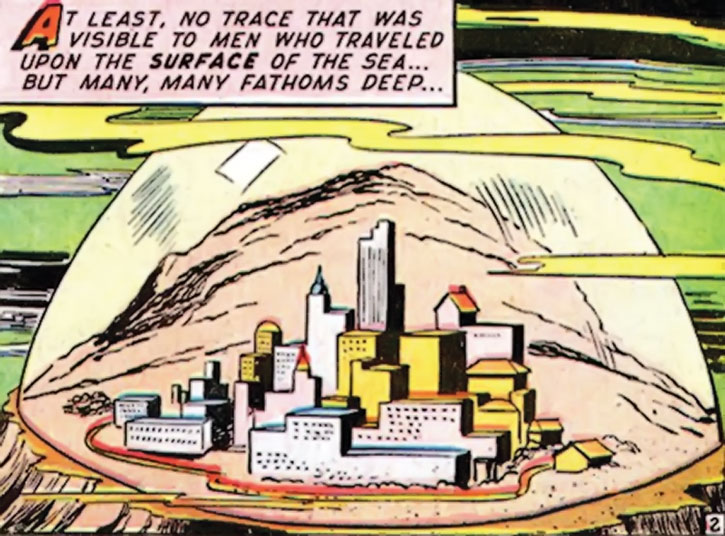 He succeeded, and soon Mu had a submarine. It was presumably a long-standing project designed by Karlak for which he could finally get resources in the name of military adventurism.

During early exploration near Hawaii, the Muvians encountered Namor and Namora having a swim. They tried to capture them. Surprised by the great strength of the duo, the Muvians had to retreat.

Undeterred, Karlak observed that their opponents were unarmed, and assumed that surface civilisations must be very primitive. He announced that the swords and seaweed bows of the Muvians would give them a great edge against such savages. Then he prepared an invasion.

They came from under the sea

The swords-and-sandals Muvians ended up attacking Pearl Harbour, wounding an American sailor with an arrow. Namora and Namor attacked to prevent a massacre, but were outnumbered. The invaders knocked the duo out and resumed their march, forcing USMC troops to open fire.

Shocked by the effects of a machinegun, the Muvians fled to their ship. But Namor and Namora recovered quickly enough to follow them all the way back and discover the sunken city.

Karlak returned to the ruling council to advocate for further military efforts. But the council opposed this in light of the casualties suffered during the raid. Karlak tried to force the issue by producing a prototype electric handgun from his robes, and Namor tackled him. During the struggle, Karlak accidentally shot himself and was apparently killed.

This Mu was, as far as I know, never seen again – though Namor mentioned the possibility of establishing friendly relations with Atlantis. It does not figure on any official Marvel map.

Karlak is a power-hungry warmonger.

“The upper world is inhabited by men ! The time has come for us to realise our destiny ! We must go forth, and conquer again !”

Drawbacks:
Misc.: Karlak knows next to nothing about the surface world.

Karlak’s troops are all bald, White males sporting skirts and sandals. They have roughly the same stats as a generic militiaman, and wield EV 04 swords and bows with a Weaponry Skill of 03.

Karlak sometimes equips them with diving suits and special gear as noted above. All of this early special gear was intended for underwater combat, though his experience at Pearl Harbour would likely have driven him to invent surface combat weaponry.

Karlak commanded about 20 men (the sunken city of Mu is a small place), though he hoped to raise more for a second raid. These guys have decent morale and training, but no combat experience. 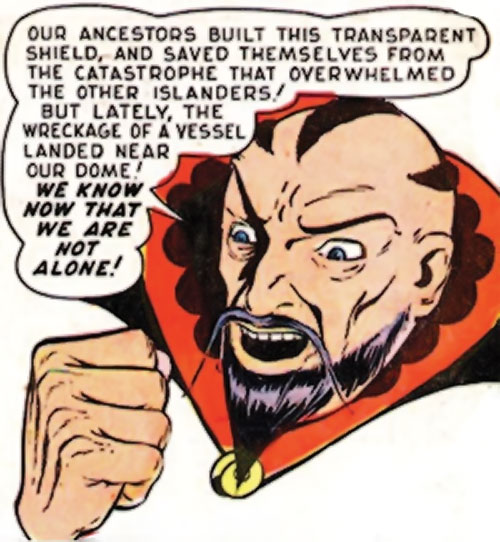 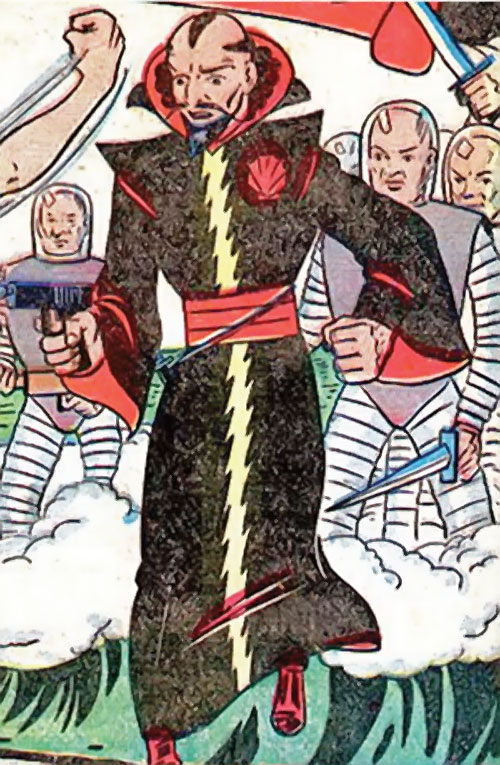