Shan is a mutant with the ability to possess the mind of other people. During the first instants of possession, she is somewhat clumsy with the foreign body. The longer she possesses someone, the deeper she gets into her victim.

She has limited access to her victim’s memory. If she possess someone for too long, she may start to get influenced by her victim’s personality.

If her victim is injured, she experiences an equivalent mental feedback. Ordering a victim to commit suicide may provoke a very violent feedback who might deeply damage her. That’s why she would never do such thing, though she threatened enemies several times to do so.

Extraordinarily strong minds may get free of her control. When it happens she receives a powerful feedback that may knock her unconscious.

She has latent telepathic abilities, but these will be developed years after this profile ends.

Her past history is one of tragedy and suffering: Vietnamese boat-people and immigrant in the US, witness to her parents’ rape and murder, raped at 13, perverted criminal uncle, evil twin brother she had to “kill”, in charge of her two young siblings… As a result, she developed a resilient personality.

As the eldest New Mutant, Magneto made her his personal assistant while he was head-mastering Xavier’s school.

(See the New Mutants team’s profiles for further details of her adventures with them).

The Việt Nam War is a time-line landmark that fits the creation of The New Mutants in the early 1980s. For a modern adaptation of the character, another conflict, real or fictional, should be used.

Her dual French-Vietnamese language comes from the Vietnamese colonial past. It should be adapted as well (could be French-Arab in a Middle-Eastern or Mediterranean country or English-Arab in an East-African country or Russian-Something in a former Asian soviet republic…)

War Refugee in the USA

Xi’an lived in Việt Nam during the war. Her father was a colonel in the South Vietnamese Army. She had a twin brother (who shared her powers), a younger brother and a younger sister.

Her uncle was a general, also in the ARVN . When fleeing the defeat from the Việt Cong, he took her siblings with him. He used her twin brother’s powers to become a criminal lord on the US West Coast.

Xi’an and her parents were left behind. She very reluctantly used her powers to save them from prison and execution.

They managed to get on a boat. However, the Thai crew of the boat were merely pirates. They massacred the refugees after taking their valuables and raping the women. Xi’an was just old enough to raise their appetite. As she herself says, she was less lucky than her mother because she survived this ordeal.

The US Navy rescued the ship from the pirates. Thus, they came to the USA as war refugees.

She found that her uncle and her twin were perverted criminals. The first thing she did on US soil was to try to get her young siblings from their clutches.

In New York, seeing how the Daily Buggle’s front page presented Spider-Man (Peter Parker) as a criminal, she thought she had the opportunity she was looking for. Against an outlaw, she was less reluctant to use her power to possess him.

She used Spider-Man’s body to get to her uncle and brother. The Fantastic Four, though smelling something fishy about the former general, defended him. Later, when Xi’an was given a chance to explain, the FF and Spider-Man allied with her to free her siblings.

In the final confrontation with her twin, she possessed him so deeply that she completely absorbed him. Though it should have been a major trauma (like Rogue experienced after absorbing Carol Danvers), it’s hardly ever mentioned in her later life.

Reed Richards recommended her to Professor Xavier. She was the first member of the New Mutants, which Prof. X reluctantly assembled (under the influence of a brood queen’s embryo). She became Karma. 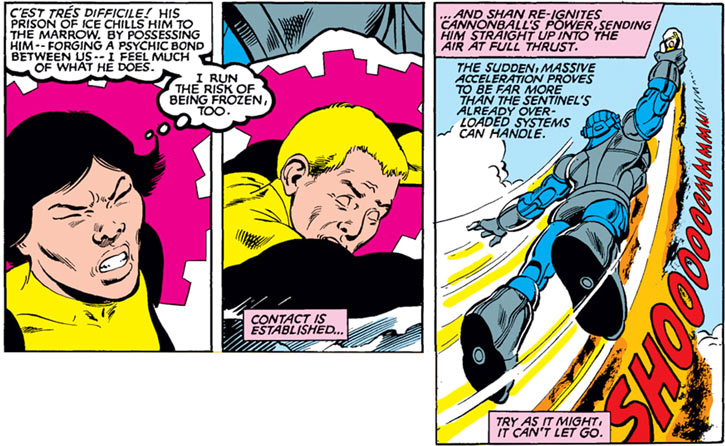 She had several adventures with them. At some point, she very reluctantly made a deal with her criminal uncle: to work for him in exchange of Viper’s hideout location. The assault on Viper’s hideout turned sour and Karma went MIA. Every other team members thought her dead.

She reappeared several months later, obese and unable to stand. She was surrounded by a throng of possessed people she treated as slaves and human shields. She was, in turn, under the control of The Shadow King. Helped by a depowered Storm, the New Mutants defeated the Shadow King.

However, Xi’an was still morbidly obese and very ashamed of it.

The New Mutants were then all transported to Asgard by the Enchantress. There, Magik’s teleportation malfunctioned. Karma was projected in the middle of a desert where she had to survive. 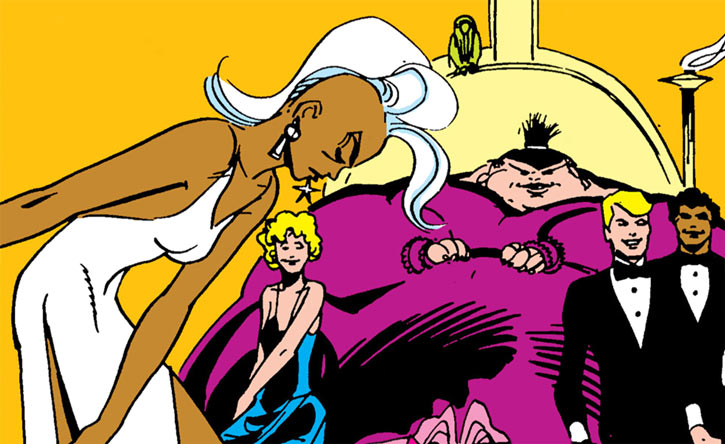 She got help by the Norns, Norse deities of Fate , in the form of a little girl. When the kid appeared, chased by a giant lizard, it gave Xi’an the will to struggle. She discovered she could control animals. As it was their only means to get food, the experience allowed her to recover her usual weight.

Once they got back to Asgardian civilization, the little girl disappeared. Xi’an was left with a small string on her finger: a sign of blessing from the Norns.

During the Secret Wars II, the Beyonder killed then resurrected the New Mutants. The trauma affected Xi’an just like her teammates. When Magneto sent them to the Massachusetts Academy, she went along.

During the Mutants Massacre, her apartment in New York, where her younger siblings lived, was bombed. Magik’s stepping disc barely saved them. After returning from the chase between Magus and Warlock, she started a search for her missing siblings.

Magneto told her he would use the Hellfire Club’s resources to that end, but she didn’t believe him. While attending a party thrown at the Hellfire Club, she possessed Tessa to access their databases. She had no result and got caught by Sebastian Shaw and Magneto. 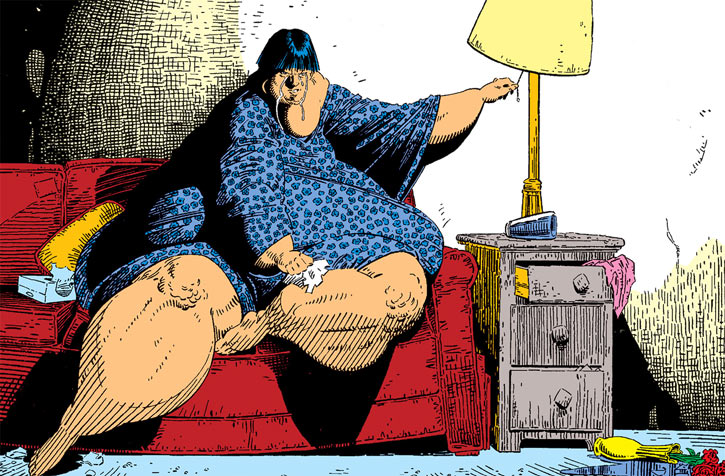 Everybody kindly explained to her that this had already been attempted. After receiving Magneto’s promise to do everything in his power to recover her siblings, she promised to behave.

This promise made her refuse to go with the rest of the team to get Bird-Boy. Indeed, she walked out on them, leaving a note behind her to explain she went in search of her brother and sister.

The next time we met Karma, she was working with her uncle in Madripoor. General Coy has established himself as a crime-lord in the city-state. Again, Xi’an made a deal to work for him in exchange of information about her siblings’ whereabouts.

She allied with Wolverine to spoil several plots of her uncle to conquer Tyger Tiger’s criminal territory over Madripoor.

She has sharp Asian face features: sharp prominent cheek-bones, epicanthic fold, black straight hair, yellow skin. She’s not particularly pretty. The first artists were not very nice in drawing her in the first years of the comic.

She’s a survivor. She has lived through numerous personal drama. Her rape is her most traumatic experience. She’s very ashamed of this part of her history. It affects her general behavior: she tends to keep everything emotional to herself.

As the eldest New Mutant, she was first appointed field leader. However, she lacks the tactical easiness of Mirage or the passion of Cannonball.

She’s not a team player. She bailed out when she started to have hard times dealing with her siblings missing, she went alone to investigate Hellfire Club’s basement… Some may say it was to protect her teammates. However, as they actually got involved because they cared for her, they ended up in danger anyway.

She has a very high sense of family. Her siblings are her most important thing in the world. She puts everything else in jeopardy to make them safe. This, as Cable later says, makes her unreliable. Indeed, she relies on no one else but herself on these family matters.

She constantly puts some (badly spelled and misplaced) French expressions in her speech.

She’s a lesbian, but it’s not apparent in the time period covered by this profile. It comes much later. However, as a Role-playing Note, it should be mentioned. She won’t make any obvious pass at any female character, but she wouldn’t be attracted to men (in DC Heroes terms, the Attractive Advantage only works on her if it’s coming from female characters).

Karma is one of the first major Marvel character to openly show her homosexuality. However, being still under the Comics Authority Code, the editors had to dampen it to the max.

We officially learn it much later in her history (X-Force #75 in March 1998), where we meet her, hair cropped and dyed pink, dressed in the most daring outfit, hanging with her 2 girlfriends at the “Burning Man” festival. And even later (Uncanny X-Men #508 in June 2009), we see her in bed with another woman.

In the 2000s, things were getting less tight-up in the comics industry. Her homosexuality was much obvious. She kissed Shadowcat, misunderstanding her close friendship with physical attraction.

And we have lines such as: “I’m a lesbian immigrant raising my own brother and sister. That you think I’m normal tells me all I have to know. You’ll fit in perfectly at Xavier’s Institute.”

“Since I’m cursed with this talent, I must learn to control it… lest it someday controls me.”

“If we wait for Team America or The X-Men, we will be too late. We are Dani’s best hope, mes amis, and we will save her… with or without Professor Xavier’s aid.”

Karma: “Look down uncle. It is a 250m sheer drop to California Street.”
General N’Guyen (standing at the edge of the building’s roof): “Blessed Saints !”
Karma: “They cannot save you… but I can destroy you. A single thought. A single step… is all that is required to rid the world of a piece of human vermin… Talk uncle, or die. ”

“Was it so long ago, m’sieu, that these same lords cardinal you tell us are our allies and friends were instead our deadly foes… sworn to our destruction?!… Yes, I could have asked… but I would not have believed the answers !”

“I have other more important priorities. I will not betray you to Magneto… but I cannot accompany you. My heart would not be in it. I confess, my heart has not been with the team since my brother and sister were kidnapped.”

Drawbacks:
Dependant (brother and sister), Mistrust (Mutant), MPI (the personality of a controlled character takes over hers), Unluck.

Karma once used her Control power to put guards to sleep. As she did only once (NM vol 1 #6, against her uncle’s bodyguards), she hasn’t the Sleep power.

In her first appearances (until early issues of The New Mutants), she’s struggling when using her powers while weakened. It’s simpler to take a power down approach: 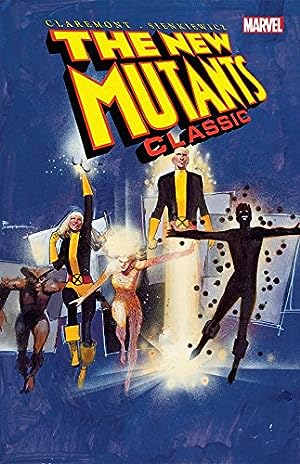 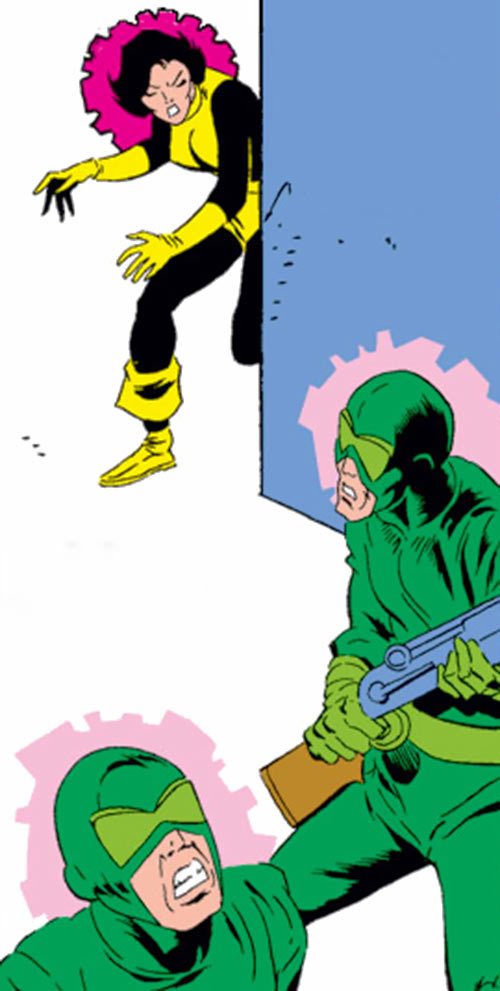 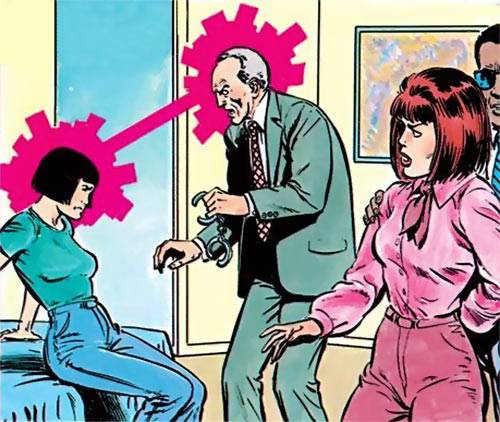 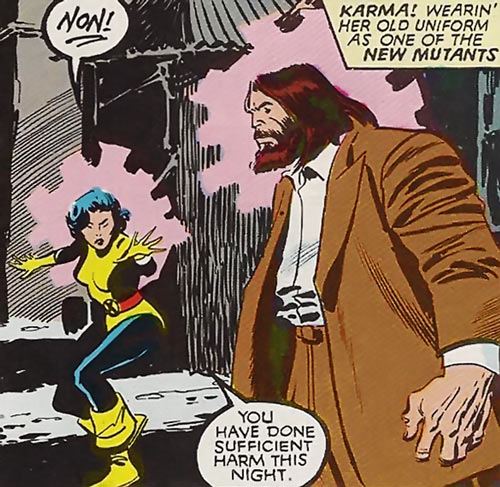 In the Asgardian desert with the Norn child : 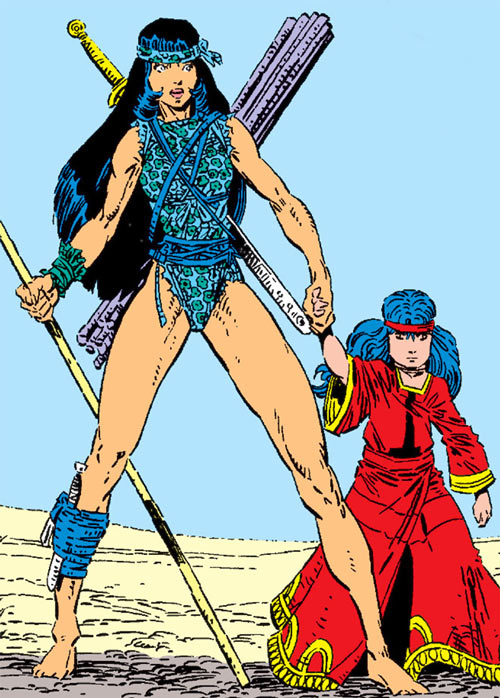 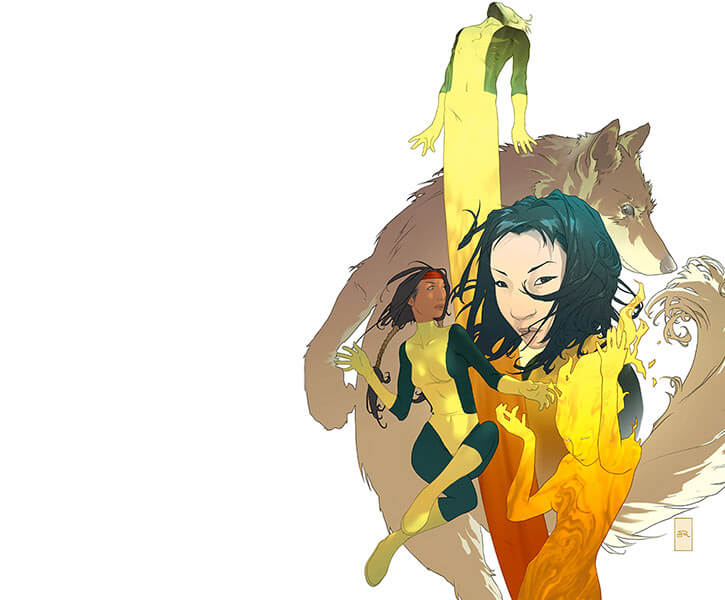