Batman & the Outsiders was launched by DC Comics in 1983.

This new team was edgier, more diverse, less paragon-like than DC’s Silver AgeSuper-hero comics from the late 1950s to the early 1970s heroes. In short, it was more like Marvel  .

This followed on the recent success with the New Teen Titans, a landmark series based on the same general idea.

In this framework, I suppose that Katana was the Outsiders’ Wolverine.

Though she’s a C-lister, Katana has her own brand of stony-faced appeal. She continues to feature in DC Comics team books to this day.

The recommended reading order is a series of shorter articles : 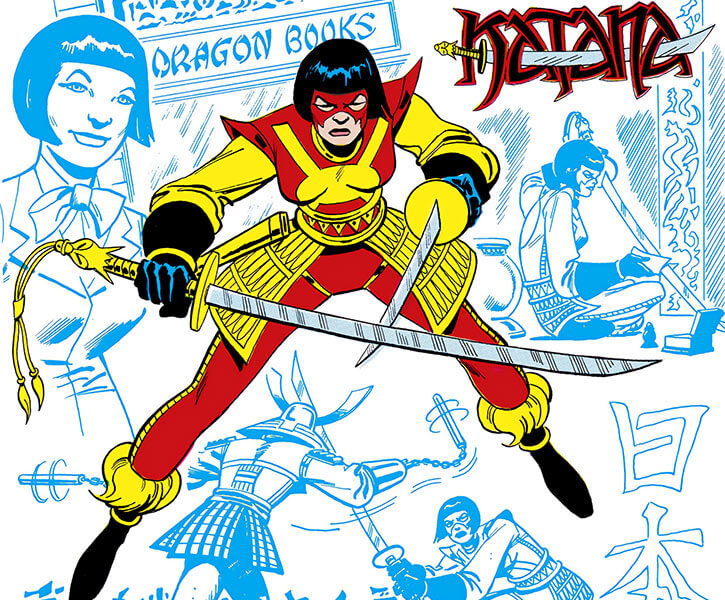 Katana is in terrific shape, and extraordinarily strong despite her diminutive size.

Her reflexes, endurance and agility may qualify as peak human.

She displays an exceptional level of self-discipline, and a high level of intelligence.

Way of the warrior

Some examples of her techniques : 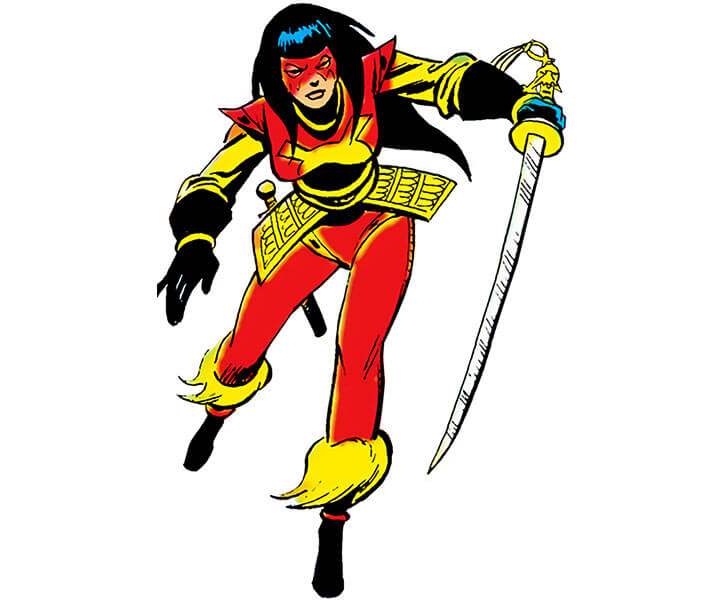 Mrs. Yamashiro achieved her fantastic mastery of the fighting arts within an impossibly short time.

There’s also an implication that she continued to practice jujitsu (and presumably kendo) after her pregnancy. As a young mother, we see her deliver a solid yoko geri .

Mrs. Yamashiro speaks flawless English. She can also adopt a generic American accent if needed, though her Japanese accent is discreet in any case.

She taught herself to become an expert in Japanese bibliophily. Such as knowing about rare books, valuable editions, etc.. It is *possible* that she studied Japanese literature as a youth.

Yamashiro is also knowledgeable about Japanese folklore, such as legends about goblins and demons. She’s also aware that this stuff does exist. How far her knowledge of the supernatural goes is unclear.

She also taught herself a mixture of Asian holistic medical techniques. In typical super-hero comic book fashion, this means using herbs and teas to efficiently heal all sorts of wounds and ailments.

She’s quite sneaky, and a solid acrobat. Though both are easier when you weigh about as much as eight house cats in a trenchcoat. 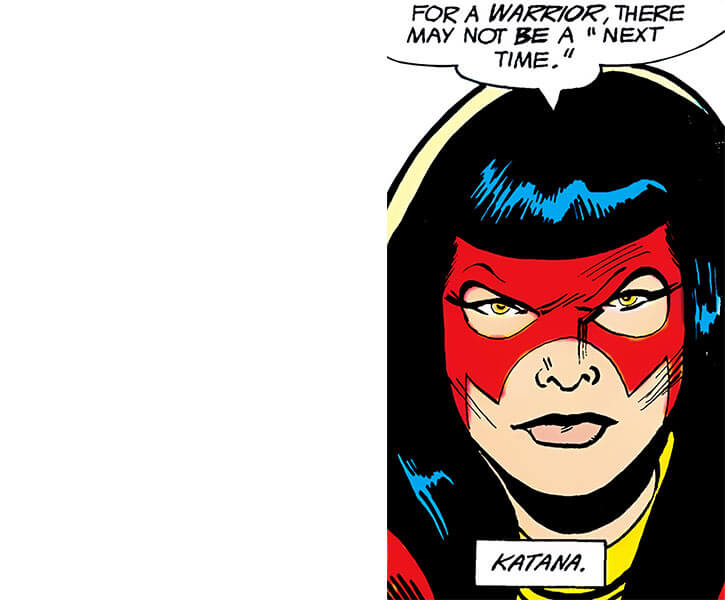 My first reflex is that 1983 is the year of Hamada Mari’s first album.

But I doubt that Yamashiro is a hair metal fan. So let’s go for something more proper and mainstream…

… which means Matsuda Seiko, I guess. It was the 1980s, folks. Back then, a recording of Ms. Matsuda reading the Tashkent phonebook would likely have charted #1 in Japan.

(This section’s title is but one possible Japanese name for “Soultaker”. I copied it from a Japanese article about the Diablo III expansion, “Reaper of souls”.)

The sword also has magical powers. They call it soul taker because it takes souls, Avi. Specifically :

Among the trapped spirits, the soul of Yamashiro Maseo seems to have special prerogatives :

(It seems possible that Soultaker was inspired by Moorcock’s Stormbringer. Elric of Melniboné and his souls-drinking cursed sword still was a towering presence in heroic fantasy literature during the 1980s.)

The person bodily manifests, including clothing and equipment. They can also be magically coerced into obeying Soultaker’s wielder.

One assumes that there are many more souls in the blade. And that they correspond to persons who are less, uh, distinctive. Presumably, it’s the ritual that is limited to five souls at a time.

(For what it’s worth, the “Japanese” text of the incantation we see in the comics seems to be gibberish.)

The yellow sun in the back of her costume seems to be a magnetised plate. It somehow safely holds her blade in place, yet allows for faster draws than if it were sheathed.

Katana also carries a wakizashi – a companion short sword for her main blade. It’s a backup weapon if she’s disarmed.

Early on, she threw her sword if it was necessary to attack at range. Though she had surprising range and accuracy with this, it wasn’t ideal. She eventually modified her costume to have a cache of throwing stars.

One of Katana’s bracelets is actually made of two metallic, hollow half-circles. Within is a thin chain that connects the two halves. This can be used as an entangling projectile – essentially a small bola. It was used but once.

The other bracelet is weighted. It can be used as a blunt projectile.

The bracelets and blowgun were used but a few times. 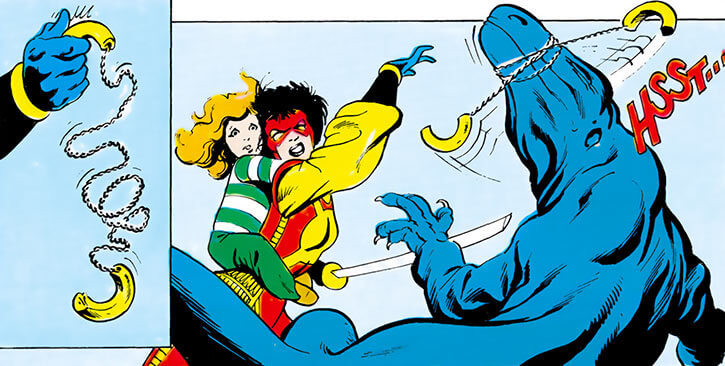 Katana was likely born circa 1950, though it’s hard to tell.

(We are working by publication date. So the idea is that she’s 35-ish when she debuts in 1983. See the “aging in comic books” article for more).

Workforce participation and career length for Japanese women of her generation were both very low. One *possible* scenario is thus that she :

During her childhood she noticed that she had a gift for the martial arts. Little came out of that, though her parents encouraged this interest.

Young Tatsu met the Yamashiro brothers, who were both in love with her. She ended up marrying the elder, Maseo. They soon had twins.

Maseo worked with a computing firm, and rose unusually quickly in the ranks.

But in the meanwhile, Yamashiro Takeo descended into a life of crime… and creepy obsession over his sister-in-law. His power among the underworld rose quickly, as did his wealth.

Yamashiro aligned with the Noguri yakuza family. These also ran the Noguri corporation, presumably active in a number of industries. They were headquartered in Tōkyō. 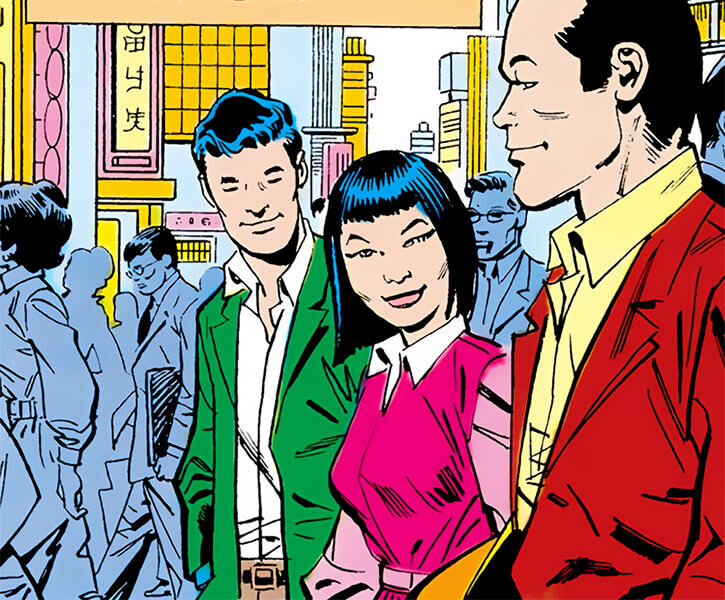 As Katana, Yamashiro claimed the title of samurai. It is thus possible that the Ishizawa and/or the Yamashiro were, historically, nobility.

There are ample precedents of commoners becoming de facto samurai (especially during the Sengoku era  ). But while Yamashiro slices many things, she doesn’t cut corners.

There also are loose implications that both families had a martial tradition.

It could be a “every person in Japan knows the martial arts !” 1980s genre trope. But the 1980s Batman and the Outsiders’ depiction of Japan, while not amazing, was more grounded than that.

Part of Takeo’s money went into expanding his collection of ancient weapons. One of Yamashiro’s main supplies was shady European mercenary and weapons dealer General Karnz.

Yamashiro’s most prized acquisition from Karnz was a pair of identical katana swords, reputedly forged by Muramasa.

But as per the legend, these blades were suffused with anger and evil. This drove Yamashiro further into bloodthirsty bitterness.

(The Muramasa (村正) blades indeed correspond to a robust body of history and legend in Japan. They are considered masterworks of smithing.
That the legendary smith Muramasa Sengo was evil — and thus inevitably made blades that corrupted men — was IIRCIf I remember correctly the first chunk from these tales that became known in the West.)

(Archaeologist Xavier Michel-Levasseur  notes that the “bringer of misfortune” reputation may come from the Tokugawa. Many members of this senior clan were wounded or killed by blades forged by Muramasa Sengo or his predecessors, and thus came to see these as ill omens. This dramatic hook was likely seized and amplified by historical theatre plays.) 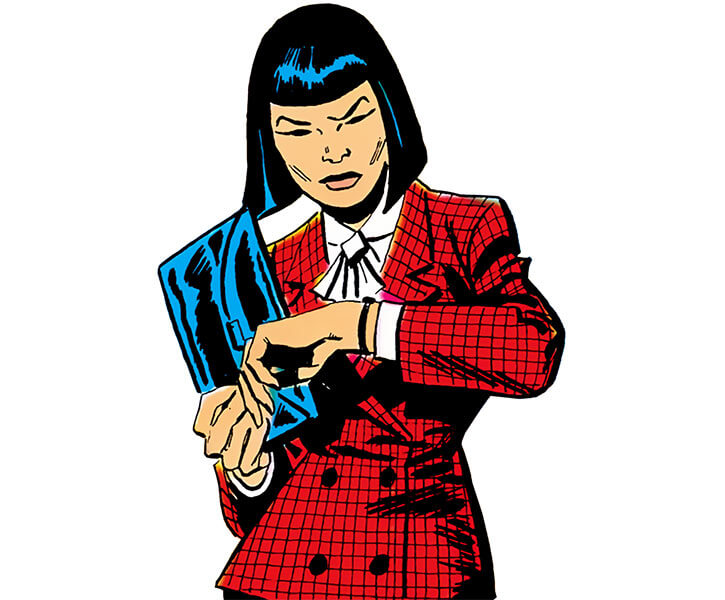 Takeo ended up attacking his brother in his home. He was armed with one of the katana, named Soultaker. Takeo slew Maseo, and their fight started a fire that killed the Yamashiro children.

Unexpectedly, Mrs. Yamashiro disarmed her brother-in-law with a kick, and seized Soultaker.

But Maseo’s spirit from within the blade told her that their children were already dead. And that she had to flee from the fire.

Mrs. Yamashiro simply stated that she “vanished and became Katana”. And that she “honed her skills” for when Takeo would come after her again.

We later learn that she trained with the sinister Tadashi-sensei. Tadashi may have been more interested in Soultaker than in Yamashiro, but he moulded her into a world-class martial artist.

These were, at this point, part of Baron Bedlam’s small army in Markovia.

But she noticed that her actions had imperilled Black Lightning (Jefferson Pierce), who had been negotiating undercover with Karnz.

She thus doubled back to help him, and ended up joining the Outsiders. 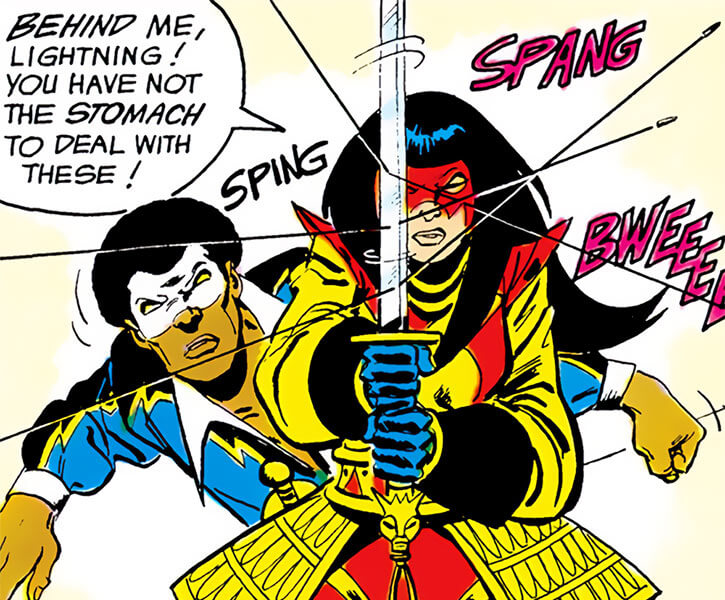 The rest of the biography, the description and personality notes, the game stats, etc. are in the second half of this article.