This is the second third of Dr. Waynebsoro’s profile.

In order to avoid excessive radiation exposure, the procedure is to read these profiles in order. And to avoid wearing purple jeans. The full series goes :

This profile corresponds to just a few issues’ worth of material. I wasn’t originally planning to turn this short span into an entry.

But an experienced S.H.I.E.L.D. specialist is actually a pretty useful character in stories.

Entire campaigns could in fact be run with this sort of character – S.H.I.E.L.D. scientific experts with some field training. Especially if your players are, say, grad students. The Agents of S.H.I.E.L.D. TV series partially used that angle. 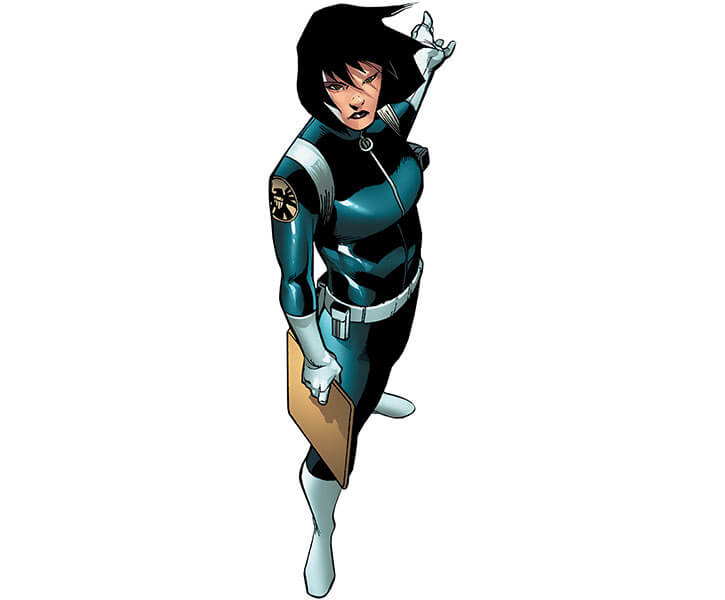 She’s not a in-your-face badass, but she took levels in Getting Things Done. And she’s remarkably determined.

During this era, she demonstrates :

(This section starts right where the previous one ended.)

After 24 years of off-screen adventures, Dr. Waynesboro was seen working with S.H.I.E.L.D. again in 2008. This was after the World War Hulk events  , with S.H.I.E.L.D. stretched thin in dealing with the aftermath.

“Dum Dum” Dugan summoned the reluctant Dr. Waynesboro to the max-security prison in the Negative Zone. He wanted her to track down Hulk’s allies the Warbound. Traitorous Warbound member Miek was held by S.H.I.E.L.D., and Agent Waynesboro interrogated him.

(Kate protests that she’s done with “this sort of work”. But she has clearly worked on many ops since the 1984 Hulk disaster in New York City. This may mean another mission went bad during the 2000s, leading to a return to lab work for a few years.)

(“Dugan” was presumably a Skrull infiltrator. But this changes little here.)

Using intel from Miek, Kate deployed gamma detection equipment to track down the Warbound. She soon found them in a New York City sewer.

Agent Waynesboro declared the Warbound to be under arrest. But Warbound members Korg and No-Name ignored her to go after mutant crocodiles. These stealthy beasts were about to attack Kate and her security man.

Dr. Waynesboro then noticed that Warbound member Elloe Kaifi was badly wounded. She ignored the other Warbounds in order to dress Kaifi’s wounds.

This chaotic situation ended when Dr. Waynesboro and the Warbound were abruptly teleported away.

Waynesboro and the Warbound had been kidnapped by the Leader (Samuel Stern).

The gamma genius was headquartered in Stoneridge, New Mexico. This small town had suffered major damage years before, during a fight between the Hulk and the Avengers.

The Leader’s plan was to tap and use the Old Power, wielded by Warbound member Hiroim. This superhuman ability is possessed by a few members of Hiroims’ Shadow People species. It grants enhanced strength and durability, and an ability to control and connect with the earth.

The Leader tapped Hiroim’s Old Power to generate a dome of gamma radiation. It covered hundreds of square miles, including Stoneridge. The goal was to trigger widespread, but 99.9% fatal, gamma mutations.

The first wave were insects with a short lifespan, which turned into giant monsters.

Dr. Waynesboro allied with the Warbound to save the population.

They also convinced a National Guard unit to side with them. The priority was to evacuate the civilians before they’d get severe radiation poisoning.

Kate helped Hiroim focus the Old Power in innovative ways, to create harmonic fields. They were thus able to create a tunnel through the intense gamma energy of the dome’s boundary. Hundreds could therefore run away from the “gammaworld” zone in time. 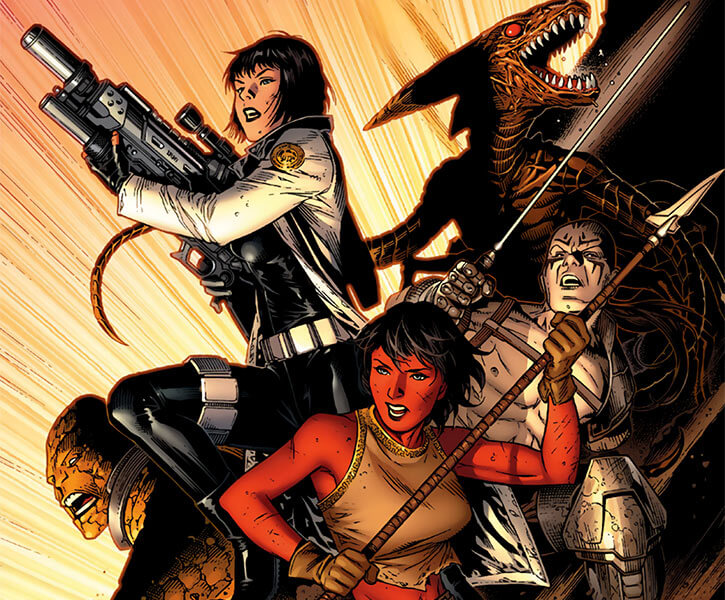 The Leader’s tech had accidentally expanded Hiroim’s Old Power. The Shadow man could now sense several hundreds of additional survivors deeper within the perimeter. Evacuating these in time was unfeasible. To save them required destroying the Leader’s apparatus.

In the heat of the crisis, Hiroim and Kate were impressed by each other’s altruism and courage. A bond formed, and they briefly kissed.

(Dr. Waynesboro wasn’t aware that Hiroim was in a relationship with Korg. But Korg reacted to the kiss with quiet amusement.)

Kate hacked her way into the Leader’s comms network. She played mind games to have him keep the commlink open. This gave her time to hack his teleportation system as well, and transport No-Name and Elloe right into melee range.

Waynesboro further infected the Leader’s weapon with a S.H.I.E.L.D. virus, detonating it.

In the meanwhile, Hiroim sacrificed himself. This seemed to be the only way to deny the Old Power to the Leader in time to save the survivors.

For a time, the Leader turned the tables on Dr. Waynesboro. The gamma manipulation was more sophisticated than she thought possible. And the Old Power was actually needed for those within the dome to stay alive.

He also took control of S.H.I.E.L.D. robots sent in to back Kate up. Then dominated her with his mind control touch. Then absorbed the Old Power into himself.

But Waynesboro and the Warbound still managed to overcome. Kate’s tech allowed her to hack back the S.H.I.E.L.D. death robots, stopping them.

The dying Hiroim continued to function by propping his body up with the Old Power. And though the Leader stole the Old Power for a short while, the Shadow priest vanquished him before finally dying.

In his last moments, Hiroim ensured that the Old Power would remain active – by transferring it to Kate.

During this span Dr. Waynesboro wears her S.H.I.E.L.D. jumpsuit, plus of course a S.H.I.E.L.D. lab coat. Once you get used to having these pockets, it’s hard to work without !

She also goes with a short, rounded, low-maintenance bob. It evokes her 1980s haircut and remains conservative, but it’s more utilitarian.

Some art during that era stylises her feature in a way that looks a bit Eastern Asian. It’s probably just an art thing, but if Kate features in your games/stories you could always decide that part of her family tree is Asian.

However, her core hasn’t changed. She’s still a nice person who loves scientific research, and her drive remains to help people and save lives. And this idealism still comes with a passionate nature, and an open mind.

Dr. Waynesboro still doesn’t run around with a machinegun, stubble and an eyepatch. But she’s much less reluctant to use violence, deception and misdirection to achieve ethically solid goals. Or even — /pearlnecklace — harsh language.

What she still doesn’t want is to do that long-term. But as a stratagem to stop a demented mass murderer such as the Leader, sure.

Still, she’s well aware that her main strength is to *not* resort to violence as a first or second solution. She gets excellent results by talking, listening and exploring. She’s also good at spotting non-violent approaches, such as clues that a creature isn’t unconditionally hostile.

Kate seems to have taken the Hippocratic Oath  . Perhaps as part of formally completing her M.D. degree.

She takes it very seriously. Kate acts as a frontline medic for anything that’s wounded, even on the messiest battlefield.

Waynesboro: “I’m done with this kind of work, Dugan.”
Dum-Dum Dugan: “Yes, well… country calls and all that.”
Waynesboro: “…”
Dugan: “I knew I could count on you.”

Kate: “And now if you’ll excuse me, I don’t much like my prisoners dying on me.”
Elloe (being bandaged by Waynesboro): “We’re not your prisoners.”
Kate: “Whatever.”

“People won’t start keeling over for 16, 17 hours. But in a half hour to 45 minutes, the long-term genetic damage’ll be irreversible.”

(The Leader’s cannon explodes) “S.H.I.E.L.D. virus, uploaded through the com link.” (No-Name and Elloe immediately teleport in and engage) “Angry aliens, uploaded up your ass.” 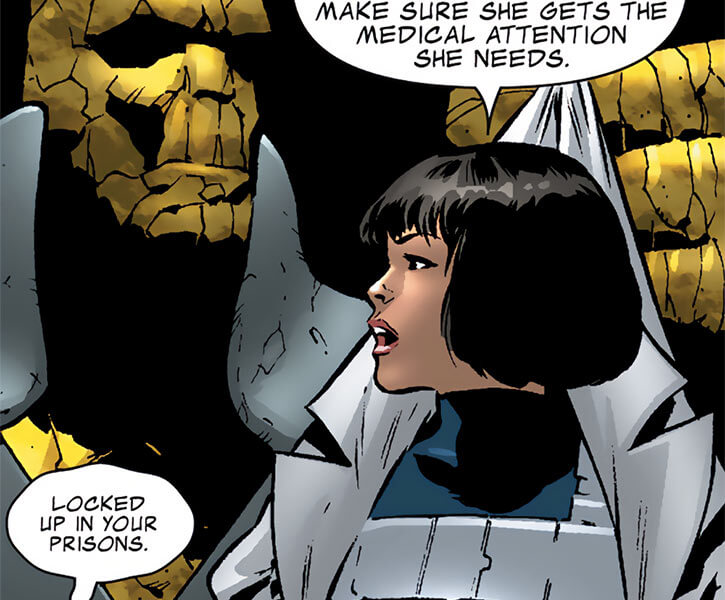