This is the final third of Dr. Waynesboro’s profile.

Dr. Waynesboro is imbued with the Old Power of the Shadow People of Sarkaar. 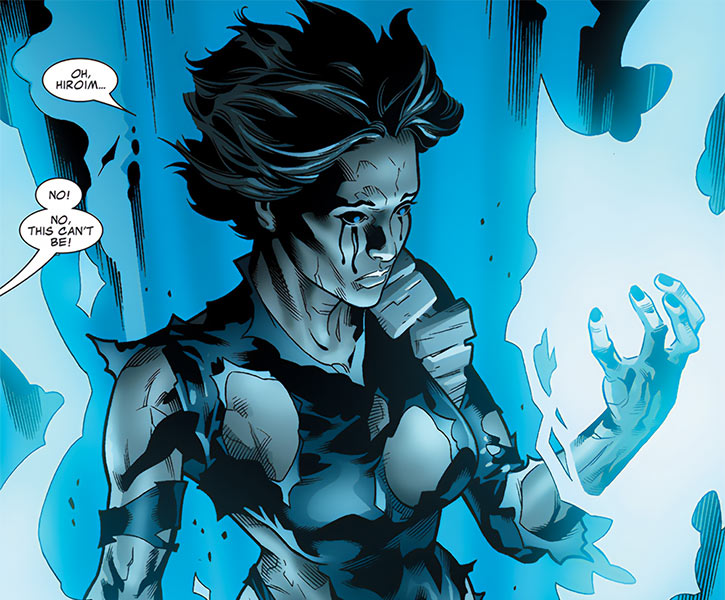 (This section starts right where the previous one ended.)

By the time Hiroim the Oldstrong was destroyed, the Leader was battered, out of juice, and with few weapons left.

Using the Old Power, Kate smashed the Leader’s last robots and forced him to flee.

Though the Leader had killed hundreds, Kate and the Warbound had managed to :

(It is difficult to get a sense of how many people were in Stoneridge, and what the casualties numbers were. The dialogue keeps switching between hundreds and thousands. This may be because some counts are about Stoneridge proper, and some are about the entire area.)

The Warbound remained at Gammaworld, in the freshly-erected Hiroim Memorial Research Center. They did security work for the survivors.

Meanwhile Kate maintained the Old Power, and did research into curing the abnormal gamma conditions.

(Kate and the Warbound are the only staff seen at the Center. This is presumably due to the radiation hazard.)

However, S.H.I.E.L.D. abruptly became H.A.M.M.E.R.. Norman Osborn had taken over the American security apparat. While he gleefully pardoned the Warbound, he clearly was up to no good.

Furthermore, with no one to train her and being on the wrong planet, Kate had difficulties controlling the Old Power. 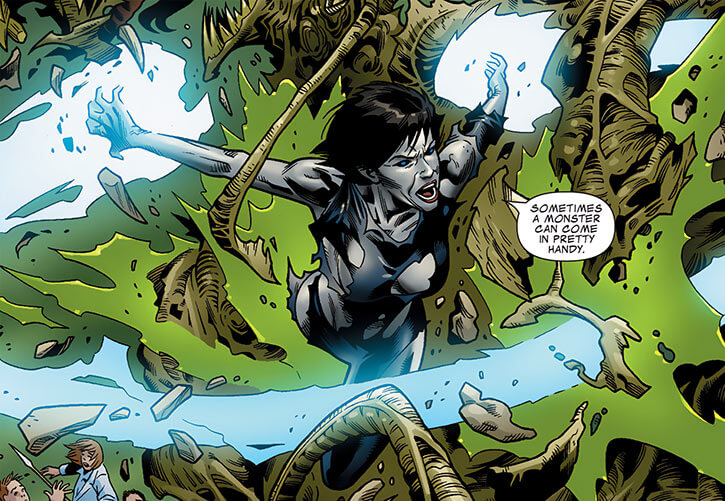 On the other hand, she sensed the arrival on Earth of Skaar, who also held the Old Power. So did his relatives, such as his father Bruce Banner or his cousin Jennifer Walters.

But with the Power, Dr. Waynesboro and the Warbound found him first.

The tenuous mental link also informed them that Sakaar — Hiroim and Elloe’s homeworld — had been destroyed by Galactus.

Though the Warbound wanted to welcome and help Skaar son of Hulk :

Say, the Black Eyed Peas. I remember listening to The E.N.D. a lot whilst churning out writeups in cafés. Good chronological marker.

The Warbound couldn’t reason with either the Hulk or his son. Their duel also damaged a nearby nuclear plant. Dr. Waynesboro lacked the power to halt the meltdown.

However, Skaar ended up using his far greater command of the Old Power to sink the core to a safe depth. To assert dominance.

A technology was developed to drain the Old Power from her, and feed special H.A.M.M.E.R. bases. These could use the power drained from Kate to shield themselves against Skaar and other Oldstrong aliens.

However, Banner had allied with his son. The pair raided the H.A.M.M.E.R. base where Dr. Waynesboro was being held and tortured.

From there, Banner overrode the H.A.M.M.E.R. sensors at Gammaworld. This allowed Kate to resume protecting the area and working on a cure.

As they again spent time together, Kate got over her bitterness about her past with Bruce. She even rekindled some romantic interest in him. But she soon came to realise that his heart still belonged to Betty Ross.

After H.A.M.M.E.R. collapsed, S.H.I.E.L.D. reinstated Dr. Waynesboro as the Research Director of the Gammaworld base/lab. The Warbound continued to work with her there. 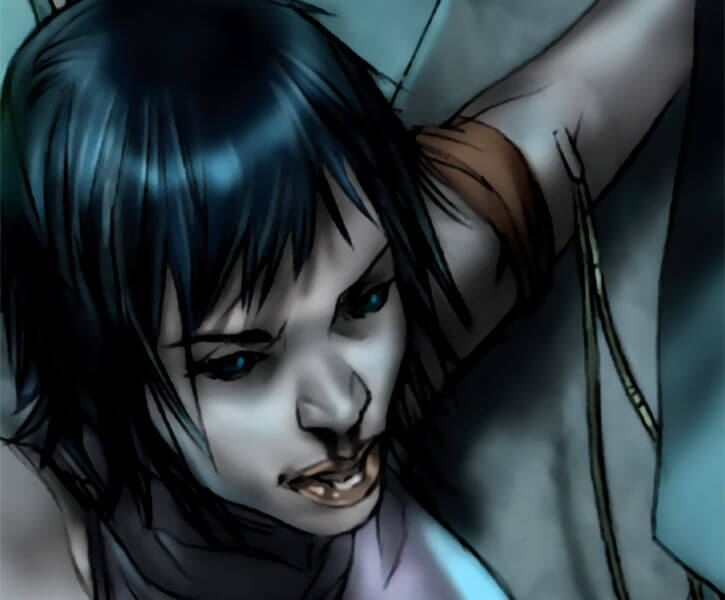 In 2011, the Hulk was very nearly killed by Zeus. His allies rushed him to Kate’s lab. Their (correct) reasoning was that she was one of the few capable of providing critical care for a hulk.

The Hulk then left with the Warbound and Skaar to confront Miek in the Savage Land.

Dr. Waynesboro also treated A-Bomb (Rick Jones), who had been badly wounded during the Chaos War.

Dr. Waynesboro was a minor character in 2018/2019 issues of Spider-Man – Deadpool. She looked fully human, was a technician or engineer rather than a biophysicist, and was markedly out of character.

One caption acknowledges that it makes no sense. But no explanation is provided in the 20-ish oh-so-zany comics issues I just went through.

She worked with Deadpool’s motley crew (a Clay Quartermain LMDLife-Model Decoy. A lifelike robot double., Screwball, Hellcow, Branch, Manphibian, the Murder Sharks) to secure weapons from the recently-disbanded S.H.I.E.L.D.’s depots and sell them.

Hellcow betrayed them, and also Branch died. The crew went to work for Mockingbird to avoid prison.

The simplest hypothesis is that this entire crew were LMDs. Except for Branch and the sharks. One of the main story arcs during that run was about advanced LMDs, and caches of old LMDs are definitely a S.H.I.E.L.D. thing. 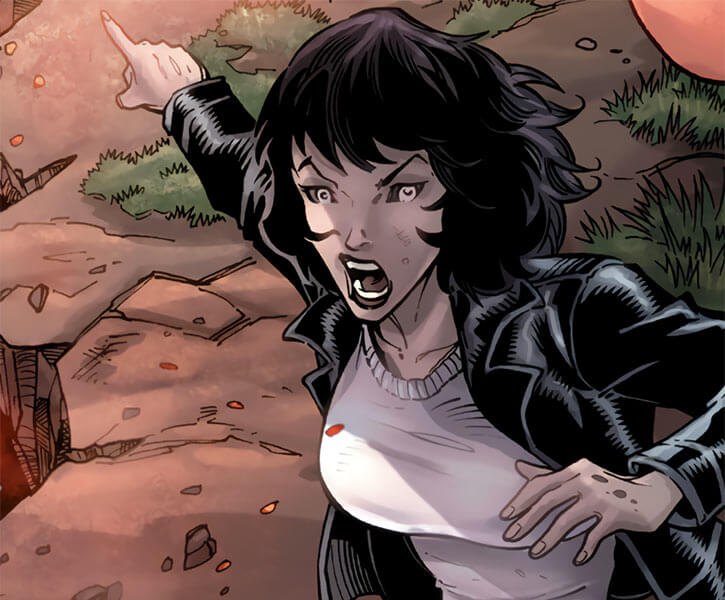 Her tears are now a thick, dark blue liquid.

These are the same alterations as with Hiroim, and Caiera before him.

Early on she seems *possibly* a bit taller. But in later appearances this isn’t the case. Howbeit, I also got the impression that she was stronger for a short time after receiving the Old Power. So maybe she *was* larger and stronger before it stabilised.

Still a serious, experienced, responsible physician and scientist. As well as an idealist and an altruist, contrasting with the Red She-Hulk (Betty Ross)’s bitter cynicism and emotional distress.

We don’t see much of Dr. Waynesboro during this era, though.

Kate still wears a beta cloth jumpsuit from time to time, but it has no in-game benefits.

Her lab has some highly specific medical equipment to treat gamma mutates. For instance, her defibrillator pads can deliver at least 2.5 gigajoules. Don’t try this at home ! 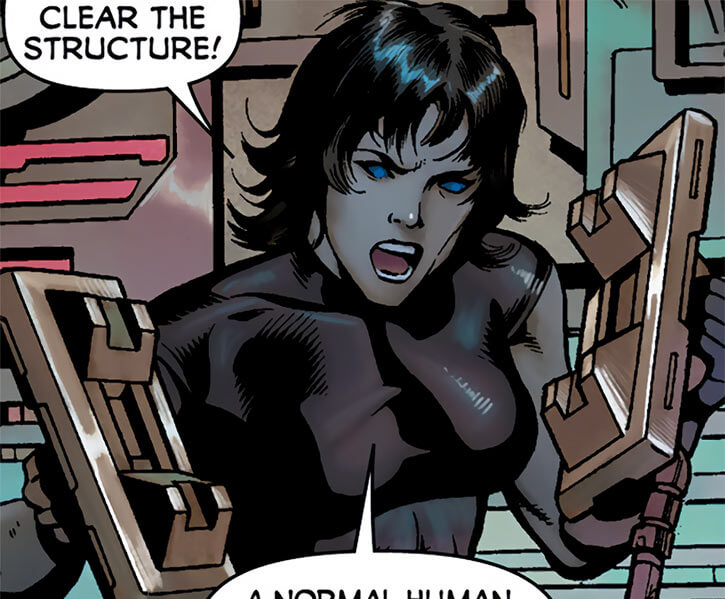 I haven’t modelled here Kate’s ability to sense Skaar’s mind and some of his thoughts. That would be a lot of verbiage for what was a minor plot expediter, and it might be better to treat it as something on Skaar’s character sheet anyway.

But there are other Old Power wielders in the universe. If that ever comes up, Dr. Waynesboro might need additional abilities on her sheet.

Her S.H.I.E.L.D. budget likely amounts to a Financial Backer, but there isn’t enough data.