Kathryn’s Gun Enhancements are a series of cybernetic implants which provide the Seven Guns with:

These enhancements are activated by her saying her keyword, “Miyamoto”.

Kathryn’s Enhancements link her to her bike. It changes along with her costume when she activates her enhancements. The bike has a machine gun built into it.

Kathryn is also an Olympic markswoman and athlete, and a historian. She’s exhibited knowledge of American history, but its unclear how specialized her studies are in this area. 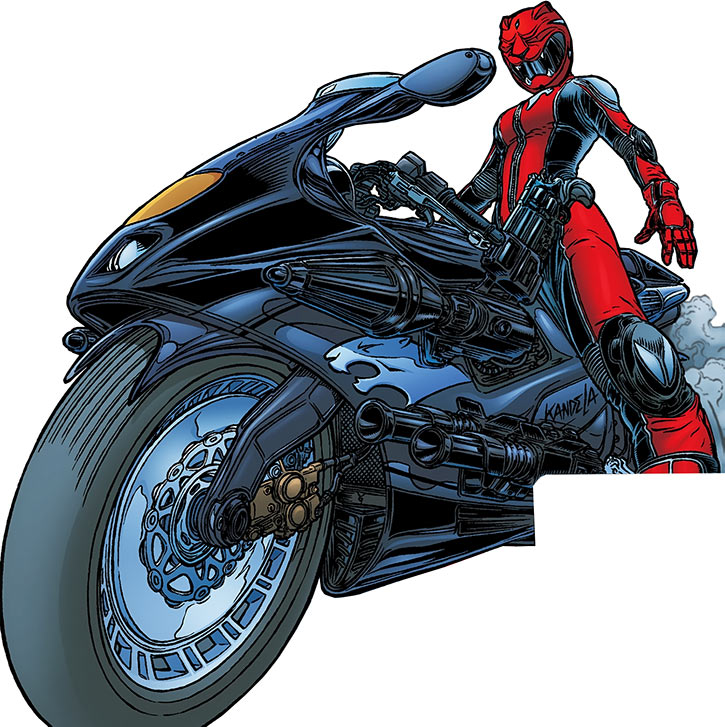 Kathryn Artemis and bike with enhancements activated. Click for a larger version.

Kathryn was a resident of a western US city ruled by a corrupt police force and private armies. She was approached by friend Tom Watson who, with John (Horus) and Frank Blacksmith. These had developed the cybernetic technology which merged with other scientific disciplines to allow the creation of Gun Enhancements, gifting the recipient with cybernetic super-powers. Joining them, she was enhanced, adopting her codename and joined the Seven Guns.

The group continued operating until Laura Torch was killed in an explosion which maimed Tom Noir. They began to drift apart following this. But apart from Tom, who retired, all kept operating. John Horus was the most public, and most independent. He became the most publicly trusted of the guns, and had regular access to the President.

They enjoyed a freedom to operate for a while. Then John decided that the President was guilty of a number of crimes, including starting an illegal war. John summarily executed the President and his inner circle. He then stood before the White House press corps declaring that the country should hold fresh elections.

Tom reunited with the other Guns, apart from John, who’d distanced himself from them during his speech. But they were unable to come to an agreement on how to respond, made harder since Kathryn had opened fire on the Army. 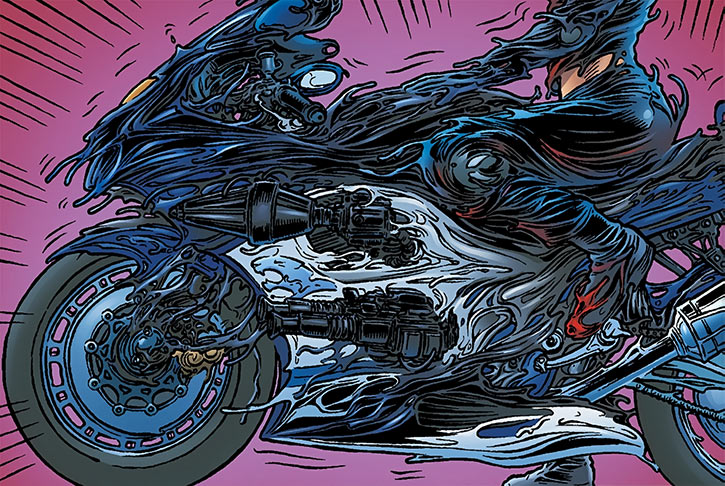 Heading to an ammo dump to re-supply, they were ambushed by a group of Frank’s Guns. Dominic was killed in the fight, but the others managed to kill their attackers.

Learning that John was battling another group of Frank’s guns in their city, they gave him brief support to allow him a breather. But they then warned both him and the military to stay out of their city after they were finished. They then let the battle continue, while they went about saving lives of those affected by the fight.

Hard-nosed and driven, Kathryn has a controlled anger and little patience for corruption or illegal government thugs.

She’s extremely loyal to her team mates, and was the last to accept turning away from John after his crimes.

She had little compunction firing on soldiers when they confronted her. This is probably at least in part due to her history of fighting illegal paramilitaries and corrupt cops in her home town. And by her belief that they were acting illegally.

“If this was a country that cared whether or not its authorities were criminals, we never would have been on the streets in the first place.”

“Tom, Laura, John, Angela… they’ve got this whole social conscience thing going on, and that’s great. I can go along with it. This place is a shithole and it’s not going to get any better until someone stands up and says ‘NO’, right? When non-governmental organisations like private security firms are being put on the streets of my town — where’s Congress ? Nowhere to be fucking seen. Companies like Blackwater routinely put Chileans and Bosnians on the streets, armed, to enforce not laws enumerated by elected representatives, but the terms of no-bid contracts handed them by a government that’s given up on ruling. It is necessary to a free state that I take up arms, suppress what is practically a coup d’État and repel an invasion. I want the rule of law back. I want my constitutional right. Give me a gun and I’ll make the bastards execute the laws of the union. If you go out on the streets of this city and brutalise people and strip away their rights because a security company’s instructed you to do whatever the hell you like so long as it keeps people indoors and scared ? Then you’re adding nothing to this world. And someone should just fucking cut you out of it. And when people start dying for the crime of ruining lives ? A hell of a lot less people will do it.” 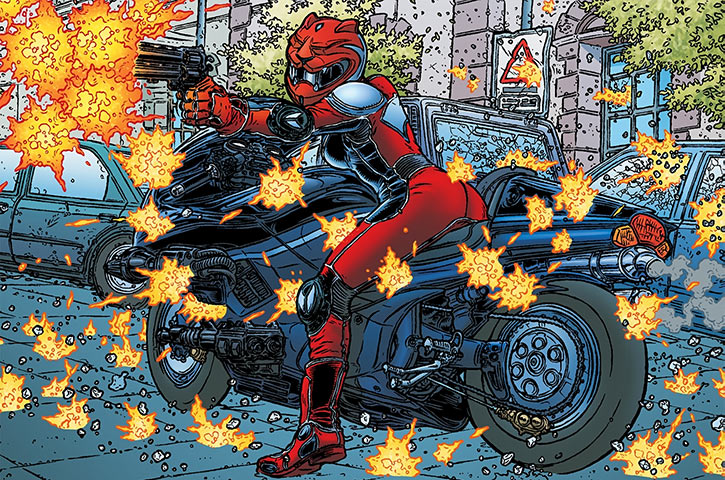 Angel One: “I’ve been made. And that’s an awfully big gun they’re setting up down there. You don’t think.”
Kathryn: “Just go and collect that one-legged dickslap we used to work with. Try not to think. I’ve got you covered.”
Angel One: “Bitch.”

Dominic: “You have to draw a line somewhere, and I draw it at overthrowing the government.”
Kathryn: “What if we were in Germany in 1939 ?”
Dominic: “That’s a bullshit argument.”
Kathryn: “Really ? What if the only thing that separates America today from Germany then is hindsight ?”
Dominic: “The government are not Nazis. I don’t see any gas chambers, do you ?”
Kathryn: “You ain’t looking very hard. You can’t see concentration camps either, I bet.” 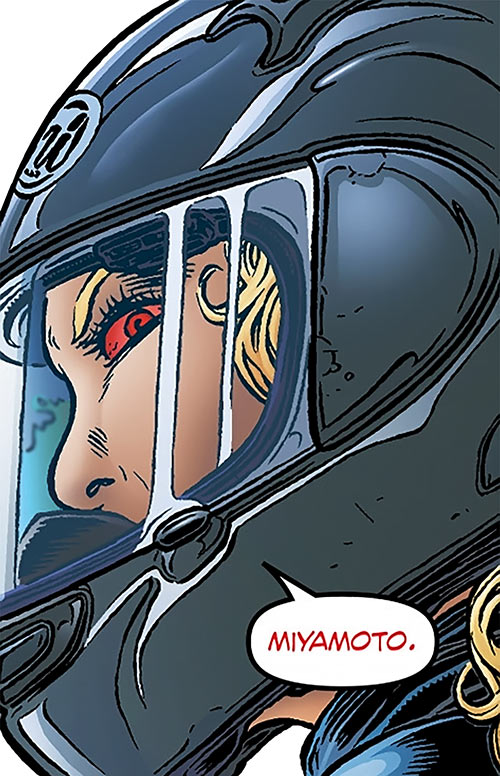 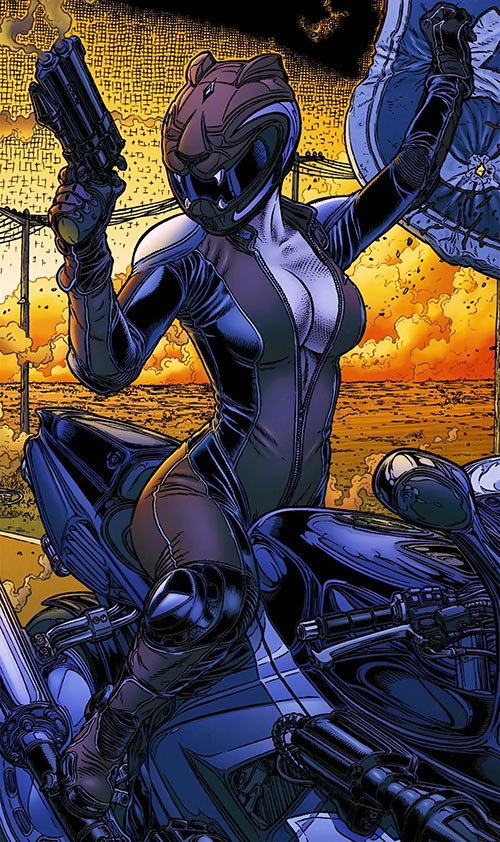