Animaniacs was a popular, successful animated TV show during the 1990s. It was mostly made of humorous skits, held together by the three main characters, and occasionally with songs. Over the years it developed a large cast of recurring characters, such as Katie Kaboom.

Katie is a spoof of the Hulk (hence her getting a character profile here). She’s a teenager who turns into a rampaging monster.

“She’s Katie Kaboom, Katie Kaboom
She lives in a house with a garden in bloom
Her family knows that anytime soon
Their little lady Katie… goes… kaboom.”

Simple, but that’s more or less it. When angered, Katie slowly transforms into a monster. It actualizes her innermost feelings, which generally turn into a general rampage of destruction and chaos.

That sometimes involves laser beams, but always ends with a massive explosion.

The explosion effectively “vents” her aggressive tendencies. After it, she once again becomes a cute, giggly teenager.

We do know that Katie is a popular high school girl, and has recently begun dating. One “non-date” with Brad was nearly preempted by a facial blemish, which sent her on a spiraling rage that destroyed the house.

Another non-date was also preempted when her father wouldn’t relinquish the phone, which sent her on a spiraling rage that destroyed the house.

A real date, with class president and wrestling team captain C.B. was then cut short. Katie learned that C.B. was actually a giant chicken, which sent her on a spiraling rage that destroyed the house.

When she got her learner’s permit to drive, she worried that her father’s advice was a bit tedious and overbearing. This sent her on a spiraling rage that destroyed the house.

Another time, her mother commented unfavorably on Katie’s new clothes, which sent her on a spiraling rage that destroyed the house.

Hey, does anybody else sense a pattern…?

Katie is the stereotypical cute, giggly teenage girl. Her blonde hair is shoulder-length, and her outfit generally consists of those absurd pink stretchy pants that only high school girls seem to think are flattering, a floppy white sweater and what appear to be dancing shoes.

As she transforms, she becomes a monstrous version of herself, generally with green skin. The shape of her body and head tends to vary with the reason for her anger. Monstrous acne, for example, if her anxiety is over a pimple, or telephone-shaped, if she isn’t allowed to call a friend.

As previously mentioned at least twice, Katie is cute and giggly. “Perky” might cover everything.

OK, yes, except when she gets mad. Then she instantly turns into a rampaging monster with the “crush, kill, destroy” mentality, up until she explodes.

In the Marvel Universe, Katie could fit anywhere. She might be a tragic “villain of circumstance” for Spider-Man or the Fantastic Four to corral. And who will develop a crush on Parker or Storm, of course.

She could be stuffed into the Mutant Ghetto, to learn to control her anger and hone her powers.

Or, she might have been hit by a small gamma bomb. Since the average person wouldn’t much like Katie when she’s angry, either.

The less said about DC’s Animaniacs comic — even if we start fiddling with Hypertime  — the better.

The most obvious thought is to zip Pre-Crisis and stick her in the Legion of Substitute Heroes. She can hardly be less interesting or useful than, say, Double Header or Antenna Lad. Arguably, Post-Crisis, she could instead take the place of Monstress.

In the 20th century, she could easily be a generic victim of either the Dominator Genebomb or one of the Bloodlines parasites. Though that doesn’t give her any context to speak of.

Oh, heck. Cute kid with a destructive super-power ? She could honestly fit in as a one-shot, anywhere, where the hero has to connect the disasters with the personable child recently introduced, and so stop the monster without harming Katie.

Any of the “hipper 1990s” heroes (Flash (West), GL (Rayner), and that crowd) would probably welcome the Kaboom family into his supporting cast, too. 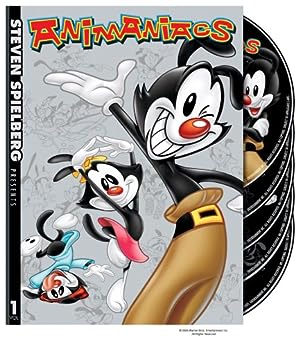