Katinka is a professional vampire hunter. She burns with a deep faith (a crucifix blow from her burned off most of the flesh on Dracula’s head and set him on fire), and is unusually pragmatic and collected. She also evidenced superior deductive intelligence.

She has remarkable medical skills and carries appropriate equipment. Whether she’s a certified medical doctor is unclear.

Katinka is a remarkable driver. She could drive a Jeep at a good speed, in the mud of a cemetery, under a heavy storm, while smashing into zombies. Try it and see.

While she’s technically not an albino (her condition is supernatural), she is highly sensitive to sunburns and bright lights.

Katinka is a vampire hunter and something of a mystery. She is a contact of Blade (Eric Brooks), who introduced her to Frank Drake and Judiah Golem. She seems to be from an American area speaking a form of French – perhaps Haiti.

Like with Blade, Katinka’s mother was killed by a vampire while giving birth. In her case, it was Dracula. The baby’s life was saved, but exposure to her dead mother’s vampire-tainted blood made her sick.

Unlike Blade, that did’t make her a “day-walker”. It just gave her pink eyes, chalk-white skin, pale straight hair and a sensitivity toward sunlight and bright lights.

Look for the helpers

In 1991 Blade called upon Katinka to help with Marlene, Frank Drake’s wife. She had been bitten by Dracula. Katinka made a complicated mixture of herbs that established that evil magic was permeating the hapless Marlene.

Though Mrs. Drake had to be restrained and was increasingly bestial, Katinka — who seems to be some sort of doctor or biologist — set up a series of self-transfusions for Marlene. She filtered parts of Mrs. Drake’s blood then injected it back.

She also analysed the content of her blood filters, to find a way to destroy vampiric ichor. This data from Mrs. Drake’s blood could also be of use to cure Katinka and Blade.

Sensing this, Dracula came to claim Marlene. Blade and Drake engaged him in combat and struck hard, but were overwhelmed. However, Katinka jammed a large crucifix into Dracula’s face, setting him on fire with her faith. The vampire was forced to flee. Marlene apparently recovered her free will thanks to the transfusions, but Katinka knew that Dracula would return.

Katinka knew that Marlene would gradually revert to being a thrall of Dracula as long as the Lord of Vampires was active. Therefore she, Blade and Drake tracked Dracula down. This was made easier as Dracula had to massacre people to obtain enough blood to heal the damage inflicted by Katinka.

However Marlene telepathically warned her master, and Dracula escaped. Marlene then joined Dracula, who animated hundreds of zombies at Arlington.

The vampire hunters located Dracula, but there were too many zombies. Though she drove her jeep through many of the walking dead, Katinka was nearly killed trying to get Drake out of there. Drake beat back the corpses who had boarded Katinka’s car, and they narrowly escaped.

Dracula was then destroyed in a ritual backfire as Drake and Katinka got the now-free Marlene out. Against Drake&rsdquos objections, Katinka insisted upon going back in to find Blade. They did find him, though he had been driven mad and had to be locked up.

Katinka told Marlene and Frank to rest, and that she would assemble a new generation of vampire hunters. It is heavily implied that Inspector Judiah Golem soon joined her. However, none of this nascent generation of hunters was seen again. Later stories instead featured the better-established characters.

Katinka has a very pale skin and unnerving red eyes. Under many types of lightning, she doesn’t look human.

She favors rugged, outdoors type clothes. She’s often seen with medical tools, such as a stethoscope around her neck.

Katinka is a very strong and collected woman. Unlike many vampire hunters she’s a reasonable person, and knows quite well when to run to fight another day.

She has a strong sense of destiny. Namely, that her momma’s death has put her on Earth to nurture the weak and solve vampirism.

Katinka is caring with victims, and willing to shoulder an unlimited amount of burden.

Katinka speaks a sort of Creole of English. However, there’s no clue in the story as to her homeland. It’s not really African American Vernacular English, and seems closer to an islander patois.

(Under a fierce storm) “My momma, she died on a night like dis.”

“Girlie, you t’ink you be in love, but he be spookin’ you wit’ his power. And he would be killin you wit’out a t’ought if he decide to.” 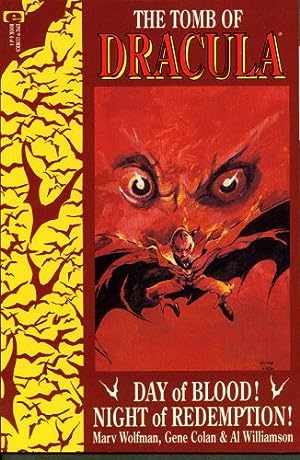 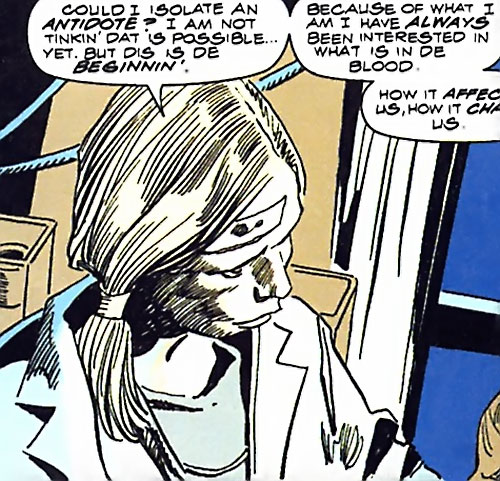 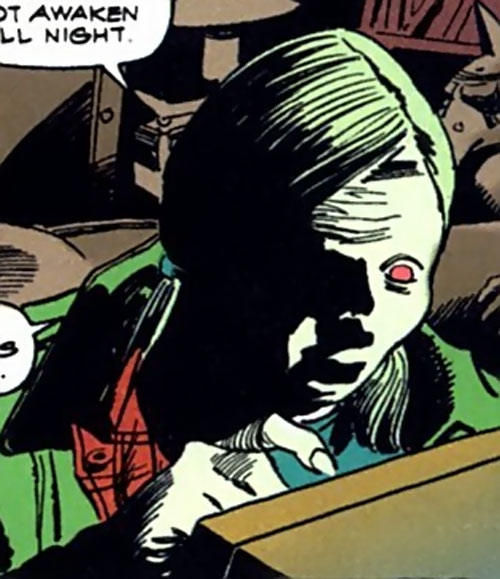