Hayashi Kato was trained by his father in traditional Hayashi martial and stealth techniques.

Though he’s a superlative swordsman, he now fights with less-than-lethal methods – chiefly unarmed combat, though he also uses traditional weapons. He usually carries a nunchaku and shuriken, these weapons being both effective and easily concealed and carried.

Kato uses his shuriken one at a time to wound, not as comic book-style deadly volleys. Some of his shuriken are tricked out with tattoo ink and a saline solution that will near-permanently dyes green the skin around the impact – the “mark of the Hornet”.

A manriki-gusari is also shown and mentioned, but never used.

Though the book presents Kato’s fighting style as cinematic martial arts with jumping kicks and the like, it might be closer, in-universe, to bujinkan-type taijutsu. In Kato Origins he seems to see himself primarily as a karateka, trained in an unspecified school (quite possibly a form unique to the Hayashi).

Though the genre of the story is low-cinematic  and feature low power levels, Kato is devastating. In DC Heroes RPG terms his DEX in particular is much higher than most of his opponents.

His techniques often surprise his foes. This is doubly true since most do not expect an “Oriental” to fight back against White men, and have never seen a karateka or a nunchaku. Given his training and these edges, Kato can thrash entire groups of street thugs.

However, if he’s hit by a lucky attack, Kato is in as much trouble as anybody else – especially if he gets shot.

During his studies he demonstrated a talent for science. Mr. Hayashi is well-grounded in chemistry and physics. He helps Rusty with the conception and testing of his and Reid’s equipment. He also learned various valet skills.

Kato’s stealth and intrusion techniques are remarkable. Being more adept as a cat burglar than the Green Hornet, he usually leads the way so the Green Hornet can use the ropes Kato leaves behind.

Hayashi is a swift, efficient climber who moves in complete silence. These second-story skills are put to good use to attack by surprise (often while the Hornet is distracting the opposition through theatrics), and for B&E.

Kato apparently learned to drive in Chicago, since his role as a valet including being Reid’s chauffeur. If so he learned extremely fast, for within months Kato was an expert driver and knew everything about automobiles and car mechanics. He helped design and improve the signature motorcar he and the Hornet use — the Black Beauty.

The Beauty is a powerful custom-built coupé. The carbon-steel-reinforced body is proofed against small arms fire at least up to .45 ACP and 12-gauge buckshot. The windshield is a layered blend of glass and polychromatic film that can stop most handgun rounds.

It can be driven in darkness – the headlights can emit deep green light, and the windshield’s filter makes this illumination visible, albeit monochromatic. To outside observers only a slight glow is visible.

There are dispensers in the rear loaded with a smokescreen (green, of course), caltrops (“tyre mines”) and oil (mentioned by not used during the story).

The front bumper is magnetised and reinforced – by rear-ending another car it is possible to have it stick to the Beauty’s bumper. Usually the impact and the shape of the bumper will slightly raise the other vehicle, which is important since most cars back then were rear-wheel drives. A RWD car stuck to the front of the Beauty is helpless. The magnetism can be engaged and disengaged at the touch of a button.

She can do zero to 60 in under five seconds. Generally she’s state-of-the-art by late 1930s standards.

The small Hayashi samurai family is from Osaka. They have traditionally served as shadow operatives for the Emperor – as ninja. During the 1920s, Hayashi-san was proud to serve the Taishō Emperor, who continued many of the liberal Meiji policies with a Western influence.

In late 1926 the Emperor died. The policies of his successor, who would become the Shōwa Emperor (best known in the West under the name “Hirohito”) were viewed with great scepticism by Hayashi-san.

The samurai disliked the militarism of the new Emperor, and in particular his adventurism. In his opinion, the Japanese people should keep living on their gods-given island rather than expand in foreign lands.

Kato was trained in the familial arts since boyhood. First, his father taught him the traditional skills of the samurai – and in particular swordsmanship. Then, once he was of age, Kato was trained as a shinobi.

Circa 1936, Kato enlisted in the Imperial military as a private. He disagreed with his father, and saw it as his duty to serve the Emperor regardless of policies. Back then the military was recruiting young men to serve in Northern China. The lad was trained in Nagasaki. 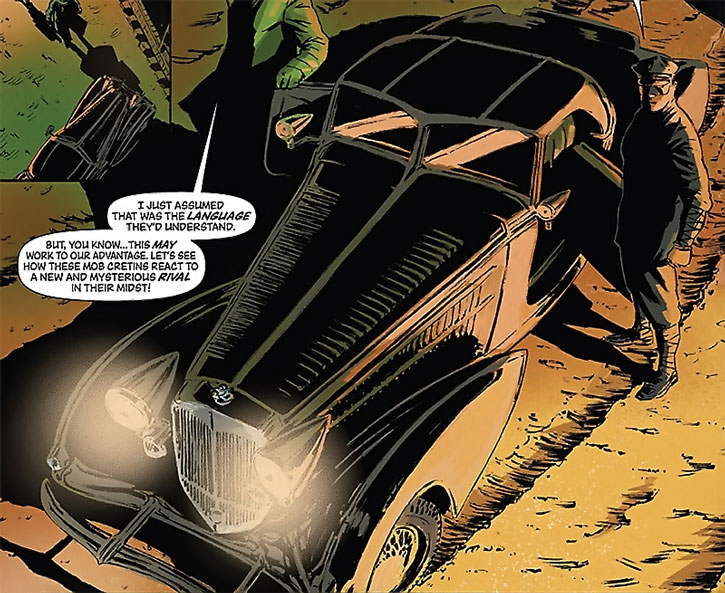 Kato and his fellow recruits were deployed in China in 1937, presumably around October. Suppressing the Kuomintang in Shanghai during the Summer had proved far harder and deadlier than expected, and Japan had to deploy many more men.

The Chinese government relocated from Shanghai to Nanking, and though the Japanese forces in Shanghai were still reeling from the battle there they were ordered to pursue in December.

As a member of the Shanghai Expeditionary Force, Hayashi Kato fought and killed during the march on Nanking, which saw a number of war crimes. Taking Nanking was followed by weeks of extraordinarily brutal carnage, rape, mutilation and theft.

Deeply shocked and feeling dishonoured, Kato eventually snapped when his sergeant used his Hayashi blade to behead a child his men had been gang-raping. Private Hayashi killed his fire team, then used his katana one last time to execute his commanding officer.

He swore that he would never knowingly take a human life again, and considered that he was no longer worthy of bearing a sword.

Trying to atone for the crimes of the Expeditionary Force, Kato used his shinobi skills to sabotage and delay the military of his own country. However, he knew that it was but a matter of time until he was caught. A few weeks later, he was captured after he sprained his ankle.

A tiny number of Westerners were in Nanking at that point. These included the American Britt Reid, who had been travelling around the world and getting into trouble. Reid saved Hayashi from a Japanese firing squad using a nearby power line. 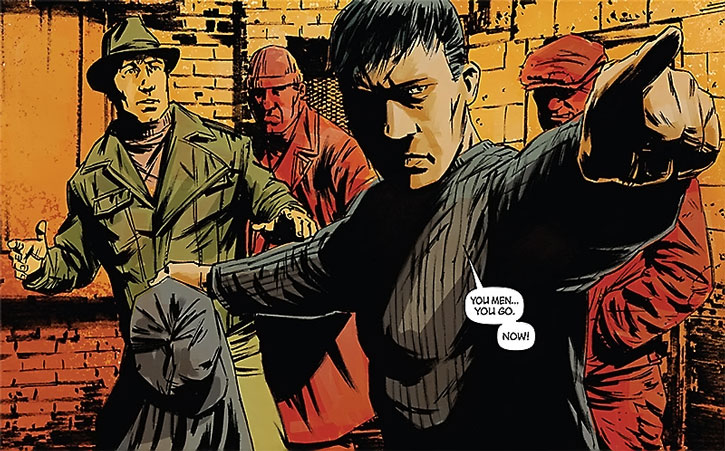 The two men then fled Nanking and eventually China. They sailed to San Francisco on a Japanese merchant ship, with Kato passing himself for a man of wealth and Britt playing the role of his manservant.

Once they arrived in Chicago, Reid learned of the recent death of his father, a crusading newspaper owner. Needing a job, Kato offered to replace Reid’s butler, who retired followed the death of the elder Reid.

As Britt Reid decided to become a vigilante, Kato was critical in creating the Green Hornet identity. The young Japanese suggested operating from the shadows and wearing a mask. His proposed mask design was inspired by traditional samurai suits of armour.

Hayashi trained Reid in the martial arts, and helped “Rusty” Schmidt, his engineer, design many of the Green Hornet gadgets.

After Reid agreed with Hayashi’s suggestion for masks, the Japanese man made himself a leather mask (using the same general shape as the ad-hoc mask he wore for nocturnal sabotage in Nanking). He also designed a costume that was halfway between a black leather chauffeur ensemble and a Japanese field outfit.

The chauffeur outfit was presumably inspired by the supercar Rusty and Kato built to serve as the Green Hornet and Kato’s vehicle, as Kato was normally doing the driving.

In 1938 the Green Hornet and Kato started visiting vigilante justice on the Chicago underworld. They originally focused on “Skid” Caruso, the kingpin of Chicago, whom Reid’s father had never managed to expose due to the tremendous corruption and influence wielded by the mobster. 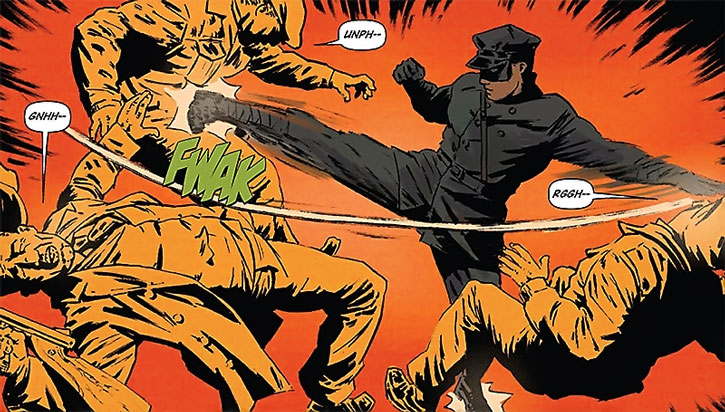 During an early sortie, the Hornet and Kato stopped 6 enforcers racketeering union yardmen. The Hornet’s intimidating theatrics accidentally convinced the yardmen that the Hornet and his ally were also criminals.

Reid decided to run with it. It was soon widely assumed that the Green Hornet and Kato were criminal enforcers and torpedoes muscling in into rival turf for an unspecified mob.

Kato and the Green Hornet eventually sent Caruso to prison – the beginning of many adventures.

Hayashi Kato is a very professional and disciplined man, and a person of integrity and honour. He cherishes the bushido values his father taught him – integrity, courage, charity, respect, honesty, honour and loyalty.

A patriot, he couldn’t accept the horrors wrought by the Shanghai Expeditionary Force in the name of Japan. As he could no longer serve the Emperor, this left him in the unenviable position of being a masterless samurai.

Mr. Hayashi decided to serve Mr. Reid instead, considering that he was a well-meaning man who had saved his life and was working to make the world a better place. However, he initially expected the struggle to be crusading journalism.

Hayashi and Reid do not work along traditional feudal lines, though. Kato works as a valet and chauffeur rather than as a full time warrior. At the same time he and Britt are close friends and see each other as peers, whose skills complement each other’s well.

In the field, Kato lets the Hornet do most of the talking and decisions-making. After all the Hornet knows the city, the mobs, the customs, etc. much better than Kato does, and he’s the sort of, kind of the boss.

However, when it’s Kato who is in his element (for instance to use ninja tricks) he’ll unhesitatingly take initiatives and provide but brief explanations to the Hornet.

Generally, Kato prefers actions to words — plus, the Green Hornet talks more than enough for the two of them. Hayashi also prefers not to use guns, as these remind him of the Imperial military.

Kato seems inexperienced in matters of the heart, having likely gone straight from being trained by his father to boot camp. He did fall in love with a young Korean-American woman in San Francisco in 1942, but their love proved tragically impossible.

“You are no comrades of mine ! The Nippon of my pride and my heart would not massacre innocent civilians ! Much less defile their women and children ! May you all burn in Hell !”

“Britt-san, there is a way. In Japan, when conventional methods have failed… there is another manner of defeating one’s enemies.”

“If I may, Britt-san, what Mr. Schmidt speaks is the truth. A samurai’s path is straight and unwavering. But the way of the ninja is one of shadows… and mystery.”

“Britt-san is right. No killing. Plenty of pain… but no killing.”

Drawbacks:
SIA to Upholding his father’s bushido, Exile (Involuntary), Mistrust, Secret Identity, Misc.: Kato vowed never to knowingly take a life (but if an accidental death happens, it’s OK), Misc.: Kato’s ancestry makes him a second-class citizen in the setting. After Pearl Harbour, this worsens considerably and he further acquires a sort of Secret Identity – having to pass for Korean without speaking the language or knowing much about Korea.

This version of the Green Hornet tales is low cinematic – most people have modest Attributes and Skills, the Genre is about Real, and Killing Combat attacks cause bleeding.

A recurrent element is that being hit hurts. BODY scores and HPs are generally low, and any attack using a weapon has its EV increased by one as a Genre rule (so a mediocre pistol with Projectile Weapons: 03 would have an EV of 04, an EV 03 knife would be EV 04 (possibly more with STR and/or Martial Artist), etc.).

Since this is a Genre rule, the EVs of the weapons in this entry are given *without* the +1 Bonus. 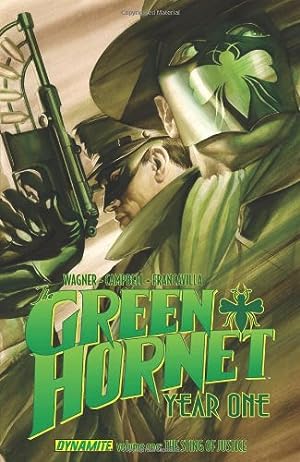 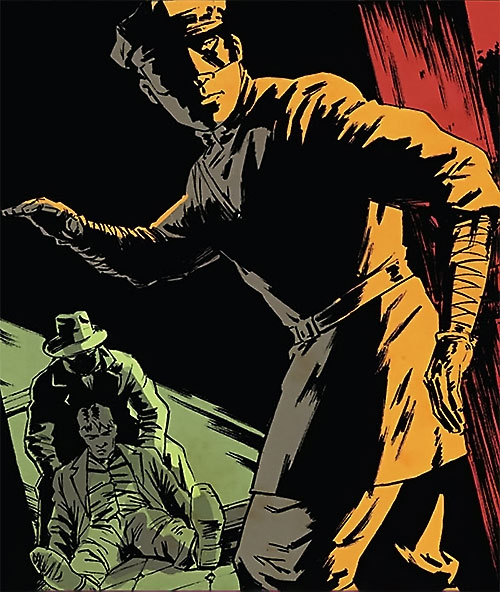 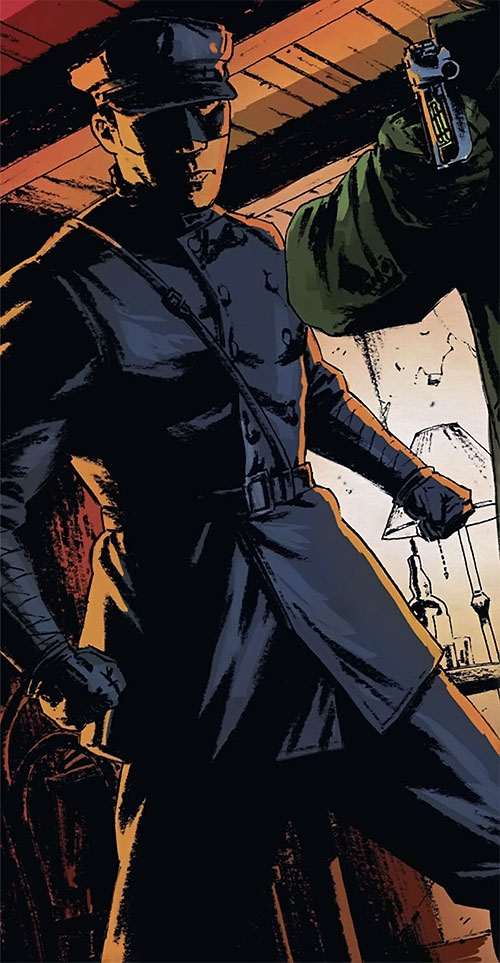 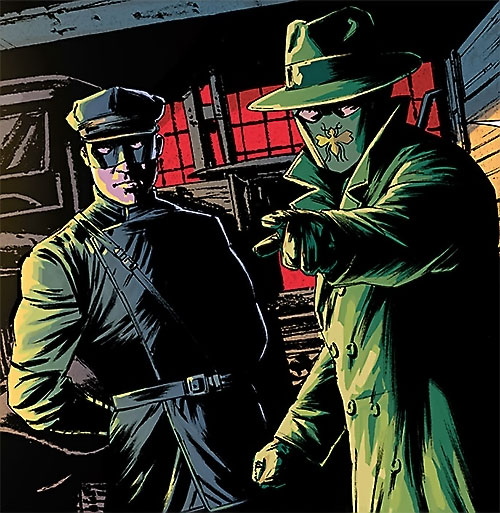 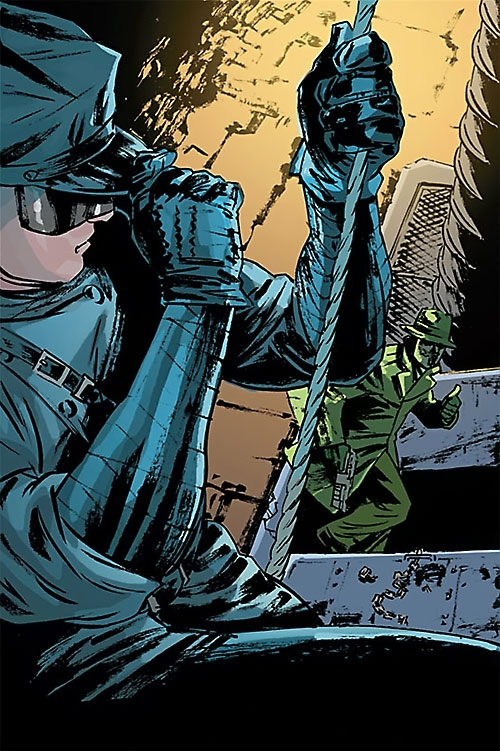