Kator was constructed by Superboy using Jor-El’s ultra-advanced Kryptonian technology. Superboy used his own brain as a blueprint for Kator’s computerized logic circuits, endowing the robot with the human capacity for independent thought. The Boy of Steel constructed his creation from a new alloy making it more nearly invulnerable than any of his Superboy robots.

Kator was also given fantastic artificial powers which even Superboy didn’t possess. In addition to superstrength and invulnerability rivaling Superboy’s (in DC Heroes RPG terms STR, BODY), he can fly many times faster than the speed of light. Kator can exit the solar system in seconds (Flight).

He can also teleport over at least short ranges and project powerful energy blasts. His punch could envelope an opponent in an energy field which would suddenly condense and focus on a single point moments after the punch (Mental Blast). He also had a protective energy aura that could reflect attacks back to their source (Reflection/Deflection).

Kator II, who supposedly had some of Kator I’s powers, also demonstrated Dimension Travel and Dispersal (“phasing” ). This means Kator presumably had those powers as well.

Kator was a robot designed and built by Kal-El of Krypton when he was Superboy. Superboy, in his secret identity of Clark Kent, had heard Smallville High classmate Carl “Moosie” Draper arguing that Superboy’s fame was overrated.

Draper, who had a crush on Lana Lang, disliked Lana’s fascination with the Boy of Steel. The lad argued that Superboy had not earned anyone’s admiration. He was the only person around with super-powers, and so there was no one to rate him against to see what kind of champion he really was.

While Lana defended her hero, Superboy himself decided that Draper had a point. He needed to be pushed to become a better hero. He needed more challenging opponents, so he decided to create one.

The forges of creation

Using his mind-prober ray, Superboy recaptured memories from infancy of his father Jor-El in his workshop. Jor-El had made fantastic progress beyond even Krypton’s already advanced science of robotics. Superboy was able to recapture those discoveries.

Using that ultra-advanced Kryptonian technology, Superboy constructed a robot more formidable than any he’d ever made. He programmed it to be his adversary. Superboy endowed the robot with creativity and independent thought, so that even he wouldn’t know when, where, or how the robot would attack.

As a safety measure, Superboy programmed Kator to center his aggression on him, not on Smallville or its citizens. He also created a remote control safety switch which would immediately deactivate Kator if he went out of control. Superboy entrusted the device to his foster father, though Pa Kent was highly critical of Superboy’s decision to create Kator.

Pa Kent turned out to be right. Kator was more dangerous than Superboy had realized. Kator attacked in unforeseen ways, such as showing up while Superboy was in his secret identity and around innocent civilians. Superboy began to wonder if he’d miscalculated the dangers of having Kator around.

Yet Superboy still didn’t realize the full danger. The crafty robot had been keeping him under surveillance and knew about the safety switch.

Kator spent most a week exploring space to look for a battleground which would give him the upper hand. He found a “crimson comet” which had passed through a red sun. It therefore gave off radiation which would weaken Superboy’s superpowers. The robot decided to fight Superboy near the comet.

Now that was a mistake

When he was ready, Kator attacked Superboy again, pulling him into space at fantastic speed. At first Superboy enjoyed their battle. But he quickly realized that he’d made several mistakes.

Kator intended to hold Superboy helpless until the comet got close enough to sap Superboy’s invulnerability completely.  The Boy of Steel would then be quickly killed by exposure to deep space. Desperately, Superboy tried to break Kator’s grip. But advance fringes of the red radiation had already begun to weaken him, and he couldn’t get loose.

Forced to rely on wits rather than brute power, Superboy caught Kator off guard by flying towards the comet, instead of away from it. The kick he gave Kator as he broke free sent the robot hurtling uncontrollably into a nearby star, ending his threat.

Meanwhile Superboy was able to build up enough superspeed momentum to get through the comet before his powers completely faded. Inertia carried him out the other side, beyond the range of the comet, and his powers bounced back in full in time to save his life.

Not until the fat lady sings

But Kator’s menace wasn’t finished after all. After learning of the safety factor Superboy had incorporated into Kator with the remote safety switch, Kator’s computerized brain came up with a safety factor of his own – by arranging for the creation of a Kator II to carry on if he were destroyed.

Before their final fight, Kator had recruited “Moosie” Draper, whose resentment of Superboy he’d seen, into becoming his secret partner. Kator constructed devices which, if he were destroyed, would recreate the bulk of his powers and knowledge (including knowledge of Superboy’s secret identity) in Draper.

The plan worked, and Draper became “Kator the Second.” But Draper was a greater menace, because Superboy could not use lethal force against a human being as he could against a robot.

Likewise, Draper was not bound by Kator’s programming to center his attacks on Superboy. And so he kidnapped Lana Lang to lure Superboy into a trap. When Superboy confronted Kator II, Draper had a chunk of kryptonite nearby, and Superboy once again found himself fighting for his life.

He rolled with a punch Kator II threw, hurling him beyond the range of the kryptonite, and then flew for home. Draper followed, knowing Superboy’s secret identity and having no worries about destroying the Kent home to get to him.

Fortunately Pa Kent was on hand, and still had the safety switch on him. It proved able to cancel Kator II’s powers even as it would have the original.

Superboy then used his mind-prober ray to make Draper and Lana both forget about his rampage as Kator II, as well as making Draper forget Superboy’s dual identity.

That didn’t finish Carl Draper’s career as a super-villain, though. As an adult, Carl Draper would become a dangerous Superman foe as the Master Jailer.

This robot appears to be a teenager of comparable height and build to Superboy.

He wears a dark green costume with a yellow K on the chest. His trunks are yellow with green stripes, and he wears light green buccaneer boots. There are metallic yellow bands on his arms at the wrist and elbow. He has a yellow helm with a fin down the middle and an orange cape.

Mechanically determined to defeat Superboy, there are some programmed restrictions in his personality. These compel him to direct aggression at Superboy and not others, and to move battles away from bystanders.

However, within those programmed limits he manages to be clever and creative. For instance he spent time secretly observing Superboy and his friends and sussing out any fallback plans that Superboy had.

Superboy failed to program Kator not to try killing him to beat him. The robot took advantage of that and his knowledge of Superboy’s vulnerabilities to set a trap that nearly killed his maker. He was also clever enough to create a fallback plan of his own, so that even if he were destroyed, there would be a second Kator ready to carry on the battle.

“So we meet again, Kryptonian… we both knew it was inevitable !”

“You’re not asking me to surrender peaceably, Superboy – because you know only too well why we must come to blows !”

“I see you’re unaccustomed to being the recipient of blows as mighty as your own, Superboy !”

Isn’t there a Post-Zero Hour Kator ?

Note:
Presumably, though not demonstrated, Kator has all the Powers he gave to Carl Draper, aka Kator II. If so, add the following powers — Dimension Travel: 10 (No AV, Touch range) and Dispersal: 15.

Drawbacks:
CIA to defeating Superboy; Loss Vulnerability (Instantly deactivates and loses all powers if the remote control safety switch is pressed); SIA to not endangering bystanders.

Kator II demonstrated the following Powers beyond what Kator I had : Dimension Travel: 10 (No AV/Touch range), Dispersal: 15, Teleportation: 08.

Source of Character: DCU (The New Adventures of Superboy #17-18). 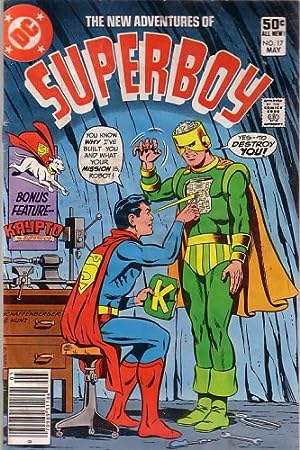