Ken the Hitman only appeared in a short feature in an anthology Marvel book in 1993. He’s thus obscure, and not genuinely interesting.

*But*, he fills a simple bad guy niche quite well. Plenty of superhero role-playing situations can use an elite henchman (or even “sub-boss”) like Ken.

Ken is somewhat tall and built like a garbage truck. He’s the ’giant henchman’ type, and can take a huge amount of punishment and keep smiling.

He leads from the front – to the point where his men know they should never be physically ahead of him. His main tactic is to have everybody lay a huge volume of suppression fire so they can get close to the target to finish the job.

When he’s fighting, Ken always blasts out his playlist of hardcore music in the earbuds of his MP3 player. This is despite the obvious disadvantage this represents. And remember kids, doing so will damage your hearing !

Of course, if faced by an unarmed martial artist, he will also fight unarmed.

During his appearance he was backed by local mercenaries that seemed to be ex-military. Use the stats for average soldiers and give them medium-calibre pistols and submachineguns.

Ken the hitman was hired to kill Taka, an older mob type. Taka had turned Federal informant and was to be taken to a secret safe house. The mob gunning for Taka learned where the Fed convoy carrying him would drive. Their retained Ken used what seems to be his usual approach – a direct assault.

Three helicopters carrying mercenaries equipped with automatic weapons flew in, intercepted the convoy, and pinned it with gunfire. Then Ken, emptying a few clips with a large smile, went in.

And it would have worked, too, had Iron Fist not been riding on the convoy has part of favours bartering with a Federal agent. Although initially surprised by Ken’s toughness, he managed to force him to flee, and Ken seemingly died in an helicopter crash.

A tough hitman who very seldom speaks and just charges in with his gun blazing and his music cranked to 11. He usually has a huge grin.

Drawbacks:
MIA toward listening to his music while fighting. 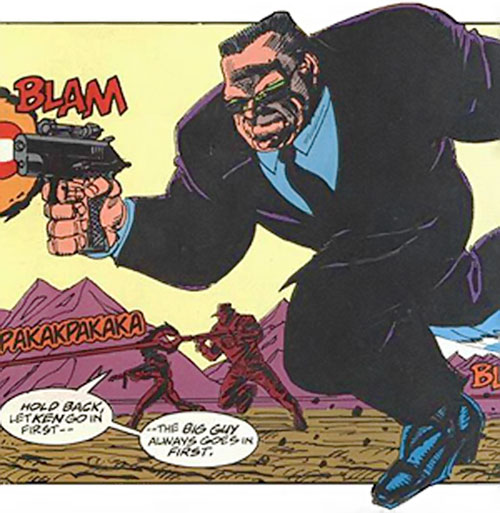