Ken is one of the core, traditional contenders in the famous series of brawling video games Street Fighter. His moves set is comparable to that of the main character Ryu, including the famed Dragon Punch.

Ken is a world class martial artist, one of the best in the world and has won the US Martial Arts Tournament three times in a row.

His training allows him to summon his chi into a ranged attack (Energy Blast) and leap to superhuman heights (Jumping).

He is also one of the most renowned fighters in his entire universe.

Ken did NOT participate in the first Street Fighter 1 tournament. Instead, he went off to fight in the US Martial Arts tournament and became champion as well as met his girlfriend, Eliza. He got back to his master Gouken’s dojo just in time to see Gouken get killed by Gouki.

Ken wondered where his rival, Ryu, went, and went searching for him. He finally found Ryu, but he knew that something was wrong. Ryu was full of anger and rage, and when they fought, due to Ryu’s mind being clouded, Ken won. 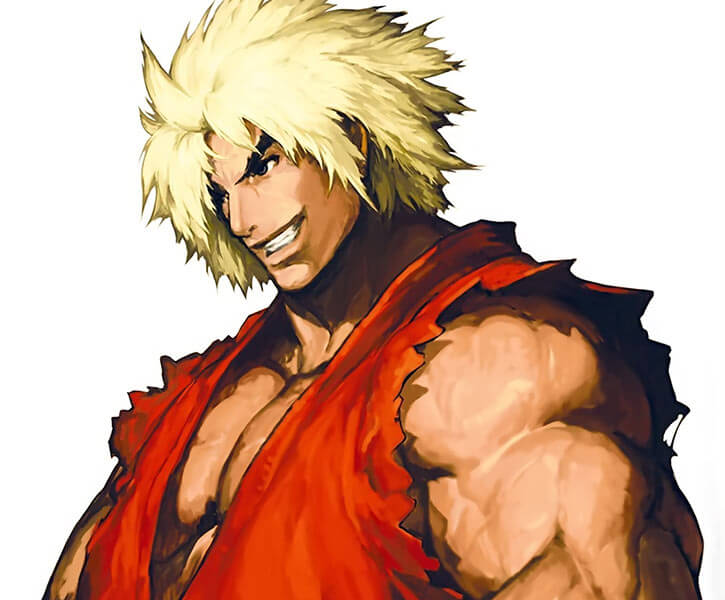 Ken gave Ryu his red headband as a reminder for him not to lose again. He told Ryu that he realized that Ryu was distracted and that Ryu needs to be focused. Ryu thanked Ken for helping to get him back on track.

Ken decided to seek out Ryu again. Karin, whom he talked to about her rivalry with Sakura, which made him realize the greatness of the challenges of his rivalry with Ryu, himself, then approached him. Eventually, Ken arrived in Thailand.

There he ran into Ryu’s number one fan, Sakura, who asked him to spar with her for a bit because she was about to meet Ryu for a match. After that, Sakura and Ken left to see Ryu, but found a brainwashed Psycho Ryu under Master Bison’s control instead! 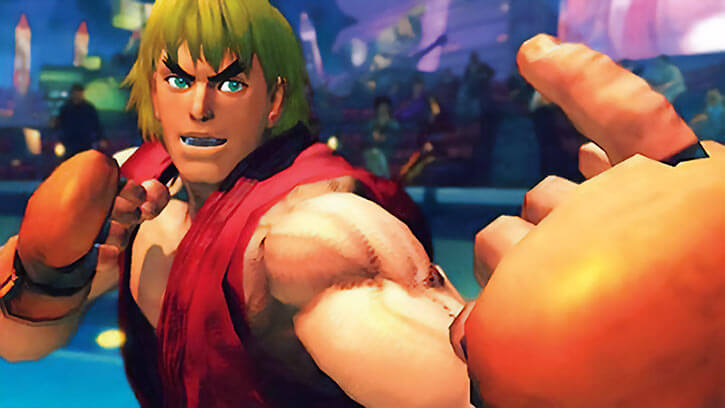 Luckily, Sagat had arrived at the same time and saw that Ryu had been brainwashed, too, and was disgusted by it. Together with Sakura, Ken held off Bison as Sagat fought Psycho Ryu. Ryu thanked Ken afterwards, telling Ken that the experience made Ryu realize a new awareness and that martial arts was more vast than he could have ever dreamed. Ken and Ryu’s friendly rivalry continued.

Ken continued to train, readying himself for the next time he would get to fight with Ryu, remarking to himself that those are the greatest times of his life.

For the past years, Ken had let his skill deteriorate and spent most of his time on the beach with his girlfriend. Only a challenge from Ryu, rekindled his fighting spirit. Ken participated in the SF2 tournament, but eventually was approached by his girlfriend, Eliza, whom he finally ended up marrying and settling down with.

Ken participated in the tournament and beat his own student, Sean, though he didn’t win the championship. He was also training his young son, Mel, to be a fighter (though at this point in Mel’s age, it was more like playing than training).

While Sean was enthusiastic about participating in an upcoming martial arts tournament, Ken was bored. He hadn’t fought a strong, formidable opponent in a long time. Because of this, Ken had lost his fighting spirit. Around this time, Ken heard rumors about some “Organization of Mystery”.

The sense of the danger left a burning desire in his body, and his fighting spirit was been rekindled. He apparently while investigating the organization. 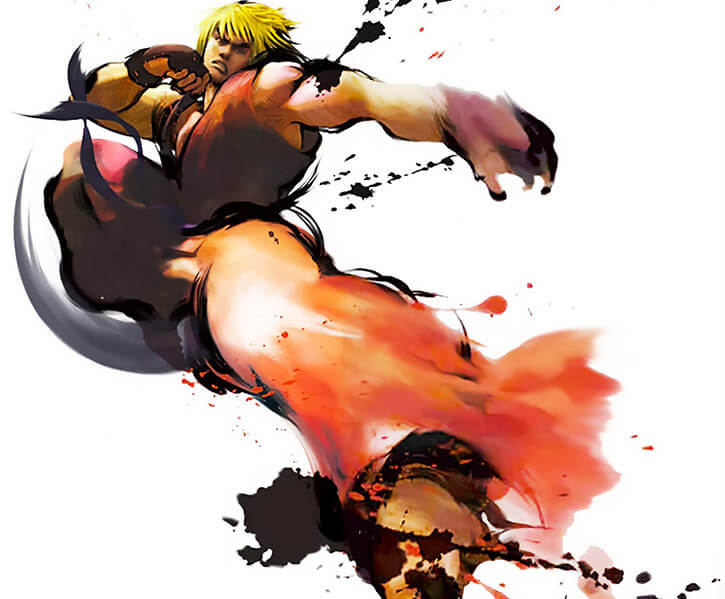 What happened during the course of his investigation is unknown, but he did manage win the US Martial Arts tournament (which was totally separate and unrelated to the Street Fighter circuit) for the third time in a row. He offered the trophy to Sean, but Sean declined it, saying he wanted to win it for himself.

Ken has a family life, but he continues to practice and train, too. He’s still training Sean and his son. And of course, Ken’s rivalry with Ryu continues.

Ken is a ¾ Japanese and ¼ American and tries to cultivate the blond American surfer boy look (by bleaching his hair, he’s actually not a natural blond which explains why his hair goes through so many different shades from game to game). He is a considerably good-looking stylish man and has plenty of fans.

When training he tends to wear a red karate gi with the sleeves cut off and when he isn’t training he wears expensive designer clothes and tools around in sports cars and the like.

Ken’s a serious martial artist and an overall good guy. But at the same time he’s more than a bit of a showboat.

Even though he’s from a prestigious wealthy family he’s a still a record breaking martial artist that desires the one thing that he doesn’t have — beating Ryu and being the greatest martial artist in the world.

He also tends to get a bit distracted at times with his family life, which makes him a bit more normal than most of the other Street Fighter characters who only live for the fight.

“Don’t be taking me lightly !” 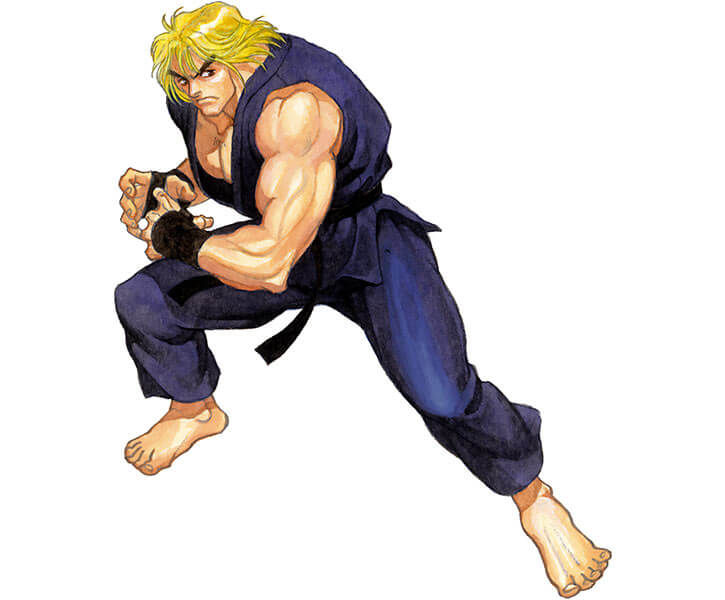 “Failure is an instant pinch, yet, it’ll probably be interesting.”

“Here’s some sense for you fella – better watch out !”

“Just you wait Ryu ! I, your rival am the marking man, I’ll surely show you !”

The versus series enhanced most of the SF cast that it crossed over with considerably making them capable of going toe to toe with Marvel’s heavy hitters.

Helper(s): Sean McDonald (for the other take), GameFAQs  (for everything that you ever wanted to know about the Street Fighter universe and more !). 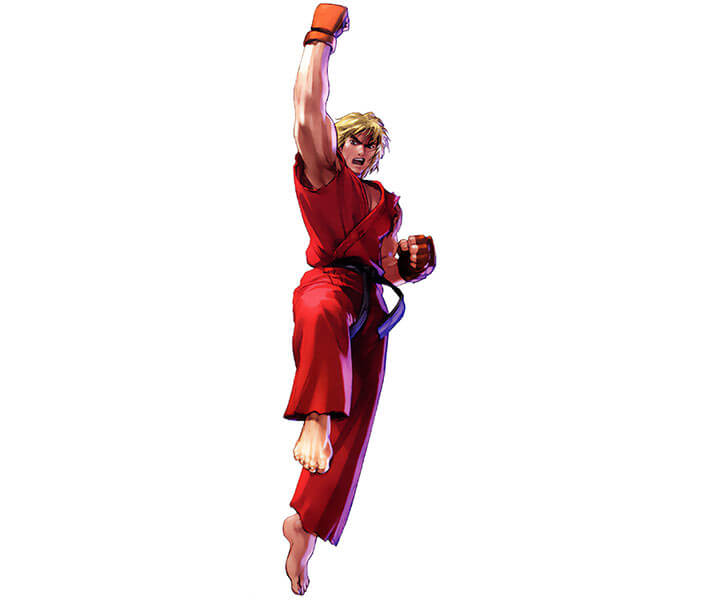 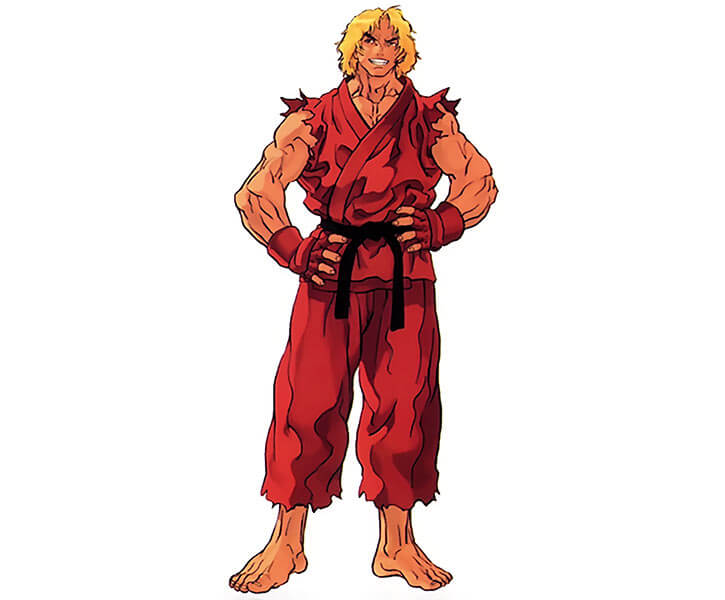