In super-hero settings that feature a dearth of super-heroic activity during the 1950s, Scott is a good choice for an heroic adventurer who held the line.

Dr. Scott is a multidisciplinary scientific and engineering genius. His accomplishments are unrevealed, but earned him worldwide acclaim.

He also appears to have considerable military skills and experience, a particularly quick mind, and nerves of steel.

Scott is blind, but his other senses are extremely keen. He can sense hot or cold objects from a good distance away, can precisely locate and identify sounds, feel distant movements through the air, etc. All in all, his condition barely seems to handicap him. He can pilot vehicles, sneak around, use weapons, etc. without missing a beat.

It is twice mentioned that Dr. Scott has a special helicopter. This is presumably a high-performance model that can be entirely flown by radar. There are also multiple assistants working with him, including his fiancée.

This is a very short story. Thus, no background is given for Dr. Scott, the “Blind Science Wizard”.

One can imagine that he was a world-renowned scientist who served in an elite military unit during World War Two (perhaps the US Army Rangers) and was blinded in battle.

Dr. Scott’s fiancée and lab assistant, Moira, is also blind. She too has super-senses partially compensating for her blindness. So one could imagine that they met after the war and she taught him how to sharpen his remaining senses to overcome his handicap.

In 1951, the world was suddenly hit by massive bombings that destroyed entire cities. Both the USA and USSR assumed the other had attacked. There thus were but hours left before a global thermonuclear war. Kevin and Moira were called to investigate one of the bombing sites.

The blind couple and their seeing-eye dog sensed a presence. They soon located two invisible intruders and their invisible spaceship. Though the dog was shot dead, Dr. Scott knocked out two Monduvian space aliens. These were part of the invisible attack fleet that had been behind the bombings.

Convincing the USA and USSR to call off nuclear retaliation strikes against each other, Scott headed an international scientific task force. The job was to reverse-engineer Monduvian invisibility and analyse their technology (and perhaps their language). Meanwhile, the invisible bombings continued.

A test was done to turn a human soldier invisible. It succeeded, but the man couldn’t see either and was accidentally killed. Since being blind was nothing new to him, Dr. Scott became the second test subject.

He then flew the captured ship up. Our hero joined the invisible alien detachment just as they were returning to Mondu.

Dr. Scott infiltrated Mondu, mapping out their key military and political installations. Once that was done he stole another warship. He used it in a high-velocity bombing run that crippled the Monduvian empire, then to return to Earth. His first priority upon his return was to marry Moira.

(This one-man global sabotage is reminiscent of the classic science-fiction novel Wasp . But it precedes it by six years. The intelligence and sabotaging action is covered in but a few panels, but one imagines that if it were fully developed it would resemble the actions of Eric F. Russell’s protagonist.)

Scott is an archetypal 1950s Scientist TV Dad. Think early Reed Richards, though without any flaw.

Or the vintage Challengers of the Unknown.

He’s a stalwart defender and scientific investigator, extremely courageous and intelligent, all these things.

If we go by the conceit that the story “Invisible Death” (Scott’s sole appearance) occurred in October 1951, I’d say that Dr. Scott’s adventure inspired Howard Stark to set up Woodrow McCord as the Earth’s defender.

Dr. Scott’s abilities were almost uniquely suited to fight the Monduvians, but not that advantageous in fighting other menaces. He and Moira probably helped Stark with the infrastructure such an effort required. Which probably evolved into S.W.O.R.D., although I don’t know if that’s been mentioned in the MU.

It’s hard to figure out Stark’s chronology, since Howard has been retconned  into the WW II era and yet is the father of a 30-ish Tony. I’d guess his partnership with McCall happened sometime between 1953 (when he had his consciousness raised by the Brotherhood of the Shield) and 1965 (when Nick Fury left the CIA to lead SHIELD).

Bonuses and Limitations:
Sonar is limited to sensing movements within a sufficiently dense atmosphere.

Drawbacks:
MPR (Dr. Scott is blind, but that impairs him very little). 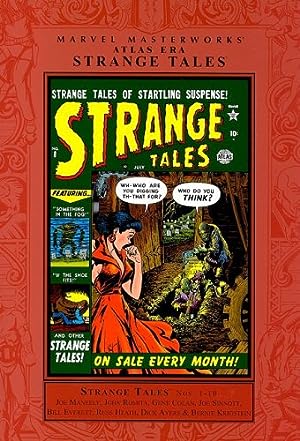 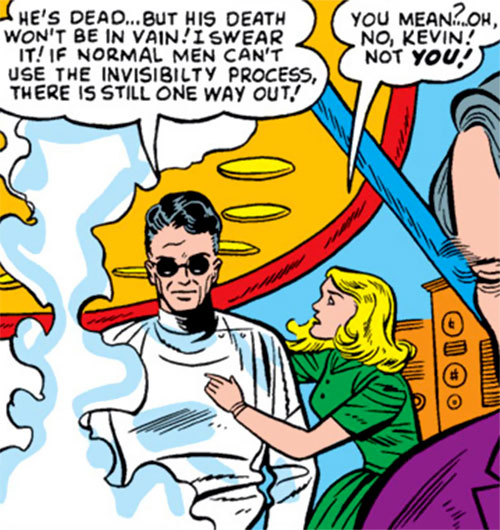