Andromeda was a 2000-2005 spaceships-and-aliens sci-fi TV series, based on unused concepts from the creator of the original Star Trek and starring the Hercules actor.

The heroic Captain Hunt is an officer from a galaxies-spanning empire. While he was in suspended animation, the empire fell into dark ages.

As he returns, Hunt struggles to help restore the old order… but his circumstances and allies are peculiar.

Dylan Hunt has the strength, speed and durability of five men. He has an enhanced metabolism and possibly also superhuman reflexes due to the genetic heritage from his mother’s side. This is not uncommon, around 92% of humanity across the universe is genetically engineered in one way or another (as mentioned in S03E20).

He is an excellent unarmed and armed combatant, particularly excelling in martial arts (and expected to, in DC Heroes RPG terms, to use Hero Points  to unlock the benefits of the Unfeterred Fist Schtick), blaster  marksmanship and force lance combat.

He’s a veteran Commonwealth officer and possesses strong diplomatic, scientific (the Highly Advanced advantage simulates his familiarity with and ease of use of all old, powerful tech that many post-apocalyptic future worlds regard as pure magic), computer and military skills. These make him a force to be reckoned with.

Hunt is also superbly intelligent and quite charismatic. He naturally is quite the tactician and leader.

He can appear exceptionally confident, decisive and forceful and can, on occasion, sway even enemies to his side, including Nietzcheans. For some reason he also speaks what appears to be the Inari language (it appears that English was spoken on Tarn-Vedra).

He alone has all the access codes to the entire ship and all its functions. For example, only he is knowledgeable about and authorized to use the override Access/Activation/Deactivation code of Lexic Dark 55278, Alpha 771. He may at times have to argue with the ship’s A.I. Rommie, but there is never any doubt of who is in command.

The Andromeda actually carries the Eureka Maru, after its boarding crew joined him, and that ship is solely commanded by Beka Valentine. Dylan Hunt, Commonwealth Captain, has the serial number: H.E. 5095C21922 (S01E15).

In the future planned by Robert Hewitt Wolfe, which never became canonical, Dylan, aided by Rommie, was supposed to lead a greatly restored Commonwealth.

It would clash against a new Nietzchean empire led by Tyr Anasazi, against the Wayist Magog united under Rev Bem and against The Consensus of Parts, an alien intelligence fused with Seamus Harper. 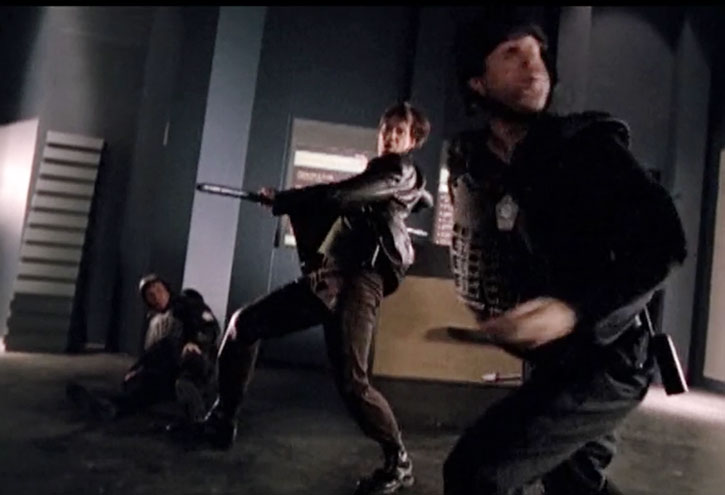 Trance Gemini was revealed to be a schemer to make it all happen and to create a perfect future as she saw it. She is a Luciferian, a member of a race with hooked tails that continuously blows up the universe. They eternally fights love, of which the Spirit in the Abyss is an aspect, and which is trying to pull the universe together again (devils and angels, if you will).

In the end, the Commonwealth would stand victorious and then unite with the Nietzcheans, the Wayist Magog and the Concensus of Parts.

The Pyrians, on the side, would be backed by the Luciferans in their fight against the Abyss, but it would not be enough. The Andromeda would therefore join in the fight against the Abyss and enter the slipstream where Beka was. As per the Luciferans original plan, they were supposed to kill the Abyss at a point where everything starts and ends using the newly recreated Engine of Creation.

However, this original plan which Trance supervised came unraveled as she started to like her fellow crewmates on the Andromeda. She could no longer force herself to manipulate them into creating the future in which the Abyss was destroyed, which would end badly for them all.

Confused, she sent her avatar through time to discuss it all through with Harper. Her goal was to arrive at a more acceptable ending, which may or may not come to pass.

In this alternate ending, Beka, about to destroy the Abyss, realizes, that if she kills the Abyss the balance between chaos and order, life and death, expansion and contraction will be broken. And if the Abyss wins everyone she knows and loves will die. Neither alternative is acceptable.

Instead, she extends herself through love and herself becomes the Abyss. At this point the war ends and they all survive in one fashion or another.

In the end, they all become great legends throughout the universe: Captain Dylan Hunt. Captain Beka Valentine. Tyr Anasazi, the Emperor of the Nietzscheans. The Reverend Behemial, Voice of the Way. Seamus Zelanzy Harper, the Soul of the Machine. Trance Gemini, Lucifer, Solar Avatar… troublemaker!

Dylan Hunt was born on Tarn-Vedra, the planetary seat of government and homebase for the Commonwealth’s military and arms depots. His mother was a genetically engineered high-gravity world shuttle pilot. His father was a Paradine, an employee of the Imperial park at the human district of Visharna-Tarn.

As such, Dylan is half-genetically enhanced Vedran, half-human. As such, he’s much stronger and durable than normal humans.

He was mentored by the legendary Admiral Stark for his service with the great Intergalactic Systems Commonwealth. He first served for two years as enlisted and then attended the High Guard Academy, graduating with honors. After a sting with the Argosy Spec-ops he either commanded or served aboard the Crimson Eclipse.

Dylan managed to stop the dictator Ferrin on the planet Mobius. He was thereafter given command of the starship Andromeda (as captain). His old partner, the Nietzchean Gaheris Rhade was made his first officer. He dated Sarah Riley for several years, and they were about to get married, when Dylan was reported lost and presumed dead at the Battle of Hephaistos.

That battle was part of a grand plan by the Nietzcheans to destroy the Commonwealth and install their own empire. Gaheris, siding with his native Nietzcheans, thus betrayed him, and Dylan was forced to kill him in self-defense.

At this point the ship got stuck near the event horizon of a black hole, thus experiencing severe time dilation. The Commonwealth was destroyed that day. A long period of decay of the empire would follow. 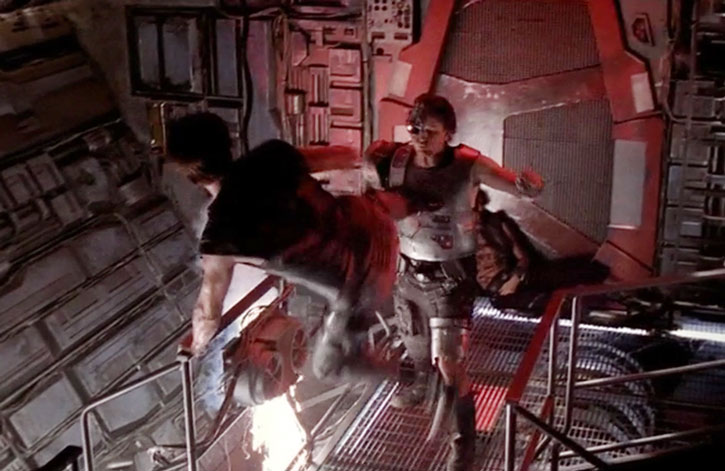 Thus, Dylan as the only crewmember got stuck in time for 303 years until a salvage operation was attempted by the Eureka Maru. Unstuck in time, Dylan Hunt managed to convince the boarding crewmembers to become his new crew on the Andromeda Ascendant. Since the old Commonwealth had fallen the day he got stuck in time, he made it his great mission to restore it!

The Nietzcheans had fallen to infighting and also failed to carve their great empire, now composing of many different fractions. An emergent threat was found with the cannibalistic and barbaric Magog.

Blast from the past

With the crew being reduced from the former 4000 down to a mere six in total he got to know each and every one of them to a great extent:

They would serve as his guides in this new time, and his mission would be his anchor in a lost existence.

Hunt faced a post-apocalyptic “dark age”. Major threats included the ever-expanding and horrible Magog (who had even for a while dominated the Earth, leading to a great downfall from grace, while he was gone), inter-dimensional aliens, Nietzcheans, and many others.

The Captain and his allies eventually managed to restore the Commonwealth into a new organization encompassing around 50 planets. This was much, much smaller than the original Commonwealth, but no small feat nevertheless.

Eventually, Tyr would also betray him, Rev Bem would ascend to humanoid form and leave them, and he would be accompanied by two new crewmembers: the Nietzchean Telemachus Rhade and Doyle, the android.

When he later learned that his father had been a Paradine, who are a human-like off-shot of the Vedrans, Dylan gained access to new abilities (not featured in this writeup).

The quest to improve the universe and conditions for living for everyone through diplomacy would ever continue!

Dylan Hunt is a male with an astonishing physique and good health. Even Nietzcheans respect him, and they never respect the inferior human race. Then again Dylan is only half-human, but few know this.

He is usually relaxed in a Commonwealth uniform, radiating a positive, confident, sympathetic and strong attitude. His voice is quite deep and commanding.

Dylan Hunt is a true idealist and a hero of old, lost times. He was taught to do good at all times, particularly when there is evil all around. While out of place at times in the future where he has landed, he nevertheless adjusts quickly to his surroundings, never being confused, afraid or unknowing for long. 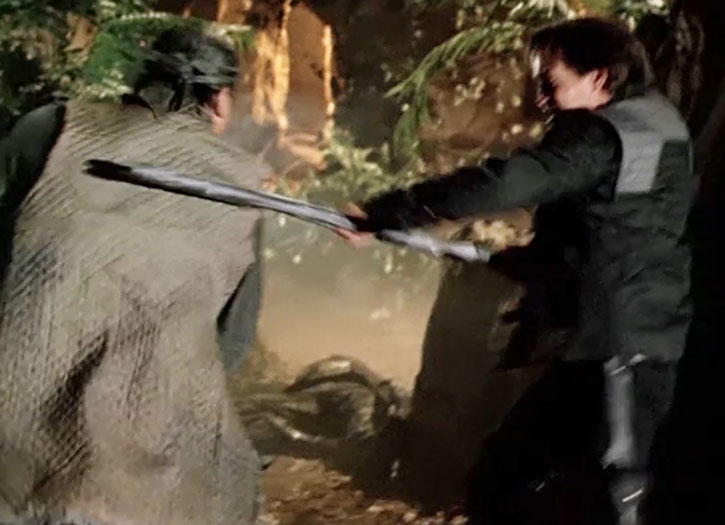 Dylan is ever the diplomat. It’s very fitting that he should be the one to restore the Commonwealth. While having quite the democratic leadership style, taking advice from fellow crewmates, he sometimes decidedly pulls ranks when the course is set.

While offered leading roles in the New Commonwealth he declined as he believes he can do most out on the frontier. He is right at that, as his adventures have proven.

When forced to kill he compromises his own principles. Therefore he often prefers to use Bashing Combat with his Martial Arts and Schtick. He often teams up with Tyr Anasazi in the field in sort of a friendly combat rivalry, but he doesn’t fully trust Tyr which is justified.

He therefore keeps the corpse of Drago Museveni locked in cargo bay. As a result, Nietzcheans don’t dare attack his ship and Tyr cannot readily betray him and leave.

In general, women like him. Sadly, he lost his great love, Sarah, in the past. He is a natural friend of Beka Valentine and he also enjoys the quirky company of Trance Gemini. Seamus Harper is regarded by him as the fun, nerdy kid on the block.

Dylan welcomed Rev Bem’s philosophical insights and pacifist agenda, despite him being a Magog. Rommie, the ship’s A.I. is one of his most valued friends and advisers. He respects the skills, dedication and abilities of Telemachus Rhade, the genetic incarnation of his former traitorous Nietzchean lieutenant. But Hunt isn’t entirely sure that he can be trusted either.

With this team, Dylan has managed to combine severely different personalities, differing agendas and people of very different backgrounds and of different skills into a superb and capable crew. These even managed to restore the Commonwealth to some degree and stand for a force of good in the universe – a true testimony to his great leadership abilities!

“The Universe is a dangerous place. But in our future, my crew and I fight to make it safe. I am Dylan Hunt, Captain of the Andromeda Ascendant, and these are our adventures.”

“The Commonwealth. Before, it was a dream. Now, it is a necessity.”

“Why does it have to be the Magog ? I hate Magog.”

“Una Salus Victus. It’s not about being invulnerable. It’s about being ready for anything.”

“Nobody points at gun at me on my ship. I call that a tactical mistake.” [beats them up]

[Planning a space battle] “This is our objective: two Pyrian dropships carrying atmosphere generators. We destroy them and the Pyrians go home. Phase one: The fighter wing will engage the torchships drawing them off. That will keep them at least one minute away from the main action. The torchships are effectively knocked out of the action. Phase two: warships from the member worlds will engage the cruise escort forcing them to reduce their cover of the dropships. Which brings us to phase three: the main element of our fleet will launch a massive attack on the dropships: dropships gone. Then we shift fire to the remaining cruiser escorts. The fighter wing falls back leaving the torch ships, which are now vulnerable to long-range missile attack. At that point we win.” 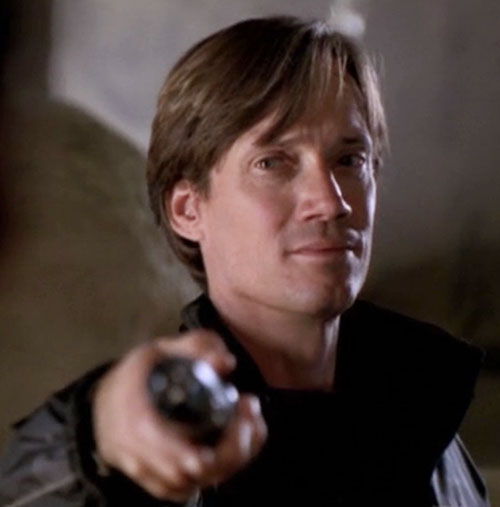 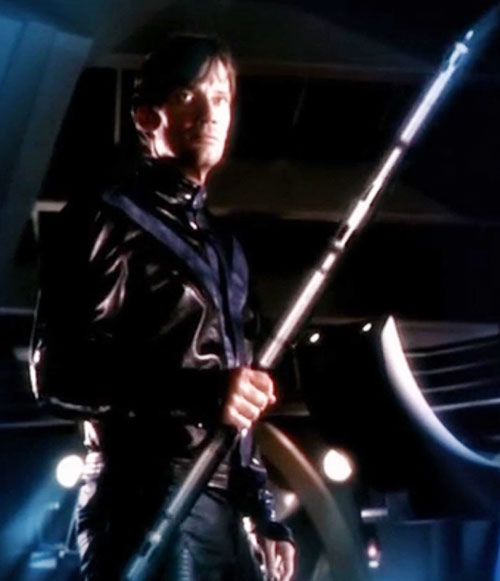 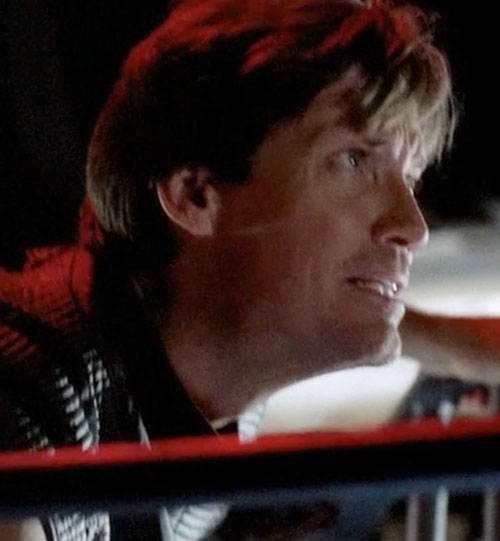