His main role is as a weapons tech expert. Like Isabel Ferguson or Kolu M’Beya, he could be quite useful as a NPC for weapons-using teams or characters.

Tefibi is an out of shape techie without much in the way of people skills. But he’s a genius in a large number of fields, mostly having to do with computers and guns.

He can handle pretty much any technical matter, but his real loves are being a computer geek and a weapon systems nerd.

His research and computer skills probably mark him among the five top hackers in the Wildstorm universe. The only thing he couldn’t penetrate was Halo Technologies, and he also had problems with Bendix’s genius-level security and encoding of his files. Everything else is easy.

He even hacked the Authority’s carrier ship, though this was only possible with ultra-powerful computers using alien tech.

Another achievement was locating the top secret meeting room used by the United Nations Special Security Council. Which allowed Santini to turn the tables on them and have them executed on the spot.

Tefibi is an Egyptian-American computer nerd – and a highly skilled one. His past is shady and not very well known, but it has been established he’s a former I.O. member trained in electronic warfare and critical systems assault. Santini almost certainly met him while they both were working for I.O..

But Tefibi’s career went very, very wrong. He was manipulated by Ivana Baiul, who under a false name told him she wanted him to run a check on computer security at the Pentagon. The assignment was to infiltrate their systems and destroy the files of clandestine, very black projects.

Tefibi did a superb job, single-handedly compromising the Pentagon’s systems to their core. He destroyed vast amounts of data, erasing several unmentionable projects. This caused much chaos in Pentagon operations, including a wargame that was being run in Germany.

Tefibi didn’t cover his tracks particularly well. He was arrested as he was writing his report on security holes at the Pentagon. When he explained the situation, it was revealed the I.O. agent he was mentioning had never existed, and he went down hard. He spend years in the particularly harash penitentiary at Pelican Bay, and emerged a changed man.

Nations of the world

Santini, however, hadn’t forgotten Tefibi. Khalid was among the first persons Santini hired for the new Stormwatch. He was the third, after Santini and Coleman, to start drawing pay and working as an UN agent. Along with Grunier and later Barak, he is at the core of the support team for Santini’s yahoos.

Tefibi was then kidnapped by Ivana Baiul’s teams, as she was now the head of a Homeland Security agency. He was swiftly declared an enemy combatant.

Baiul, however, didn’t know that her data on Barak was out of date. This Stormwatch agent was no longer a negligible level 8 telepath, but closer to level 3 or 2. The telepathic booby traps engineered by Barak in Tefibi’s mind, without Khalid’s knowledge, allowed Tefibi to escape.

After Team Achilles left the UN’s employ after the Authority’s coup d’État, Santini called in markers with a Golden Age hero, the Magneteer. The Magneteer being a legend in the techno-nerd community, Tefibi was enthusiastic about meeting a childhood hero.

He and the Magneteer got along so well that the wartime legend eventually allowed Tefibi to use his armour.

Tefibi comes across as a geek. He has no problem admitting he’s an out-of-shape nerd and a wuss, and complains about alpha males always picking on him. But this is not actually true. He’s actually a hard man, having survived years in a particularly tough penitentiary.

Although he’ll protest there’s no way he can cut it in the field, he is quite deployable in cases of emergency. His marksmanship seems excellent, and once his back is to the wall he shows an excellent level of initiative and resourcefulness. He’s a survivor, with excellent practical intelligence.

Tefibi is crazy about guns and computers. He knows the specs and trivia of pretty much any gun ever made, and he’s visibly excited when talking about weapon systems and advanced computers. Santini could persuade him to do pretty much any amount of work in return for the promise to let him play with computers based on alien technology CPUs.

He’ll lovingly explain every improvement he’s made in Team Achilles specialised gear. The soldiers have learned to be very attentive to his explanations – Tefibi’s stuff *works*.

Santini is grooming him for leadership functions. Team Achilles operatives aren’t too imaginative, and they can use Tefibi’s intellect when it comes to analyzing threats and making plans above the tactical levels. Tefibi has the smarts, depth of reasoning and creativity to become a decent officer, though it’ll take time.

As an obviously Arabic guy with an obviously Arabic name, a criminal record and being a known hacker, he is wary of the US administration. He was quite ambivalent when Santini remembered that if he claimed the team’s luggage at an airport, he’d probably get to visit Guantanamo within a few days.

His hatred of Ivana Baiul is actually at the “foaming at the mouth” level.

Being ex-I.O. he has, like all team members, a level of military discipline, address and so on.

Weiss : “Tefibi, why is it that when you speak of weapons, you sound like you are describing sex ?”
Tefibi (angry) : “Oh ha ha, very funny. Look, there’s more…”
Weiss (increasingly amused) : “What more could there be ? We already have penetration, soft tissues mushrooming, barrels which are too short and yahoos who never clean their residues…”

“Keep hitting me, bitch. I’m bored already. What do you think you can pitch me that I didn’t already catch in Pelican Bay penitentiary ? Hadn’t considered that one, had you, fuckwit ? Thought I was soft because I sit behind a desk with computers ? Fuck you *with* the horse you rode in on, jackbooted fascist !”

“I got their ass, sir. Three teleportation signatures from inside and ten more from the street.”

“This isn’t some stupid TV cop show where I can pull off a guy’s licence plate number from a blob on the screen… I can’t add resolution that isn’t there.”

(After barging in the Santinis’ room as they were having sex) “Calm down, sir. I’ve seen her naked before. On the Internet.”

Santini : “Can you hack it ?”
Tefibi : “Does a bear shit in the wood ? Of course I can hack this primitive Eastern European shit. ”

(Muttering to himself as he feels unappreciated) “Gee, thanks for disarming the armoured madman in our midst, Tefibi ! None of us could have done it because we’re too primitive to use a television remote, that’s for fucking sure. Gosh, you’re a real hero.”

“Just doing my job, sir. For God and Country and the Advancement of Science and all that great shit.” 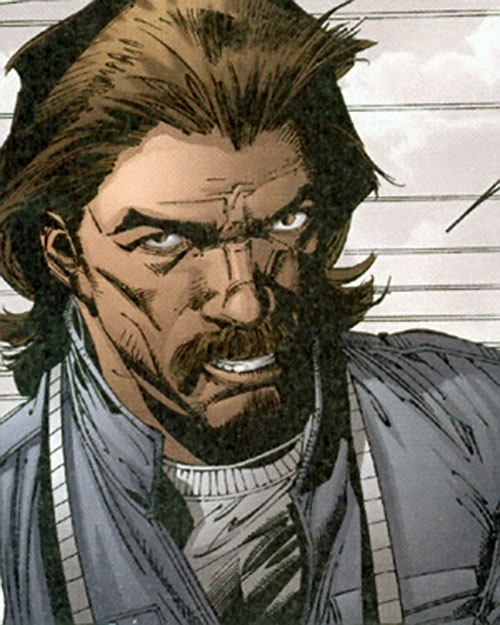