Venari is a female kavat with extraordinary levels of genetic enhancement. She is markedly larger, faster, stronger and more durable than even the augmented kavats deployed by the Tenno.

Part of this is because she is a cyborg as well. One assumes that her cybernetic reinforcements are based on warframe tech.

She has developed the “ricocheting off the walls” kavat fighting technique to the point where it’s a martial art. Venari can turn a corridor into an enemies blender, caroming off surfaces at extreme speeds and tearing through solid armour plating.

Venari can be given orders requiring a high level of tactical understanding. Such as “disarm the most dangerous enemy shooter”.

When on her own, she can also formulate strategies such as when to fall back, when to attack, how long to observe enemy forces to decide on her attack plan, etc..

Like most military kavats, Venari appears to be designed for stalk-and-destroy operations against the Infestation. She seems to consider that killing the Infested is her duty. 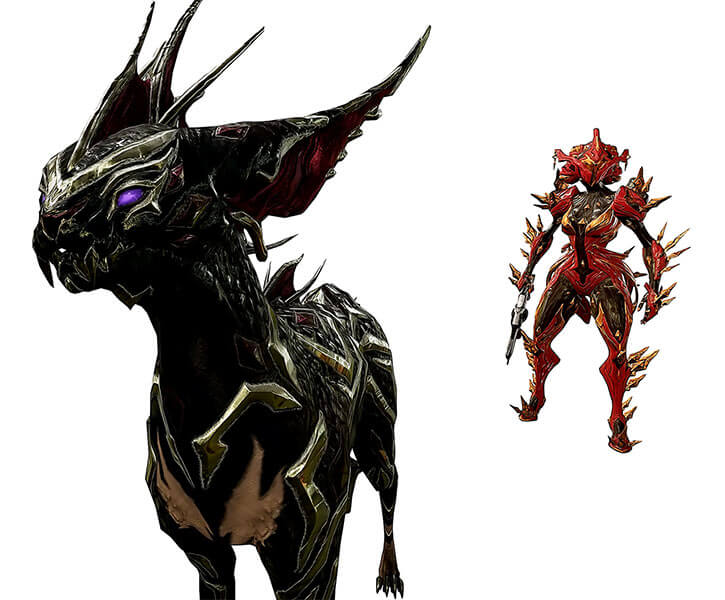 Venari’s level of intelligence and agency is clearly abnormal. She seems to have human-level smarts.

Whereas a house cat can understand how a door handle works by watching humans, Venari can deduce what the buttons on a control panel do by looking at it being operated. She’ll even recognise if such a panel is similar to others she’s previously seen.

She could also deduce that a man she was observing was a physician. *And* she understood that such a person could create a clone of a person given access to sufficient DNA samples.

It also seems likely that she can understand language, to an unclear extent. She can nod “yes” or “no” with her head.

Corpus soldiers even hypothesised that Venari had a rough idea of how much ammunition their guns had. And would time her attacks based on them having to reload.

This kavat also seems knowledgeable about security systems. She can assess sensor grids, laser barriers, alarms, etc. and devise her own strategies to evade them.

Even on her own, Venari is thus a competent assassin. And spy and/or saboteur, if equipped with a camera or droppable explosive charges.

There are references to Khora being one warframe with two bodies. It could be poetic exaggeration.

But it also seems possible that Khora’s intelligence is shared between Khora and Venari, using a process similar to Infestation hive minds. This is an Occcam-legalA logic rule about favouring the explanation involving the fewest entities guess explaining why Venari has such extraordinary skills and smarts.

In this hypothesis, as long as at least one of the two is up, Venari has the full Khora intelligence. And Khora has additional resources from the feline’s mind. Such as killing instincts, and methods to knock objects off furniture. 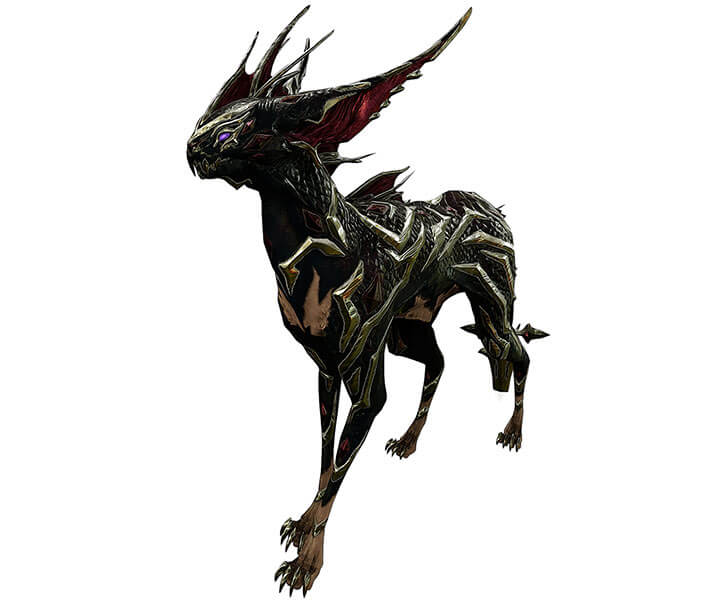 Khora’s chain appears to be telekinetically animated. However, this could be approximated through other means. Say, multiple kinds of memory metal fibres cybernetically activated through electrical pulses.

It is normally kept spooled on her person so it doesn’t appear as long as it actually is.

The usual applications are :

This is a particularly long and devastating melee weapon. The tip can also be cracked to emit a powerful sonic boom.

The effects of the boom seem way larger and more devastating than they should be. One hypothesis is that the tip of the whip temporarily unravels as a large array of monofilaments, which randomly flail across the volume of the “boom”. Thus shredding everything over several metres.

Khora separates a length of chain from the rest, and hurls it at an opponent to entangle them.

This length of chain remains animated. Strands will animate as pitons embedding into nearby surfaces to anchor the tangled target. Other strands will shoot out to grab nearby targets, dragging them closer to entangle them as well.

Khora can also unspool most of her chain to form a short-term structure of murder. Lengths of chain become rigid to form a dome – think of the armature of a hothouse, or the edges on the top half of a 20-sided die.

From this structure lengths of animated chains will shoot to grab nearby enemies and hoist them up to one of the dome’s vertices. Targets that are thus held are strangled, clawed and impaled by the barbed chains.

On a Khora warframe optimised for this charming attack, the murder dome can hold for 30-ish seconds. And it will have about the volume of a two-stories bungalow.

Khora usually separates some of her chain to arm Venari with. These animate as Venari attacks, entangling the kavat’s target so she can butcher them.

Once Venari has killed her target, the chains will animate again to return on Venari in their readied position.

Khora is a fast, robust fighter who can be configured for multiple roles. Three typical details would be :

Since most attacks by Khora and Venari rely on shredding their target to gory bits, she’s less strong against heavily armoured targets. Such as Grineer support infantry or Corpus heavy robots. But this can be remedied by her selection of weaponry. 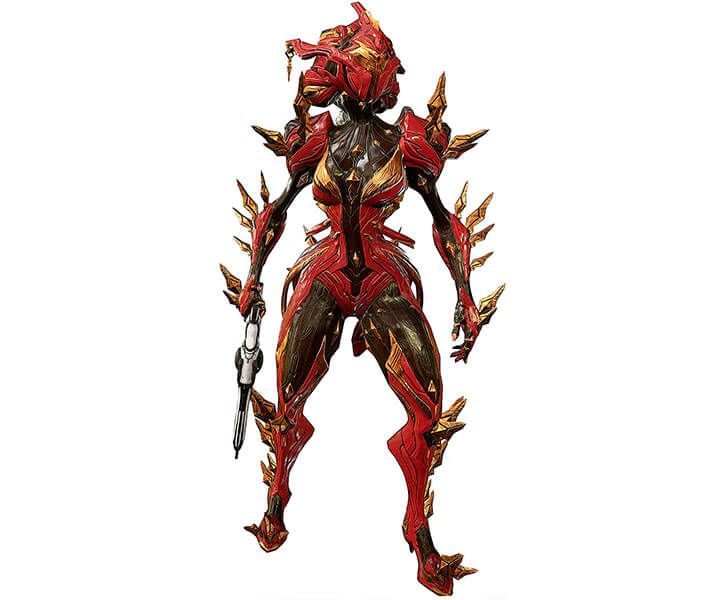 Venari was found frozen within a Venusian environmental control station. She was intact, but her warframe companion had been terribly damaged. Presumably, the pair had been taken down during the Old War.

What happened is unrevealed. It seems possible that Khora and Venari fell as they were preventing Sentient or Infestation attackers from wrecking the terraforming systems that made Venus (somewhat) habitable back then. See the Eudico character profile for more about those.

Venari was found centuries later by Sigor Savah, a Corpus agent. He thawed the apparent corpse, in order to make clones of it that he could sell for a gargantuan amount of money.

However, Venari pulled a Captain America (Steve Rogers) on him. She willed herself back to life as she thawed, and rebooted her cybernetics.

Savah kept Venari in a cage. Meanwhile, his Corpus task force turned their attention toward Infestation sites on Venus.

The cat’s out of the bag

Soon, Venari escaped from her cage, made her way to the Infestation sites the Corpus had been discussing, and hunted them down.

She destroyed several hives, whilst fending off Corpus troops trying to take her down.

When Savah came to investigate, Venari came to him to treat her battle wounds. She had correctly inferred that Savah wouldn’t betray her, as he had gone out of his way not to harm her after she had awoken.

Once she was satisfied that Savah could be relied on, Venari returned with the largest remnant of the Khora warframe. It was her fossilised hand, still in its gauntlet.

Sigor Savah studied the hand. He deduced that the kavat wanted him to grow a clone of her warframe from the remains, which seemed technically feasible.

However, the Corpus decided to bomb the Infestation hives, as they had only meant casualties and little profit. This would mean destroying Venari as well in the blast.

Savah attempted to stop his colleagues, even threatening them with a small bomb. But he was easily taken down.

To his amazement, Venari came in. The kavat located Savah, defeated the base’s sensors, sneaked right up to his cell, killed the man about to execute her ally, and exfiltrated him. She then attempted to take him (and Khora’s hand) off-planet.

Though they ended up trapped and surrounded, Venari shoved Savah into an automated cargo shuttle. She then started the launch procedure, and stayed behind to prevent Corpus forces from stopping the shuttle. 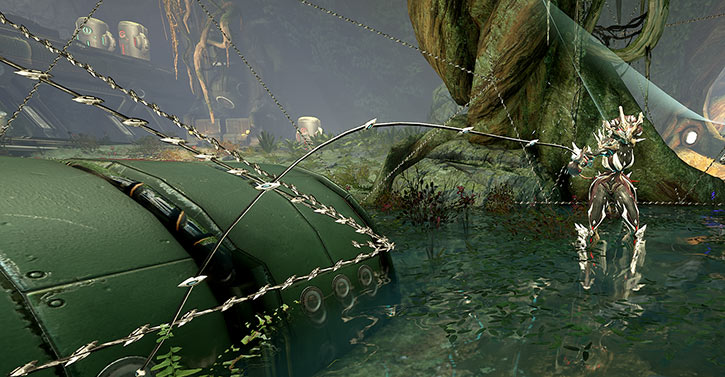 Whipclaw strike just before the boom.

Return of the huntress

He had pieced together that these relics had been found and stolen while he was busy thawing Venari. However, betrayals and murders had ensued to avoid sharing the fortune they were worth.

Savah did a decent job of it, from his base on Earth. He had become a friend to the Ostron tribe there, helping them with his scientific skills. However, he was eventually slain whilst researching Grineer ghouls technology.

The artificial intelligence Cephalon Simaris ended up acquiring much of Savah’s work. When The Lotus learned of this, she negotiated access. A deal was made, with Simaris doling out Khora data as the Tenno helped him with his strange “research”.

(Out-of-universe, one gets the impression that Khora was initially meant to be found as part of a Plains of Eidolon quest line. And that it didn’t work out in time.)

Eventually, The Lotus had enough specs to finish Savah’s and Venari’s work. The Tenno now could manufacture clones of Khora and Venari, plus their associated warframe tech.

Large strangledome in an Earth forest. 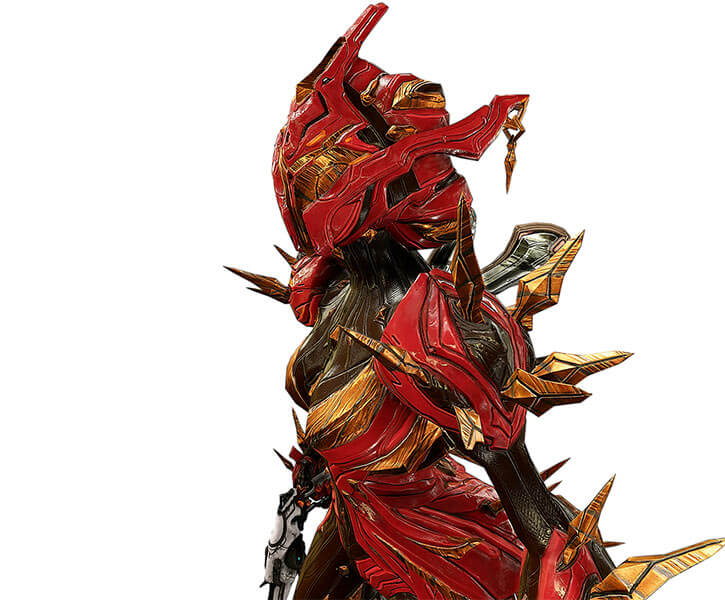 The Hidden Messages quest in the game implies that it as a shorter range than most Transference functions, but there’s no other context. Maybe 100M kilometers (41 APs) – it’s a round, reasonable number.

The Personality Transfer isn’t demonstrated. It’s a bit of flourish based on one possible interpretation of the lore.

The assumed build is a high-Range one with Zenurik focus for energy, with a DPS-centric Venari. I’ve dropped Venari’s healing role, since the video game logicStuff that only makes sense within a video game is too far out.