The 2008 Marvel Atlas locates Bey’s country, Halwan, in Northern Africa. This version has it nested between Southern Algeria and Southern Libya, with its own Southern border running along Niger’s Northern border.

However, when reading the stories during the 1970s I came away with the strong impression that Halwan was meant to have a culture, language, etc. evoking Turkey. Which is about 2,000 miles away.

This writeup assumes that Halwan is a Turk country. Perhaps a tiny monarchy occupying space that would be along the Turkish/Syrian border in the real world. If you prefer to depict it as the Saharan country presented in the Marvel Atlas, simply change Khumbala Bey’s native language to an Halwani form of Arabic.

“Khumbala the mountain” is an excellent martial artist and wrestler. He’s huge, and immensely strong and durable. He often boasts that no man ever broke his grip.

Khumbala Bey serves the royalty of Halwan, whose Throne of Lions is said to have endured for a thousand years. He’s the King’s bodyguard. However, he also has a reputation for killing men who have offended him under the pretence of sparring.

In 1975, the exiled K’un-Lun sorcerer Master Khan attempted to publicly and spectacularly murder Princess Azir of Halwan. To this end he had his men steal the Monstroid robot from S.H.I.E.L.D., then unleash it on the Princess as she was attending a softball game in New York City.

Khumbala Bey wasn’t present at the game – which presumably saved his life. The robot was destroyed by Iron Fist (Daniel Rand-K’ai).

At the Halawani embassy, Khumbala Bey challenged Iron Fist to a “friendly” bout of wrestling. Feeling humiliated that a foreigner had saved the Princess, Bey intended to kill Rand. The fight was interrupted by the Princess, who considered having Bey gutted for daring to fight her rescuer. But she did not give the order since they were in the US.

Return of the mountain

Bey left the employ of the monarchy. Presumably, the Princess fired him.

He somehow came to work for Master Khan, at his Halwani fortress of Jera’ad al-Din. In 1976, Iron Fist invaded the fortress to recover his friend Colleen Wing, who had been kidnapped by Master Khan’s men.

Khumbala Bey engaged Daniel Rand-K’ai in unarmed combat to have his revenge. But the young dragon made short work of him.

A cruel killer and bully, and a xenophobe to boot.

He’s utterly convinced he’s a fantastic fighter that cannot be defeated by any man, and boasts about this a lot.

Bonuses and Limitations:
Density Increase is Always On, Form Function, and Already Factored In. 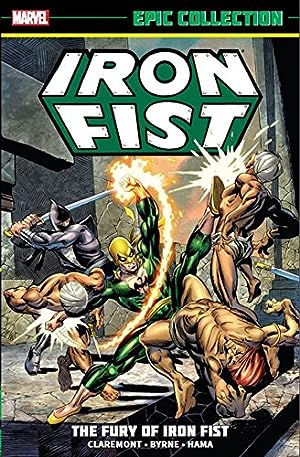