Mark has the strength and ability of a regular man with his size and build. All of his powers come from the high-tech containment suit that all humans need to wear in order to survive in the far future.

Things were going to hell in the far flung future. It looked as though the world was going to come to an end. So Mark Osborn defied the law and sent himself back in time on a one way trip to his favorite era – the 1970s.

Unfortunately for Mark, the time machine’s digital readout had a couple of burned out lights. He ended up arriving in the 1990s instead.

Upon arriving in our era, Mark helped Kill-Cat battle the super-criminal Cement Man. Kill-Cat through that he would make a suitable crime-fighting partner. Taking the name Kid Avenger, the two became the Deadly Duo.

They fought crime in Detroit for a couple of years. But Kill-Cat inadvertently destroyed the city during a Martian attack. The two relocated to Chicago, Illinois.

The Kid Avenger was later recruited by the Dragon to join the government team : Special Operations Strikeforce (S.O.S.). As of this writing he lives in their headquarters, Complex 1, in Washington D.C.

There’s only one ethnicity in the far future. Mark’s skin is naturally golden brown.

The parallel with the Chicago Underworld depicted in Hawkman should be obvious, and the Freak Force program would be quite logical. 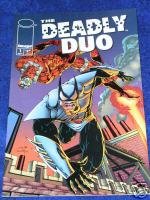