The Elite Agents of S.H.I.E.L.D. were apparently an attempt at creating a backup feature. It fizzled after one appearance, in 2000.

However, they could be useful in many campaigns. Or perhaps used as Player Characters  in a S.H.I.E.L.D. campaign.

The Kid is a swashbuckling gunfighter with great marksmanship and acrobatic ability. He packs customised pistols. These presumably fire caseless ammunition so he won’t be hit by his own hot brass if he fires whilst doing somersaults.

The Kid loves doing trick shots. In fact he seems to much prefer taking out opponents via trick shots than just shooting them full of lead. For instance, his first reflex when faced with armed opponents seems to shoot the weapons out of their hands.

The Kid is always in motion, and goes through a lot of ammunition per fight.

In the first, they were sent to recover a stolen, advanced S.H.I.E.L.D. flying car. It had been captured by Hydra forces. The window of opportunity being very short and Hydra forces being numerous and well-armed, Carter chose a small, very fast force. This way the team could board the prototype car and fly away before the opposition could react.

Though Dum-Dum Dugan was concerned that the Elite Agents might be too green and need some more tests of their non-regulation equipment, they performed perfectly.

(Though the Elite agents presumably never learned it, one of the reasons Carter wanted to recover the vehicle was to destroy the CD in the recorder. It held extensive footage of Carter and Captain America making love in the back of the car. A security camera that been unwittingly left on.) 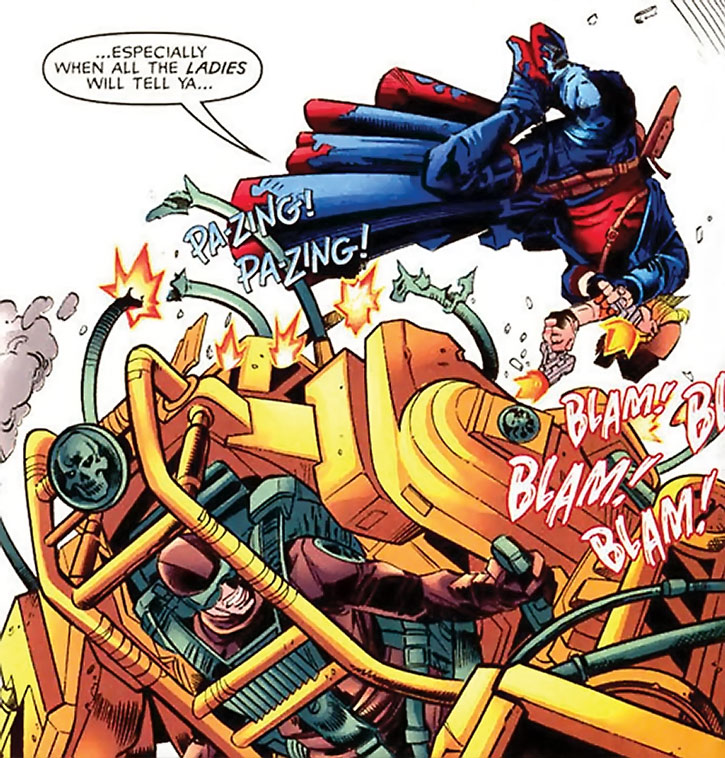 Though the Elite agents were obviously outmatched, Dugan correctly estimated that they wouldn’t be met by deadly force. Thus, he sent them after the dispersing ’Bolts to do what they could. Though, remarkably enough, some Elite Agents came close to capturing their quarries, they ultimately returned unharmed but empty-handed.

A Bon Jovi-style cowboy with S.H.I.E.L.D. gear and a distinct Kid Rock-around-1999 vibe.

The Kid is a huge egotist. He’s always talking about himself and presenting himself as a sensible, fragile lover. He normally goes for the flashy approach, the trick shots and the rep-boosting.

“All the ladies will tell ya – the Kid has a gentle touch.”

Drawbacks:
MIA toward cockiness and talking about himself.

When doing a Trick Shot use his Accuracy Skill as the base AV, and apply any modifiers (such as the difficulty of the Trick Shot). 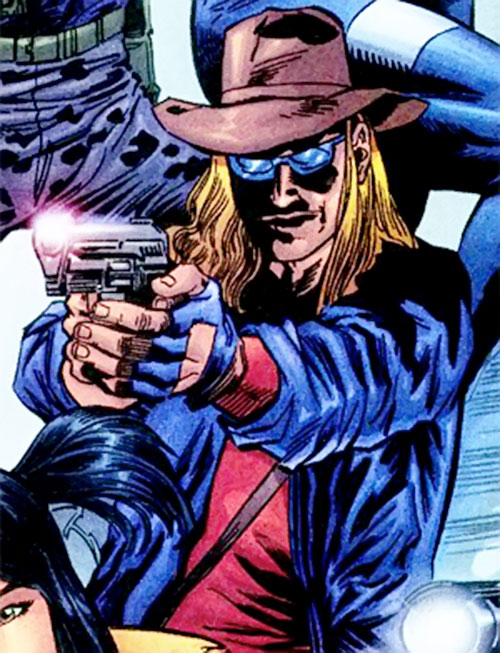