Kid Thor is a capable and experienced melee combatant. He is most effective while wielding his enchanted hammer in battle.

The current theory postulates that since Kid has yet to produce a viable offspring that could inherit the hammer, the weapon itself maintains his life force until one has been born.

Kid Thor was murdered by a mad god. The process left Kid’s body a rotting, desiccated corpse. Only constant contact with his enchanted hammer keeps Kid alive. While in contact with the hammer, his soul is anchored to his mortal form which is magically animated and for all appearances normal and robust.

Should he ever become separated from the hammer though, he will instantly die once more and return to his formerly desiccated state. Renewed contact with the hammer will return him to life again.

At some point during the Viking Age, a young Scandinavian blacksmith honed his skills to an amazing level. He became a celebrity amongst his own people, then gained the attention of the gods themselves. 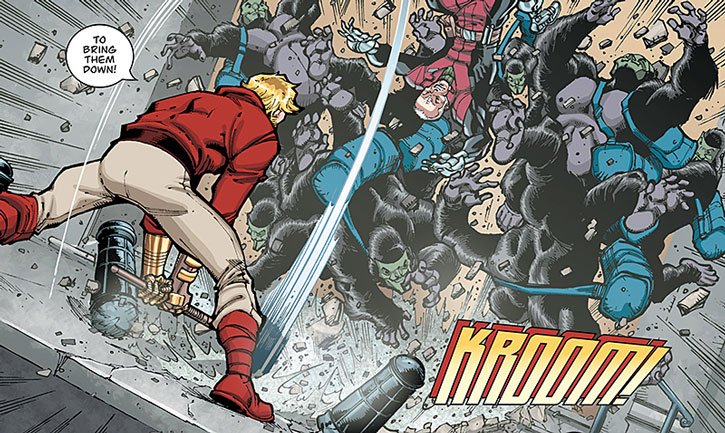 Thor, the God of Thunder, bade the blacksmith to forge him a replacement hammer when he lost Mjolnir to one of Loki’s schemes. Honoured (and most likely a little afraid), the blacksmith worked tirelessly night and day, until he had created a weapon worthy of the gods.

Thor was well impressed by the hammer that the blacksmith created. He wielded it in battle for the time that Mjolnir was lost to him. And before he returned it (after reclaiming Mjolnir) Thor had the weapon imbued with a divine might that only manifested itself when wielded by a member of the blacksmith’s bloodline.

As time passed, the blacksmith eventually had a son to whom he gave the hammer. His son did the same for his own son, and thus a long line of hammer wielding warriors was born. As the centuries passed, the warriors’ motivations became more and more altruistic. The hammer finally landed in the hands of the young man who is only known as Kid Thor.

Kid was the son of the former hero, Thor Man, who had operated out of Atlanta during the 1940s. Kid was thrilled to receive not only the hammer, but the responsibility that went along with it. He initially fought crime independently on the very same ground his father fought upon. But when the pair eventually hit financial troubles, Kid decided to take a position with Capes Inc.

Capes Incorporated was (and continues to be) an organization that provides its clients with superhuman services, security and protection from any danger that may threaten them. One of its largest clients was the US government.

Kid enjoyed a brief stint with Capes Inc.. That’s where met two of the most influential individuals in his life while working there. The first was the veteran hero Bolt, who ended up being his tutor and his partner. The other became his long-time girl-friend and eventual fiancée; her name was Knockout.

When Earth was ravaged by a group of Invincible doppelgängers from an alternate dimension, Kid Thor (along with other members of Capes Inc.) answered the call of battle. He did his best to defeat the extra-dimensional duplicates. Unfortunately, like the majority of Earth’s heroes, Kid found himself helpless before the awesome might of the extra dimensional Viltrumite youths.

When the war was eventually ended (by the “real” Invincible and Angstrom Levy), the Guardians of the Globe were decimated once more. The Guardians decided to expand their roster and include various other international heroes. During this time, Kid was recruited along with Knockout to help fill out their ranks.

Kid took his position as a Guardian very seriously. He often found himself embroiled in battles with enemies that were much more powerful than he himself would ever be. Despite this, he put his faith in his teammates and his mighty hammer and acquitted himself well in battle after battle.

Kid finally fell when he challenged the mad god Thoth to single combat. Thoth had very nearly slaughtered the entire population of Mumbai, India. Kid was so enraged at the carnage, he could no longer hold back and attacked Thoth by himself. Thoth easily overpowered Kid. The mad god drained the soul from his very body leaving him a desiccated corpse.

Kid’s remains were eventually returned to the Guardian’s headquarters in Utah, where Knockout was given a chance to say her final goodbyes. She entered the room where his body was being kept, carrying his hammer which he had dropped while fighting Thoth.

She couldn’t think of a better place for the hammer to be kept than with its master, and with that final thought laid it across his chest.

The very instant the hammer touched Kid’s corpse, it lit up with an internal fire and hummed loudly. In a flash of light and sound, Kid arose from the table he was laid upon, clutching his hammer confusedly and wondering what had happened.

It took the Guardians only a short period of time to realize that the hammer itself was reanimating Kid. Should he ever be separated from it, he would return to his state of endless sleep. Robot created a gloved harness for Kid to wear which would ensure he and the hammer would not be separated again.

With that, Kid returned to life as a Guardian. Knockout proposed to him on the spur of the moment, but the two were called to battle before he could respond. Presumably though, he accepted thereafter.

Kid’s appearance has changed very slightly since his first appearance. He is tall and well built, and moves and stands with a confidence that could only be born of a man that knows how to handle himself.

He has an unruly mop of blond hair that sits on the top of his head, and bright blue eyes that project a sense of earnestness to any that look at them. As he has aged, he has grown out his sideburns into a full on beard.

Kid’s costume is a simple one. He wears a pair of beige pants and brown boots on his lower torso, and he covers his chest with a simple brown bomber jacket.

Of course, the thing that truly makes him stand out is the massive (at least 15 pound) war hammer that he wields at all times. The hammer can always be found either at his side, slung casually over his shoulder or wielded in a two handed grip when he expects trouble.

(I still think that early on he looked like Rob Liefeld — ed.).

Kid’s personality is simple and uncomplicated. He’s a hero, he will always try to do the right thing and is seemingly fearless in battle. He deeply loves his girl-friend (fiancée) Knockout, and loves being a Guardian of the Globe nearly as much.

Upon his resurrection, Kid Thor has intimated that he hears the “call of battle” and is unable to refuse its song. It is quite possible that the magical nature of his return to life has infused him with something of the “Viking spirit” spirit of his ancestors.

The Elephant: “The hell ? You’re supposed to be Guarding the Globe, not Baltimore.”
Kid Thor: “Last time I checked, Baltimore was on the map, dumb ass.”

(Confronting Thoth)
Kid Thor: “You goddamn animal !”
Robot: “Kid Thor, wait !”
Kid Thor: “Forget that. These bastards will keep filling up graves faster than we can dig them. I’m going to end this now !”

“I hear the Call of Battle beloved. You can answer it with me… or stand aside.”

“Kid Thor doesn’t have to strike them — to bring them down !”

Bonuses and Limitations:
Self-Link (Animate Dead) has no Time Limit (+1FC), and fully returns Kid Thor to the state he had in life (i.e. no reduction of DEX, full mental and mystical attributes, and personality, etc) (+20BC). 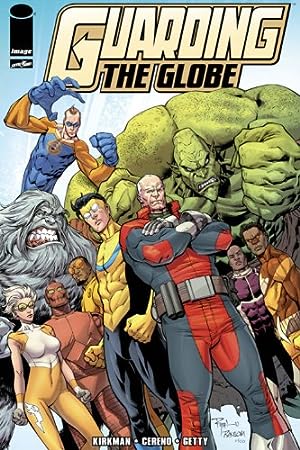 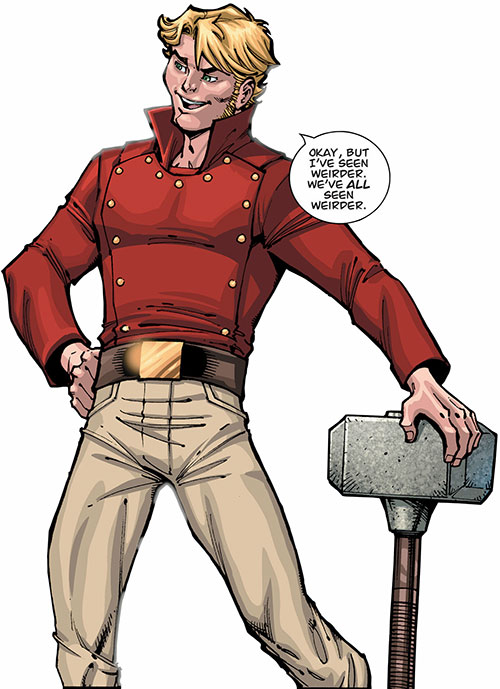 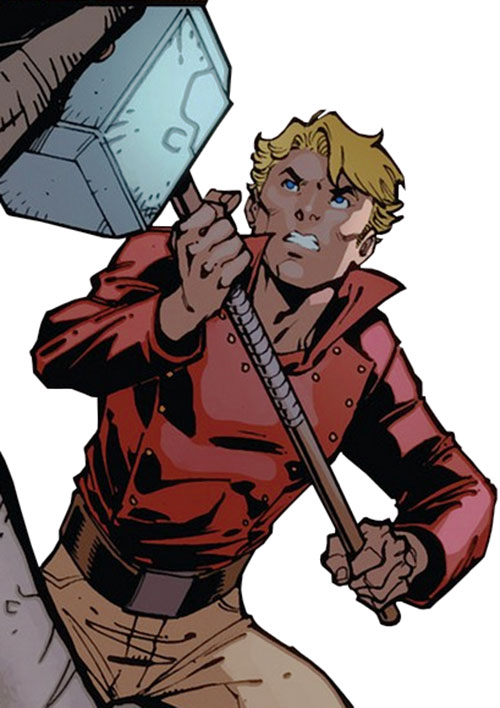 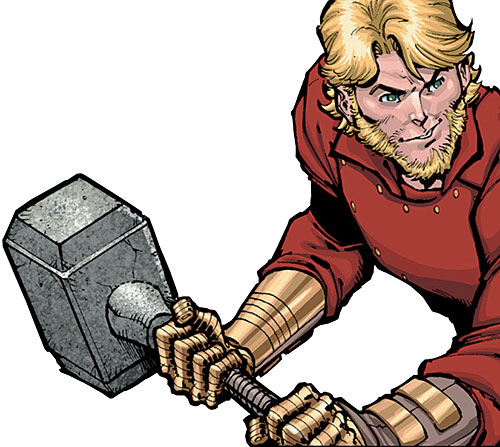 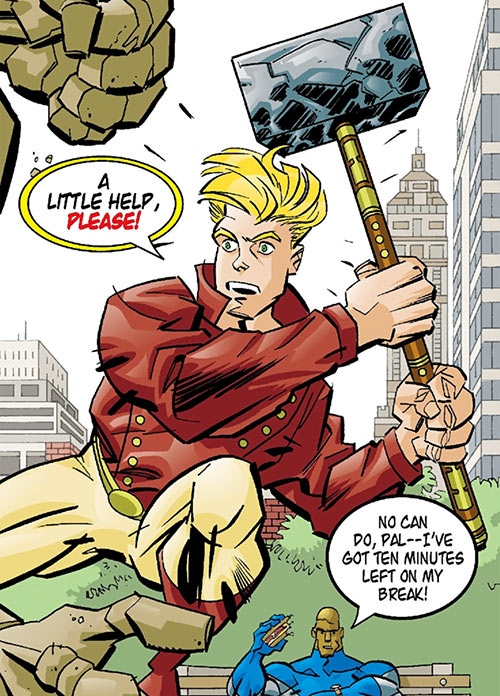 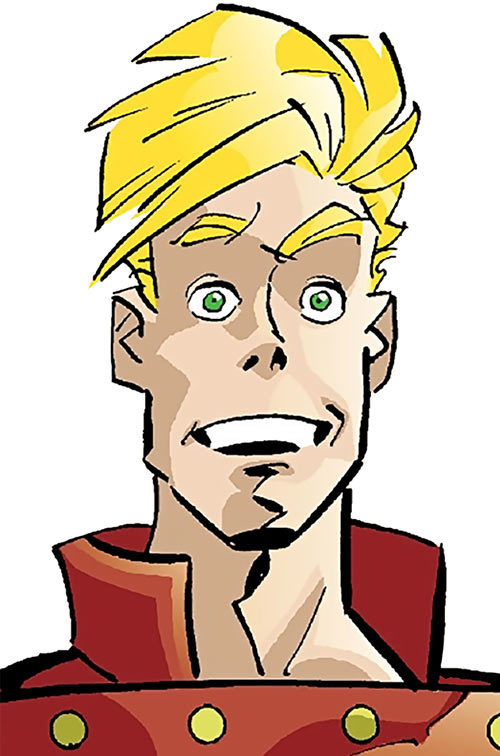