Killer Moth is a late Golden AgeSuper-hero comics from the late 1930s to the early 1950s Batman villain. He appeared in 1951.

Though he did have an elusive je ne sais quoiSomething subtle you can’t describe using words, it was faint indeed. He never caught on.

Yet he kept returning in minor, scattered roles over the decades. During that span he was redefined as a jobberWrestling slang for a wrestler who almost always loses by his part in Batgirl (Barbara Gordon)’s origin.

There are many versions of Killer Moth in DC books. Our profiles are best read in order :

Earth-1 Killer Moth had little continuity, being whatever the story needed him to be. As usual, we’ll make it seem more coherent than it actually was. 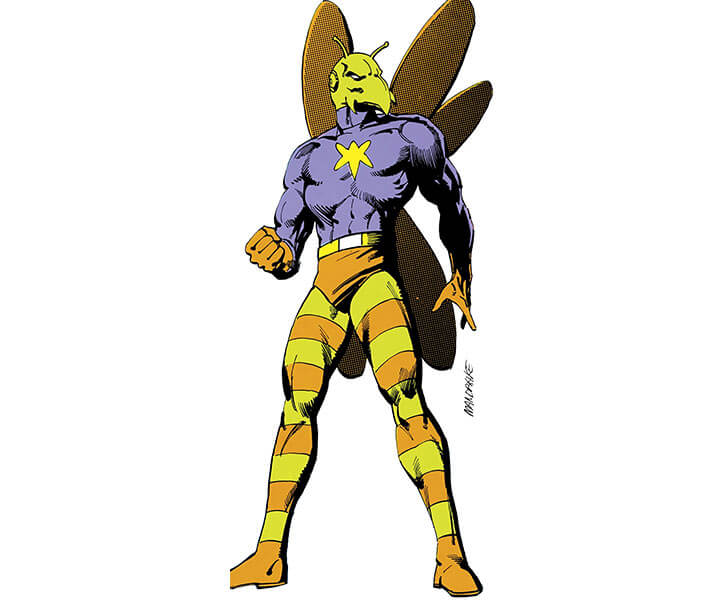 Killer Moth is a competent :

Nevertheless, he’s out of his depth against the likes of Batgirl.

He seems to also be a decent technologist and gadgeteerTechnnologist who builds comic book devices like those Batman uses – but will often need specialists to perfect his Gadgets. He usually kills such persons when they’re done, presumably to protect his secrets.

This matches his observed appearances, but it’s an hypothetical. No such thing is mentioned by captions or characters.

During the second phase we can observe that : 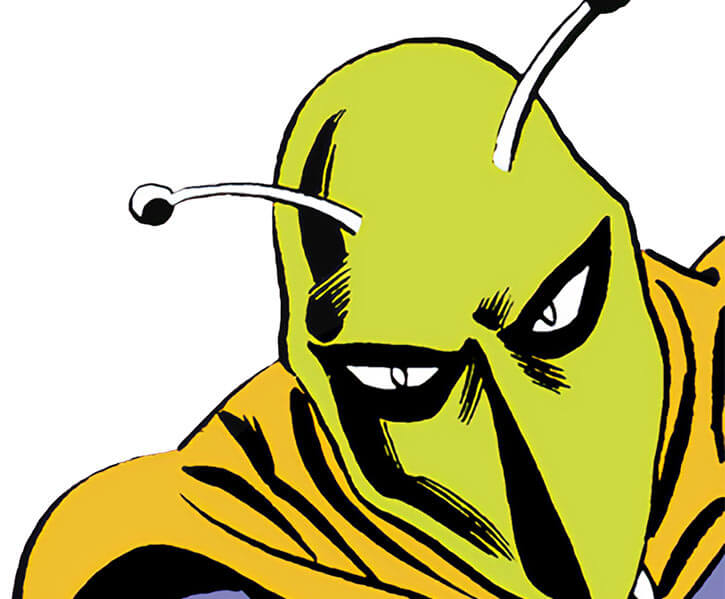 There have been multiple depictions of Moth’s ability to soar.

The Killer Moth’s main, signature weapon is his cocoon pistol.

It can shoot several kinds of adhesive fibres :

This ensnaring effect has been powerful enough to stop and hold large cars. Though at that point two henchmen were also firing their own cocoon guns at the limousine.

Other abilities demonstrated by Killer Moth have been one-shot affairs :

He generally seemed wealthy, easily financing his gear and adventures. 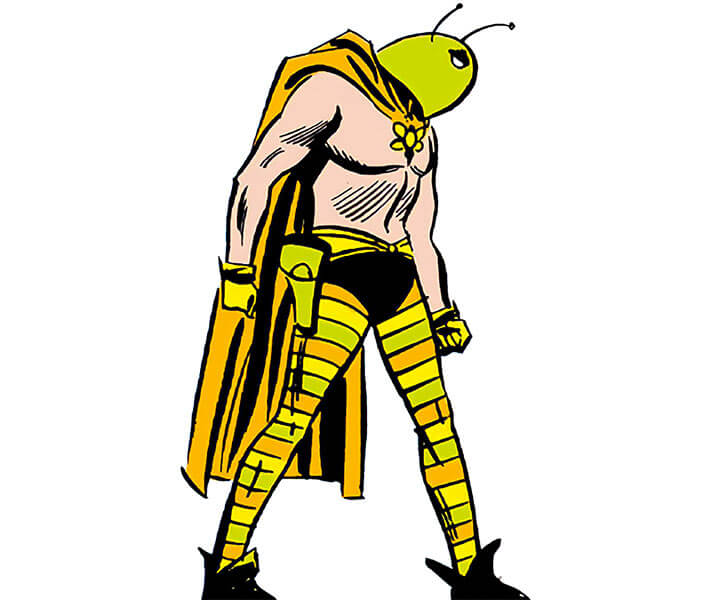 Let’s have something from 1965, for a chronologically correct matching Earth 1’s Killer Moth debut.

Being a Motown sort of bloke, I’ll dodge typical markers such as Elvis or the Beatles and go with Martha and the Vandellas. It was a fairly typical Motown girl group from this era, with a solid string of hits during the mid-1960s.

The sound from this TV show performance is a bit scratchy, but “Nowhere to run” is a classic.

However, we are told that he has already clashed with Batman, presumably several times. And is an ally of the Cavalier (Mortimer Drake).

His name is apparently Cameron van Cleer. But this gets reported both as his actual name and as an alias.

From one caption, we know that he’s a millionaire who decided to become a costumed criminal. He seems to be chiefly looking for thrills and danger.

The Moth is first mentioned in a strange 1965 caper of the Justice League of America.

His eerie costume gets animated by the Demons Three — Abnegazar, Rath and Ghast — along with those of other JLA enemies. But this roster was odd.

This Killer Moth was not similar to Earth-2 Killer Moth. And the previous cases that pitted him against Batman weren’t documented. 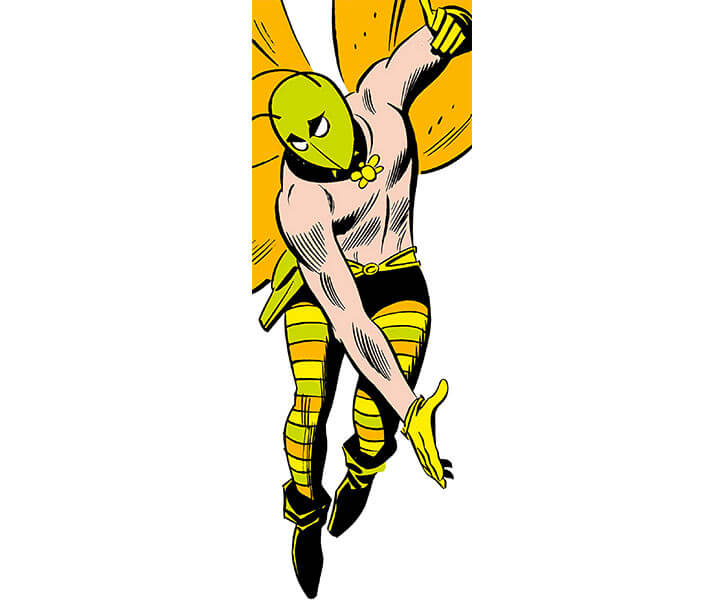 It’s all about the Batgirl

Earth-1 Killer Moth’s key story was his role in the 1967 debut of Batgirl (Barbara Gordon).

Killer Moth and his moth mob were about to kidnap Bruce Wayne. Ms. Gordon stumbled upon them as she was driving to a costume ball in a home-made “Batgirl” costume.

She fought the crooks off until Batman intervened. The Moth then fled and his men were arrested.

Mr. Wayne was but one of the Gotham City millionaires whom Moth and his gang were stalking. This prompted Gordon to become a vigilante as Batgirl. She eventually captured Moth with the help of Batman and Robin (Richard Grayson).

Batgirl later arrested the Cavalier during a jewellery heist.

Killer Moth having gotten out of prison, he busted his ally the Cavalier out of jail, using illusions. These mirages were created by machines used either by Killer Moth or by the Cavalier – it’s unclear.

The pair attempted to steal no less than the USS Constitution. But they were stopped by Batgirl and the otherwise retired Batwoman (Kathy Kane).

Killer Moth and the Cavalier soon returned. They had a plan to trick Robin or Batgirl into revealing the location of the Batcave.

To attract Batgirl’s attention, Killer Moth went on a spree of minor heists in Washington, D.C.. That was where the Dominoed Daredoll was then based.

(Yes, Batgirl was occasionally called that in captions. Super-duper.)

Van Cleer then set up a number of traps from which she could easily escape. These setups fed Batgirl information about a master plan to kill Batman, so she would warn him.

However Batgirl immediately understood that she was being manipulated. She handily turned the tables against Killer Moth. 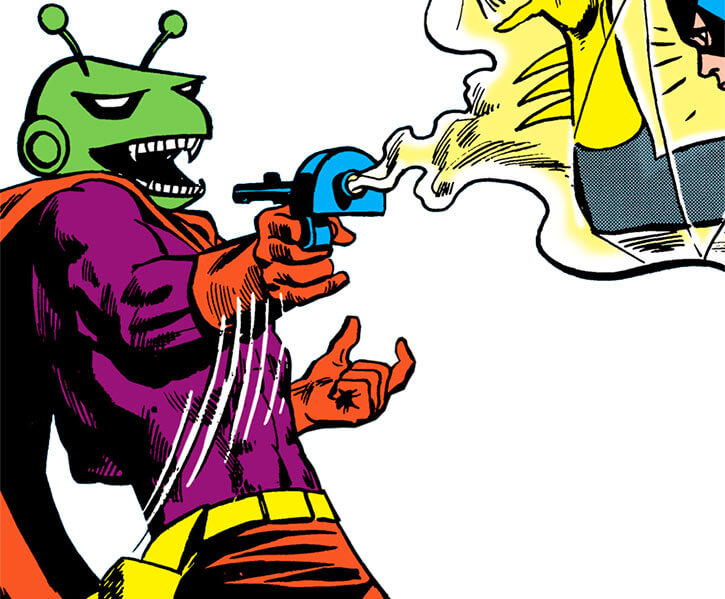 The “Moth as the anti-Batman” motif resurfaces

During the late 1970s, Earth-1 Killer Moth ran a scheme similar to that of the Earth-2 Killer Moth.

He was a sort of anti-Batman. Criminals could call him in to fight costumed vigilantes – costing them half the revenue from their crime. It’s not clear whether it was a new development, or something he’d always done off-panelNot directly shown in the comic. Off-screen..

As a gangland protector, Killer Moth built radio emitters that could be worked into specially prepared shoes. These bugs were undetectable, but the wearer could broadcast a distress signal to summon Killer Moth.

Moth hired an electronics expert and a shoemaker to help him perfect his technology. He murdered them both once they were done.

Tricked-out shoes were then offered to prospective clients as part of the protection package.

Clients included the Bolton gang. They twice summoned Moth to defend them against Batgirl. But Batgirl’s skills had been growing quickly, and Killer Moth was increasingly out of his depth.

She defeated him at the Jefferson Memorial  , but he escaped.

During their next confrontation he stunned her, then escaped with the two Bolton gang members Batgirl had captured. But she recovered in time to lasso both men out of the Mothmobile as it was driving away.

After the son of the murdered shoemaker contacted her, Batgirl deduced what was going on. She captured Killer Moth. 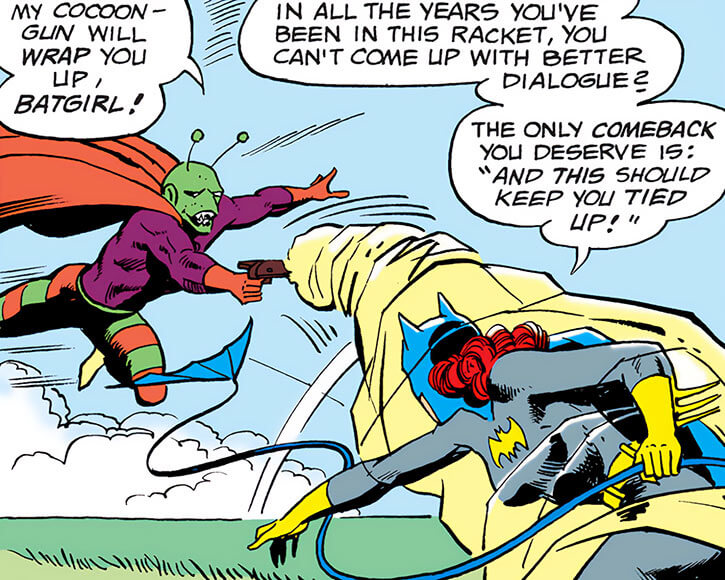 The Silver Ghost (Raphael van Zandt) hired a number of C-List villains to harass the Freedom Fighters. These all were from Earth-1’s Secret Society of Super-Villains :

The Moth and Quakemaster shot the Ray (“Happy” Terrill) out of the air. They mistakenly thought that they had killed him.

They then accompanied the Silver Ghost to take on the Human Bomb (Roy Lincoln). Killer Moth used a special adhesive for his cocoon gun, that neutralised the Bomb’s power. They took Lincoln down.

What happened next is unrevealed to my knowledge. This inventory story only was published in Cancelled Comics Cavalcade. 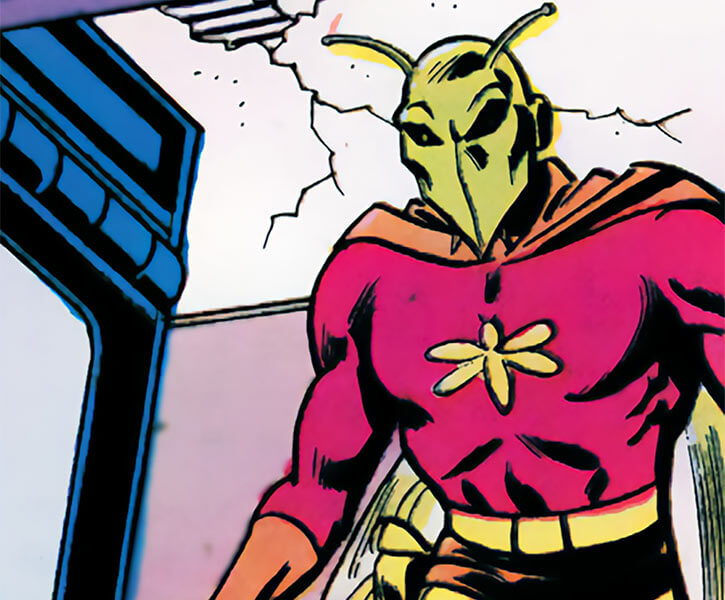 Wisdom of the crowds

Killer Moth stopped operating alone, perhaps because of the threat Batgirl posed. For the rest of his career, he was only seen among crowds of criminals.

For instance, the Joker once assembled a score of Batman opponents (including Killer Moth and the Cavalier) to kill Batman.

This task force operated in smaller groups. Moth, along with Clayface (Preston Payne) and Two-Face (Harvey Dent), was put under the command of the Gentleman Ghost (James Craddock). But they were defeated by Batgirl and Robin.

Not long after this incident, Ra’s al Ghul organised simultaneous mass breakouts at the State Penitentiary and at Arkham Asylum.

A dozen freed criminals, including Killer Moth, were led by the Joker in another revenge plan against Batman. Killer Moth’s contribution was limited to :

Killer Moth was an obscure member of the villainous crowd during the Crisis on Infinite Earths… and then reality was remade. 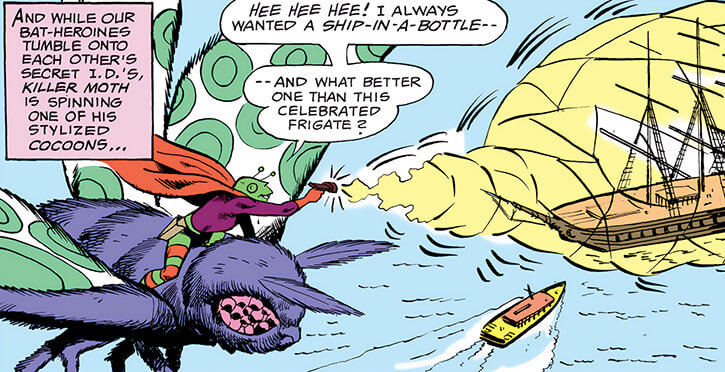 One gets the impression he’s in for the thrill and the respect. The Moth is always trying to set himself up as an important, feared master criminal – but actually achieves very little.

Next to nothing is known about his origin, civilian life, etc..

He’s but a gaudy costume with a general villainous role and whatever assets might be handy for the story to advance.

Then he gets defeated.

“You better stick to my knitting on that cocoon while my moth-mob rounds up Bruce Wayne !”

“How about putting your money where your mouth is ? I’ll bet you 10 grand that Batgirl holds the key that will unlock Batman’s secrets for us — and another 10 thousands that I get the info before you find out anything from Robin !”

(As he’s ordered to stop) “Ugh ! A moth-eaten command like that deserves a shot of my cocoon-gun ! Hee hee hee !” 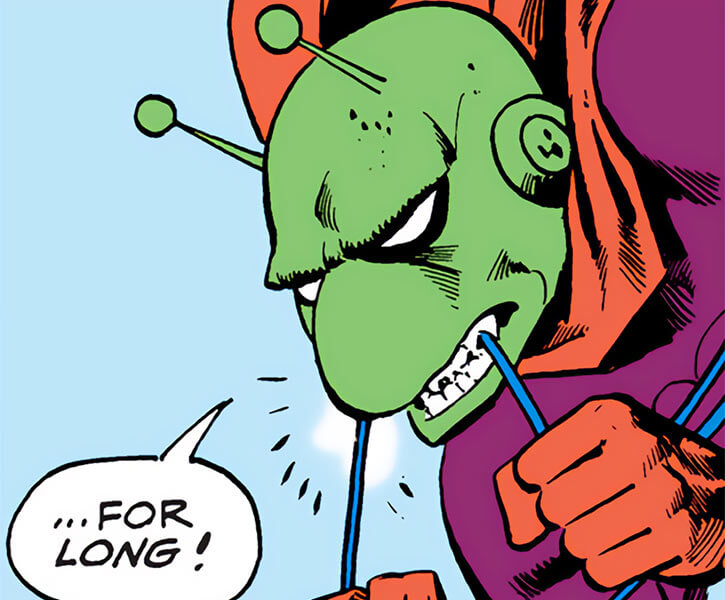 Strange Appearance (only whilst mutated). 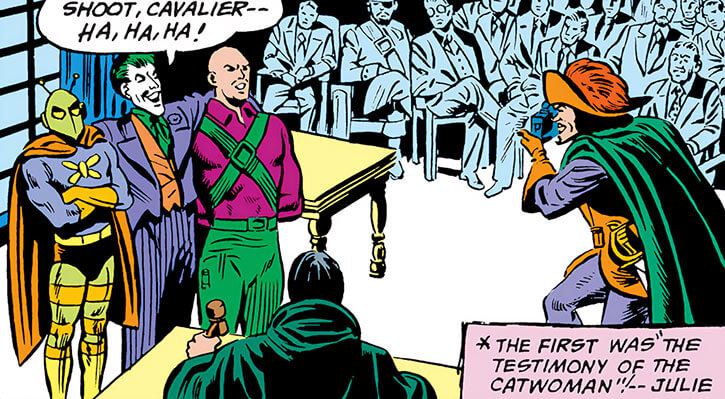 Killer Moth used a number of technological tricks once, so they can’t quite be considered a basic part of the character. 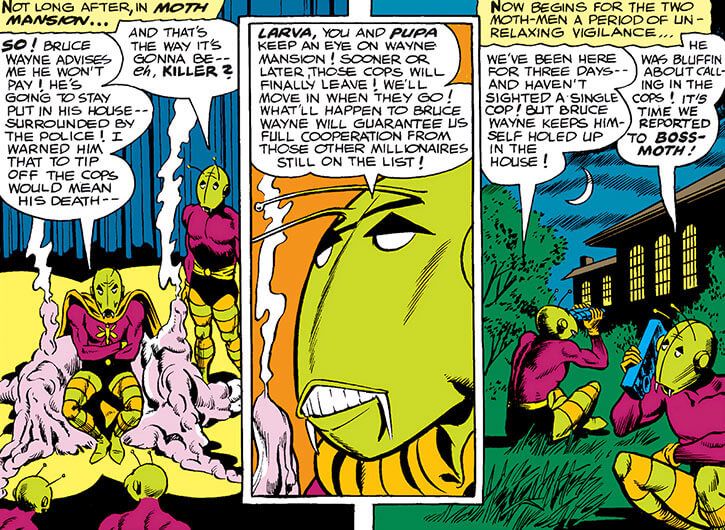 Killer Moth may or may not have occasional access to super-advanced illusion projectors [BODY 02, Illusion: 08].

The illusions seem fully real and interact with the real world (damaging walls, lifting people and putting them on a roof, snapping trees, etc.) until the projector is cut off. At which point everything snaps back to normal.

Despite the great power of this equipment it is seldom used. Heh, it’s not clear whether it even exists in the first place. Since it was once stated to be a power the Cavalier acquired.

It also seemed to degrade in quality as years went by, likely due to maintenance or power issues. The APs noted above are the highest, earliest value. 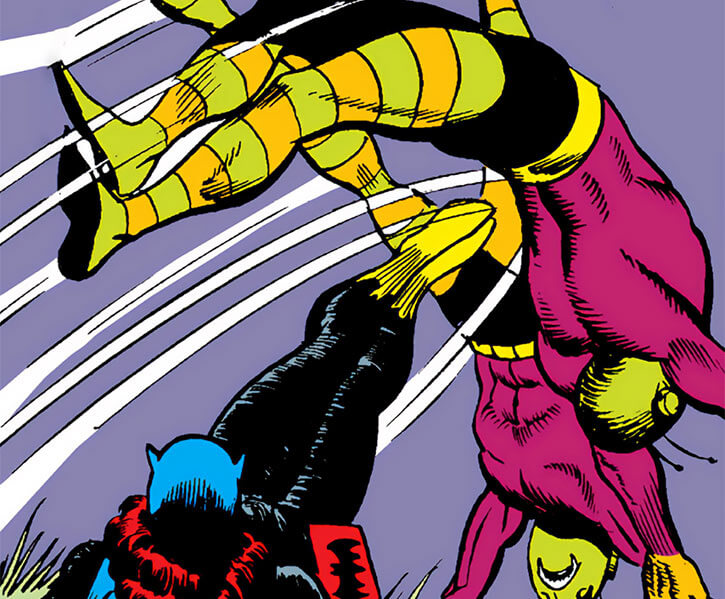 In early appearances, Killer Moth was accompanied by a few henchmen (the “moth mob”).

There were at least two such pairs of goons, though no code names were given for this second duo. Stock stats :