General Haifisch was a prominent officer of the German army during WWII. Apparently he was subjected to biological experimentations by Nazi scientists, for he possessed superhuman strength.

Haifisch underwent special training supervised by Adolf Hitler himself, and has been called “the model soldier of Third Reich”. Trained as a killing machine, he was code named the Killer Shark. Haifisch quickly became the leader for the Führer’s personal shock battalion, undertaking special missions.

While crippling partisans activity in a town on the Franco-Belgian border, Killer Shark and his men took all of the Blackhawks prisoners, except for Blackhawk himself. Blackhawk caught up with the submarine in which Killer Shark was transporting his men, and fought Killer Shark hand-to-hand atop the submarine after it surfaced.

Blackhawk finally knocked Killer Shark in the water, where the Nazi apparently drowned.

Of course, Haifisch survived. Post-Crisis, Killer Shark fought Blackhawk so many times that having him affected to a given sector was a pretty sure sign the Blackhawks would soon arrive.

The future of this past

Pre-Crisis, there was a second Killer Shark, a costumed pirate with numerous super-vehicles. His existence post-Crisis is uncertain, as he fought the Blackhawks well after the war.

A Killer Shark also resurfaced after Lady Blackhawk did.

Killer Shark would fit it real well in the 1990s Wolfenstein setting. 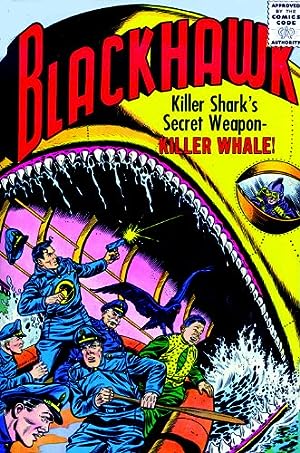