“Those who hunt by night will tell you that the wildest and most vicious of all animals is the tiny shrew. The shrew feeds only by the dark of the moon. He must eat his own body weight every few hours or starve. And the shrew devours everything. Bones, flesh, marrow. Everything. In March, first in Alaska, and then invading steadily southward, there were reports of a new species, the giant killer shrew.”

These creatures appear in the 1959 sci-fi horror film The Killer Shrews. Which is about a small group of people trapped on an island trying to survive a new species of giant shrew  .

It was a very cheap, fly-by-night, campy 1950s monster mash. But it met with more success than you’d expect.

In 2012, there was a sequel, Return of the Killer Shrews.

There also was a 2016 parody, Attack of the Killer Shrews. There has been occasional confusion between this one and the 1959 The killer Shrews (no “Attack of”).

They are the size of full-grown wolves with voracious appetites and a venom bite.

Being nocturnal, they avoid bright lights. They forage only at night.

They’re not climbers. Rather, they are digging animals.

A killer shrew’s saliva contains an extremely toxic venom. It can easily kill a full-grown man with a single bite. Even a scratch will kill.

When alone, the shrew can sit silent and still to ambush prey. But in a group, it’s in constant competition with others. They’ll charge headlong after the next meal. Quite terrifying to see them running full-tilt after you.

They breed within three weeks after birth. Birth cycles of 10 to 14 days. Their life-span is only one year. This allows scientists to get results over generations within a short period of time. This makes them perfect test subjects.

It also means their population will overhunt and outgrow an area in a few months. When food becomes scarce, the shrews resort to cannibalism.

Captain Thorne Sherman and his hired mate, Rook, brought supplies to an island. They were racing ahead of a hurricane.

As soon as they arrived, they were met with some haste by two men and a woman. One of them, Dr. Cragin, asked that his daughter be allowed to leave the island straight away. Thorne noticed one of the men was armed.

With the hurricane at his back, Thorne purposed to stay for a while. He began questioning the men. They were expecting some kind of animal invasion.

Thorne ordered Rook to strap on a pistol should he come ashore. Rook prepared the ship for the coming storm. Thorne went ahead with the scientists to investigate further.

The Killer Shrews uses the common horror trope of having a small group of people trapped someplace. Usually with some hope of rescue or escape in a given time limit. With anything from zombies, to dinosaurs, to cannibalistic hill-billies trying to kill them.

Thorne observed a new eight-foot (2.45m) wooden fence erected around the house. Cows, chickens, and a horse were kept nearby. The scientists were thus self-sufficient. 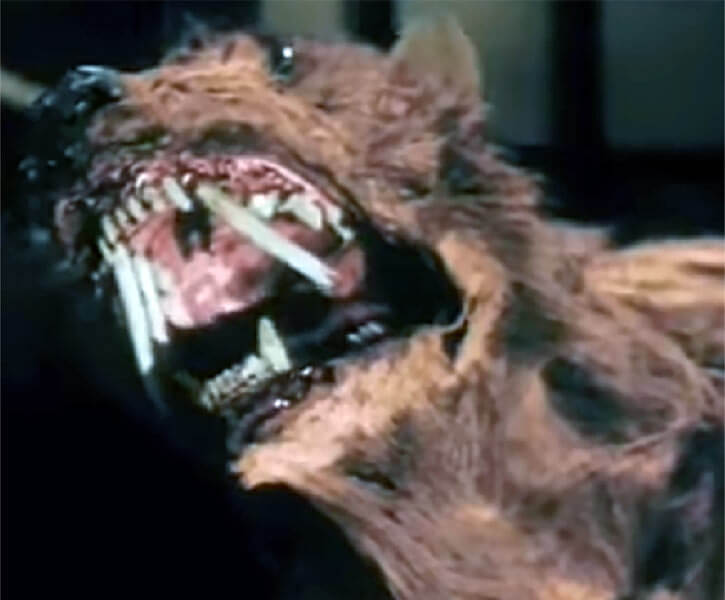 Their research concerned the problem of overpopulation. The idea behind the experiment was to control the animal’s size. Make it smaller. It would need less food to survive. It also would have an extended lifespan.

The island group consisted of:

Their growth was abnormal, and their appetite remained the same. With their ability to reproduce so quickly, there soon were 200 to 300 giant shrews loose on the island. They were nocturnal unless starving.

The power then went out due to the hurricane. However, the generator was outside the fence. The shrews dug into the barn and killed all the livestock. 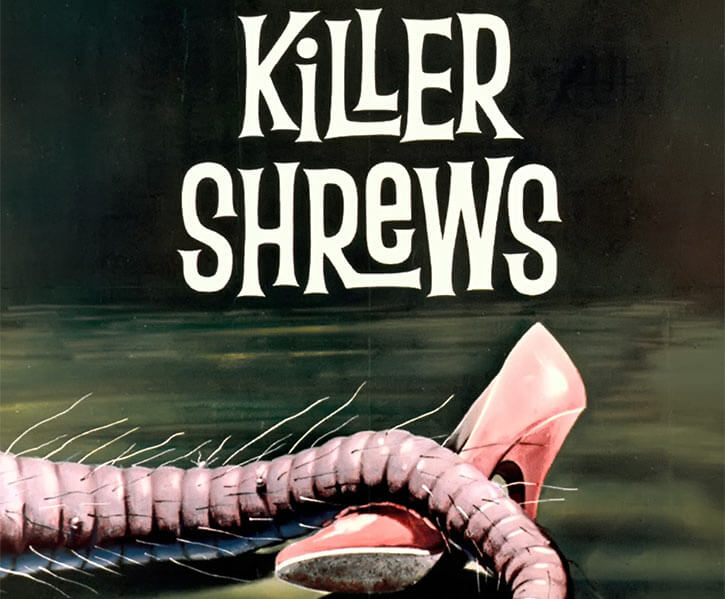 Thorne suggested the group go to the boat the next morning. Since shrews can’t swim. They would thus starve once the island was depleted of resources.

Each man took a turn watching while the others slept.

Ann called off her wedding to Jerry due to his recent ‘save my own skin’ attitude. Thorne and Ann were attracted to one another.

Near dusk and unaware of the danger, Rook was ambushed and overwhelmed by the shrews. No one knew he’d been killed. (So the movie gets its “the Black guy dies first” point — ed.)

One shrew got inside the house. It bit Mario on the leg before being killed by Thorne. Mario died on the spot. Tests later proved he’d been poisoned.

Weeks before, Dr. Cragin had concocted the most virulent poison he could. He had left it as bait to kill the shrews. However, the shrews assimilated the poison. It remained in the salivary glands.

More shrews got in. Thorne delayed them by closing every interior door. The shrews had to dig through the walls.

In the morning, Thorne and Jerry went to the boat. No shrews in sight.

A jealous Jerry threatened to shoot Thorne and leave him for dead. A short scuffle and Thorne came up with both pistol and shotgun.

They discovered the remains of Rook, and where suddenly set upon by shrews on both sides. They fled back to the relative safety of the house. Jerry got there first and locked the gate.

Thorne was able to scale the wall then beat Jerry unconscious. He came to his senses just before tossing Jerry over the wall to the shrews.

They’re coming out of the walls!

The shrews tore at the walls. One nicked Radford and he quickly succumbed to the venom. Jerry was in a panic.

How would they survive the horror of… the Killer Shrews? 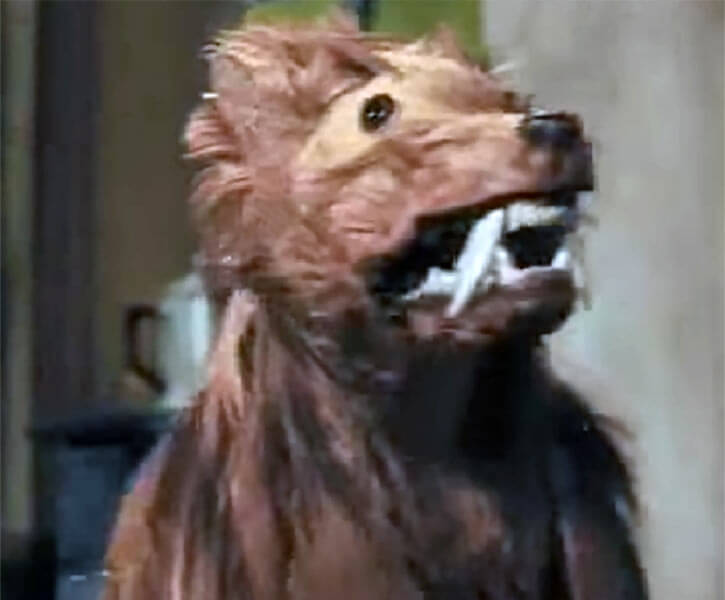 Looking something like German Shepherds with long-haired thick coats. They have a rat’s tail and heads with rounded ears.

Their snouts are elongated like a normal shrew, but this species has long fangs coming down well past the bottom jaw.

Forever on the hunt. Their only goal is to survive and propagate.

They did show some restraint realizing that if they hide, victims will leave safety and come out in the open. 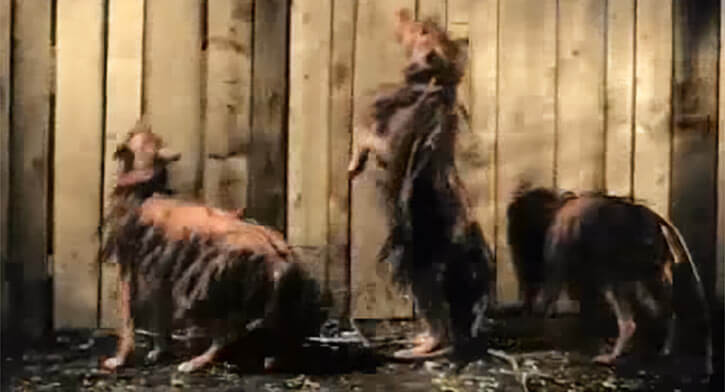 Dr. Cragin: “Six months ago, we managed to isolate the path to controlling size. Two litters are born. Six individuals, we kept for study. They were about the size of buckshot at birth. But the rate of growth was abnormal. They continued to grow. They were mutants. But they inherited all the negative characteristics of their breed. Somehow, they managed to escape. About a month later, we saw one of their offspring. They were multiplying. We did everything in the world to exterminate them, but – heh – no apparent luck. Then we haven’t seen any of them. Since daylight blinds them, and they — they forage only at night, unless starving. But the fact that two of them charged Ann and Jerry at the gate last evening indicates the available food on the island is nearing depletion.”

Thorne: “Doctor. That’s not the same animal you showed me. That’s a monster.”
Dr. Cragin: “As I said, they are mutants. In controlling the size factor, we seem to have crossed some of the other characteristics.”
Thorne: “Well, you certainly did a good job of it.”
Dr. Cragin: “I’ve known that for some time, captain.”

Pair them with someone with the power to control them. Like the Ratcatcher or Willard Stiles and the story writes itself..

Some inconsistencies with the Narrator’s dialog.

It’s probable the killer shrews have enhanced hearing but there isn’t enough evidence to add it.

They aren’t coordinated in their attack. But they still make use of Team Attack options only because individual initiatives line up as they swarm their prey in a frenzy.

It’s difficult to pinpoint the strength of the shrew’s venom. From the bite to the doctor declaring the men dead. It took less than a minute. I had both victims at BODY 03.

The doctor made the poison as potent as possible with what he had on hand. And indeed, all feared the venom bite. It’s clear, even a scratch will end a life. The largest animal killed was a horse (BODY 05). Poison Touch: 11 would kill a horse in a single phase.

Source of Character: The 1959 movie The Killer Shrews.