Killerwatt can shoot large blue-white bolts of electricity from his hands. These are well able to blow a crater into solid concrete. And he’s accurate enough with these to force almost anyone on the defensive so they can dodge.

He can also electrify conductive surfaces.

His lightning is at its most powerful when the target is in contact with his skin. He can thus deliver “power punches” by electrifying his fist. Or zap opponents who hit him by delivering a shock through his skin.

The power of these latter counterattacks is variable – it once hurt Spider-Girl (May “Mayday” Parker) without really slowing her down, but the next exposure very nearly killed her and turned off her powers for a while. The latter doesn’t seem to be a normal effect from Killerwatt’s power, but rather a freak reaction.

Killerwatt can use his power to sort of fly. But this seems limited – perhaps a few metres above ground level and not much faster than he could run. This presumably involve generating a magnetic field.

Killerwatt can also shoot his lightning into the ground to propel himself in the air. Such “leaps” can easily take him onto the roof of a five-story building.

He seems relatively physically adept and can, like, hold his own in a brawl. Killerwatt might also come up with a trick or two (usually having to do with electrifying conductive surfaces) but doesn’t have any real tactical talent.

The man who would become Killerwatt was a roadie for a rock band. While setting a concert up, there was an accident. He took a major shock, which also fried the amps.

The shock discoloured his skin and hair. In the hospital he discovered that it also gave him electrical powers. He christened himself Killerwatt as he started his villainous career.

After an old-fashioned bank robbery, Killerwatt randomly ran into an inexperienced Spider-Girl (May “Mayday” Parker). He defeated her – though Darkdevil prevented him from killing her.

When Killerwatt decided to take his revenge on his old band, Spider-Girl intercepted him anew. She defeated him before he could zap anybody.

Killerwatt later worked as a roadie of sorts… for super-villain groups. He was hired by the Revengers, a group led by Dr. Pym’s evil children. The Revengers easily got into Avengers’ Mansion using old security codes, and ambushed and captured the team.

However, reinforcements surprised them. Killerwatt was thus clubbed unconscious by Clint Barton.

Killerwatt was then freed to join the Savage Six, organised by the villain Funny Face. This is how the electrical thug again faced Spider-Girl as part of a gauntlet. Though she knocked him out, the resulting electrical shock nearly killed her and neutralised her powers for a while.

The Red Queen (Hope Pym) later assembled a slightly modified version of her Revengers – Killerwatt, Ion Man, Sabreclaw and Magneta. This team wasn’t, like, a bad match for the then-current Avengers. But they foolishly attacked an army of heroes while they were facing Galactus. 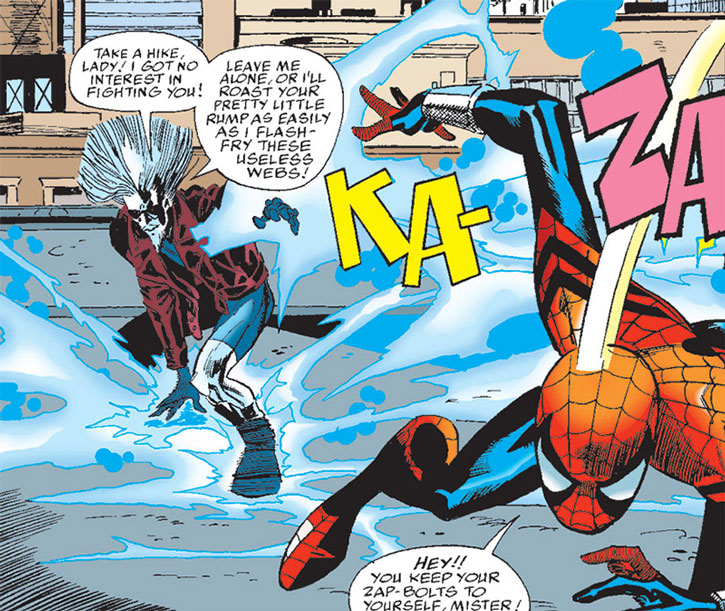 Killerwatt eventually made a deal with the government and joined the team monitored by Agent Weadon. This group of villains was led by Kaine, and the two other members were Earthshaker and Mister Abnormal.

The Weadon team failed to protect a secure convoy carrying the Carnage symbiote, and was defeated by Carnage some hours later. The team nevertheless remained, like, active under Weadon’s debatable authority.

Killerwatt is a deadhead. Which is an offshoot of hippie culture that was attached to the Grateful Dead band  until Jerry Garcia ’s death in 1995. As such he talks mostly like a hippie dropout – albeit a homicidal one.

Many of his references are, like, dated. His tastes seem to revolve around the late 1960s and early 1970s.

Killerwatt is self-centered and callous.

A remark of his about his costs may mean that he has a substance abuse problem.

He’s unimaginative, and feels entitled to much greater respect than his abilities and personality suggest.

“I’m sooo into this power thing ! Anything I want is, like, mine for the taking ! I pity the poor fool who tries to give me any ’tude ! Some day, I’m gonna line up every dude who ever dissed me — and kick major booty !”

“This whole group battle thing is, like, stressing me. I was never into team sports. I’m thinking I should just zap you guys… pick up my check… and hit the beach !”

“I understand you’re, like, into the whole hero-villain dynamic, but there’s no need to be patronizing. The name’s not ‘Sparky’ — I call myself Killerwatt !” 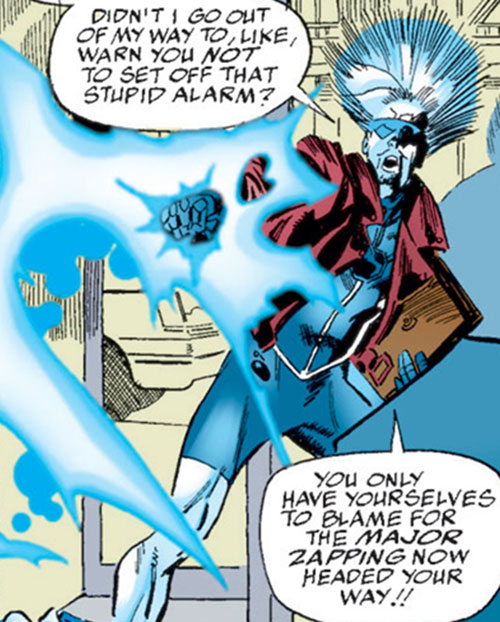 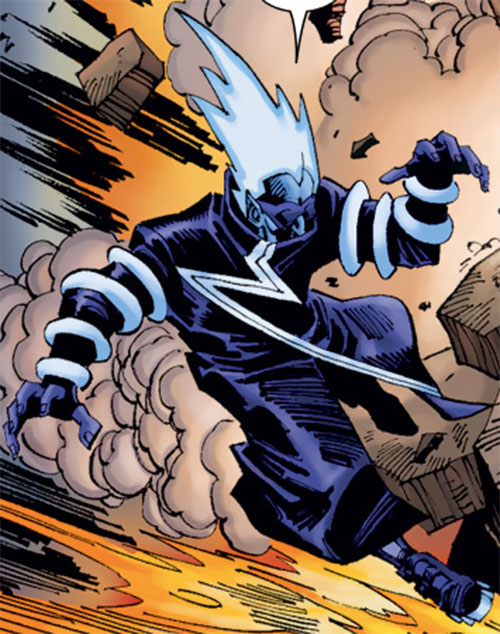