Final Fantasy is a loose series of role-playing video games. It is hugely successful and has come to embody the main Japanese school of CRPG  design. This profile is about the tenth opus, Final Fantasy X, which used much more modern technology than its predecessors.

If you don’t know about the setting, please read our primer about Final Fantasy X.

Kimahri is a member of the Ronso race. These are rather large catlike humanoids. Their society is mainly a hunter/gatherer warrior society that live in the mountains.

Ronso are much larger and much more muscular than humans and incredibly durable. However Kimahri is quite small for his race which has made him a sort of social outcast.

Apparently Ronso possess the ability to mimic the abilities of certain magical creatures that inhabit their world.

Ronso are fierce warriors that live for the glory of battle and have honed their fighting skills. Kimahri is no exception. Through his travels with Yuna as her Guardian Kimahri eventually becomes the most powerful (and later leader) of his race as well as a legendary Ronso.

An episode of Yogscast Rythian playing the remastered version of FFX. It’s a fair bit longer than the videos we usually post, but he does a good job.

Kimahri’s guardianship of Yuna began long before she officially decided to become a summoner. After departing from Mt. Gagazet in shame 10 years before Final Fantasy X began, Kimahri discovered a dying Auron who had managed to crawl all the way from the Zanarkand  Ruins while wounded outside Bevelle. 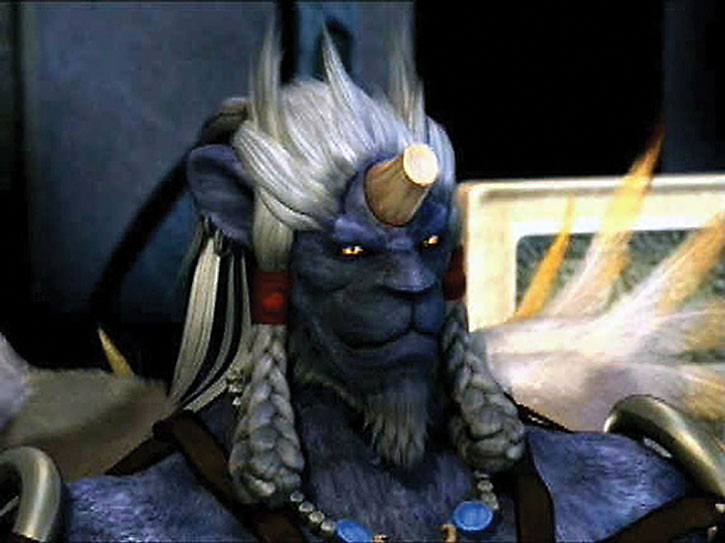 Auron told Kimahri about the daughter of High Summoner Braska, Yuna. He asked him to fulfill a promise Auron had made to Braska. The mission was to remove Yuna from Bevelle and transport her to the island of Besaid, where she may grow up peacefully.

Kimahri honored Auron’s request. He made sure that Yuna arrived at Besaid safely. When his task was completed, Yuna pleaded with him to remain with her, and he complied.

Kimahri’s main character growth occurs when he finally returns to Mount Gagazet. There he is confronted by rival Ronso Biran and Yenke in a 2-on-1 match to test whether he is worthy to climb Mt. Gagazet.

“I cried after we got to Besaid, too. When you tried to go after leaving me in the care of the temple… I held on to you, crying, ’Don’t go, don’t go !‘ And you listened, Kimahri. You stayed. Kimahri, thank you. Thank you so much.”

He proves his worth as a Ronso by defeating the two. Biran is proud to see that Kimahri surpassed him. Further, the Ronso then make a vow to stop anyone from the temples who pursued Yuna and her companions.

Unfortunately, Seymour a powerful unsent with the belief that peace can only be achieved in death is the one who follows. In trying to stop him, nearly the entire Ronso tribe is slaughtered.

Kimahri is a large blue furred white haired catlike humanoid. He wears little in the way of clothing, but what he does looks somewhat Native American. He is also extremely muscular. 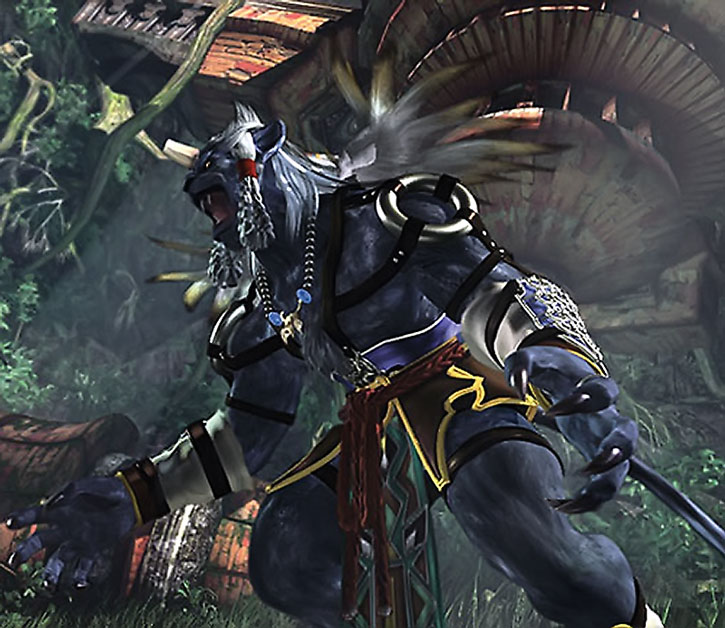 Ronso have a large white horn protruding from their forehead, but Kimahri;s gets broken during the story.

He doesn’t speak much and usually kind of stands around looking tough and intimidating.

Kimahri is generally a very tough stoic warrior. He normally prefers to let his spear do the talking. He is not a bully by any means (quite the opposite) he just comes from a tribal warrior society and believes that actions speak louder than words.

He is also extremely honorable in a tribal warrior sort of way. He is extremely protective of Yuna. It has been shown before that he is willing to lay down his life with hesitation to protect her from harm.

Garik: “Garik not listen unless Kimahri speak of Ronso future ! Kimahri unable to give answer he not have ! Kimahri not elder !”
Kimahri: “Silence ! Garik not think for himself ! Beg Kimahri for answer !”
(pause)
Kimahri: “Lian and Ayde make long journey. Find own path.”
Garik: “So, Garik must settle Garik problems ?”
Kimahri: “Wrong. Garik not alone. Let us think together. Kimahri is elder.”
Garik: “Elder is right. One Ronso problem is problem for all. All Ronso problem is problem for one.”
Kimahri: “One day Ronso path will be clear. This Kimahri believe.”

Rather than have Kimahri show up in the DCU it would probably be more interesting for the characters to encounter Ronso via some sort of dimensional  travel. A basic plot outline could be something like dimension hopping characters get stuck in the FFX world and encounter Ronso.

Ronso Rage Powers (powers fueled by Adrenaline Surge):
All of these powers start at 0 and can only be boosted via Adrenaline Surge and only up to a maximum of what is stated here.

I’m going to give FFX characters one more go before I give up so I thought I’d do the most minor PC because he seemed like he’d be the easiest. Boy was I wrong. There were some simple solutions for Lulu – there are none for this guy because his powers are just all over the place. 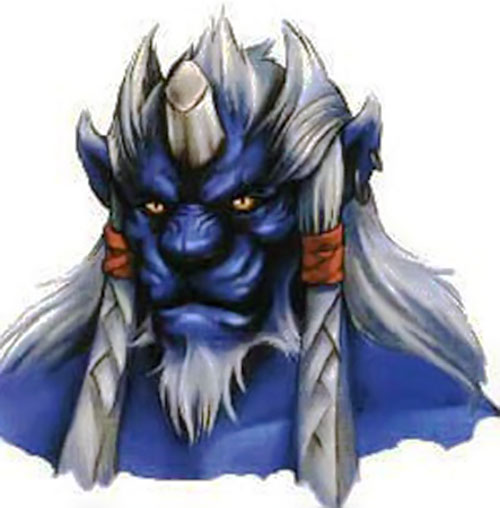 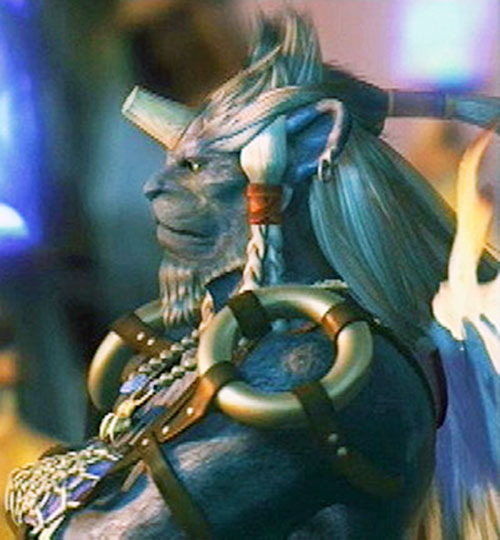 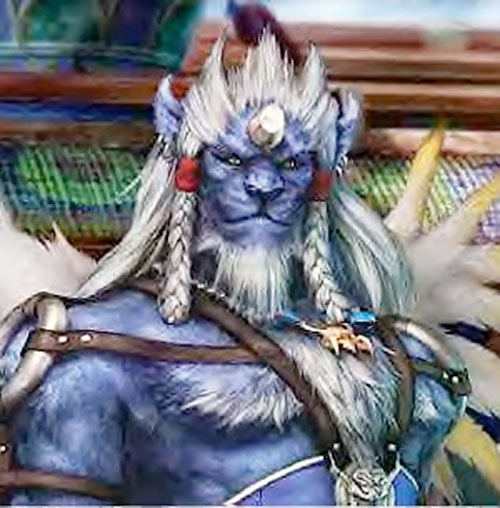