Kinnison is the human male penultimate.

He was the only human to receive additional training from Mentor, becoming the second Second-Stage Lensman.

Since I’m not going to spoil anything, I’ll just use the text on the back of GURPS Lensman as a general introduction to the series :

“Before the creation of the myriad planets of the galaxies, two worlds and two races were already ancient – and already locked in a war of extinction. Even the Arisian supreme powers of the mind cannot restrain the Eddorian lust for dominance. Quarter or compromise is impossible. The only possible outcome is utter, complete annihilation.

“The prize : the entire universe. The pawns of this final battleground : the young races of the galaxies – young races like humanity.

“But pawns can be promoted. The Arisians have forged, eon by eon, a weapon of prodigious power, a hammer of war to smash Eddore and rid the universe of their transdimensional evil.

“The Lensmen of the Galactic Patrol.

“Eddore, too, has its playing pieces, arrayed in a network of drugs and crime that riddles the galaxies. Their conspiracy has infiltrated every world of Civilization with tentacles of corruption and decay. Their reach is universal, their power all but unstoppable, their ruthlessness and cruelty absolute.

“Many lives will be lost – Lensmen’s lives. But Lensmen are responsible for the defense of Civilization itself. Lensmen always go in.

“Such is the Lensman’s Load.

“Welcome to the Universe of the Lens

Kinnison is an astoundingly competent man of stark willpower and great intelligence. However, his formidable drive tend to make him hot-headed. He’s a chivalrous man, reluctant to “make war on women”.

He has simple tastes : he reads (and sometimes writes) pulp  fiction, prefers plain food such as meat and potatoes, and swear like any old spacehand by Klono’s body parts.

This force of nature and stupendous intellect tends to be a bit abrasive at times. For instance he uses mildly derogatory nicknames for acquaintances.

“Such a bloated swine ; such a mangy, low-down cur ; such a pussy-gutted tub of lard ; such a brainless, filthy spawn of the lowest dregs of the rottenest scum of space ; such an utterly incompetent, self-opinionated, misbegotten abortion as you are !”

“Consider very carefully and very thoroughly an iceberg ; its every phase and aspect.”

However, they could be interesting as the *future* of the GLC. In this future, the new guardians selected during the Millennium crossover  have fused centuries ago and evolved into/opened a gateway/merged with the Arisian during the XXXth Century.

The Lensmen, complete with retrotech, could thus occupy the XXXII to XXXVth century period of the DCU. Their victory over Boskone explaining why the following centuries seem so peaceful in the known timeline.

Bonuses and Limitations:
Most Powers have greatly increased Range (esp. Telepathy, which has intergalactic range).

Drawbacks:
CIA to upholding the Gray Seal, SIA to impulsiveness and overconfidence.

By Sébastien Andrivet and Mark A. Ayen (adapting a GURPS writeup by Sean Barrett). 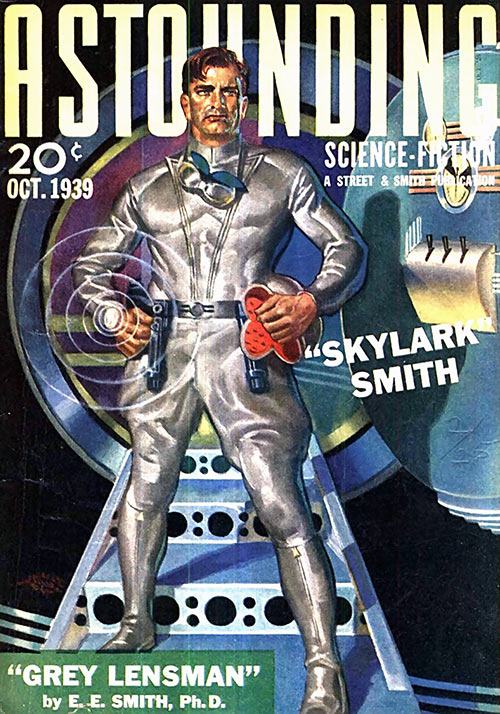 Fuller version of this famous cover. Click on the image for a larger version.