King Bee was the second supervillain-in-the-modern-sense who clashed with the Justice Society.

Unlike the Brain Wave (and the Psycho-Pirate, who followed him), King Bee didn’t stick. Unless you count the versions of Queen Bee as a successor, I guess.

Elmer Pane had experience as an exterminator of vermin. He also was a brilliant, self-taught entomologistA scientist who studies insects. and biochemist.

However, he seemed to have little opportunities to develop people skills.

One also gets the impression that his eyes were weak, requiring both a strong optical correction and protection from bright lights.

He could operate handguns, though he didn’t seem to be particularly accurate.

Mr. Pane’s big breakthrough was extracting “the insect hormone”. It could be used to turn men into insect or arachnid hybrids, with superhuman powers and an obedient (but simple) mind.

These mutates were too powerful for most mystery men of those days to handle directly. Superhuman heroes such as Dr. Fate, the Spectre, etc. could handle them fairly easily. But athletes in bright costumes had to avoid direct confrontation.

The King Bee later learned how to mutate himself to have fly wings, without apparent side effects.

These guys had termite-like heads, and their hands had mutated into pincers. They seemed silent and none too bright, but followed orders well.

Two such guys could slowly force open a bank vault, using their pincers and great strength. The door seemed to be about 12cm (4¾ inches) steel.

On the other pincer, Hawkman (Carter Hall) could punch them out without major issue.

They had a special backpack-and-hose that shot some sort of gunk to immobilise people. That worked even on Hawkman, but liquefied when exposed to extreme heat.

This paste may have been the same thing termites use for nest construction. If so, I’m sorry to say, it’s mostly faeces. 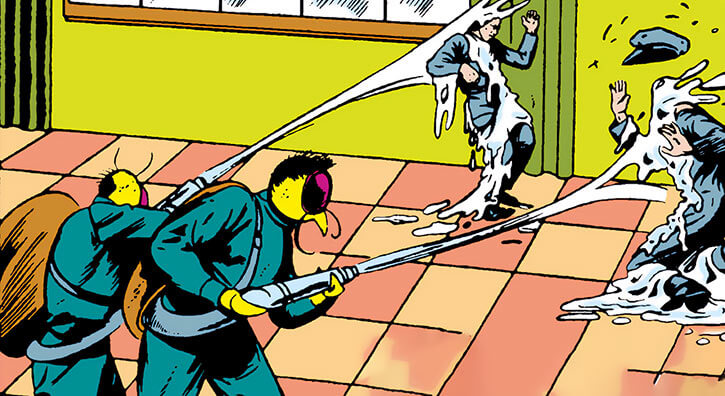 These guys had hairless, vivid pale pink skin. They could speak, albeit haltingly, despite their fangs.

Borers also had a shell on their back, looking like a snail shell.

According to the best experts in the field (such as Annabelle and Fatoumata, age 4, who like picture books about animals), snails aren’t insects or arachnids. Some hypotheses :

They could bore underground with ease, and even break thru most kinds of cement.

Borers could withstand punches from the Sandman (Wesley Dodds), unless he put extra effort into those. OTOH, they assumed that they were vulnerable to .45 ACP rounds.

These could swim at startling speeds, leaving eddies in their trail.

However, they had to be equipped with a helmet and air tank to stay underwater for more than a few minutes.

They likely had enhanced strength.

The leader was Chick Dempsey, a semi-famous swimmer desperate for a job. He still had his full mental faculties, but the other water bug henchmen were unquestioningly obeying him – all drone-like.

These guys had hornet wings.

These seem assisted by a sort of backpack with coils and motors. Logic suggests that this equipment allowed them to fly much higher than would otherwise be feasible.

They only ever said “ssss”. Though it might simply be because they wore 1940s rebreathers.

There seemed to be eighth of these, sometimes operating in two teams of four.

Spider men, do whatever a spider can.

These hairless, beefy guys are superhumanly strong. One can crumple a 1940s police cruiser like an accordion, and two can rip smaller 1940s bank vault doors off their hinges.

One statement is that they can lift a locomotive – about 100 tonnes back then. But it’s unclear whether it was one guy or several.

“Class 15” or — more likely — “Class 20” is a reasonable estimate. And so it was six or five guys who stole that locomotive.

They are surprisingly fast, and adept climbers.

The ant-men received their orders by radio – their headbands and antennae are receivers. They always repeated their orders aloud, and seemed rather dim. For instance they’d obey whoever was talking through the radio emitter.

These of course could leap over fairly tall buildings in a single bound. And travel surprisingly long distances via tireless hopping.

They were strong (especially their kicks), durable and fast. Their skin seemed to have chitinous properties. Even the Atom (Al Pratt) thought that he wasn’t strong enough to fight those guys.

However, they had a high metabolic rate. If they exert themselves for too long, their hunger would lead them to devour a good chunk of the nearest farm field.

Fly-men could walk on walls and ceilings. They could also, well, fly.

King Bee’s lab was also protected by three mutated attack dogs, with more than the proportional strength of an ant. So perhaps a bit under “Class 10”.

During the 1930s, Elmer Pane was a freelance vermin extermination contractor.

Fascinated by insects, he also maintained entomological habitats in his home.

However, his unusual appearance and unimpressive physique made him a target for ridicule and bullies. It also made it difficult to make sales as he went door-to-door to offer his services.

Humiliated, Mr. Pane wished he was strong enough to beat bullies back. He started working on a way to endow himself with the proportional strength of an insect.

His research produced an edible that would endow a human with the abilities of an insect species.

However, it also made the person with these abilities simple-minded and obedient. And by this point, Pane had ten bucks left to his name.

Mr. Pane therefore contacted the mob as “King Bee”. He offered them the services of his insect-men for their jobs, against ⅔ of the income. Since his mutates clearly had scary powers, this was a success.

After several such partnerships, the King Bee was wealthy. He had a top-notch research lab built deep within a forest, perhaps in New Jersey.

However, a series of spectacular operations brought him to the attention of the Justice Society of America.

As usual, the JSAers split up to address eight different schemes. Each was run by King Bee in partnership with a different mob, using a different kind of insect mutate.

In the end, the entire team converged on the King Bee’s lab.

Johnny Thunder’s Thunderbolt easily disposed of the mutated guard dogs, and Pane was quickly arrested. Browsing through his research papers revealed the means to cure his mutates.

In 1947, King Bee and his cell mate the Sky Pirate were freed by Per Degaton.

Both joined his team, which then proceeded back in time to December 7, 1941. Their other colleagues were :

The idea was to leverage the Pearl Harbour attack as a diversion, and storm the US from another direction.

There’s no reason to think that King Bee didn’t exist during the 1940s of the DC Universe. After whichever Crisis is current as you read this. 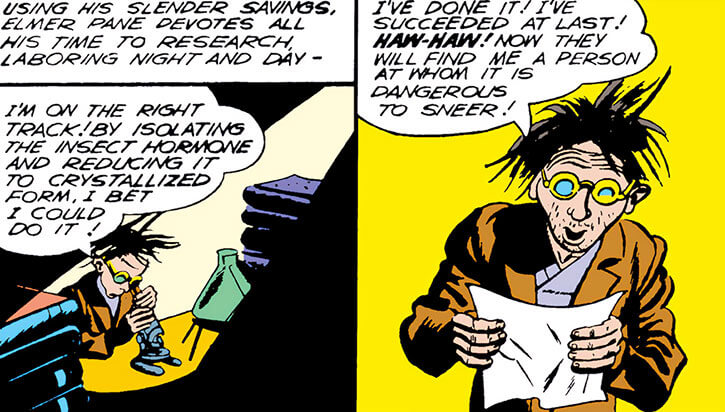 The costume was only worn as a Per Degaton operative. Otherwise, he had ordinary clothing – and wasn’t personally in the field anyway.

If you’ve always fantasised about introducing certain Marvel characters in the 1950s DC Universe — which you’ll have to admit is niche, but I’m not judging — then here’s your guy.

Spider-Man, the Wasp, Ant-Man, the Scorpion, etc. and even Red Circle’s Fly are trivial to introduce via the King Bee.

This guy never made any impression, and even Roy Thomas disposed of him within a few panels. So his Attributes are clearly lowballed.

Especially his Mysticals, as everyone just kicked him around and distrusted him.

With his fly-like wings he perhaps had Flight: 06. Since he wasn’t wearing a mask or any other high-speed flight equipment.

What his handgun did is unrevealed. 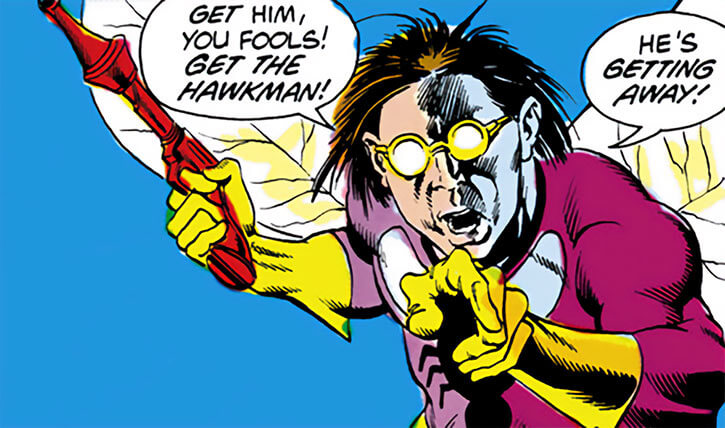 The very-briefly-seen costume, wings and handgun.

They generally had beefy thugs stats. But they have been reduced to INT 01 WIL 01, with a SIA toward obeying their orders.

Another issue is that some of the mobsters they worked with were scared of them. One crew even tried to eliminate their insect mutate allies once the job was done, out of fear and disgust.

Flight APs are high enough to allow them to intercept a Douglas DC-3  .

There just isn’t any usable data in the story.

Fly guys, no one can deny

They’re seen for but one panel. Perhaps large dog stats without Shrinking, DEX 04 STR 08, Claws: 10, Running: 06 – or something like that.