The mayor of Capital City had four statues erected in various points of the city. These were stone statues of Superman, Batman and the Flash, plus a gold statue of Wonder Woman. The latter looked about five meters tall. I’ll let you calculate the weight of gold that went into this, even if it’s just plating.

Angry, the King of Crime wrote the mayor, telling him he intended to destroy the Superman statue. He even gave him the date and hour… and the Air Devils arrived right at the announced time, attempting to bomb the statue to smithereens. They were stopped by Wonder Woman, as planned. She arrested two of the Devils, and the rest fled.

Then the King wrote when he would destroy the Batman statue, and the Air Devils attacked. Wonder Woman again stopped them before it was too late.

But it was actually a startlingly clever ruse from the King of Crime. As she was distracted, the King was stealing the priceless Wonder Woman statue ! He also kidnapped Steve Trevor, who was conveniently guarding it “for sentimental reasons” (creep !).

However, Wonder Woman cunningly saw through that ruse as she… well, simply stumbled on the King’s plane while flying. She followed them to his hideout, but the King had strapped explosives to Trevor. He threatened to detonated them if she got any closer. Utterly defeated, WW went home to play football.

As the football match was over, a meteor shower was announced over the area. Cleverly disguising herself as a meteor, WW crashed on the King of Crime’s island. Emerging from the aerolith, she swiftly lassoed the detonator off the King of Crime’s hands, thus defeating him. Ola !

It’s all in the quote, really. His men treat him as if he were actually a mighty and unquestionable king.

“Now you will land and learn of my battle plan ! To destroy the statues of Superman, Batman and Flash set up in different locations all over Capital City ! I shall show the world that I, the King of Crime, is the one who should be honored — not that collection of comic characters !”

The Air Devils are a half-dozen pilots with jet fighter-bombers. They are pretty good pilots. 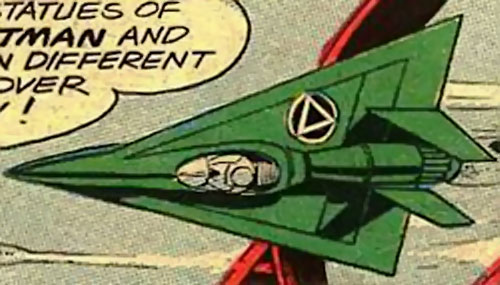