King Mob is a master of words and has a real knack for persuading people, either by speech or by violence. Everybody always seems to think he can handle anything and that he knows how to do everything.

This is, rather often, quite true, as King Mob is an expert occultist, driver, armed combatant, acrobat, demolition expert and accomplished thief. He is also a master of the unarmed martial arts of Silat. He has a strong presence which makes him the natural leader of most groups.

The Invisibles are an ancient and secret network of freedom fighters dedicated to the liberation and evolution of Humankind. Some work alone – paranoid agents on the fringes of sanity, stumbling in rags down city streets. Others aid the cause without ever knowing – rebellious schoolchildren and mutinous wives, workers driven to sabotage the lifeless mechanisms of production and consumption.

And others still, like King Mob and his team, gather in activist cells. They use direct action to strike back at the power structures of the Archon conspiracy.

Anarchists, witches, outcasts, occult terrorists, ordinary people on the front lines of the Final Battle to decide the fate of the Soul of Humanity, they oppose tyranny and ignorance. They refuse to be governed. They are humanity’s last hope in the face of the ultimate, never-ending nightmare. The choice is simple and final: timeless freedom or eternal control.

In his local cell, King Mob has long been the leader and the air of the group, and has recently switched to becoming earth. Joined by former comrade Jolly Roger, he continues to fight for freedom with the Invisibles.

King Mob wears bizarre leather clothing and often shows a lot of skin. He has lots of piercing in the ears, nose, lips, and probably other body parts as well. He often wears red, round sunglasses and always carries a gun at the back of his belt.

King Mob’s built is slender with well developed muscle tone. He is also often seen wearing some rebellious symbol, like a Che Guevara T-shirt . He is an amazingly dexterous combatant and gives a very nasty, but charming impression.

King Mob is the ultimate conspiracy’s ultimate conspirator. He is a high-spirited anarchist while at peace with himself. He is an excellent and confident leader with straight-forward attitude and macho lifestyle. He’s also an excellent orator and is the type of guy to defeat an opponent with mere words.

He is a devoted Christian, but also believes in and prays to Ganesha, the elephant god, before any big venture.

King Mob practices yoga, meditation and psychedelic drugs and likes to cite literature. His attitude is extremely cocky, but also extremely charming whenever he wants to. When on a mission he kills remorselessly while giving immensely brutal comments and puns. This usually results on him going on ’kill overload‘, as he calls it, and feels a bit sick about it afterwards.

While at missions he also always sprays his name on various walls. Paradoxically, he also has a big heart which can cry deeply for the victims of injustice.

“Nice and smooth.” (with a small smile)

“Chaos sneaks in every time.”

“Christ ! You shoot a few people and everybody thinks you’re James Bond !”

The Invisibles is set in one of the Vertigo sub-universes of DC comics, and are likely to encounter the likes of John Constantine, the Swamp Thing, the Sandman and other Vertigo fame.

Bonuses and Limitations:
Iron Will has a Catastrophic Power Burnout (-3) and is Fatiguing (-1).

Drawbacks:
MIA (Spraying his name on walls when on a mission), Secret Identity.

King Mob has access to a great number of Tantric rituals (for which he may use his Scholar Advantage) including: 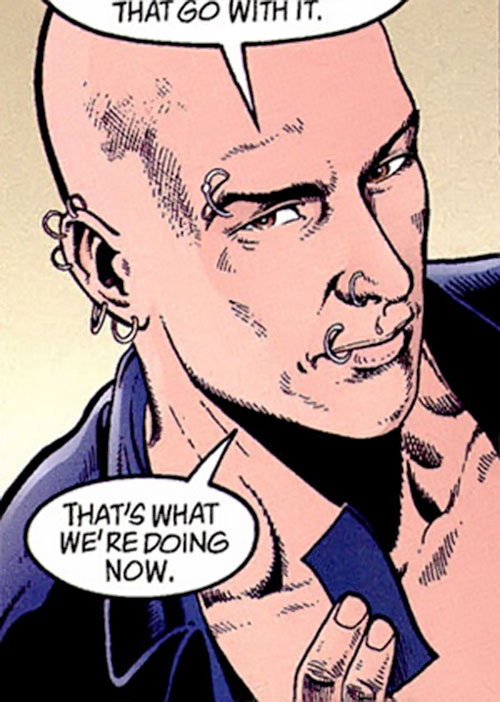 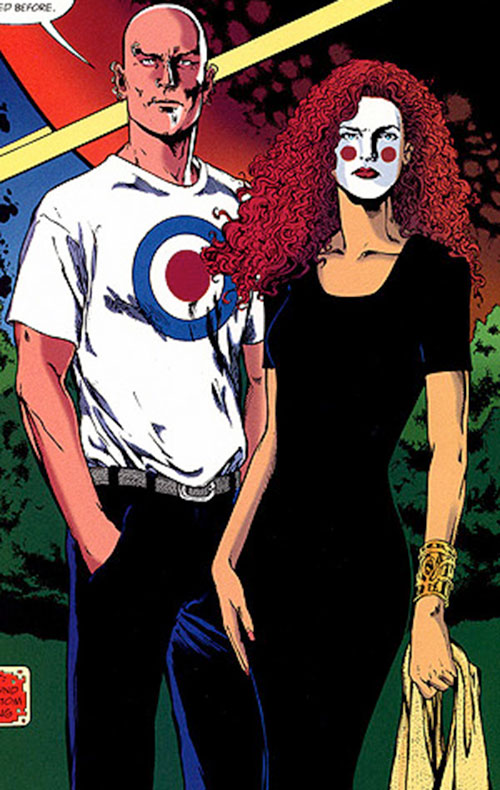